At the Spiritual Science Research Foundation a large part of our research is focused on understanding the effect of our day-to-day choices and activities, on our spiritual well-being. Due to a lack of knowledge about the spiritual dimension, people follow the next big fashion or fad without understanding its implications at a spiritual level. In this section, we will be focusing on highlighting various popular activities of people that increase the spiritual impurity in themselves and the people around them. As a result of indulging in such activities, people also run a higher risk of being possessed by negative entities. More often than not, negative trends that get a huge public response and are rapidly embraced around the world are in fact instigated by people who themselves are possessed. Powerful negative energies work through people they possess to start weird customs, fashions and trends as a means to increase the spiritual impurity in people and society. Accordingly negative energies increase their ability to possess and control people and society. 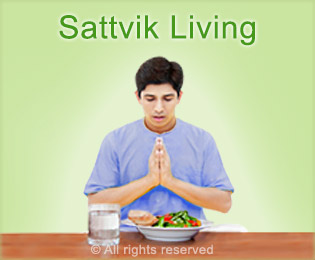 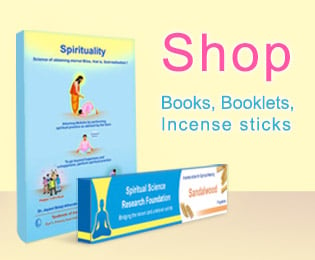 Influence of negative energies on the behaviour of society

There are many trends and behaviours that have been directly or indirectly influenced by negative energies. Every such trend and behaviour carries with it a host of negative impacts at a physical, psychological and spiritual level. In the following table we have elaborated on the main aspects of the negative impact. The severity of the impact will vary according to the trend. By understanding that such acts are harmful to both you and your close ones, we can make changes in our lifestyle to eliminate them.

Teenage years are the formative years in a child’s life which is marked with high energy levels. Given the negative practices prevalent in society, teenage smoking is on the rise. What’s more daunting though, is, that once a child or a teenage boy or girl, does get into this vicious cycle, the attempts by parents and health professionals to help wean them off this habit have quite often been futile.

Is graffiti art or vandalism - a spiritual perspective

Art forms have drifted away from main stream and taken the shape of contemporary modern day art. Under the lieu of abstract art forms, art has digressed paving way for vandalism. One such practice is graffiti. The very design attracts negativity and also spiritually pollutes the surrounding environment by constantly emitting negative vibrations.

Why not to get dreadlocks - a spiritual perspective

Often referred to as ‘neglect’, ‘natural’, ‘organic’ or ‘freeform’ method of growing hair – dreadlocks are becoming widely accepted. This matted hair look, which in most cases is formed intentionally, becomes a storehouse of negative energy. Also, as hair innately has higher levels of Raja-Tama component, having dreadlocks can prove very detrimental.

Fashion shows have become a rage especially amongst the younger generation where they are completely enamored by the fashion trends and try replicating the same for themselves. However they fail to understand how this can lead to being affected negatively.

Generally accompanied with a carnival atmosphere, techno parades and rave parties are one of the most sought after events. Thousands of people throng the venue dancing and singing to extremely loud music. This tamasik music attracts negative forces that negatively influence the people participating in the event and the overall environment.

This naturist philosophy which started as a movement ‘going back to nature’, ‘expressing freedom’, ‘being healthier’ is gaining ground and in several countries bathing in the nude in the presence of other nude people in public is becoming commonplace. How does this practice affect us at the physical, psychological and spiritual level?

Righteous conduct and self-restraint are concepts which are progressively on the decline. Kissing in public is just another example. It is felt that such practices embark upon a very liberal lifestyle and attitude; however the very act when done in public places evokes promiscuous thoughts in the minds of onlookers and the people kissing incur sin.

The extremely detrimental effect of wearing clothes and accessories with skull designs is discussed in this article.

Spiritual effect of the zombie walk

Zombie walk entails an organized public gathering of people who dress up in grotesque costumes. People communicate in a manner that is consistent with zombie-like behaviour, which includes grunting, groaning or slurred moaning types of noises. Besides adults even children are seen to participate very actively in the event. This festival of infused with negativity and devoid of Divinity.

Celebrated on 31st of October every year, the Halloween festival is now a community event in which we try to explore the supernatural or the darker side. To most of us Halloween means demonic jubilation. Amidst the hoopla, we are unaware of how these mere fun activities entrench us into something much more sinister which have long lasting and serious implications. Through the festival we are dabble with very powerful negative forces which we do not understand and quite often cannot combat.

How to celebrate one's birthday ?

This article explains how negative energies can influence when we celebrate birthday by cutting a cake and blowing a candle. While how spiritually pure vibrations are attracted when a lit lamp is waved around the person whose birthday it is.

This article explains how negative energies can become more active when a candle is lit and their influence is nullifies when we light a ghee lamp. This has been studied using electrosomatographic technique.

Tattoos are a statement of individuality which congregate his or her belief, likes and dislikes; aesthetic, ethnic sense. However, the damage caused at the spiritual level is even greater when one adorns a permanent tattoo.

Body piercings - effects of piercing the nose, ear and other parts of the body

Spiritual effects of television and movies

Why do people watch TV? SSRF explains the spiritual effects of television and movies, as well as how TV genre affects the viewer and environment.

What is the effect of swearing at the spiritual level? Depending on what we say and how we speak, softly or loudly, we attract positive or negative energy.

How do negative energies influence our thoughts ?

Negative energies try to give negative thoughts with strong intensity and due to the recurrent nature of such thoughts laden with black energy; the person is compelled to act upon it. Unfortunately we are not able to differentiate between the thoughts given by them and the ones coming from sub-conscious mind. Only when we perform regular and consistent spiritual practice we are able to understand and curb such thoughts. 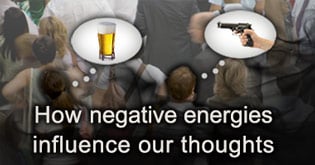 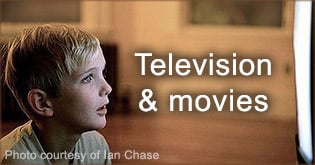 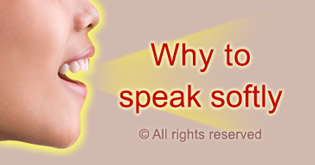 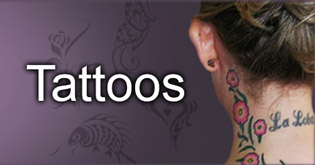 In the world that we live in, there are many such trends and behaviours which emit very negative vibrations and yet have been adopted by large sections of society. In order to be able to decipher what is a correct behaviour one needs to do spiritual practice.

Only when we do consistent spiritual practice, the hold of negative energies on us begins to reduce and with increased spiritual practice we are able to completely get over it. This is the only everlasting and permanent cure.

Chanting God’s Name as per the religion of birth creates a protective sheath around us that wards off any attacks by negative energies.

Salt water remedy is a simple yet potent healing remedy which helps to remove the black covering created by negative energies. Rock salt and water together have the spiritual properties to such black energy accumulated around one’s body during the day and destroy it. Swati was able to overcome distress due to negative energies through spiritual practice.

This is a case study of a different type of spontaneous combustion.

Learn how negative energies constantly put obstacles to deter seekers and cause obstacles in their spiritual practice.

Luis was plagued with sexual thoughts but he overcame them through spiritual practice.

Derek was able to come out of acute depression, caused by negative energy possessing him. Dance is a worldwide phenomenon that has touched all our lives. In this video, we explore how dancing and common dance movements impact us at a spiritual level. In this video, we study the difference between dance under the influence of negative energies and spiritually pure dance movements. In this video SSRF shares its findings on the spiritual effects of alcohol gained through this research, as well as through spiritual research. How does Halloween actually affect us at the spiritual level? Why we should not celebrate Halloween? How negative energies affect us before, during and after Halloween? Learn how the subtle world influences the Earth plane. How do we define Negative Energies (ghosts, demons, devils, etc)? Understand why there has been an increase in natural disasters and other unnatural phenomenon along with a rise in social issues in current times. The one common aspiration that links each and every human being, regardless of faith, gender and social or financial status is the desire to be happy. Negative energies are causing many changes in the environment. One of them being dust storms which have been very frequent.

The impact of negative energies is very high on an eclipse. This blog discusses what precautions we should take to protect ourselves from the spiritual detriment which an eclipse brings about.

World War 3 is coming - are you prepared?

Powerful negative energies influencing people and instigating terrorism. Also through natural disasters they will be unleashing unprecedented destruction. What can we do to face the impending dreadful times?

This blog explores the academic and spiritual research done on sleep paralysis.