1. Introduction to the influence of negative energies causing negative effect on society

Whichever era one lives in, one is conditioned by the norms and behaviour of society. A person’s upbringing is a powerful influence on how he or she views the world. It shapes one’s mind with regard to what is acceptable and unacceptable as a behavior or a norm. As one goes to school and later with the onset of adolescence, teachers and peers begin to exert an influence in shaping how we think. In short the behaviours, traditions and norms we grow up with, become the status quo in our lives. If one’s parents do it, and friends do it and society embraces the general thought process, then one is most likely to think that it is okay. People generally do not question the negative effect of a norm — let alone the spiritual effect of a norm. 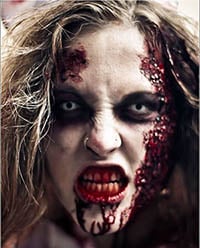 Take for example zombie walks, a social event that started in the early 2000s and which has now grown into having a cult like following in various cities around the world. Parents parade down the street (with their children ) with fake brains sticking out of their heads and fake blood oozing out of their children’s mouths. It’s a morbid family event and the children of today will grow up thinking that this is an example of a fun event. They will teach the same to their children as they know no better. Over time, such a tradition gains strength and becomes accepted as the norm however spiritually detrimental it may be, thus causing negative effect on the society.

2. Inadequacies of modern education and people’s ability to perceive the subtle

Our modern educational system does not teach students to understand the positive or negative effect of what they do and to think at a subtle level. However through spiritual research, SSRF has observed that the subtle impact of such behaviours and practices can exert its negative effect, for a period of time, which extends well beyond the time the physical effect wears out. Society at large has lost their ability to view things and events at a vibrational level and as a result, people chase the next wave, trend or behaviour without stopping to see whether it could be spiritually detrimental to them and their families and thus causing negative effect on the society. At SSRF we have stressed the fact that negative energies or demonic entities affect and possess people for various reasons. The spiritual law here is ‘like attracts like’. Any event, practice, behaviour or norm that emits negative or distressing subtle vibrations is likely to attract negative energies from the spiritual dimension. Negative energies have to expend less energy in order to affect or possess a person who is enveloped in distressing vibrations due to his or her behaviour or actions. Quite often negative energies put thoughts in people’s minds to start such negative trends or behaviours so that they can capitilise on it and affect society.

3. Rapid increase of negative trends and behaviour has caused negative effect on the society

Over the last half century, the world has witnessed a rapid increase in trends and norms that emit distressing vibrations. As a result, negative energies have capitalised on such trends and increased their stranglehold over society. Negative energies often manipulate people’s thoughts and behaviour to suit their demonic intentions. Celebrities who start or endorse fashion trends are often targeted by negative energies. This is because when such people are under the control of negative energies they can become powerful champions for such negative trends to gain worldwide attraction.

In this section of the SSRF website, we discuss various such negative trends prevailing in the field of art, business, clothing, drinks, family, hair, health, lifestyle, and society. We have also discussed some of these negative effect and behaviours in more detail to enable our reader to understand the various negative aspects that each of these acts have.

4. Negative Effect of trends and behaviours

Every such trend and behaviour carries with it a host of negative effect at a physical, psychological and spiritual level. In the following table we have elaborated on the main aspects of the negative impact. The severity of the impact will vary according to the trend.

There are many trends and behaviours that have been directly or indirectly influenced by negative energies, thus having a negative effect on the society. We have provided some of them in detail as mentioned above. The rest of the topics we have just listed to give you an idea of the various trends which are harmful from a spiritual perspective.

By understanding that such acts are harmful to both you and your close ones, you can make changes in your lifestyle to eliminate them.

We have provided information on how to overcome the negative effect of such trends in the article – Spiritual solutions to protect oneself from the influence of negative energies on society.