Life after death: Where do we go after we die, and what happens in the afterlife?

The innumerable recorded and researched cases of past life experiences clearly point to life after death. Various institutions have performed research about the afterlife, near death experiences, or about consciousness after death, finding proof that life continues after death. There have been many cases of near death experiences where people have had an encounter with the afterlife, such as ‘seeing the light‘, or meeting their loved ones who passed away. In all the recorded cases of reincarnations, it was also found that after death and before next birth on Earth, there was a variable time lag.

So, where do we go after death till our reincarnation on Earth?  What is life like in the afterlife? Is there a single plane of existence or are there a variety of planes of existence?  If so, what are the factors that decide where we go after death? In this article, we present the answers to these and other questions about life after death. These answers are obtained through spiritual research done by seekers of the Spiritual Science Research Foundation (SSRF) with highly developed sixth sense (ESP).

1. What happens after death?

Spiritual research has shown that man is comprised of the following four basic bodies:

The picture below is a diagrammatic representation of what a human being is comprised of. 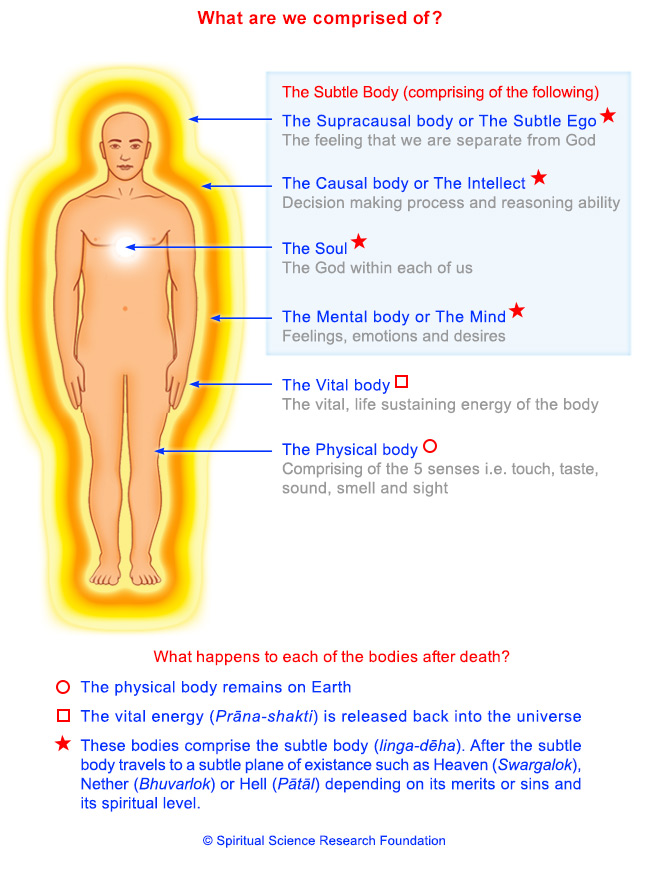 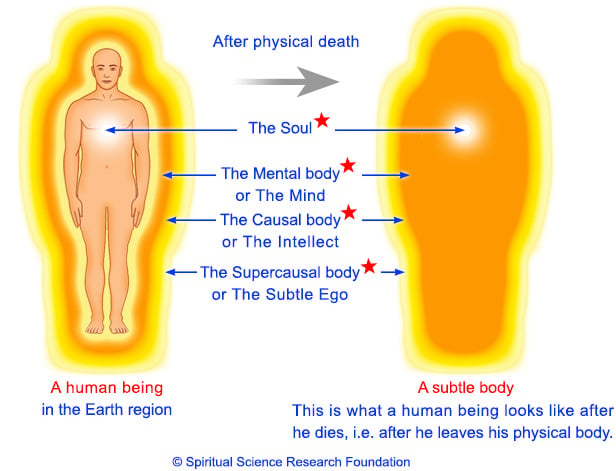 2. Where we go after death: 14 planes of existence in the Universe

There are 14 main planes of existence in the Universe. Seven of them are positive and seven are negative. The seven negative planes are commonly known as Hell (Pātāl). There are numerous sub-planes within these main planes.

The Earth plane is the only physical plane of existence in the Universe and is also the first one in the hierarchy of the positive planes in the Universe.

Seven Negative planes of existence: These are occupied mostly by subtle bodies after death that have done unrighteous deeds and are engaged in spiritual practice according to the negative path. By negative path, we mean the orientation of spiritual practice is towards attaining spiritual power, e.g. supernatural powers. This spiritual power is primarily used to enhance one’s control over others or for negative purposes. Thus all subtle bodies that go to any one of the planes of existence of Hell, by virtue of their evil intentions become ghosts.

Refer to the article on, ‘What is a ghost’?

The diagram below shows the 14 planes of existence in the Universe.

2. The Nether region (Bhuvarlok) to be precise is a region that is aligned away from God. We have however depicted it as a positive plane as after death, the subtle bodies from this region still have a chance to be born on Earth to progress spiritually.
Once subtle bodies regress to any of the regions of Hell, then there is a remote possibility of their being born on Earth and progressing towards God.

An explanation behind the colour scheme used

For more information about Sattva, Raja and Tama please see section 6 below

3. Life after death in Heaven and other positive regions in the Universe

Footnotes (based on the numbers in red in the above table):

3.1 Life after death in positive planes of existence and reincarnation on Earth

After death, from the subtle planes below Maharlok, people need to be reincarnated on the Earth plane in order to settle their destiny and complete their give-and-take accounts. If after death one attains higher regions such as Maharlok or Janalok due to higher spiritual level, one does not need to be reincarnated as all of the individual’s remaining destiny (accumulated account) can be worked out from these planes themselves. However, these evolved subtle bodies in their life after death may choose to be born of their own will. They do so because of their expansive nature primarily to act as spiritual guides for humanity and to help society grow spiritually.

3.2 The importance of the Earth plane

The Earth is very important. It is the only region where we can make rapid spiritual growth and settle our give-and-take account in the shortest period of time. The main reason for this is that with the help of the physical body, we can do many things to enhance our spiritual growth and spiritual level and reduce the basic subtle Tama component.

Other than Earth, spiritual growth after death is mostly likely to occur only in the regions beyond Heaven such as Maharlok etc. This is because after death in Heaven, the subtle bodies run the risk of getting caught up in the unending pleasures it offers. The punishment in Life after death in the Nether and Hell regions is so severe and also the distress from the other higher-level ghosts is such that it becomes very difficult to rise above the suffering to undertake any spiritual practice of value.

4. Afterlife in the negative regions: Who goes to Hell after death and what is Hell like?

The following table is a description of examples along with the average intensity of happiness and unhappiness we experience in the various planes of existence of Hell.

5. Movement of subtle bodies between subtle planes of existence in the Universe after death

In the afterlife, one is assigned that plane of existence which matches one’s basic nature in terms of Sattva, Raja and Tama after death. This is also a function of one’s spiritual level. Hence, subtle bodies from lower positive subtle regions in the afterlife cannot go to higher positive subtle regions and those from first or second negative planes of existence cannot go to the deeper planes of Hell. This is similar to how people living in the planes find breathing difficult at higher altitudes, but people staying at higher altitudes manage fine.

6. What decides where we go after death?

At the time of death, as the physical body becomes inactive the vital energy used for the functioning of the physical body is liberated into the Universe. This vital energy at the time of death propels the subtle body away from the Earth region. Just as the weight of a projectile decides how far a rocket will propel it, similarly the weight of the subtle body decides which plane of existence it goes to in its life after death. 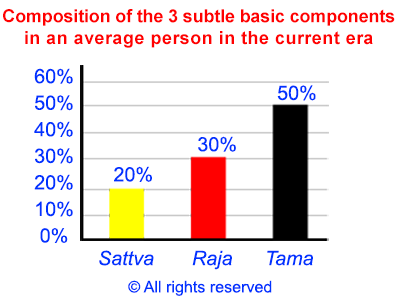 Please read the article on the 3 subtle basic components.

The more we are filled with the Raja and Tama components the more we display the following characteristics which add to our ‘weight’ and impact which subtle region we go to in our life after death:

A permanent reduction in the proportion of the subtle basic Tama component and the related characteristics mentioned above come about only with sustained spiritual practice according to the six basic laws of spiritual practice and will help us in our life after death. Psychological improvements with self-help books or trying to be nice are at best superficial and temporary.

6.1 Importance of the mental state at the time of death

The mental state at the point of death, apart from what has been mentioned above, is very important. Our mental state is generally relative to the proportion of the subtle basic components in our being.

If a person is actually doing his spiritual practice such as chanting the Name of God at the time of death then the influence of desires, attachments, ghosts, etc. are minimal possible for that person compared to his state when not chanting. This makes his subtle body lighter. Hence, if he passes away while chanting, he attains a better plane of existence in life after death among the sub-planes than what he would have attained were he to pass away without chanting.

At the time of death, if a person is chanting the Name of God and is also in a state of surrender to God’s will, then he attains an even better plane of existence in his life after death and his sojourn is undertaken with lightning speed. This is because the person being in a state of surrender on Earth region itself, has very less chance of increasing his ego in his life after death. Also, the entire responsibility of his well-being in the afterlife is undertaken by his evolved spiritual guide (Guru).

The following are the types of deeds in our life on Earth that typically land us in one of the regions of Hell in life after death.

The extent, duration and intention behind the wrong-doings are important factors deciding the level of Hell attained after death rather than just the action itself.

7. Life after death in case of suicide

8. After death and before next birth – Why is there a time lag between two reincarnations?

In the course of research by using hypnotic trance to trace the past lives of the person, it has been found that the time lag between two reincarnations on Earth could be on average 50 to 400 years. The reasons for this time lag are as follows:

In the case of subtle bodies that have been relegated to the deeper regions of Hell after death, the time lag between two reincarnations may be thousands of years. They stay in their respective region of Hell until such time they have completed their punishment. In most cases, this means languishing in plane of existence of Hell in their life after death till the dissolution of the Universe.

9. Life after death – in summary

The above facts about the various planes of existence give us a fair idea of the possible consequences in our life after death of how we live our lives. Only with spiritual practice or with extreme meritorious deeds can one go to the higher subtle regions and thereby avoid unhappiness and punishment and enjoy higher levels of happiness in life after death. There are also better chances of a reincarnation on Earth plane in circumstances conducive to spiritual practice. This is so that one moves further up in the subtle planes in the Universe. As we go further into the current Era of Strife (Kaliyug), there is lesser likelihood of people going to the higher planes of existence after death.

Once we go to the lower subtle planes such as the Nether region or other regions of Hell after death, we stay there and experience severe unhappiness for centuries until we completely pay for our demerits (sins) by suffering the intense punishments meted there and get a chance to be reincarnated on Earth.

To do consistent spiritual practice on the Earth plane of existence according to the 6 basic laws of spiritual practice is like swimming against the tide in the current era. However, it is also a guaranteed way of advancing to higher subtle regions in our life after death.