The three subtle basic components (trigunās) of Sattva, Raja and Tama are the very fabric of creation. Unknown to modern sciences, they permeate through all living and non-living, tangible and intangible things. The vibrations emitted by anything are dependent on its predominant subtle basic component. This also influences the behaviour of all things. The proportion of these components in human beings can only be changed by spiritual practice.

The purpose of this article is to give our readers a strong foundation about the concept of the three subtle basic components. It is a very important article for our readers as it forms the basis of many of the articles on this website.

According to modern sciences, the Universe is made up of basic physical particles that include electrons, protons, neutrons, mesons, gluons and quarks.

At a spiritual level, however, the Universe is made up of something even more basic. These basic particles are known as the three subtle basic components (trigunās) namely Sattva, Raja and Tama. In the word triguna, “tri” stands for three and “gunās” stand for subtle-components.

The characteristics of each of these components are described in brief in the following table:

We call the components subtle because they are intangible, not physical in nature and they cannot be seen with any instruments such as the latest electronic microscopes. Technically advanced physical instrumentation in the future too will not be able to measure them. These three subtle basic components can only be perceived by the subtle sense organs or our sixth sense (ESP).

Due to the intangible nature of the subtle basic Sattva, Raja and Tama components, schools and universities that teach modern sciences are unaware that they exist. Hence they do not include them in their curriculum. As a result, the concept of the three subtle basic components may seem alien to some of us. However this does not discount the fact that they pervade our entire existence and the world we live in. Depending on which one of the three subtle-components is predominant within us, it influences how we:

Since they are not physical in nature, it is difficult to put a finger on them and give them a physical characteristic. Through this article, we have endeavoured to give you a sense of what these three subtle-components are about and how they influence our lives.

2. Comparison between the smallest physical elements and the three subtle basic components

The following table gives some basic differences between the smallest physical elements known to modern sciences and the even more basic subtle-components that are known to Spiritual science.

The following diagram obtained through the sixth sense (ESP) shows what the three subtle basic components look like when they are active. 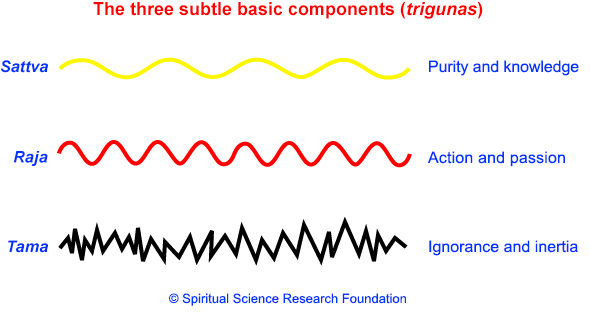 The three subtle basic components are basically intangible particles. When they are active, i.e. when there is energy accompanying them, they appear in a wave form.

Explanation of the diagram

4. The three subtle basic components and the five Cosmic Principles

The following table shows how each Cosmic Principle differs in its composition with regard to the proportion of the three subtle basic components.

The three subtle basic components and the five cosmic elements

Humans are composed predominantly of the Absolute Earth and Absolute Water Principles. As an individual starts evolving spiritually, he or she starts functioning at progressively higher levels, like the Absolute Fire Principle etc. This is characterised by a sense of radiance emanating from a spiritually evolved person. As this happens, the individual’s basic needs begin to decrease, such as the need for food and sleep.  In addition, his comprehension and capacity to perform various activities increases markedly both quantitatively and qualitatively.

5. The three subtle basic components and the world

The following chart shows the relationship between non-living things and the three subtle-components.

The proportion of subtle basic components in various non-living objects

The following chart shows the relationship between living entities and the three subtle-components. As you can see, life has a greater value in terms of the Sattva subtle basic component across the board as compared to even religious places as shown in the table above.

The proportion of subtle basic components in various living objects

This is also one of the main reasons why the spiritual level of a person in particular premises has more impact on the overall vibrations emanating from that place as opposed to the premises itself. For example, if a person of the level of a Saint enters premises that have negative vibrations due to defects in construction, it will have negligible effect on the Saint. Thus the sciences of Feng-shui and the science of studying premises (vāstushāstra) are of more relevance to persons at lower spiritual levels or those who do not perform any spiritual practice.

In the following sub-sections, we expand on how the three subtle basic components impact different aspects of our lives.

6.1 In relation to what we are comprised of 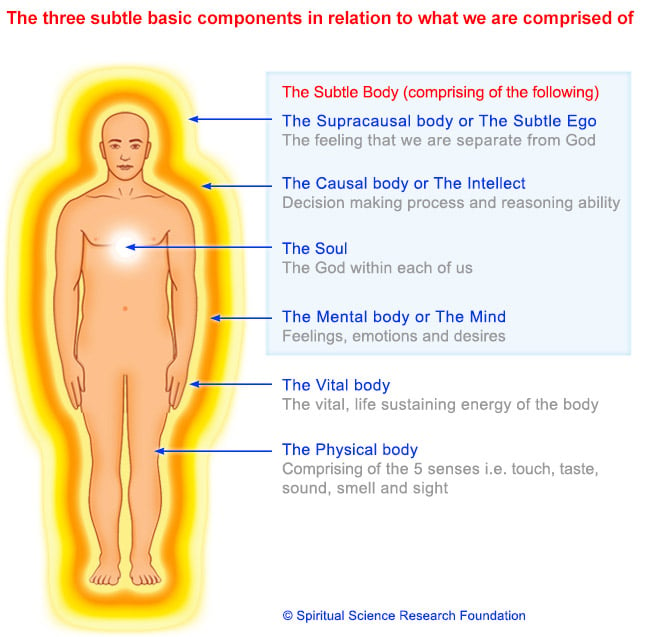 As the subtle basic Raja component is related to the functioning of the body, its proportion is the same in all the bodies. However as you can see from the table above, there is considerable difference between the Sattva and Tama components across the various bodies. This has a direct impact on the ability of the body to provide us sustainable and long lasting happiness. For example, the Sattva component in the intellect body is high compared to the physical body. Therefore the quality of the happiness we experience when we are intellectually stimulated and satisfied is of a higher quality and more lasting than happiness experienced due to the physical body.

6.2 In relation to spiritual level

As we generate more of the Sattva component within us (in proportion to the other two subtle-components), it positively affects our spiritual level and also our personalities.

The following is a graph that shows the different proportions of the three subtle basic components within us as we increase our spiritual level through spiritual practice. 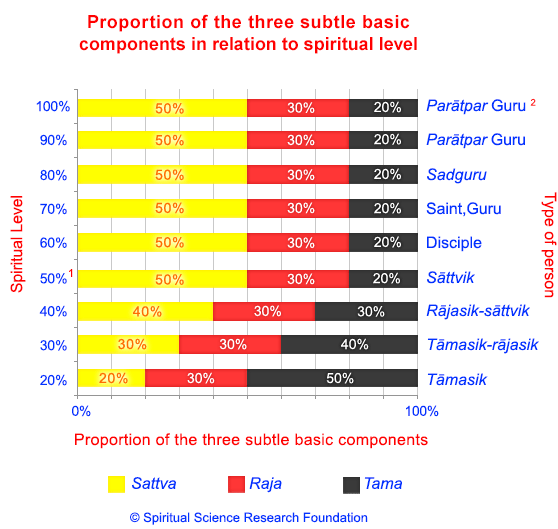 6.3 Reduction of the influence of the three subtle-components with increasing spiritual level

The Soul, which is the God within us, is beyond the three subtle basic components and is therefore not comprised of them. Therefore the more the light of the Soul is illuminated within us through spiritual practice, the less the influence of the three subtle-components in dictating our personalities, choices and actions. In the final stages of our spiritual growth when the light of the Soul illuminates us almost completely, we live our lives in complete unison with God’s will and the three subtle-components are diluted and exert a negligible influence on our personalities. 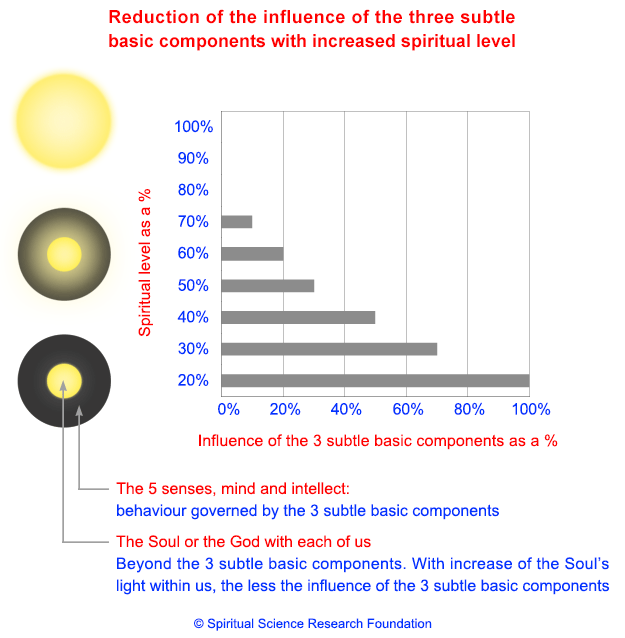 6.4 With relation to our personality

In the below table, we have provided a few pointers that will help to distinguish the type of personality that a person displays according to the predominant subtle-component.
These are just pointers to give one a basic understanding. A correct analysis of the predominant subtle basic component in a person can only be ascertained through one’s sixth sense (ESP).

These attributes are not mutually exclusive. For example, a certain sattvik person may need 9 hours of sleep or a tamasik person may have a virtue like tolerance. But the person’s nature is decided by the overall sum total of the virtues and defects. Hence one should not decide about oneself or others based on one or two characteristics but the overall picture needs to be taken into consideration.

Also it is very rare that a person is found to be entirely sattvik, rajasik or tamasik. Mostly a person is either Sattva-Raja or Raja-Sattva or Raja-Tama predominant. A Sattva-Raja person would have characteristics of both Sattva and Raja in almost similar proportion with a predominance of Sattva. In the case of a Raja-Sattva person it would be just opposite.

Depending on the subtle-component that is most predominant within a person, they will accordingly display that type of personality. However as much as one may dress up or camouflage oneself behind expensive clothes and accessories and sophisticated small talk, the basic frequencies that one emits will be based on the subtle-component that is most predominant within one. People with advanced sixth sense can look beyond the external veneer that people project to the world and pick up these subtle and intangible frequencies. As a result, they can easily tell a person’s basic nature i.e. sattvik, rajasik or tamasik and the characteristics that they are most likely to display.

A true litmus test of an individual’s predominant subtle-component is when one is left to oneself. A person generally shows his or her true colours in a situation where the person is not being monitored and is reflected by the individual’s behaviour. The following example will help crystallise this point.

Let us take an example of a class of students in the 4th grade. They are a noisy, rowdy bunch with a teacher who tries hard to discipline them. If the teacher’s voice is very firm she has a fair chance of keeping the class quiet. As a result, the class is quiet only in her presence. However the moment she leaves the class they are back to their mischievous ways. This is because these children are basically rajasik and tamasik in nature.

If on the other hand there is a sattvik child in the class and his fellow students try to enlist his participation in some incorrect act like bullying, playing a nasty prank or indulging in cheating, the child would absolutely not be able to comply as his basic nature is sattvik. He is more likely to get a knot in his stomach than enjoy whatever his classmates are suggesting. He would not be able to live with himself if he did any incorrect act.

Thus rather than superficially trying to change children through moral value lectures, a permanent change could be found if they were encouraged to do spiritual practice and were brought up in a spiritually conducive environment that would increase their Sattva component.

7. The three subtle basic components and our lifestyle

We have provided a few generic examples of the various facets of the world we live in and the dominant subtle-component. Depending on whether we are sattvik, rajasik or tamasik individuals, we will gravitate towards sattvik, rajasik or tamasik lifestyles. Also associating ourselves with particular components through our lifestyle choices increases the respective subtle-components within us.

The three subtle basic components and our lifestyle

As ghosts are Raja-Tama predominant, they frequent Raja-Tama environments on Earth as they are most likely to find Raja-Tama predominant people there. These like-minded people are ideal targets for possession and carrying out the plans of ghosts on Earth. In other words, a person who is predominantly tamasik and who has a liking for harming others stands a high risk of being controlled by ghosts to harm society.

The principle behind protecting oneself against a ghost is to increase one’s sāttviktā. As ghosts are tamasik, they cannot tolerate highly sattvik environments or people. It is for this reason they simply cannot possess a higher level Saint or a Guru.

Refer to the article on ‘Why does a possessed person manifest when in contact with a higher sattvik influence?’

The key points to take away from this article are: