1. Introduction to effects of television

Television and movies are a way most people opt to both escape from their everyday problems, seek pleasure, as well as connect to the world in search for information and experiences.

Given the universal appeal of television and movies we decided to study their effects at a spiritual level, both on the viewer, and their immediate environment. Among the questions we sought to answer were:

While on average we rely heavily on television for news, information and relaxation, research studies have also documented the negative impacts of television. Below we list some of the more common criticisms that television faces in today’s society (Ref: CyberCollege).

Many people nowadays experience that they cannot move away from the television, or spend irrational amounts of time thinking about, discussing or watching re-runs of television programmes. So what exactly captivates people and lures them towards television, despite all its ill-effects? To answer this question, SSRF undertook spiritual research that reveals what happens in the spiritual dimension while watching TV.

Ms. Priyanka Lotlikar, a seeker with advanced sixth sense studied what happens in the spiritual dimension when one watches an entertainment programme on television. She presented this in the form of a drawing based on subtle-knowledge.

The findings have been verified by His Holiness Dr. Athavale for accuracy. 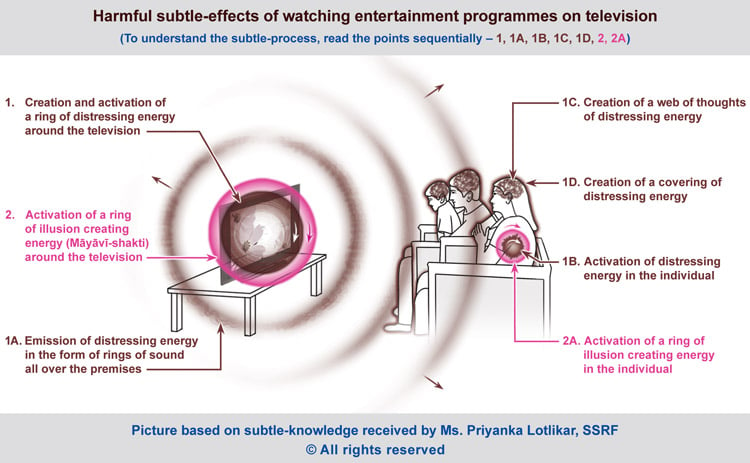 Below is a summary of the findings:

The spiritual research findings therefore explain why viewers are mesmerised by television. They also offer a foundation for explaining the ill-effects of television observed by modern science.

Our seekers with advanced sixth sense analysed the impact of a variety of TV genres on us at a spiritual level.

We further found that when programming included violence, gore, killing, nudity or anything sexual in nature, it would increase the Tama component in the programme and in the viewer. Slang, profanity and Tama-predominant forms of language also have a negative impact on viewers.

Tip: You too can perform a subtle-experiment and study what you experience while watching different genres of television programmes. We encourage you can to note down your experiences and send them to us via the Post a Comment facility.

Ms. Priyanka Lotalikar then studied what happens at a spiritual level when one watches a Sattva-predominant programme. In this case, the programme was a video of a discourse delivered by a Saint, His Holiness Bhaktaraj Maharaj, a Saint of the highest order. 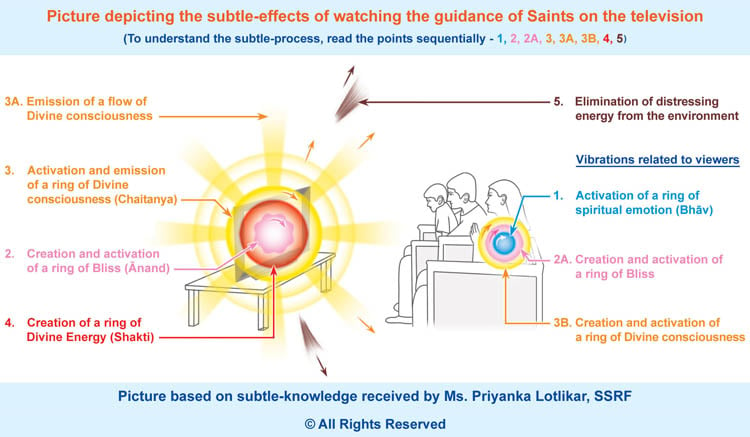 Below is a summary of the findings:

From this analysis we can see that watching Sattva-predominant programmes such as a spiritual discourse by a Saint has a spiritually beneficial effect on us. Unfortunately the frequency of such programmes on television is negligible.

The above principles hold true for movie watching as well, with a few notable additions:

We enjoy going to the movies or watching TV as a means to relax and escape our day-to-day activities. However, only spiritual practice can provide us true relief and give us the relaxation and Bliss that we seek through other means. Watching the discourse of a Saint, attending satsangs, chanting, prayer, service unto the Absolute Truth (satsēvā) and other aspects of spiritual practice will help uplift us spiritually.

Sometimes watching TV and movies is a way of socialising and spending time with friends and family, leaving us little choice. So what can we do if we don’t have a choice in what we watch, when we watch it or whether we watch it? Even the simple efforts of chanting and prayer before, during and after these activities will help go a long way to protect us. For example, praying: “Oh Lord, please protect me from any negative ill-effects from watching the movie/television show, and help me to chant throughout. Please form a protective sheath around me with the power of Your Name”.

We can try to gradually reduce the number of hours we spend in watching TV and movies. We can also avoid Tama-predominant programmes.

As we increase our spiritual practice, the Sattva component in us will increase. In so doing, the entertainment choices we make will naturally also become more sāttvik, as our ability to discern and appreciate spiritually beneficial activities will improve and in turn keep us spiritually strong.