It started as a movement for ‘going back to nature’, ‘expressing freedom’, ‘being healthier’ and was even called a philosophy.

“This naturist philosophy has several sources, many of which can be traced back to early 20th century health and fitness philosophies in Germany and England, although the concepts of returning to nature and creating equality have much deeper roots. From Germany the idea spread to the rest of Europe and North America and beyond where a network of clubs developed. The model of German naturism is to promote naturist family and recreational sports, with the German Association for Free Body Culture even being a member of the German Olympic Sport Federation. French naturism developed on the basis of large holiday complexes. This in turn influenced Quebec and the United States. A subsequent development was tourist naturism, where nudist resorts would be built to cater for the nudist tourist, without any local base. This concept is most noticeable in the Caribbean. Nevertheless, most naturist activity takes place at local naturist clubs, especially in Western countries.

Alternatively, people interested in social nudity can attend clothes-free beaches and other types of ad-hoc nudist events. At these venues, participants generally need not belong to a naturist club.” – Source: Wikipedia 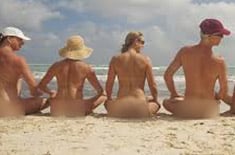 At first, one might think that public nudity is not a big deal and an individual has the right to do what he or she pleases. Yes and no. What makes us human is that we have a certain understanding of what is correct and incorrect.  Also because we live among other humans, we should take others into consideration when making decisions.

On a principle level animals and human beings have some things in common: eating, sleeping, fear and sex. Animals have intercourse in public. What differentiates us from animals is that human beings do not have intercourse in public as it is not human-like behaviour. If this does happen, then people who indulge in it are brought down to the level of animal behavior. Over a period of time if such behavior continues to increase, society as a whole starts declining. Similarly, we should not bathe, sunbathe, play sports or dine in the nude.

If a child always does what he or she likes, the child will not grow into a properly cultured human being. Likewise if we all do as we want in the name of freedom, it is not good for us and we also harm society. As human beings we have individual and collective responsibility to behave properly in the presence of other human beings in our society.

This understanding is based on God’s Law of Righteousness that is inherent in all of God’s creation. If one lives on an island alone, and has no clothes, then of course, bathing in the nude would be a natural thing to do. But this is not true in the case of nudist beaches.

Impact on the mind and ego

The mind of most individuals today is not that pure, which is also why the spiritual level of humanity is at an all-time low. Knowingly or unknowingly, bathing in the nude among others who are also nude would entice some personality defects and ego like showing off, pride, competition etc. Sexual desire decreases among nudists over time as they are among nude people all the time, so one of the major sources of short-time Bliss (Ānand) that is acquired through sexual pleasure is lost. Sexual ability becomes less as there is no novelty any more.

Mostly nudists think that their body awareness decreases due to bathing in the nude, but actually the opposite happens. In Spirituality we have to reduce body consciousness, which is a form of ego.  Then we make spiritual progress instead of regressing spiritually. The body is controlled by the mind, mind by intellect and intellect by ego. Body consciousness is related to the mind. Consequently, one’s ego increases as well. From a spiritual perspective, this is not desirable.

Among nudists the center point in life is nudity and all revolves around it. Then frustration occurs with age because we do not look as good anymore and depression follows. There are also elements of exhibitionism and narcissism.  Further, addiction to nudism can develop.

“People who are selfish, have only their own needs or wants in mind and ‘self’ is their center of attention. Contrary to this, seekers of God have God as their center of attention and consequently acquire protection from God. That is why we need to do regular spiritual practice as per the 6 basic principles, to progress spiritually and naturally move away from selfishness and other practices which are spiritually harmful for us and society.” – His Holiness Dr. Athavale

When entire families live in nudist beach colonies, this can negatively impact the delicate psyche of children so that they are inclined to behave the same way when they grow up. And last but not least, negative energies are also naturally attracted to a nude human body. So those who enjoy the freedom of a nudist beach may with time become more affected by negative energies, whether they know it or not. This applies even to small children bathing in the nude.

There is another trend in large cities like New York of restaurants where people will dine in the nude. 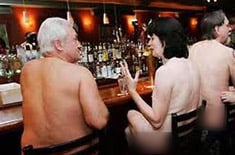 The very idea of bathing or dining in the nude among other nude people has been stored in the affected person’s mind by negative energies. The thoughts that negative energies give are very subtle and almost always presented to us in a pleasant and acceptable story or explanation, which may make sense to the intellect of many individuals. That is how negative energies lure us into being increasingly attached to our body, desires and the illusionary impermanent world we live in, and to forget God and making spiritual progress. Negative energies hence achieve their goal and we lose in the long run.

“The one who is looking at the scene is affected by the scene.” – H.H. Dr. Athavale

Whatever action we take, once the act is over, the thought of it remains in the subconscious mind and one is prompted to repeat the same act.

Being in the nude among other people incurs 3% sin each time one does that.

Comparative table of sins to understand the above point:

When considering the various options available to us throughout our lives, we need to introspect and question even what appears to be the most pleasant and attractive choice or experience available.  Before making a decision, we should ask ourselves whether a particular option is consistent with the path of Righteousness.  In other words, will this decision bring me closer to God or take me further away from God. The more often we engage in Unrighteous behavior, the unhappier we will be.  And the closer we come to Righteousness, the more often we will be in Bliss – superlative permanent happiness.

“What people want is happiness, but Bliss is a far more superlative happiness. It depends what we want: permanent happiness and Bliss or happiness and consequent sorrow? God means Bliss and no sorrow at all.” – H.H. Dr. Athavale

Only by doing regular spiritual practice is one able to naturally determine with certainty what is right or wrong regardless of how desirable the activity or object might be, and consequently live a more Blissful life in our society.