I began studying yoga, meditation, alternative medicine, astrology, etc. around 2009 in order to get my wreck of a life together. At the time I had serious problems with bad relationships, prescription and street drugs, and alcohol. I smoked two and a half packs of cigarettes a day. I never had any money. I remember walking down the street one evening with what seemed like the Titanic on my shoulders and thinking “If this is how I’m going to feel for the rest of my life, I’m not sure it’s worth it.”

At that point I had tried religion, atheism/rationalism, drugs, girls, music, science, medicine, martial arts – everything – to try to get myself into a place of relative sanity and free from the grips of depression and addiction. The hardest part was having no idea how I’d ended up in the predicament I was in, with no idea when it started or where it would possibly end. I resigned myself to the idea that life was dismal.

Right after this I started meditating, doing yoga, breath work, energy work like reiki, etc. I thought that by calming my devastatingly anxious mind I’d be able to start getting away from the situations and people that made me feel quite enslaved. It actually worked a little bit, and a mixture of meditation and dire poverty helped pull me out of the possibly fatal fire I built for myself. But it only worked partially and only externally. Levels of happiness didn’t go up, but the amount of poisons going into my body did temporarily drop. Then, slowly I felt myself growing more and more detached from family, friends, colleagues, etc. for no particular reason. Despite getting counseling I had continuous trouble. Meanwhile, I hid this from friends and family. I felt like they couldn’t really help me and I didn’t want to worry anyone. 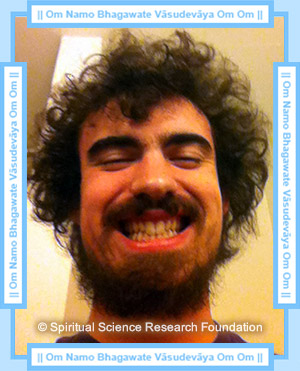 Then in 2012 I started drinking continuously. This was no secret to the people around me. A lot of people who loved me saw me in some pretty bad conditions after I drank fifteen or twenty alcoholic drinks in a night. Sometimes I would wake up at noon, drink until I passed out around six in the evening, wake up a couple of hours later, and drink until I passed out again late at night. I woke up several times with bruises on my head that I got from falling in the street. Once I woke up with blood all over me and I was uncertain if I was hit by a car the night before. I frequently found ridiculous things I had texted the night before on my mobile phone. Relationships suffered. I almost got into quite a few fights over minute disagreements. I often woke up to find my apartment completely trashed from being drunk the night before. Extreme embarrassment over my own behavior became common. I was literally acting like a man possessed, and the possibility of me dying in a stupor was very high.

I couldn’t go a single day without getting drunk. I had no idea how I got into this spiral of drinking, waking up horrendously hung over, deciding never to drink again, drinking, and repeating. I had no idea why I wasn’t able to eat anything or get away from the bar or just feel content.

Then a miracle happened, and I’m not exaggerating. My family didn’t know any of this was going on because I was excellent at hiding my problems and parental denial goes a long way. However, my mother sent me a message one Sunday that she was really concerned that I might be drinking too much.

I told her I was fine and went to the computer. Somehow I ended up on the Spiritual Science Research Foundation’s (SSRF) website. Magically it had an article specifically on addiction, including its spiritual causes and treatment. As I read it, I felt hope for the first time in many years. This was in the middle of summer in 2013. I immediately put into practice as much as I could of the advice provided by SSRF.

The foundational practice they suggested was chanting, because unlike meditation it could be done continuously. Chanting lowers stress, increases concentration and happiness, and fends off addiction quite well. That was to be supplemented with various affordable spiritual remedies.

I saw benefits immediately. SSRF presented its research in a way that I had never seen Spirituality discussed before. No longer was it an ambiguous and abstract system of new-age advice like “think happy thoughts” and “take deep breaths.” It was an actual science, with definite causes and effects, with definite systems of measurement. I knew in my heart that if I stuck with SSRF I could finally be free.

Nine months after starting spiritual practice with SSRF, here are the some of the pros and cons of implementing everything I was told as well as I could:

It was a process, but improvement was continuous and noticeable enough to be encouraging. On top of that, the people in SSRF were always there for me if I needed help and never judged me for my problems. Sometimes I would be in trouble and feel too ashamed to ask other seekers for help. I remember building up the nerve to tell a fellow seeker that I had been drinking a lot the week before, and his response touched me: “JT, you need to reach out to other seekers when you are in trouble!”

“When I sat down for concentrated chanting, my head felt very hot and I had the thought to look at my hands in case some Divine particles were forming there.

At first I saw nothing but before my very eyes Divine particles formed on both hands! Moreover, when I prayed that I could take a video to show them to other seekers they grew brighter so I could tape them! “

SSRF became my family and lifeline. Without them I would possibly be dead or definitely at least miserable. If you are curious about Spirituality and chanting but don’t know how to start, SSRF would love to help you. If you already practice Spirituality through yoga, meditation, etc. but feel like you’re not getting the appropriate gains for your efforts, SSRF would love to help you. If you are living a life of quiet desperation and have run out of places to turn, SSRF will help you.

The best part is they don’t want anything from you. It won’t cost you money, a credit card number, anything. Realistically you don’t even have to use your real name. Their only purpose is to improve the life of all their visitors, and they are excellent at it.

Much love to everyone, and thank you so much for reading.