In the 1970s Nancy Ann Tappe developed a concept of Indigo children, which referred to children who were believed to possess special, unusual, and sometimes supernatural traits or abilities. The concept of Indigo children later gained popular interest with the publication of a series of books in the late 1990s and the release of several films in the following decade. Since then a number of phrases have been coined to refer to such gifted children such as Crystal children, Rainbow children, Star children, Psychic children, etc.

SSRF and the University of Spirituality too, over the years has observed such extraordinary children (albeit from a purely spiritual viewpoint) who are being born in current times and who are of a higher spiritual calibre. They are more spiritually evolved (i.e., they have a higher spiritual level) from birth itself. We have coined a term and called them ‘Divine children’. These children are not merely gifted with sixth sense, telepathic ability or clairvoyance. However, through advanced sixth sense, our spiritual research team found that they are born at a high spiritual level and come from the higher positive subtle regions of the Universe. We would like to take this opportunity to share spiritual research conducted on this spiritual phenomenon with the world, the importance of such children and the purpose of their birth in the current turbulent times.

In this section, we will also provide case studies about such Divine children over various age-groups and how their behaviour differs to the average child.

It is every parent’s dream to have a gifted child; a child who shows a natural and extraordinary talent in worldly disciplines such as learning languages, solving math problems with ease, superior scientific reasoning, learning complex music composition and other various arts. Parents are on the other hand less likely to be pleased with a child who has a gift of a higher level of sixth sense and who makes statements such as, “I see dead people or ghosts”. Most parents do not know how to handle kids making such statements and are less equipped to deal with kids who show an innate understanding of the spiritual dimension. It is also common knowledge that if a child shows extreme devotion for the Divine and wants to devote his or her entire life towards spiritual growth and serving God, their wishes would most likely be met with a lot of resistance from their parents.

What most people do not know is that gifted children, who have for example the ability to compose complex musical pieces at a young age, are most likely to be influenced by some entity in the spiritual dimension. The nature of the entity could be positive or negative. In fact, parents should bear in mind that the spiritual dimension is more likely to have a higher impact on their child’s life than just the physical dimension and psychological thinking. 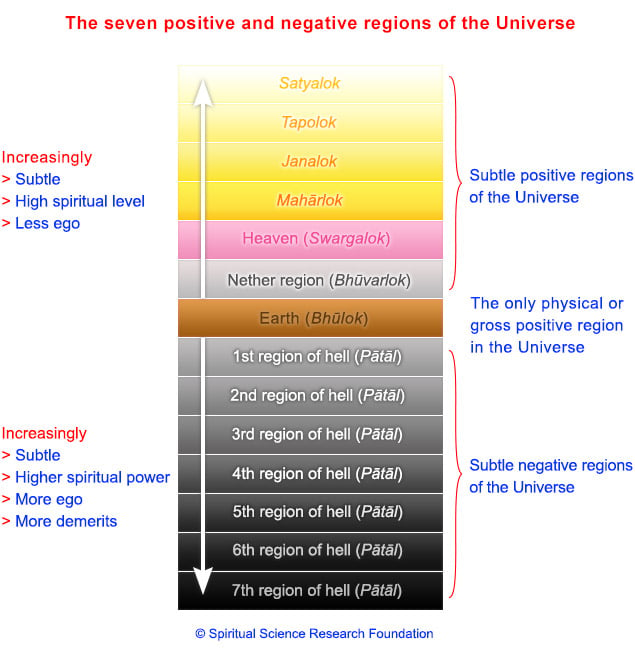 In our article on Life after Death and Life Before Birth: The Time Before Conception, we mention the likelihood of which subtle region of the universe (shown above) do people go to after death. Contrary to popular belief, in current times less than 2% of people actually make it to the subtle region of Heaven (Swarga) after death and an even significantly less proportion of people go to the even higher positive regions of the Universe after they die. Most people after they die go to a region known as the Netherworld or Bhuvarlok. If their deeds on Earth are of an evil nature, they can go to one of the seven regions of Hell after death as a punishment.

Subtle bodies from the higher positive regions of the Universe (Maharlok and above) do not generally take rebirth on Earth. This is because in these higher planes of existence, one can settle their give and take account as per their destiny in that plane of existence itself. They do not have to be born on Earth to settle their destiny. Even subtle bodies from the subtle region of Heaven are reborn on Earth infrequently. The vast majority of people born on the Earth plane of existence come from the subtle region of the Netherworld (Bhuvarlok).

However, every now and again spiritually evolved subtle bodies from the higher regions of the Universe choose to be born on Earth as per some need on Earth. These spiritually evolved subtle bodies when born on Earth are known as ‘Divine children’. In the last few decades we have seen an increase in activity of the birth of such Divine children with higher spiritual levels i.e. above 50%. This means that they, at the time of their birth itself are above the 50% spiritual level due to spiritual practice undertaken in previous lifetimes.

We will explore why is this happening and what is contributing to this phenomenon in the upcoming sections.

3. Why are Divine children (spiritually evolved children) being born?

As we mentioned earlier, evolved subtle bodies from the higher subtle regions of the Universe can choose the time and place that they are born in order to fulfil some specific mission or spiritual need on the Earth plane. From the years 1999-2023, planet Earth is going through a transition phase in its history. Due to a major subtle battle taking place in the subtle planes of the universe during this period Earth too will be affected. There is also a heightened level of spiritual impurity in the environment all over the world. As part of a cleansing process and an internal rectification process during this period, we will undergo major upheavals including natural disasters and World War 3. After this from the year 2023, we will enter a positive phase in the world’s history known as the Divine Kingdom, which will be an era of spiritual renewal. With approximately half the world’s population being wiped out, the world will understand that our current way of life and current type of leadership actually failed us and got us into this trouble. The Divine children being born in greater numbers today, as they come of age, will help to smoothen this transition and lead the world in the times to come to greater spiritual awareness in all aspects of life and governance. These children in the future will help society to grow spiritually and create a world of stability.

4. How many Divine children are being born?

Thousands of Divine children will be needed to run the Divine kingdom. As of September 2020, SSRF through advanced sixth sense has identified over 1,000 such children from all over the world. Up to now, they come from three positive subtle regions of the Universe. The following table shows from which subtle region (plane of existence) of the Universe these children have descended from.

General comments and observations about the table:

5. Where and to whom are Divine children being born?

Since such Divine children are spiritually evolved they have relatively less give-and-take accounts with others. This means that their destiny and their accumulated account is less. They take birth in families to nullify the remaining 20 to 30% of their give-and-take account, which is remaining with their future family members. We have found that typically such Divine children are more likely to be born to parents who are seekers themselves and who are regularly practicing Spirituality. This is God’s way of ensuring that Divine children have a spiritual upbringing and that they are allowed to pursue their spiritual goals. Accordingly, they are not confined to following the rat race of modern science education that most kids have to adhere to nowadays.

70% of such sāttvik (spiritually pure) children are and will be taking birth in India. The remaining 30% are being born outside of India. This is because of the spiritual purity of India, and that it is India which will lead the world spiritually during the establishment of the Divine Kingdom. Also, we found that as the University of Spirituality and SSRF are tirelessly engaged in helping society make spiritual progress, due to God’s grace we are very fortunate that many such spiritually pure children are taking birth in seekers’ families associated with the organisations.

6. What are the characteristics of Divine children? As seekers desirous of God-realisation have no interest in worldly things, similarly the Divine children who have taken birth from higher positive planes of existence do not have interest in things related to activities of mundane worldly life. They don’t like the environment at school and college, but parents push them to excel in studies. However, when parents realise that they have a strong spiritual bent and their purpose of life is to attain God-realisation, they will be able to assist their children better. Such children can not only progress themselves, but also help others to progress towards God.
– His Holiness Dr Athavale, 18.12.2010

They usually have a happy and blissful disposition. They have a peaceful nature and they cry less as compared to other children. They have a liking for simple living and prefer sattvik clothes and food. It is important to note that making a decision on physical appearances alone can be deceptive as negative energies can create such positive behaviour too, so as to fool people.

When seen through an advanced sixth sense of vision, they exhibit spiritually positive auras. Indigo kids were named after the blue aura which was perceived around them by Nancy Ann Tappe. However, when seen through the subtle dimension, Divine children have different coloured auras. Through spiritual research we have found that this depends on the path of spiritual practice they followed in their previous births. In the case of the Divine children being born in the current era, they are mainly from the path of Bhaktiyoga (Path of Devotion) and hence have a faint blue aura.

6.3 Spiritual properties depending on the subtle region which Divine children come from

The spiritual properties of Divine children vary as per the subtle region from which they are born.

Let’s first look at the reason or mission of a subtle body to take birth on Earth based on the subtle region of the Universe they come from.

A visual part of our spiritual research is knowledge gained by seekers through an advanced sixth sense of vision. These seekers are able to see the spiritual dimension and they present their findings in the form of drawings and text. Given below are drawings by Mrs Yoya Vallee, which predict how these Divine subtle bodies take birth together for participating in God’s mission. Divine children have been coming in batches for many eras to help spiritually uplift humanity and guide them towards a spiritual path and finally spiritual enlightenment. 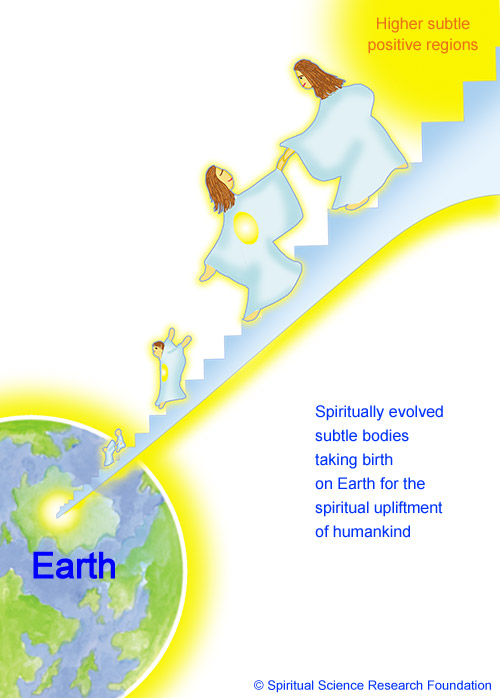 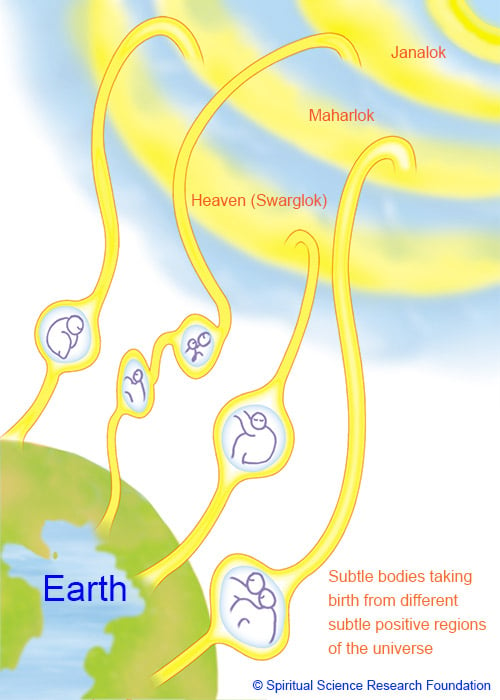 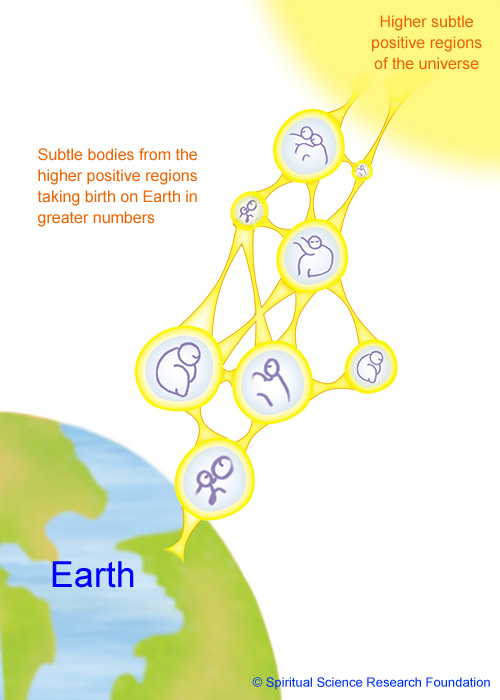 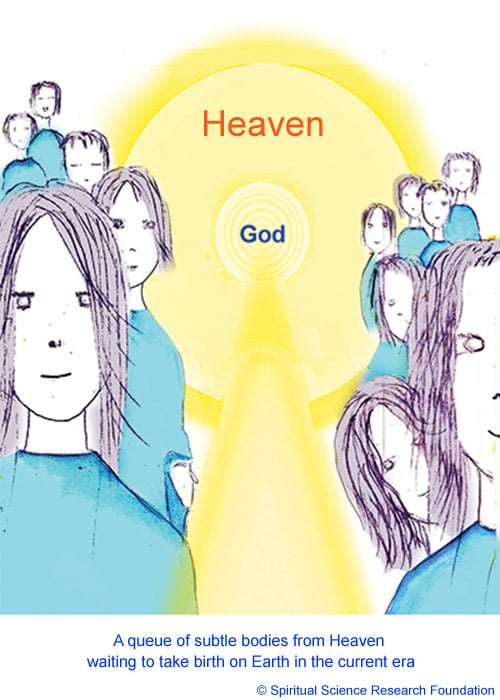 8. Impact of the presence of Divine children on the environment

Due to their Holy company or satsang, humankind will get a lot of spiritual benefit. Such children only speak at a spiritual level. Accordingly, when average people hear them, their worldly thoughts and emotions reduce and/or are nullified and they are also able to remain at a spiritual level. Due to the satsang of Divine children, our intellect gets convinced that we have to do spiritual practice and get liberated from the cycle of birth and death. Our faith in God is reinforced through their influence and example. They have leadership qualities and therefore they automatically take responsibility for other’s well-being and encourage them towards spiritual practice.

Regions of the Universe