Abstract – The battle of good vs evil

The subtle-battle of good vs evil has been waged periodically since earliest times. It is once again being fought in the subtle-world during the years 1999-2023. A battle on Earth will then ensue from 2015 to 2018. Thereafter, the world will undergo a period of flux to recover from the battle on Earth and will then prepare for a new era. This new era will be known as the Divine Kingdom and with it humanity will experience a thousand years of peace and Righteousness (Dharma). The times we live in are very significant as the ramifications of this battle will be felt by the entire universe. However the current times are also highly conducive for spiritual practice to attain God-realisation (the highest spiritual state).

Note: To understand this article, it is necessary to read the article on the three subtle basic components of Sattva, Raja and Tama, the fabric that all of creation is made up of. From now on throughout this article, we will refer to these components and their adjectives as sāttvik, rājasik and tāmasik. For example, when we refer to a man as a sattvik person, it means that he has a higher proportion of the Sattva component in him and is spiritually purer.

1. The definition of good vs evil

From a Spiritual science standpoint people who are defined as ‘good’ are those who are living or who have passed on (also known as subtle-bodies) who:

These are typically people who are above the 30% spiritual level, are Raja-Sattva or Sattva predominant and righteous. People without the above-mentioned characteristics but are doing some good deeds like donating to orphanages, etc., though their acts are meritorious, do not necessarily qualify for what Spiritual science would define as ‘good’ people, especially if the act is done with pride. Good people and good subtle-bodies collectively come under the forces of good.

On the other hand, evil persons (living or subtle-bodies) are Raja-Tama or Tama predominant, unrighteous and have a high ego. They may even be doing spiritual practice but it is done with the goal of acquiring spiritual power for the fulfilment of some personal ambition. The word ‘ego’ is used in a spiritual context here. In addition to its everyday meaning which is ‘an overbearing self-esteem’ and ‘a high level of self-conceit’, it also includes the spiritual connotation of considering oneself to be separate from God. Evil people and evil subtle-bodies (negative energies) collectively come under ‘evil forces’.

From a strictly Spiritual science perspective those who are doing spiritual practice with the objective of God-realisation and who are progressively offering their body, mind, wealth and ego to God would qualify in the ‘good’ category. Thus, according to this definition of ‘good’, in present times there are very few good people on Earth. The majority of people come under the category of ‘evil’. Among these however, those who try to harm society and therefore actively reduce the Sattva component or spiritual purity in the world, amount to 30% of the population. The vast majority because of their lack of spiritual practice and focus on materialism can easily be used by negative energies to do as the forces of evil require.

2. Where did good and evil come from?

2.1 When did evil come into existence?

According to the spiritual law of creation everything originates from the God principle, is sustained and then undergoes dissolution back into the God principle. Thus, the universe has come into existence, it will be sustained for a predefined period of time and then it will undergo dissolution. As a part of this Divine plan, the evil that was in a seed form at the origin of the universe steadily grows. It manifests in the form of evil subtle-forces (also known as negative energies) and through people. With the passage of time, the evil element will continue to grow until it reaches 100%, at which point the universe will undergo dissolution.

2.2 Where do good and evil forces get their energy from?

Since both good and evil come from the Supreme God principle, they also get their spiritual energy from God. This may seem like a paradox; however, it can best be understood by the following analogy. Two employees of a company work equally hard and earn the same wage. After the money is in their hands, it depends on them how they will use it. One person may use it to feed himself and after that whatever is remaining to help society. The other person may use it to harm society. Earning money is akin to obtaining spiritual energy that we get when we do spiritual practice. The intention behind doing spiritual practice is very different for good and evil people. For the former, it is to merge with God whereas for the latter it is primarily to get spiritual power for their gratification. Once we build up our reservoir of spiritual energy, God gives us the free will to use it as we please. This spiritual energy when used by people for Righteousness is known as good energy and when used for unrighteousness it is known as evil or black energy.

3. What is the mission of good and evil?

The mission of the good forces is to establish an order across all the regions of the universe based on the Sattva component. In short it is to make the Universe spiritually pure. On the other hand, evil forces strive to establish a demonic kingdom based on the Raja and Tama components. This demonic kingdom is the kind of kingdom that is most conducive for demonic forces to fulfil their desires. These desires can be varied, for example they include indulging excessively in sensual pleasures, the inappropriate use of power, troubling seekers of God and obstructing them from practising Spirituality for God-realisation.

4. The balance between good vs evil

The entire universe is made up of fourteen regions or planes (lokas) of existence, comprising seven positive and seven negative planes. Earth is the only physical plane while all the other planes are subtle in nature. Heaven is just one of the positive planes we can go after death.

Since the missions of good and evil forces are diametrically opposed to each other, there is always a conflict between the two. This balance of good vs evil fluctuates over time and is never constant. Its effects are felt across all the regions of the universe. For example, when there is an increase in the power of demonic forces and negative energies the situation across all the positive planes of existence, which includes Earth (Bhūlok) and Heaven (Swarga), begins to worsen. In the Earth region, it affects us adversely at a physical, mental and spiritual level. However, the negative regions i.e., all the various levels of Hell (Pātāl), experience a positive effect from their paradigm. On the other hand, when there is a tilt in the balance towards good, there is an increase in the subtle basic Sattva component and Bliss (Ānand) is experienced throughout the universe. Peace and prosperity reigns on Earth. The demonic forces are however distressed by this positive trend. Their degree of discomfort is akin to that of a criminal who is forced to be nice to everyone.

4.1 What are the reasons behind the tilting of the balance in the direction of the evil forces? 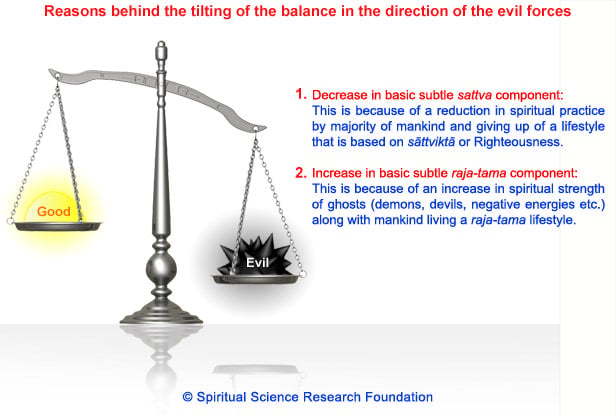 At any given opportunity, evil forces in the universe are trying to adversely influence the balance of power. Despite the demonic forces constant attempts to reduce the subtle Sattva component and stop seekers of God from practising and spreading spirituality, the good forces reign supreme as long as there are Saints and seekers doing spiritual practice. This is because God helps Saints and seekers to overcome the evil forces due to their devotion.

The demonic forces generally attack the forces of good that are within the range of +/- 10% spiritual strength of their own strength. The reason for this is that a ghost cannot affect a person where there is a difference of 10% in spiritual level in favour of the person. This is because a person is able to harness 10-20% of God’s protection, more than the level of distress by ghosts, which protects him from an attack by a ghost having a lower spiritual energy.

Those ghosts at a spiritual level of more than 10% of a person’s spiritual level do not bother to attack him, as he is too small to contend with and thus inconsequential to the ghost. So, for example, a person at 30% spiritual level will be attacked by a ghost (demon, devil, negative energy etc.) in the range of 20-40% level.

It becomes easier for demonic forces of evil to exert their power over mankind especially when people are more materialistic and less inclined to practise Spirituality. When there is an increase in the Tama component in humankind, demonic forces themselves being Tama predominant easily take advantage of the situation and try to establish their control over humanity.

Refer to the article – To what extent does spiritual level provide protection against ghosts?

5. When was the first battle between good and evil fought?

The lifespan of the universe is divided into 4 eras i.e. Satyayug, Trētāyug, Dwāparyug and Kaliyug. Satyayug was spiritually the purest era. However, after this era the average spiritual level of man began to reduce with each subsequent era until it has reached its lowest level in Kaliyug or the Era of Strife, which is the current era. This era will last for 432,000 years. We are currently over 5100 years into this era.

In each era, there are smaller cycles of Satyayug, Tretayug, Dwaparyug and Kaliyug and the spiritual awareness and potential of the people in each of these mini eras vary. Each small era cycle is further sub-divided into even smaller four eras. This sub-division of mini-cycles within mini-cycles re-occurs until it is six levels deep. The smallest mini-cycle lasts for a period of about 1000 years. The figure of 1000 is as per the time calculation in present times. For example, a corresponding mini-cycle in Satyayug era would be much longer. This is because Satyayug was an era which had a very high subtle Sattva component. One of the characteristics of Sattva is expansiveness, whereas that of Tama is decay. Hence one year of Kaliyug would essentially mean many more years in Satyayug.

At the beginning of creation, the balance was 100% in favour of the forces of good as demonic forces were only in a latent or seed form. This is because in the first era, i.e. Satyayug, all of humankind was engaged in spiritual practice and the average spiritual level of people was 80%. They conducted themselves with the attitude that every aspect of their life is spiritual practice and a chance to serve God. When the mini-Kaliyug in the last mini-cycle of Satyayug began, the total number of evildoers on Earth became more than 2% of the entire population. The subtle Tama component was high enough for the evil forces at that time to make their claim for supremacy. This was the first battle between the good vs evil forces and it was waged at the end of this mini-cycle Kaliyug in the last mini-cycle of the Satyayug.

Continued in Part 2: Present battle between good and evil