The common ghost (bhoot or bhūt) is the lowest in the hierarchy of ghosts. It has a relative strength of 1. (Refer to the article on Types of ghosts) In the present times and up to 2025, about 30% of people in society are affected or possessed by common ghosts.

2. Drawing based on subtle-knowledge of the common ghost (bhoot) 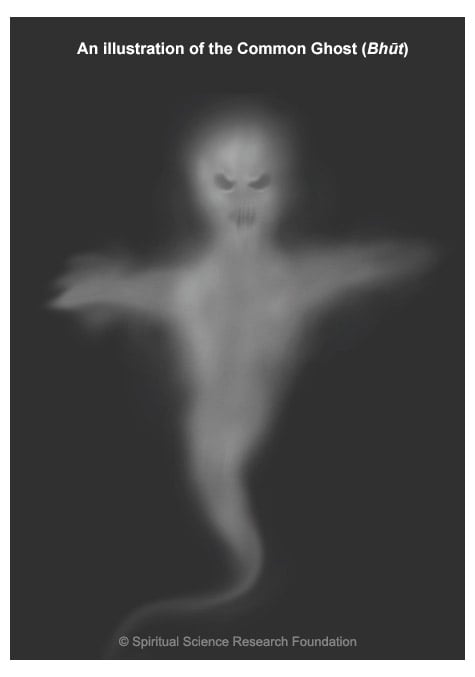 Please note that this is just a rough guideline, as ghosts can take up any form depending on what they are trying to achieve. Also refer to – Why is there a protective border around the above drawing based on subtle-knowledge of the common ghost?

3.1 Place of residence on the Earth region

Ghosts generally reside in premises that have the same frequency as the subtle-region of their origin or Raja-Tama vibrations that match their own. Common ghosts therefore take up residence in dilapidated houses, pubs, Raja-Tama predominant entertainment centres (to fulfill their desires), ditches, canals and houses where the residents have their type of habits and desires. Their place of residence can change on a daily basis.

3.2 Physical features of the common ghost

3.3 Mental features of the common ghost

3.4 Spiritual features of the common ghost

A common ghost and a departed ancestor (who has not become a ghost) are on the same level with regard to their spiritual strength. The main difference is that a departed ancestor troubles his or her descendants by making use of the give-and-take account between them, while a ghost troubles any human being using its black energy regardless of them being their descendants.

Note: The spiritual level of the spiritual healer has to be at least 20% more than the ghost affecting or possessing the person they is healing. When one is treated with external spiritual remedies, one feels better for a time, but to get rid of this distress (which in many cases follows us from many births) permanently, it is important to do spiritual practice and generate continuous and lasting positivity firsthand within us. Only then is it possible to get a permanent cure. If one complements the spiritual healing with chanting during the spiritual healing, then the distress is overcome in a shorter time.