Abstract: Drawings based on spiritual knowledge are an important tool in Spiritual research. They have the same place like X-rays have in medical science. They provide an authentic glimpse into the subtle world for those who cannot look into it by themselves. The Spiritual Science Research Foundation (SSRF) has used the gift of sixth sense or ESP of many of its seekers to gain an insight into the subtle world and record it for the benefit of humanity. It has used it as a diagnostic tool to understand the causative spiritual factors behind various difficulties in life. It has also used this tool to validate the effect of the various spiritual healing remedies innovated by SSRF. In this article, we present a comprehensive view about drawings based on subtle-knowledge.

1. What are drawings based on spiritual knowledge? 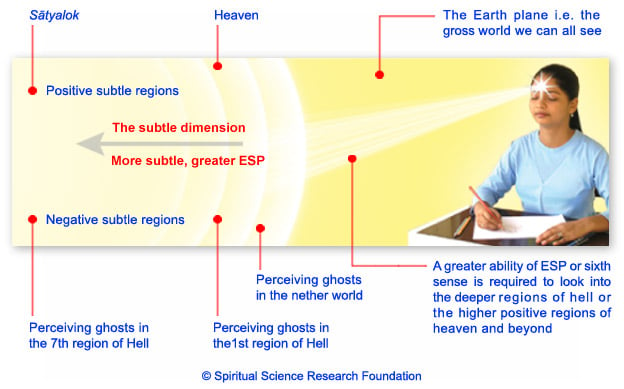 Some seekers of Spiritual Science Research Foundation (SSRF) have a highly developed sixth sense. Extrasensory perception (ESP), subtle perception ability, psychic ability, clairvoyance, premonition, intuition are all synonymous with sixth sense. With their sixth sense they are able to look into this subtle-world and see what ordinary people cannot see. Depending on the depth of their sixth sense ability they can perceive the subtle world to varying degrees and in varying detail. Also they are able to cross the barrier of time and place. This means that the drawings based on subtle-knowledge they create can be of events that have taken place in the past or anywhere in the world without them having been there or having known the people or their background in any way. Drawings and illustrations of what has been perceived by these seekers in the subtle-dimension are called drawings based on subtle or spiritual knowledge. The drawings based on subtle-knowledge are captured initially in the form of rough pencil sketches as the seekers with the help of their sixth sense (ESP) look into the subtle world. Later the sketch is rendered into a computer-generated artwork for publishing.

2. Who can create drawings based on spiritual knowledge?

These people are known as subtle artists or clairvoyant artists. Generally persons at a spiritual level of 40% or more and with a developed sixth sense, especially the subtle sense of vision, can perceive the subtle-dimension. These people can actually see the unseen subtle world just as we see the physical world. Some of these persons are also talented artists and can also accurately present what they see.

The accuracy of the drawings improves with:

3. About the drawings based on spiritual knowledge of ghosts published on SSRF

The following table gives some details about drawings based on spiritual knowledge of ghosts (demons, devils, negative energies, etc.) published on the SSRF website. It shows two scenarios.

Footnotes: (for the numbers in red) 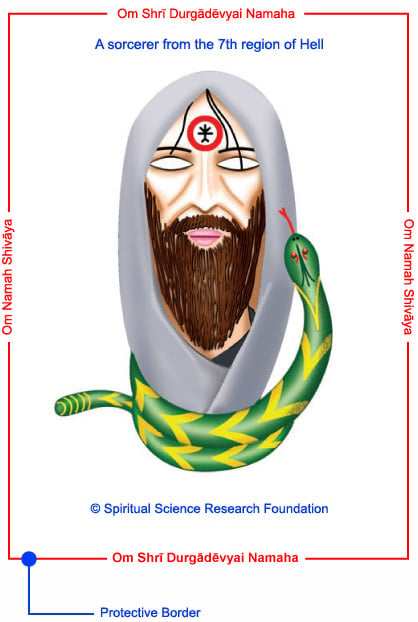 You will notice that we have provided a protective border around each of the drawings based on spiritual knowledge depicting negative energies and in some cases around the entire article. Each side of the border has the Name of a specific aspect of God in it. We have obtained this Name through advanced sixth sense. The reason we have employed a protective border is to counteract any harmful subtle-vibrations emitted by the drawings based on subtle-knowledge or the text about negative energies. As a result our readers are protected from these subtle negative vibrations.
Also note that the colour of the border varies according to the Name of the Deity used in the border. The reason for this is that through spiritual research we have found that a Deity (aspect of God), in the spiritual dimension, is represented by a certain colour. By using this same colour in the border, we increase the ability of the border to attract the Divine protective Energy of the Deity.
Please do conduct subtle-experiments on these protective borders.

5. What decides the percentage of Truth in the drawings based on spiritual knowledge?

The following is a complete breakdown of all the various factors that can affect a subtle-artist’s (clairvoyant artist’s) accuracy of illustration.

As you can see from the table above there are many factors that can come in the way of creating accurate drawings of the subtle-dimension.

Quite often we come across subtle-artists (clairvoyant artists) who draw spirit guides or angels from the subtle-regions for people. In almost all cases, these drawings are ghosts (demons, devils, negative energies, etc.) providing false images to the subtle-artists (clairvoyant artists). As the subtle-artist themselves are not spiritually evolved and nor do they have a spiritually evolved guide quite often they are led astray by ghosts with higher spiritual strength. The unsuspecting person who thinks they have a drawing of their angel in fact has a drawing of a ghost from one of the regions of Hell. The drawing when taken home becomes a conduit for the ghost to emit black energy.

6. How do we validate drawings based on spiritual knowledge?

SSRF seekers have used the following techniques to verify their ability.

7. Some salient features of drawings based on spiritual knowledge by seekers of SSRF

Most subtle-artists (clairvoyant artists) with subtle-vision see figures in black and white. In most cases, they are able to perceive only the grossest part of the subtle-dimension. For example, how does a ghost from the Nether region look like. Subtle or clairvoyant capability to see ghosts from the deeper regions of Hell which is far more subtle would be beyond their reach.  Seekers of SSRF have been graced with the ability to perceive the subtle-dimension in most minute detail and in colour. Seekers of SSRF are also able to perceive deeper dimensions like the region of the ghost, what he is doing at that particular moment, why he is doing it, on whose orders is he is doing it , what is the mechanism of action behind what he is doing etc.

Everything is not what it seems in the subtle-dimension. For example, if a subtle-artist thinks they are getting a vision of a spirit guide it could well be a ghost that is providing them with a false image. In the subtle-dimension one ghost is controlled by a higher ghost. It is quite common to have multi-levels of control. To be able to successfully find the subtle-sorcerer in the 7th region of Hell responsible for the act of the lower ghost, one would need the highest levels of sixth sense (ESP).

Please refer to the article on “The depth of ability to perceive paranormal activity with our sixth sense”.