1. Introduction to the phenomenon of the mango tree with different coloured leaves

Would you expect one half of a tree to be fresh green, while the other side is dull green ? Can two parts of a single tree behave completely differently and in stark contrast to one another at the same time ?

In all probability your answer would be no.

However, in April – May 2019 this is exactly what happened in the case of a mango tree just outside the front gate of the Spiritual Research Centre and Ashram in Goa, India. Remarkably, the side facing the Ashram had fresh green leaves, while the other side had dull green leaves. 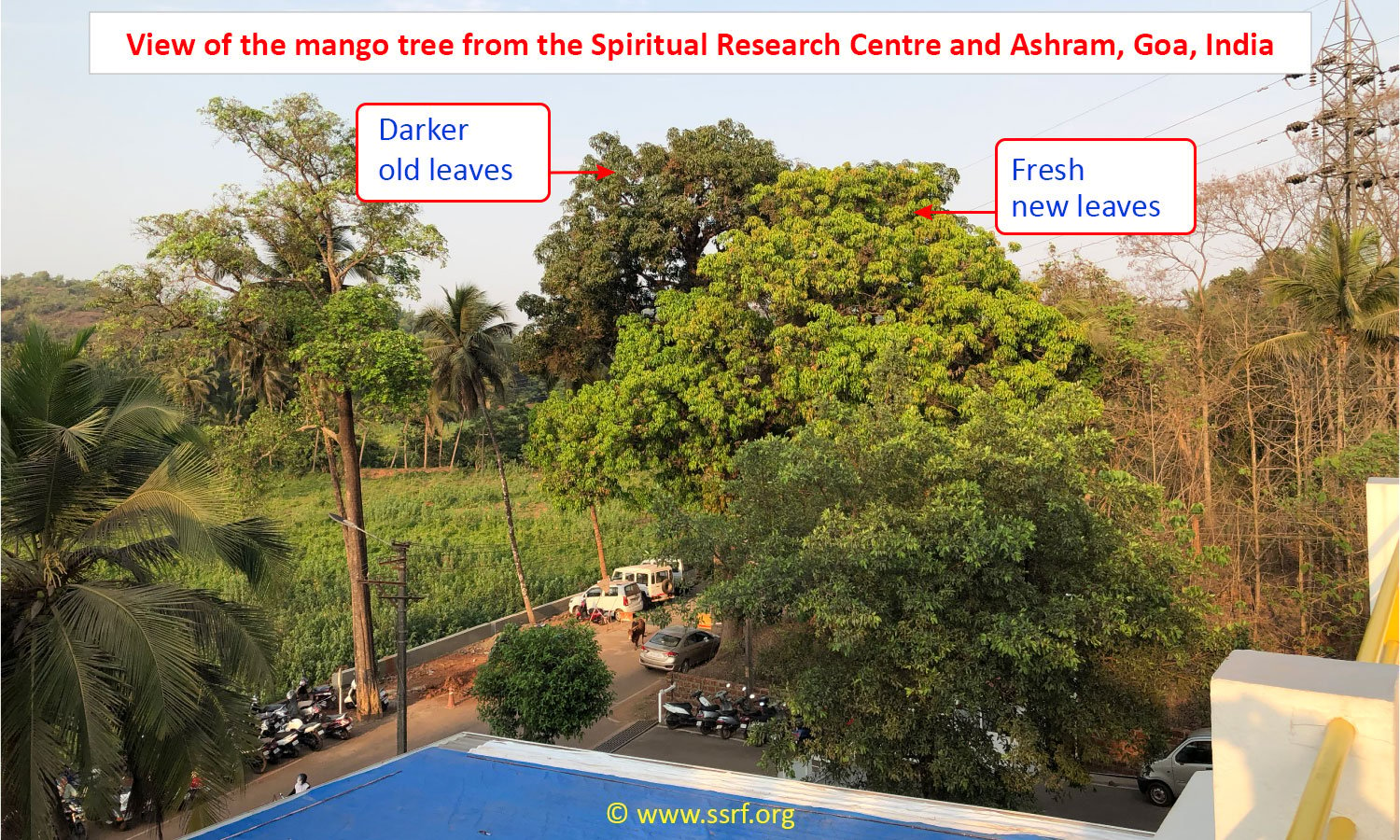 Looking at the mango tree from the balcony of the Ashram, the difference between the two sides of the tree was so evident and intriguing that the spiritual research team decided to investigate the reason for the phenomenon. The research findings are presented in this article along with photographs of the mango tree (at every stage) that show the clear difference between each side of the tree.

On 18 April 2019, the leaves on a mango tree next to the Spiritual Research Centre and Ashram in Goa, India turned reddish brown. 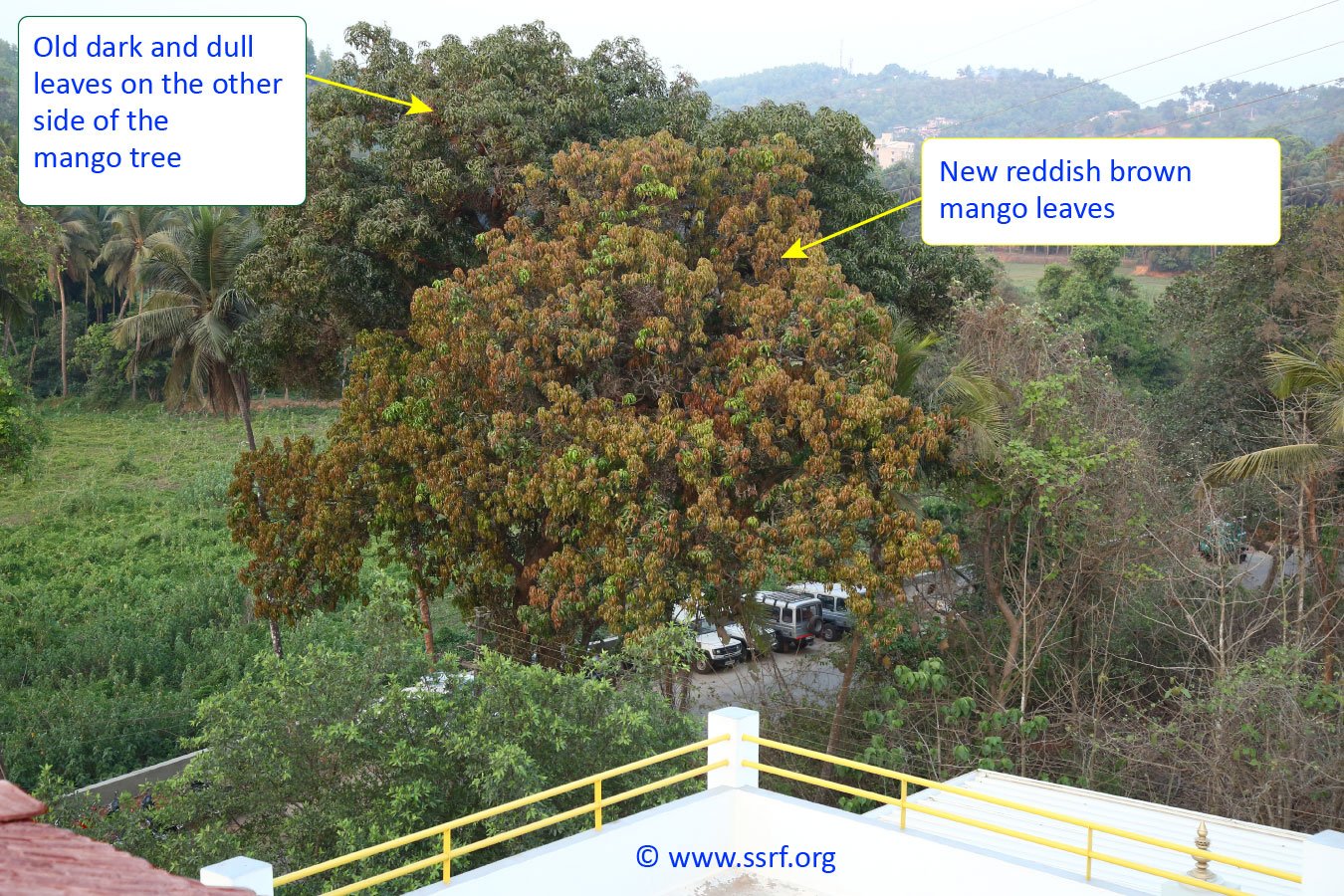 This is a normal part of the mango tree’s cycle of shedding old leaves and growing new ones. The appearance of reddish-brown leaves signifies the growth of new leaves.

Later, on 23 April 2019, the leaves on the half of the mango tree facing the Spiritual Research Centre and Ashram turned bright green (shown below). Meanwhile, the leaves on the other side of the tree continued to be a dull dark green. Even though the tree is one, its two halves behaved differently. 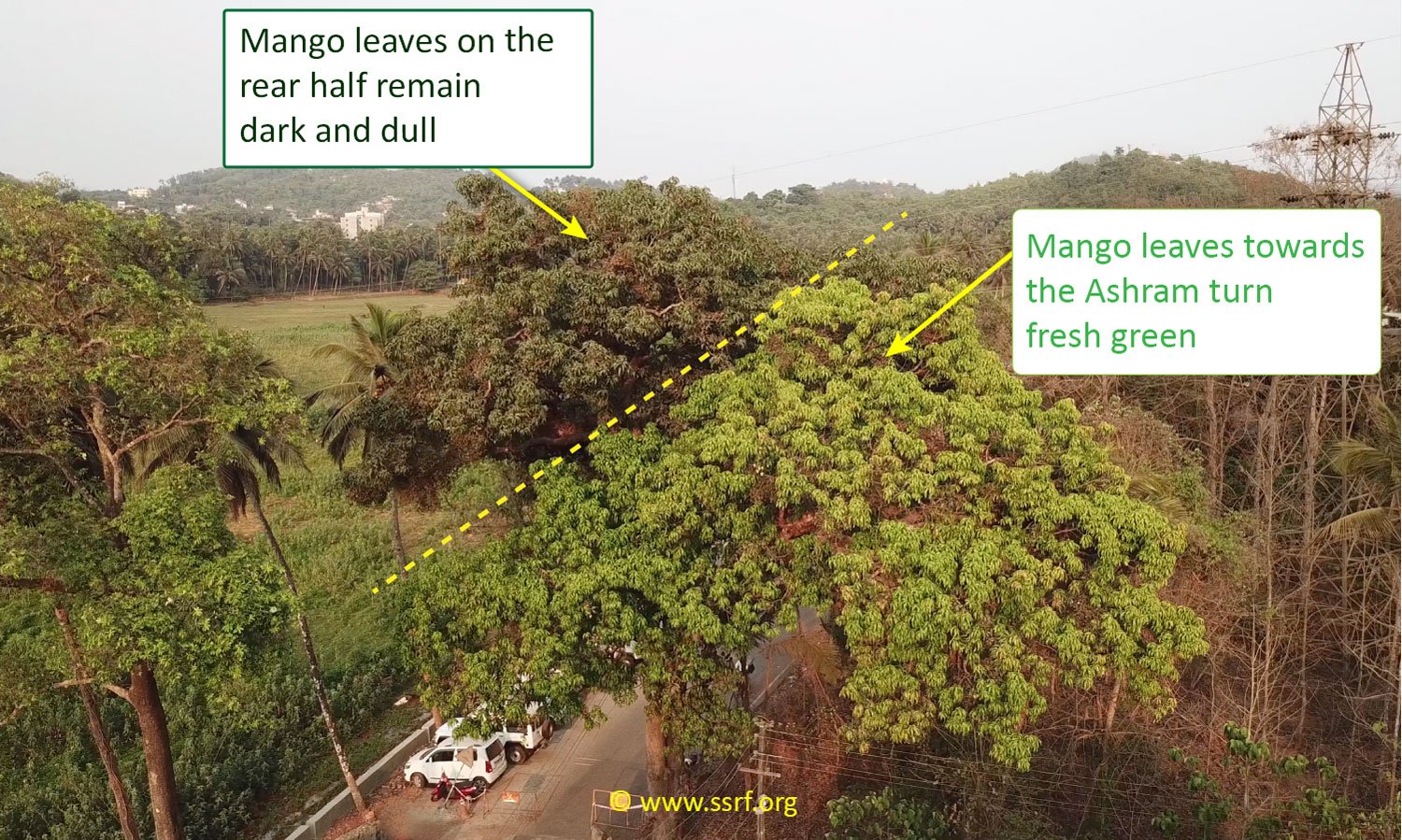 There are some potential physical causes for such a phenomenon such as extreme weather, overly compact soil, exposure to chemicals, poor water absorption from roots and a type of fungus known as verticillium wilt, but to the best of our knowledge, none of these potential causes were present. Having eliminated any possible physical reasons for this, the research team conducted spiritual research to understand the cause of the phenomenon.

The spiritual research team used an aura and energy scanner known as the Universal Thermo Scanner (UTS) along with the advanced sixth sense of its seekers to analyse the leaves of the mango tree.

Four sets of leaves were analysed, and their details are provided below.

1. From the mango tree in front of the Ashram (see picture below) :

1A. Dark green old leaves (that were on the opposite side of the Ashram)

1B. Fresh green leaves (that were towards the Ashram) 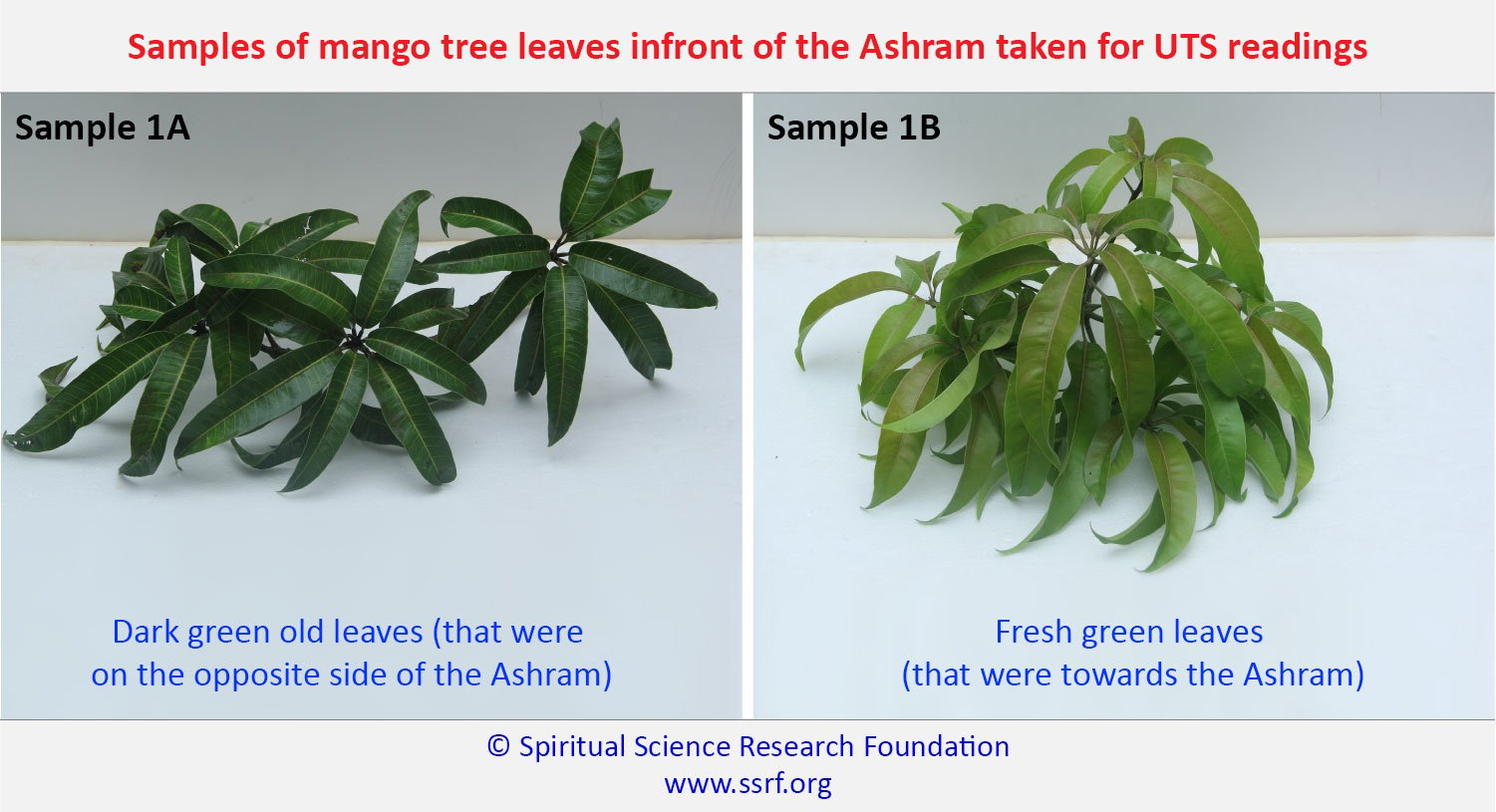 In addition, we also selected leaves from another mango tree a few kilometres from the Ashram to compare the above samples.

2. A randomly selected mango tree a few kilometres from the Ashram.

Both leaf samples 2A and 2B were from the same tree. 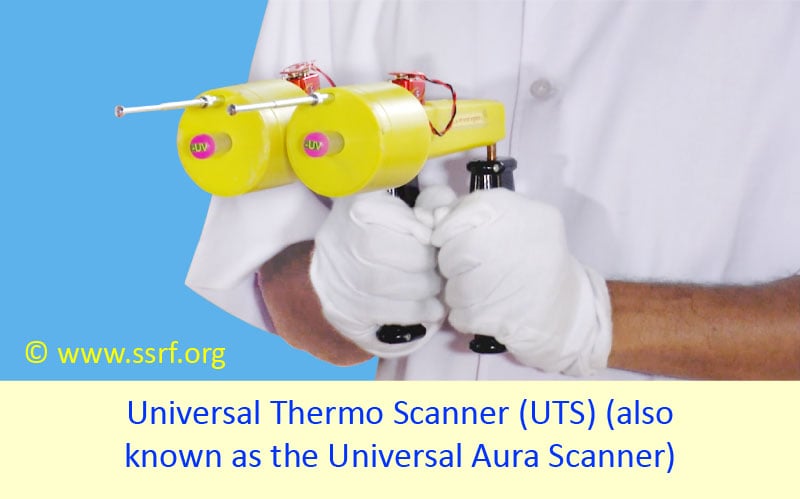 The Universal Thermo Scanner (UTS) (also known as the Universal Aura Scanner) was used to take readings of the leaves. The UTS is an instrument developed by Dr Mannem Murthy (a former nuclear scientist) and is used to measure the subtle-energy (positive and negative) and the aura around any object (living or non-living). UTS readings give data about the negative aura, positive aura and the measured aura around the object being measured. Please refer to the article on – the Methodology of UTS readings (coming soon) to learn more about how UTS readings are taken and what they mean.

There are 4 types of UTS readings which are described in the table below :

The research team has used this instrument extensively, i.e. something like 10,000 readings of objects over a 5-year period have been taken, and it has been observed that the UTS is quite accurate and corroborates with readings obtained through sixth sense.

In the following table, the readings obtained via the UTS have been listed for the 4 samples of leaves. 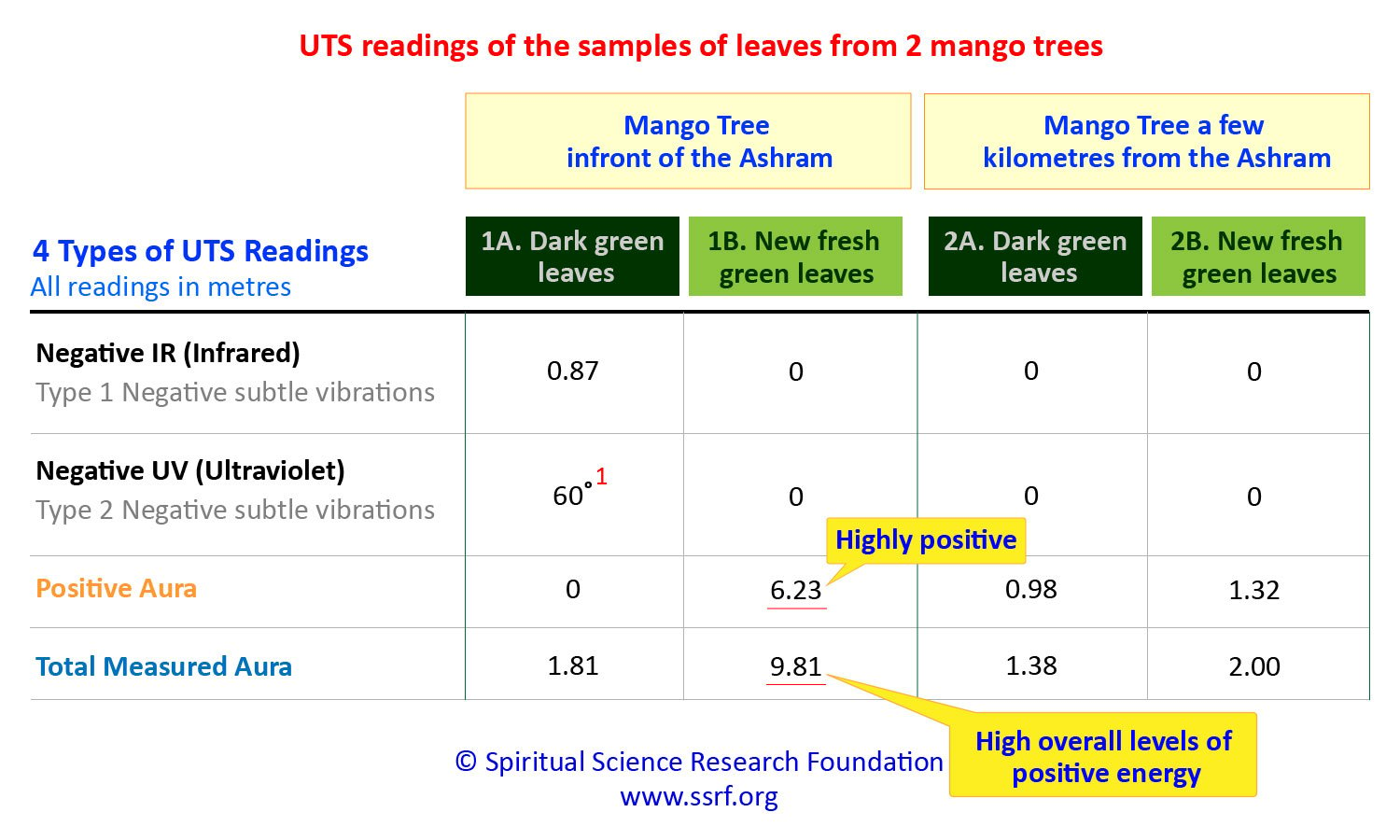 While readings from aura and energy scanners such as the UTS can provide an indication of what is going on at the spiritual level, they cannot provide definitive answers about it. In order to obtain these answers, one needs to resort to gaining knowledge through the medium of an advanced sixth sense. Some members of the spiritual research team have access to such advanced sixth sense, and answers obtained by them are provided below.

Many experiments (conducted using aura and energy scanners and advanced sixth sense) have shown that the Spiritual Research Centre and Ashram has extraordinarily high levels of positive energy. For example, from over 650 soil and water samples collected from around the world (as of Jun 2019), the Ashram’s samples were found to be the most positive and dominated the listings of the top 10 soil and water samples worldwide.

The reason for this is primarily due to many Saints and seekers who reside in its premises and practise Spirituality as per universal principles. The Ashram has become a beacon for the spread of Spirituality worldwide and as a result attracts and emits God’s Divine energy and Divine consciousness (Chaitanya). The seminal spiritual work and research taking place here is paving the way for the establishment of the ‘New Era of Spiritual Awakening’ that will commence in 2024.

The other half of the tree facing away from the Ashram had old dark leaves which the UTS recorded as having negative vibrations. Why is this so ?

In the years 1999-2023, the world is in the midst of an increasingly intense subtle battle between forces of good versus evil. Higher level negative energies increase the spiritual impurity (Raja-Tama) in the environment. The Ashram is constantly targeted by higher level negative energies, who try to impede the spread of Spirituality. The mango tree is sensitive to such changes and is affected negatively by abnormally high increases in spiritual impurity (Raja-Tama) in the environment. As a result, the side of the tree which is facing away from the Ashram has succumbed to such negative subtle attacks and its leaves have turned dull with a darkish hue to them. This negative attack was picked up by the UTS which recorded negative readings from the leaves opposite to the side of the Ashram.

The phenomenon of the 2 sides of the mango tree behaving differently is a microcosm of the larger subtle battle that is ensuing in the spiritual dimension and Earth. While the tree was attacked by negative energies, the attack was limited to only one half of the tree. The other half was protected due to exposure to the highly positive vibrations emitted from the Ashram.

3.3 Subtle picture of the mango tree 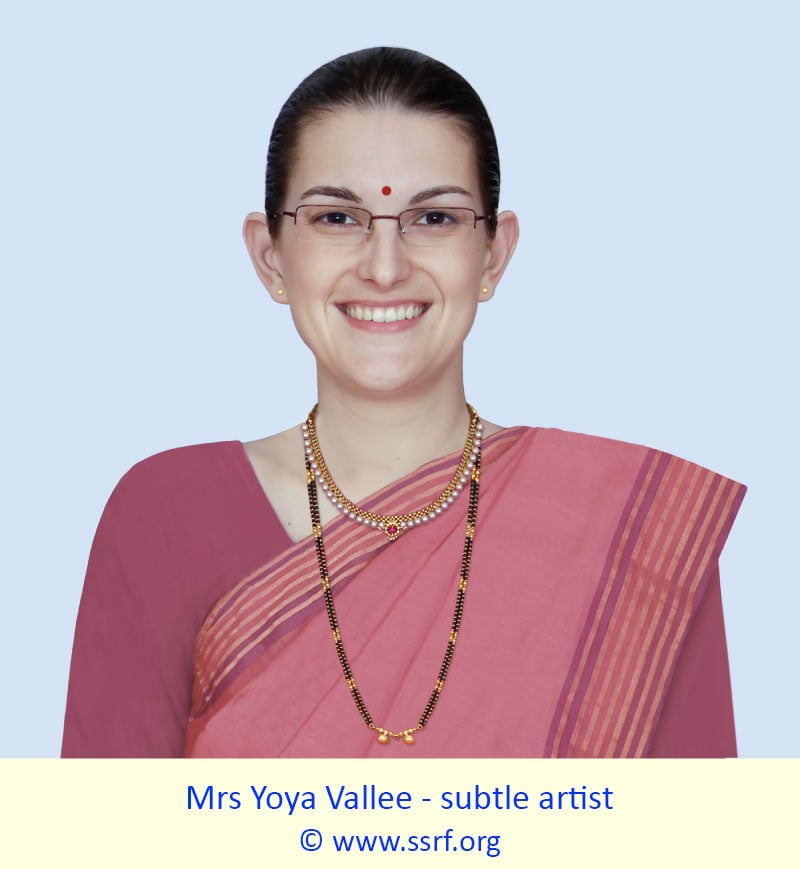 One medium of receiving Divine knowledge is in a visual format. The seekers who receive knowledge in such a manner are known as subtle-drawing artists and they can visually perceive the subtle-process during an experiment or situation and draw what they see and feel. These drawings are akin to spiritual X-rays and provide the average person with an unparalleled visual view into the spiritual dimension.

Mrs Yoya Vallee, a subtle-drawing artist, is one seeker who receives Divine knowledge in a visual format. Her subtle-analysis of what is happening to the Ashram mango tree in the subtle is presented in the subtle-picture below.

The side of the mango tree facing the Ashram is being exposed to highly positive vibrations, and this is evident from the subtle picture below. 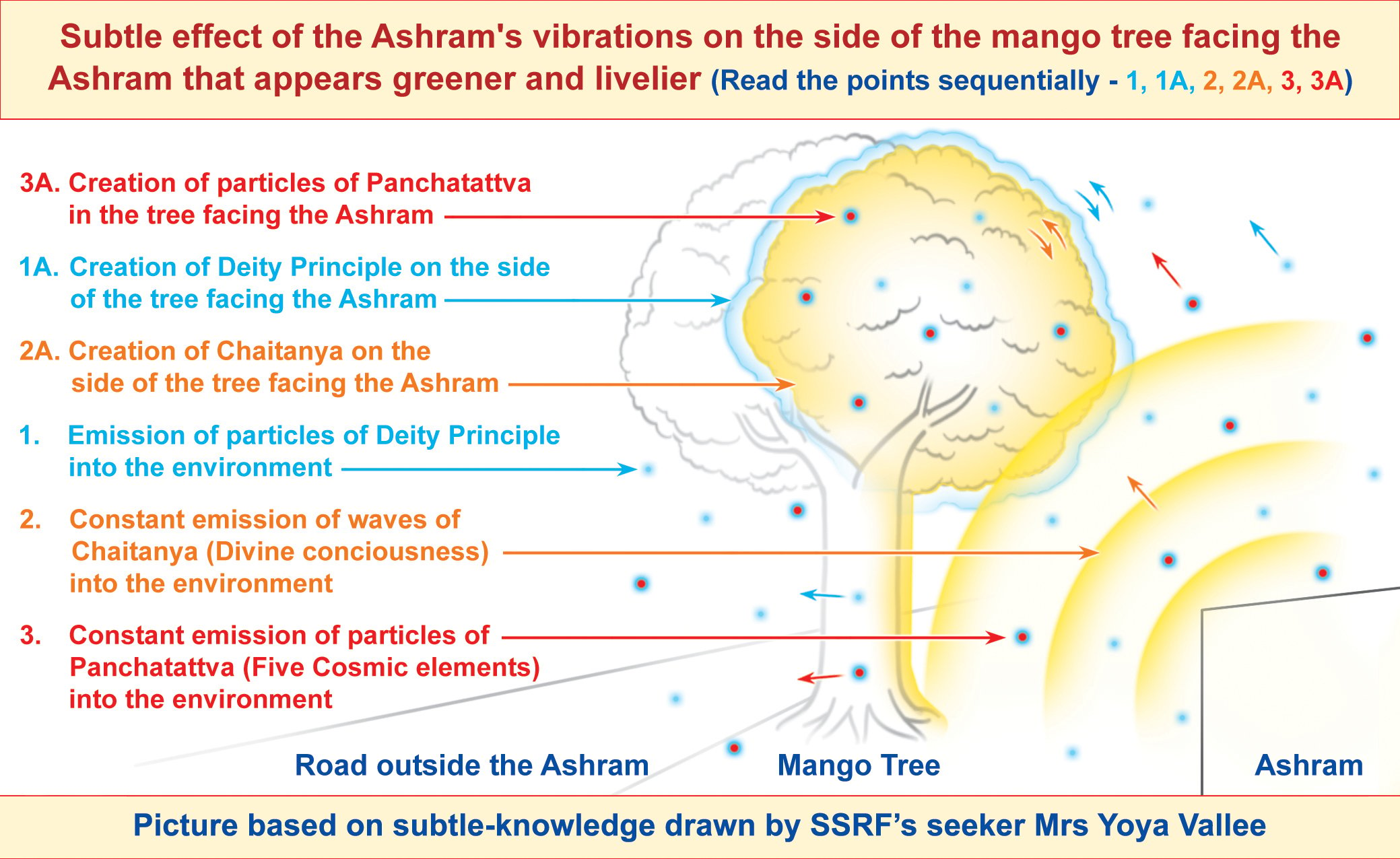 On the other hand, the side of the mango tree facing away from the Ashram is exposed to a continuous flow of distressing energy and this process is depicted below. 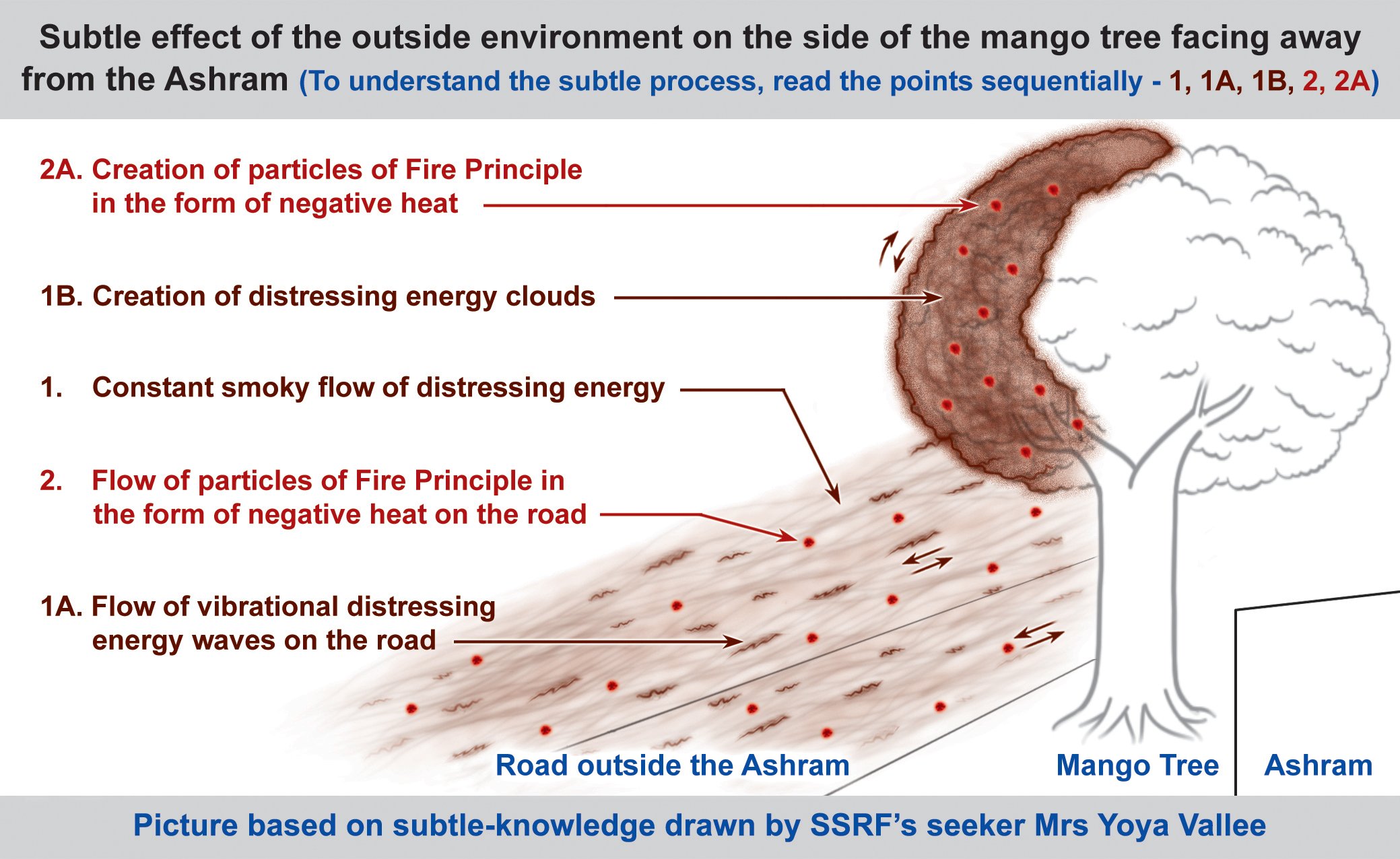 For the trained eye, the Ashram has levels of positivity that are difficult to find anywhere else in the world. This is why when Saints visit the Spiritual Research Centre and Ashram, they say that it is a tirthsthan (a holy place worthy of pilgrimage). The mango tree in front of the Ashram is a living example of how nature (flora and fauna) can recognise spiritual positivity and responds to it by flourishing. Sadly, humans nowadays lack this capability of recognising spiritual positivity and for this reason many passers-by would not even look in the Ashram’s direction. It begs the question – if plants can understand spiritual positivity, then why can’t humans?

By undertaking regular spiritual practice, anyone can develop the ability to feel the predominant subtle vibrations in a place – good, neutral or bad. It is an important capability to develop and to have because it alerts and protects one from going to places with negative vibrations regardless of how visually attractive, they may be. On the other hand, such a capability allows one to understand the true worth of places like the Spiritual Research Centre and Ashram, in Goa India, and hence, it becomes an important first step towards deriving the immense benefit from such places.