A spiritual study of soil – Part 1 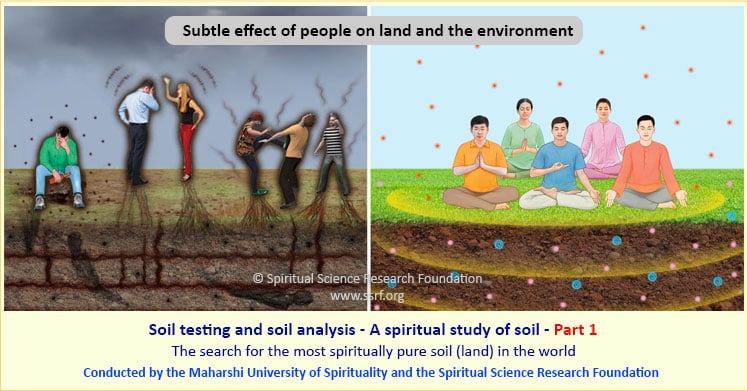 There are many factors that contribute to the evaluation of land. Yet when purchasing land, engaging in property development or simply visiting places for business or pleasure, one rarely thinks about the subtle-effects of the land and the impact it can have on a person. The team at the Maharshi University of Spirituality has 37 years of spiritual research experience. This research has been conducted by using aura and subtle-energy scanners along with the advanced sixth sense of its research team. Using these methods, 169 samples from around the world have been analysed so far. The soil samples were from eight types of areas, which included urban and rural areas and also popular tourist sites. It was found that most of the soil samples from around the world emitted negative vibrations. The only exception was India where some positivity was found. The main reason for the prevalence of negative vibrations in the soil samples is the effect mankind is having on the environment at the physical, psychological and spiritual levels. The soil samples from some developed nations emitted more negative vibrations as opposed to the soil samples from some developing ones. It was found that the subtle vibrations from land can vary substantially based on factors such as people’s collective thoughts and actions, for what purpose the property is used and the level of materialism prevalent in that area. It was also noted that time (era) is a factor that can influence the subtle vibrations emitted from land. While subtle vibrations from the land affect people, it is more the people themselves who live on that land that enrich or pollute it at the spiritual level. Understanding the subtle aspects of land can help in making better  choices while procuring land. Spiritual practice helps to protect one from negative subtle-vibrations of land and increases its spiritual purity.

1. Introduction to the evaluation of soil and land

There are many factors that contribute to the evaluation of land. Yet when purchasing land, engaging in property development or simply visiting places for business or pleasure, people rarely think about the subtle-effects of the land and the impact it can have . Yet, our research has shown that the subtle effects of soil and land can have a significant impact on residents.

Consider the example of tourists who flock to popular places that have historical significance. They mainly view such locations from a holiday and sight seeing perspective. However, if some of these places have seen violence in the past, the environment still retains the memory of that terrible time and the unsuspecting tourist is affected by those negative subtle vibrations. This is how land and water are affected by various human activities and also the thoughts and behaviour of society.

2. Experiment to study and analyse soil from a spiritual perspective

Multiple studies published in peer-reviewed scientific journals show that over 97 percent of actively publishing climate scientists agree that climate-warming trends over the past century are extremely likely to be due to human activities (NASA.gov). In our 2007 article published on the SSRF website, we provided a holistic insight into the causes of climate change. The article shared our findings through spiritual research that humanity’s effect on the Earth and the environment is not only because of physical reasons (as most people would assume), but more so at the psychological and spiritual levels. Spiritual research shows that humanity is adversely affecting the environment at the spiritual level and this is causing the Absolute Cosmic Principles of Earth, Water, Fire, Air and Ether to respond to this rise in spiritual impurity, thus causing a higher intensity of natural disasters. It is nature’s way of cleansing the planet.

With the advancements in aura and subtle energy scanners, it has now become more possible for us to measure the subtle vibrations emitted by objects (living and non-living) such as soil. This gives us tangible evidence as to how humanity has affected the environment, which includes the soil and waterways along with flora and fauna.

In February 2018, the Maharshi Adhyatma Vishwavidyalay (also known as the Maharshi University of Spirituality) and the Spiritual Science Research Foundation commenced a study of soil from a spiritual perspective. The purpose of the study was to analyse soil from around the world and to gauge differences in subtle vibrations based on region and location. It was designed to assess the spiritual status of the environment in the current era.

The spiritual research team requested seekers and well-wishers travelling to the Spiritual Research Centre and Ashram to obtain small amounts of soil and water samples from around the world. Specific instructions were provided for the collection, packaging, transportation and the subsequent handing over of these samples to the spiritual research team for measurement.  The reasons for the instructions were primarily to ensure that :

The measurement of the subtle vibrations and aura of the soil samples was undertaken using the Universal Thermo Scanner (UTS). It is an instrument developed by Dr Mannem Murthy (a former nuclear scientist from India). The UTS is used to measure the subtle energy (positive and negative) and the aura around any object (living or non-living). The negative subtle energy readings are of 2 types and are denoted by IR (infrared) and UV (Ultra-violet). The IR reading measures the lesser form of negative vibrations and the UV reading measures the more intense form of negative vibrations and it is usually related to negative vibrations at the level of demonic possession. Over a 5-year period, the spiritual research team has used this instrument extensively, conducting approximately 10,000 subtle energy and aura readings of various objects (living and non-living). It has been the team’s experience that the UTS is quite accurate and UTS readings taken by the research team have corroborated the team’s readings obtained through sixth sense. Read more about the Universal Thermo Scanner (UTS) – Coming soon

It is important to note that while instruments like the UTS are great spiritual research tools, a true measure and analysis of subtle vibrations from any object (which in this case are soil samples) can only be conducted via sixth sense which needs to be of a very advanced level.

The following are some pertinent details with regard to the soil samples that were collected and analysed for this article.

As the samples started to pour in, one trend became quite apparent. Using the UTS, the samples were observed to be recording more negative subtle energy readings than positive subtle energy readings. In fact, the 8 samples (from the Spiritual Research Centre and Ashram) had to be excluded as their high levels of positivity were skewing the results and statistical data (such as averages) obtained from the analysis.

After extracting the 8 samples of the Spiritual Research Centre and Ashram from the initial analysis, 161 soil samples remained. Some key statistics about the remaining 161 soil samples obtained from 24 countries are provided below. 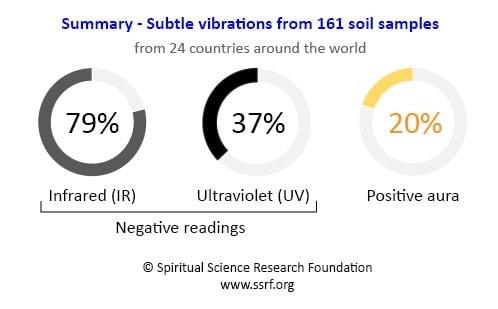 This means that 79% of samples either had a negative IR aura or had some level of negativity associated with them.
2. Negative aura (UV) from the soil samples

3.  Positive aura from the soil samples

Observing the readings across all types of soil, this chart shows the maximum negative reading obtained in each category. (Please note that UV indicates a greater intensity of spiritually negative vibrations.) 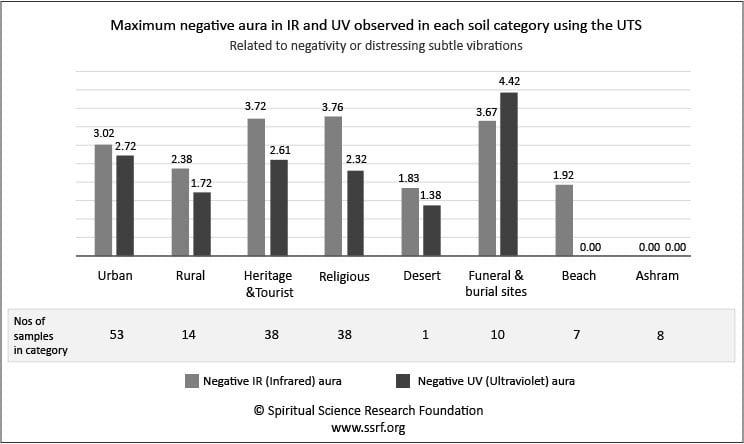 Please note : The scale for inanimate objects in terms of spiritual positivity and negativity is + / – 6% respectively. What this means is that graveyards at -10% are literally off the charts in relation to negativity and that they have a significant adverse impact on the land and the environment that can last for decades and in some cases centuries. Refer to our article on cremation versus burial.

So far, this study indicates that soil samples from around the world are likely to be more negative than positive. With the exception of India where pockets of positivity were found in all the types of soil samples, the readings for the rest of the nations were largely negative. The next part of this study, covers :