1. Introduction to cremation vs burial

Every year more than 50 million people die worldwide. The two main forms of funeral rites adopted by most are either cremation or burial. The Parsis (Zoroastrians) in Mumbai, India, a small community, leave their dead out in the open in the Towers of silence to be consumed by vultures. In the past some civilizations would embalm their dead in the process of mummification. Through spiritual research methodologies, we have examined the effect of cremation vs burial as well as the Zoroastrian tradition of leaving the dead in the Tower of Silence.

A popular concept is that after death the soul goes towards the light or has its loved ones waiting on the other side to welcome them etc. However, to understand the true experience of a subtle-body who has just left its gross body (sthūladēha) after death, we recommend that you read the following 3 articles before resuming reading this.

Having read these articles, one will have an understanding of how ancestors can be in a state of distress in the afterlife and how they can be helped. Another popular belief is that our ancestors who pass on are in a position to help us on Earth. However this is far from the truth. Most of our departed ancestors are desperately in need of help themselves. The only people who can do something for them are their descendants on Earth. The only way to get the attention of their descendants is to harass them. This harassment can come in many forms until they reach a point where the descendant is cornered into doing some spiritual practice which would go towards relieving the distress of the ancestors.

To understand this further please read:

The method of disposal of the dead can contribute to or alleviate the distress that the ancestor has to go through in the subtle-realm.

Why is the question of cremation vs burial pertinent? Sometimes people weigh the pros and cons of different forms of funeral rites based on its impact on the environment. This is one yard stick to use. However, the most damage is done in the spiritual environment when a spiritually detrimental funeral rite is performed leading to further distress to the subtle-body of the dead ancestor.

2. The circumstances of the physical body after death and why the question of cremation vs burial applies

The concept of attachment for ones gross body:

When a person dies, he is unfamiliar with all the experiences of the afterlife as one will understand from the article – The region of death. Thus he clings to the body he knows and the world he came from, even though he is dead. This is heightened when the body is kept completely intact as happens when the body is embalmed or frozen for a delayed funeral. The subtle body associates itself with its gross body and thus finds it that much more difficult to detach and proceed on its onwards journey as it cannot leave its prior ‘home’ – its gross body.

Vibrations around the dead body that attract negative frequencies:

At the time of death, excretory gases are expelled from the dead body. These excretory gases are regular physical gases expelled by the body such as putrefying gases etc. Since they are gases exiting a decaying body, their frequencies and vibrations are negative in nature and as a result the tama component increases in the immediate surrounding environment. Ghosts (demons, devils, negative energies, etc.) get attracted to these negative frequencies and enter the environment around the dead body. 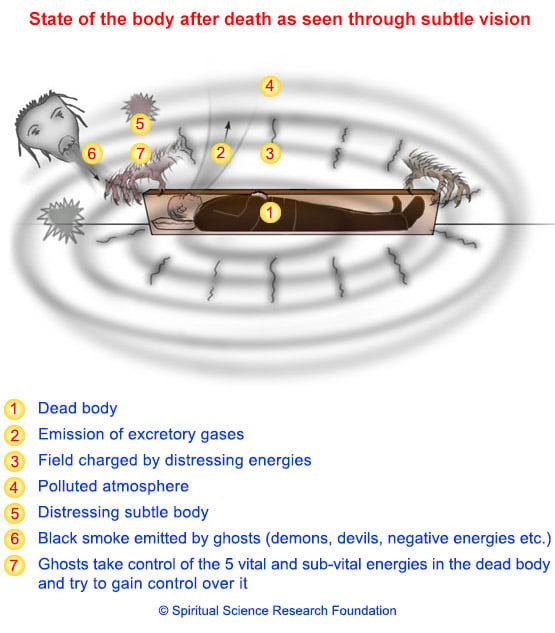 Ghosts attack the dead body by gaining control over the five vital energies and sub-vital energies, which are in the process of being released into the Universe from the body at the time of death. They emit black energy in the form of smoke on to the dead body, engulfing it and creating a black covering on it. This smoke is invisible but can be perceived through one’s sixth sense (ESP). Due to the attacks by ghosts, there is a transmission of black frequencies into the dead body and the corpse gets charged with these black frequencies.

After the ghost gains control of the gross body and five vital energies and sub-vital energies, it turns its attention to capturing the subtle body of the dead person. 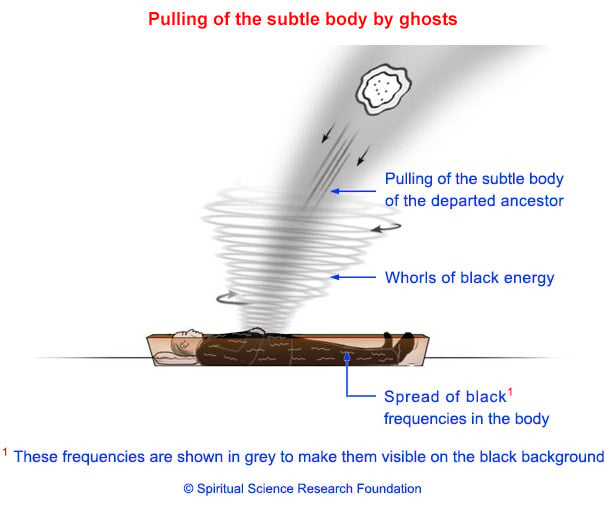 From a spiritual perspective, the main aim of a funeral rite should be to accomplish the following:

The information given below along with the drawings based on subtle-knowledge have been provided by Mrs. Anjali Gadgil, a seeker in SSRF with a highly advanced sixth sense. The information and drawings based on subtle-knowledge have been obtained from the Universal Mind and Intellect and show the exact sequence of subtle events when a person is buried vs cremated. Information has also been received on the tradition of the Tower of Silence.

3. Cremation of a body vs burial

Cremation is the practice of disposing of a corpse by burning.

At the outset, it is important to note that the cremation needs to be done at the earliest and preferably before sunset. If the person has died at night, then one can wait till the morning to conduct the cremation. By expediting the funeral process itself, we minimise the impact on the dead body by ghosts (demons, devils, negative energies, etc.).

The following is the sequence of events that were observed: 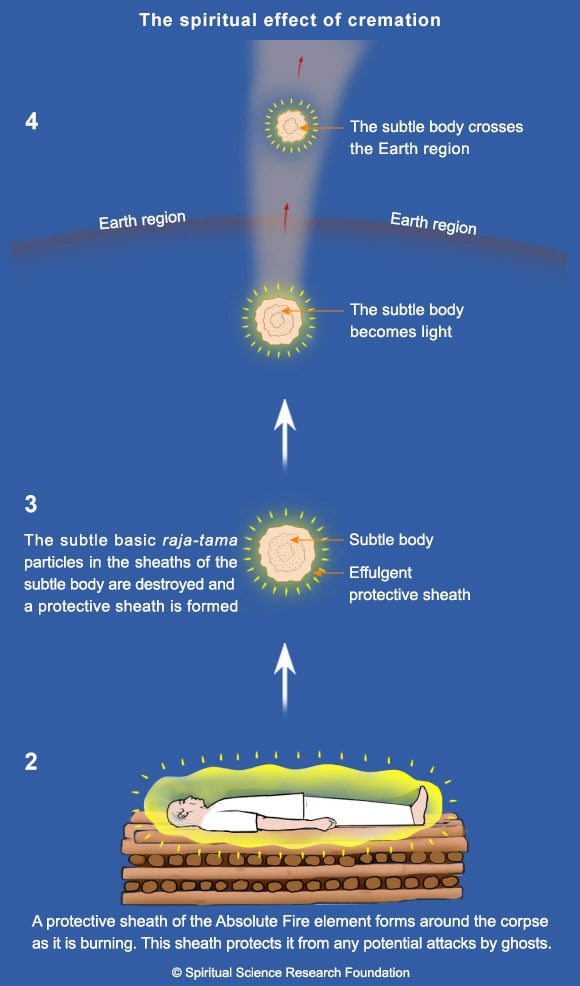 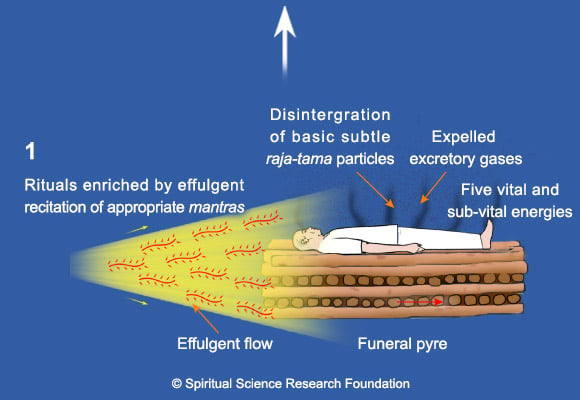 A quick analysis of cremation shows that it meets all the criteria for the effectiveness of a funeral rite.

If a body is incompletely burnt, it still faces the risk of attack by subtle-sorcerers (māntriks).

Also read: “What is the spiritual perspective on scattering of ashes from a cremation urn?“

Casket (coffin) manufacturers generally manufacture caskets with seamless welds and rubber gaskets. These caskets are known as ‘sealed’ caskets. The caskets are made in such a way so as to keep out water, soil and air. However they also succeed in trapping all the excretory gases in the coffin. The subtle pressure in the coffin rises as the distressing frequencies emanating from the corpse materialise within the coffin and are transformed into a black sheath around the body. This materialisation process generates distressing, frictional, hot frequencies. These frequencies generate a subtle distressing sound that attracts ghosts (demons, devils, negative energies, etc.).

The ghosts enter the coffin and gain control over the five vital energies, sub-vital energies and begin the charging of the corpse with a covering of black energy. As the body is buried adjacent to the ground, it attracts distressing frequencies from the Hell region (Pātal) that form a dome of black frequency chords over the corpse. Ghosts use the control that they have over the gross body, five vital energies and sub-vital energies to gain access to the subtle body. Over time, with the inundation of black energy by ghosts, the heaviness of the subtle body also increases. The subtle body is pulled towards the coffin and gets trapped in it and falls prey to the attacks by ghosts.

As the subtle bodies of the buried are trapped in the Earth region their probability of becoming ghosts is more than in those where the body is cremated. Even if the person has led a relatively good life when alive, just by the very act of burial, his probability of becoming a ghost much against his own will increases manifold. Under the influence of other ghosts, he is forced to commit acts wherein his demerits rise relegating him further to the lower regions of the Universe. 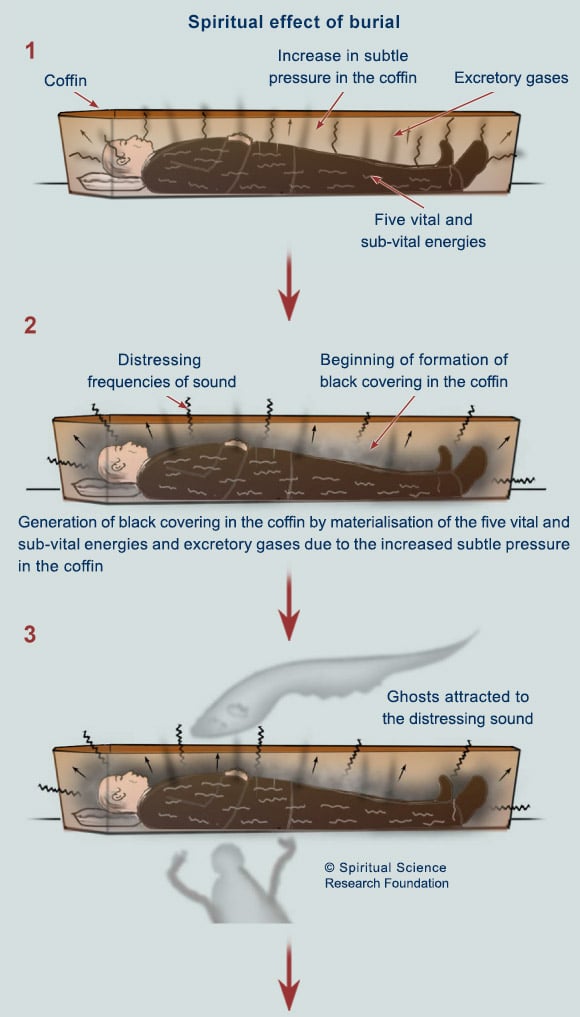 A subtle-analysis of the burial method shows that it does not meet any of the criteria for the effectiveness of a funeral rite.

5. Dead body being consumed by vultures

The Parsee (Zoroastrians) community disposes its dead by placing the bodies in a place known as the ‘Tower of Silence’. The tower is open to the sky as it has no roof. The corpse is subjected to the rays of the sun to decompose and vultures to eat it.

As the subtle-body is still attached to its gross body at the time of death, it undergoes agony when the body is torn by vultures and is decomposed.

For a body not to be used as a vehicle to attack the subtle-body, it needs to be destroyed completely and as soon as possible. Fire is the only element that can do this immediately. The five vital energies and sub-vital energies generally take a few days to finally leave the body completely. During this period, they can be used by ghosts as a means to get to the subtle body of the departed ancestor. The sun’s rays simply do not have the ability to destroy the body and nor do the vultures in a matter of days.

However something far more damaging happens at a spiritual level. In this method as the vultures attack the corpse, many subtle-sorcerers and ghosts are attracted to the smell of the blood, bones and flesh of the corpse. They use the blood and bones to do negative rituals to gain control over the subtle-body. By giving the corpse to vultures the entire body goes into the complete control of the ghosts and subtle-sorcerers in a very short time. They are more likely to become slaves of these subtle-sorcerers and suffer immensely in the afterlife. In this way, these subtle-bodies also do not attain momentum and easily go into the control of ghosts and thus to the Hell region. In addition, many ghosts fulfil their cravings and hunger for meat by eating the human blood and flesh through the medium of the vultures.

The subtle-sorcerers materialise the subtle distressing smell emitted through the blood and flesh and with the help of recitation of negative mantras give subtle form to that subtle body again. Then they give it a genie like form and make it perform many negative acts and thus trouble others severely.

A subtle-analysis of being consumed by vultures shows that it does not meet any of the criteria for the effectiveness of a funeral rite and is more harmful than burial.

6. The environmental perspective of cremation vs burial

On the face of it the funeral rite of burial of a person in a shroud or letting bodies be eaten by vultures may seem to be more eco-friendly than burial in a coffin or crematorium or funeral pyre. However in choosing the way we want our funeral rites done cannot be looked at purely from an environmental point of view. There are other spiritual considerations such as the attack of ghosts. By excluding the spiritual realm in our decision making on what funeral rite to choose and by keeping the body intact dramatically increases the chances of our departed to get attacked by ghosts.

Out of all the types of funeral rites to let go of a body, committing it to cremation is the most beneficial. People who have lived relatively good lives, by the very act of burial increase their risk of becoming ghosts in the afterlife.  Sometimes we are attached to the form of funeral rite that our culture is used to. However, the spiritual repercussions of burial vs cremation needs to be weighed against one’s psychological attachment for a certain funeral rite.

Where do we go after death