1. Background of the phenomenon

The Dattatreya Deity or Deity Datta is a form of God and one of His functions in the Universe is alleviating distress caused due to the subtle bodies of ancestors.

On 17-Sep-2015, as per the guidance of a higher-level Saint, seekers in the Spiritual Research Centre and Ashram in Goa, India began to recite the Dattamala mantra. The purpose of the recitation of the Dattamala mantra was to invoke the blessings and spiritual protection of the Dattatreya Deity. Over 20 seekers at a time would recite the Dattamala mantra in Sanskrit in the temple room (dhyan mandir) of the Ashram. It was recited 20 to 24 times per session and each session lasted for 1.5 hours. In the initial months, there were 3 such sessions conducted with spiritual emotion on a daily basis, i.e., in the morning, afternoon and evening. In recent months, as of Sep 2016, only 1 session is being conducted per day.

Soon after the chanting began on 17-Sep-2015, within a couple of months i.e., in Nov 2015, it was observed that some plants began to sprout up all along the perimeter of the ashram courtyard. The maximum number of plants were seen just near the temple room where the chanting sessions were being conducted. Dr Ajay Joshi a resident veterinarian (who is also a seeker) identified the saplings as Ficus Racemosa locally known as Audumbar (Udumbara) or the Holy-Fig tree. According to Hindu culture, this tree is considered Holy and is closely related to the Dattatreya Deity (Ref: Shree Gurucharitra, Chapter 19). Thus, it is common to see the Audumbar tree near Dattatreya Deity temples. The plant is also known to have many natural healing properties (Ref: easyayurveda.com).

The flowers of the Audumbar tree are pollinated by certain wasps, which enter the fig to lay the eggs. Apart from stem cuttings, their main way of propagation is when birds eat the fruit of the Audumbar and the seeds are then dispersed through birds’ droppings. (Ref: gardentia.net)

2. Information on how the Audumbar plants grew

This is a picture of the courtyard just outside the Ashram temple room. It shows the difference between the number of saplings observed and how they have grown from the early stages in Nov 2015 to Nov 2016. 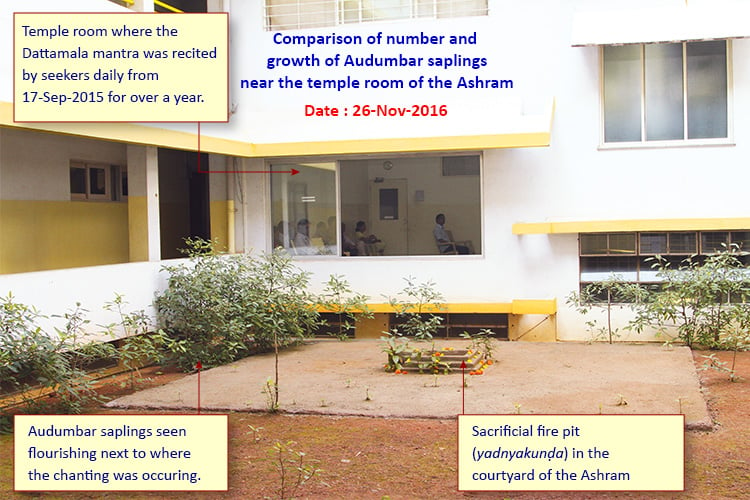 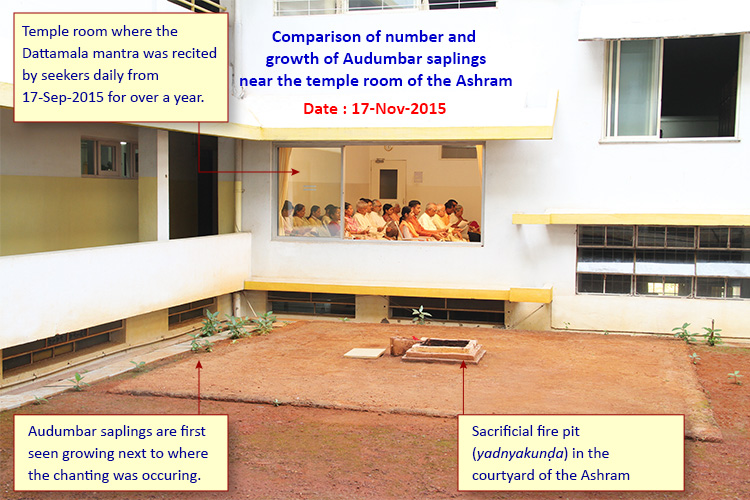 This is a picture of the Audumbar plants taken on 1 Nov 2016, during the Diwali festival. With the lamps lit on each of the balconies, it was a very sāttvik sight to behold. 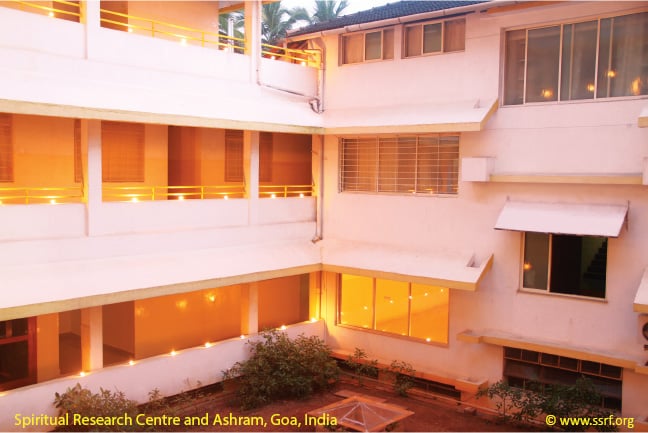 At first, it was observed that the plants only grew along the perimeter of the internal courtyard of the ashram. The maximum concentration of the plants was just outside the temple room wall at the corner of the courtyard where the recitation of the mantra was taking place. As time progressed, more Audumbar plants were seen sprouting up on the North and East area too. Yet for many months very few Audumbar plants were noticed on the south side of the courtyard. Then in September 2016, we saw a sudden spurt of Audumbar sapplings growing on the South side too.

In the chart below, we have documented this unusually high growth rate of the sāttvik plant (Audumbar) as they sprouted up all over the courtyard. 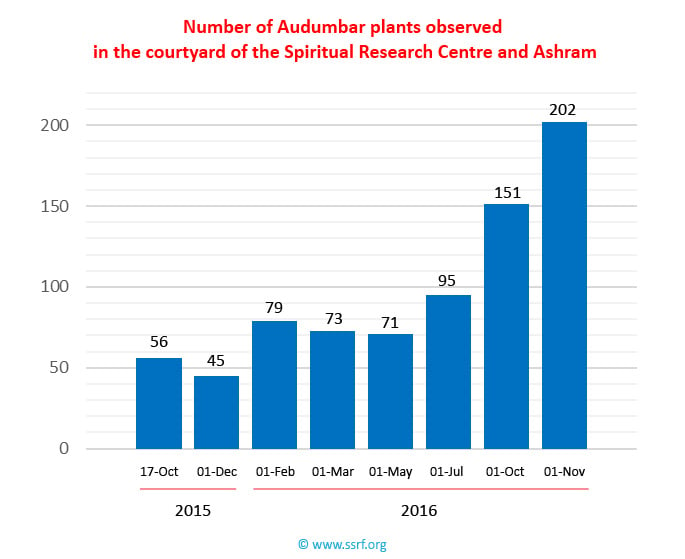 The numbers given above represent a cumulative total which includes old and new plants. A few plants died and hence we noticed an overall reduction in the number of plants in the months of Dec-2015, Mar-2016 and May-2016. Please note no special care was given to these plants and they just grew naturally. 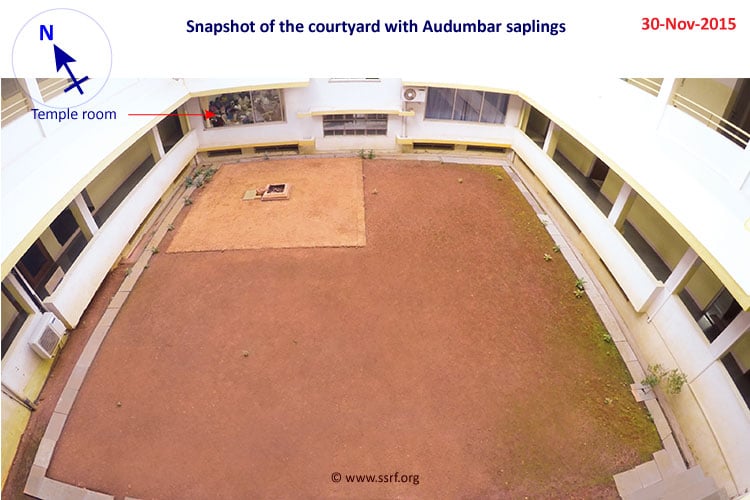 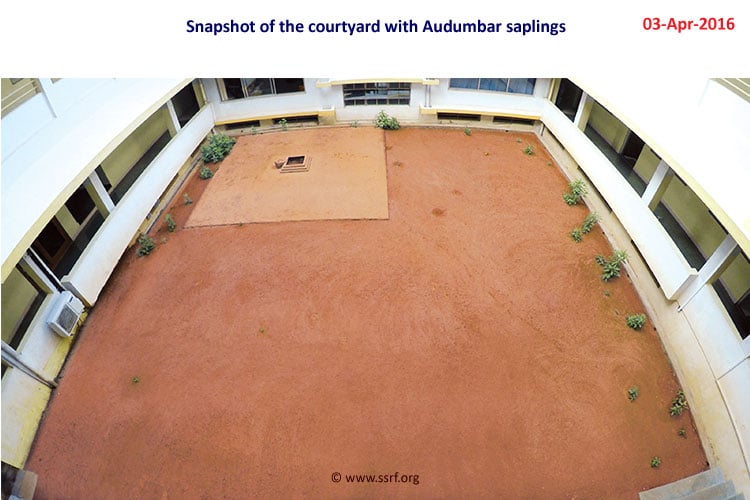 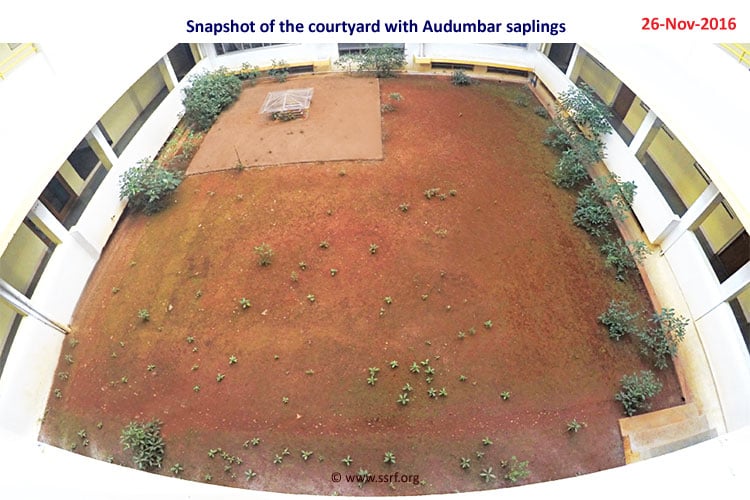 3. Observations and comments on the growth of the Audumbar plants 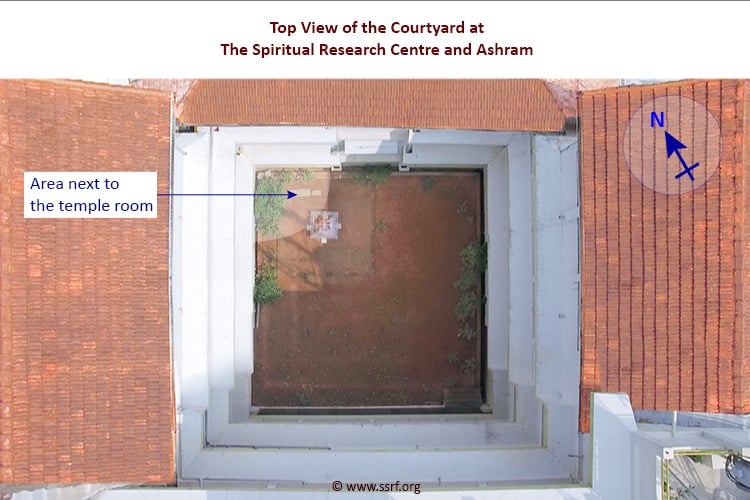 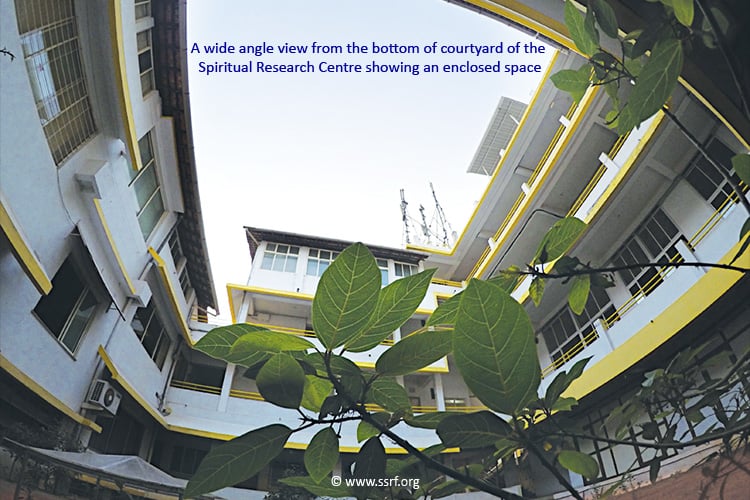 It is also pertinent to add that there are a few Audumbar plants / trees around the ashram. Two of them are at the entrance itself as shown in the aerial photo. None of them have been planted but have grown on their own. Some final thoughts on this unique phenomenon

The appearance and flourishing of these Audumbar plants have coincided with the chanting of the Dattamala mantra. It can be stated that the recitation of the Dattamala mantra is perhaps the only known difference before and after the observation of this unique phenomenon. Can the chanting of the Dattajapmala mantra in Sanskrit by seekers under the guidance of a higher-level Saint have the power to create such a phenomenon? Can such chanting activate the growth of Audumbar (Holy-fig) trees which are closely related to the Deity-principle of the mantra that is the Dattatreya Deity?

The interesting and intriguing fact is that only Audumbar plants have been seen to be growing in the Ashram courtyard during this period and no other type of plant. Given that there has been no active growing of these Audumbar saplings, it is quite remarkable as to how they have flourished. We request botanists and researchers in this field to help us analyse this phenomenon for scientific purposes. We also invite information from scholars well versed in Sanskrit literature and Holy texts as to whether they have any reference to other situations where mantras in Sanskrit have had such an extraordinary influence on any vegetation. The spiritual research team will analyse this phenomenon and we will be publishing our research soon.