Note: To understand the background behind this case study and why these phenomena have been taking place, especially with regard to SSRF please read, An introduction to horrifying supernatural phenomena.
SSRF publishes these case studies with the intention of providing some direction to our readers with regard to problems that manifest at a physical or psychological level, but which can have their root cause in the spiritual dimension. When the root cause of a problem is spiritual in nature we have observed that the inclusion of spiritual healing remedies generally gives the best results. SSRF advises continuation of conventional medical treatment along with spiritual healing remedies for the treatment of physical and psychiatric illnesses. Readers are advised to take up any spiritual healing remedy at their own discretion.

Miss Neha Dongrey, who is from Maharashtra, India, has been doing spiritual practice (sadhana) under the guidance of His Holiness Dr. Athavale since 1998. She was 14 at the time. She has been doing spiritual practice full-time since 2008. Over the years, she has taken on various responsibilities as her service unto the Absolute Truth (satsēvā). These include responsibilities related to the spread of Spirituality and administration. After graduating from school, Neha moved to the SSRF research centre and hermitage (ashram).

2. Experience of a Saint’s photograph disfiguring into a distressing image

Below are photos of the mobile handset with the distressing image that were submitted to SSRF’s research centre. 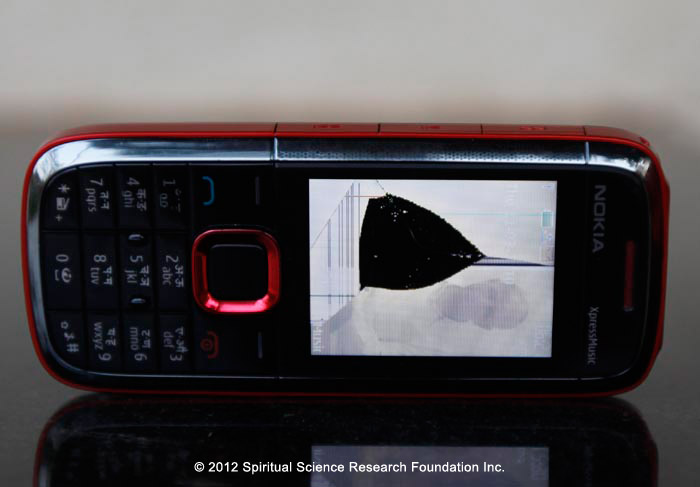 Neha's mobile with a black figure that appeared in place of a wallpaper image of H.H. Dr. Athavale. 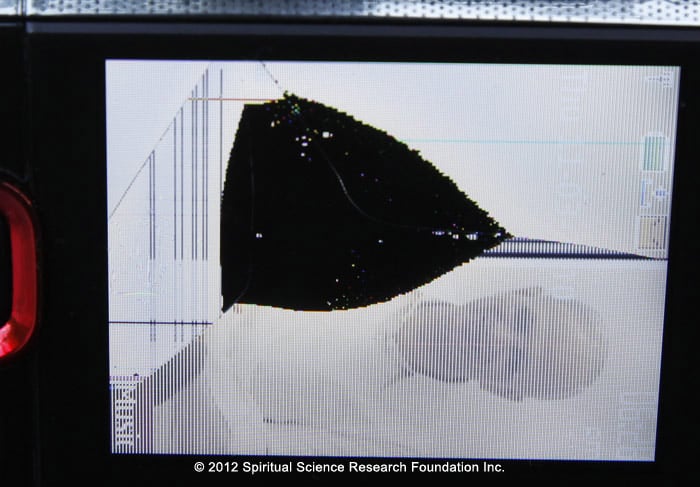 A close-up of the black figure which disfigured H.H. Dr. Athavale's image.

Neha recalls that on the day before the image appeared she experienced very bad feelings and her general state of mind was disturbed.

This distress continued after the distressing figure appeared on Neha’s phone and also increased in intensity.

In addition, Neha began to experience an unpleasant sensation that she described as similar to the experience of seeing drainage or something unclean. Neha found that she was still able to play devotional songs of Saints on the phone as well as receive phone calls.

She asked the seekers of SSRF’s subtle-knowledge department about the image and they confirmed that the distressing figure had appeared due to an attack by negative energies (ghosts, demons, devils etc.). She also received advice on spiritual solutions for reducing the effects of the attack. The measures she undertook included:

After applying these remedies for a few days, the image of H.H. Dr. Athavale disappeared and the screen turned completely white.

After a few days, the distressing figure remained, but its height reduced slightly, and it continued to decrease at this rate over time.

Eventually, the mobile’s wallpaper completely disappeared from the screen.

3. Explanation of the process of disfiguration

The explanation for the events that occurred in the case of Neha’s mobile phone are as follows.

H.H. Dr. Athavale is a Saint of the highest order hence His photograph emits a lot of Divine consciousness. The wallpaper image in the form of His photograph was related to the materialised (sagun) energy of God.

When the screen turned white, it signified a change in the Divine Energy (Shakti) that was being utilised in the subtle-battle. White signifies non-materialised (nirgun) energy. This Divine non-materialised energy, along with the other spiritual measures that were applied, slowly reduced the size of the distressing figure imposed by negative energies (ghosts, devils, demons etc.).

Disfiguration by negative energies (ghosts, demons, devils etc.)  is a process that is irreversible. Therefore, after the negative energy in the distressing figure was depleted, the mobile phone wallpaper eventually completely disappeared from the screen.