In order to understand this article we recommend you familiarise yourself with the following article:

In our earlier articles, we have introduced a number of unusual phenomena studied by SSRF since the year 2000 which were caused by attacks of higher level negative energies. We have also explained the reasons for such attacks and have published two galleries with photographic samples of some attacked items.

One fascinating occurrence we came across was the fading and disfiguration of printed photographs and pictures. We were initially inclined to believing that these changes were occurring as a natural process of fading. However the speed and the extent of the changes that happened year in year out quickly had us rule this out. With careful scrutiny and through systematic spiritual research we found that the viciousness of these transformations was no coincidence. We also noticed that disfiguration was most frequently happening on photographs of Saints.

In this article we are presenting examples of this phenomenon as well as the subtle-mechanism by which it occurs.

Let’s take a look at some examples of pictures and photos transformed through the subtle-process of disfiguration.

2.1 Examples of disfigured photographs of His Holiness Dr. Athavale 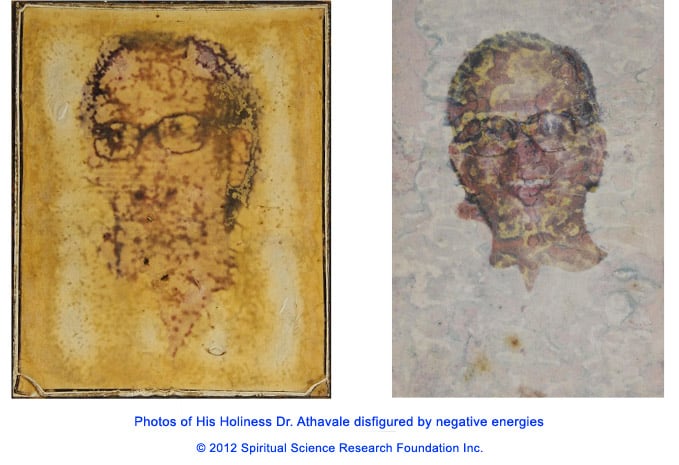 The above examples show how viciously the photographs of H.H. Dr. Athavale have been disfigured, almost to a point where the original image cannot be recognised. All these changes occurred in the photographs without any mechanical or physical intervention.

2.2 Example of disfiguration of an ancestor’s picture 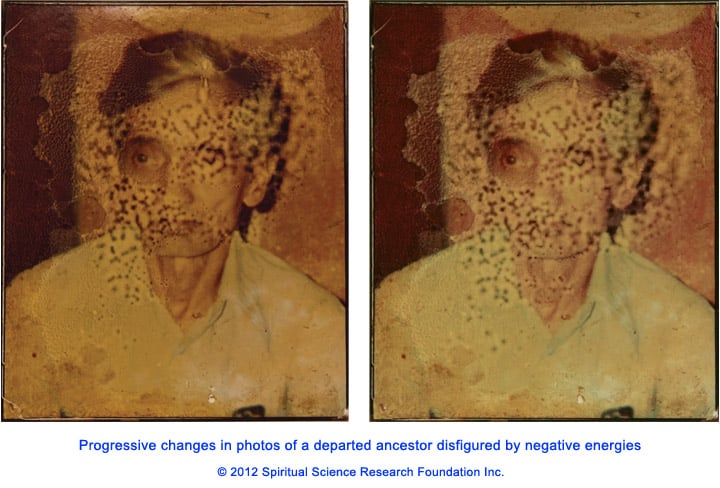 The left picture is of a seeker’s departed father. It was disfigured 15 days after a picture of Deity Datta was stuck on its back, due to manifestation of the ancestor’s distress. Deity Datta is that aspect of God that protects us from the distress of our unsatisfied departed ancestors. On the right is this same picture a year after it was brought to the SSRF research centre and ashram in Goa, India. The disfigurement in the photo increased, as the distress manifested further due to the Divine consciousness (Chaitanya) in the ashram.

We showed the pictures to Mrs. Anjali Gadgil, a seeker with advanced sixth sense. She studied them and found that disfiguration seen in the photos had a spiritual cause. She also explained that it happens through a specific mechanism at the spiritual level. Her findings were confirmed by H.H. Dr. Athavale.

3.1 Disfiguration due to attacks by higher level negative energies

3.2 Subtle-process of disfiguring and disintegrating the image on the photo

To understand the mechanism, as an example we have graphically presented a molecule of paper, that is cellulose, on which the photographs are printed.

Disfiguration has a very acute impact at a spiritual level, as it destroys the actual presence or existence of an object.

For example, in the case of attacks on the photos of H.H. Dr. Athavale, the intention of subtle-sorcerers is to destroy H.H. Dr. Athavale’s actual presence. However due to His spiritual strength they are unable to do so, and so they resort to attacking His photograph. In this way the subtle-sorcerers deprive society of the Divine consciousness which is present even in the photograph.

Apart from this, due to the distressing energy in the form of Absolute Air Principle, the entire gross body (sthūladēha) of the affected individual along with all its sheaths can be laden with distressing energy in very little time. That is why distress such as a sudden reduction in Vital energy (Prāṇa-shakti) resulting in a near-death state can be experienced. [H.H. Dr. Athavale has in reality been suffering from a severe reduction in vital energy for several years.]

4. Subtle-analysis of a disfigured photograph

We also analysed a photograph of the feet of His Holiness Bhaktaraj Maharaj, a Saint of the highest order, that was disfigured by negative energies.

The original photograph is of 14 cm in width and 10 cm in height. There was no effect of the disfiguration on the lamination of the photograph. 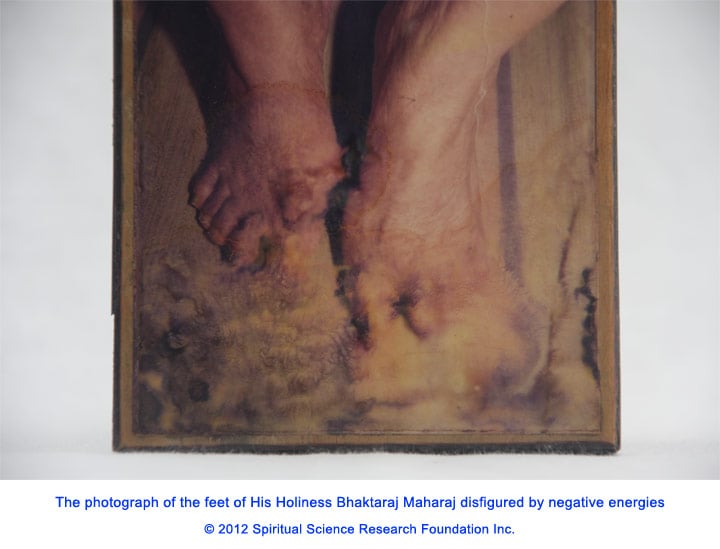 As one can see, the toe of the right foot up to its root is destroyed as if it has been eaten up, the toe of the left foot and the adjoining finger have been disfigured in some proportion and the other fingers are completely disfigured. Knots like those found on trees appear on the Holy feet and on their sides.

The following drawing based on subtle-knowledge has been drawn by Mrs. Yoya Vallee, a seeker of SSRF, using advanced sixth sense.

This drawing based on subtle-knowledge shows what she perceived happened in the spiritual dimension when the negative energy that attacked the photograph of the feet of H.H. Bhaktaraj Maharaj. 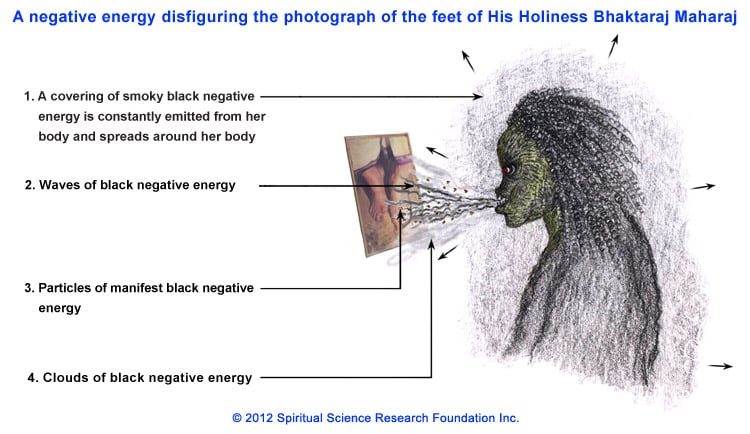 Due to the waves of Divine consciousness being transmitted from the Holy feet of the Saint in the direction of Hell, many centres emanating distressing energy from Hell in the ground are destroyed. This reduces the power of distressing waves emitted through the medium of seekers’ feet into their body. In order to curb this, negative energies tried to attack the photograph of H.H. Bhaktaraj Maharaj’s feet by assuming an illusory form.

The photograph was attacked by a female goblin (haḍal) from the 4th region of Hell.

5. In summary – spiritual practice protects us from negative energies

The likelihood of an attack by higher level negative energies on the average person through the subtle-process of disfiguration is negligible.

However, in today’s times all of us are affected by negative energies in many other ways, or are likely to experience their effect in the near future. The best spiritual remedy to protect oneself is to undertake regular spiritual practice according to the six basic principles of Spirituality.