Note: To understand the background behind this article and why these phenomena have been taking place, especially with regard to SSRF, please read – An introduction to Horrifying Supernatural Phenomena. 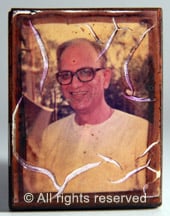 Most of us have pictures of our friends, family and loved ones decorating our homes and places of work. Many seekers also have pictures of their favourite Deities and Saints placed in an altar room, or in a place where they can worship or be reminded of God and the Guru. It is quite normal that over the course of time, the pictures as well as the frames and glass show wear and tear, occasionally cracking and fading.

But what if one day, we were to come home and find that the picture of our favourite Saint or Deity had cracked quite suddenly, dramatically, and without any obvious external influence? SSRF has observed this very phenomenon, namely, that of cracks occurring spontaneously. This has repeatedly happened to a number of items, without any external factors such as photos being dropped, spills, or exposure to heat or light. These cracks occurred in photos of Saints and Deities, as well as other objects such as those used for worship, spiritual practice, spiritual healing, jewellery, and even everyday objects.

We did spiritual research into this phenomenon and found that negative energies have the ability to create cracks in inanimate objects.  In this article, we present some of our findings as to how and why it takes place.

3. How to distinguish cracks made by negative energies from human-made or naturally occurring cracks

It is possible to differentiate cracks made by negative energies from human-made cracks, or cracks caused by regular wear and tear, based on a number of factors such as:

Many times the cracks are also accompanied by other changes in the objects, such as discolouration of photographs, spots, streaks and foul smell. These changes can mostly be perceived through a reading using advanced sixth sense.

Why are cracks a preferable form of transmitting negative energy?

As with similar attacks on an inanimate object through holes or tears, cracks too are a preferred form of attack due to the obstruction they create in the positive spiritual energy flowing through the object. The crack acts as a leak for this positive energy and furthermore, as a storehouse of negative black energy.

The effect of cracks

When one is affected through cracks created by negative energies, distress is likely to occur at any or all of the following levels. Some examples of distress:

5. Subtle analysis of a photograph that developed cracks

As part of SSRF’s spiritual research, we have done a subtle analysis of a number of objects that have developed cracks. The subtle analysis is done by seekers with advanced sixth sense, who have the ability to perceive the spiritual dimension with accuracy. This happens through the subtle sense of vision or by receiving Divine Knowledge in the form of thoughts, percentages, etc.

In the picture below, we see a photograph of a Saint (His Holiness Bhaktaraj Maharaj) that had been badly affected through the medium of cracks. 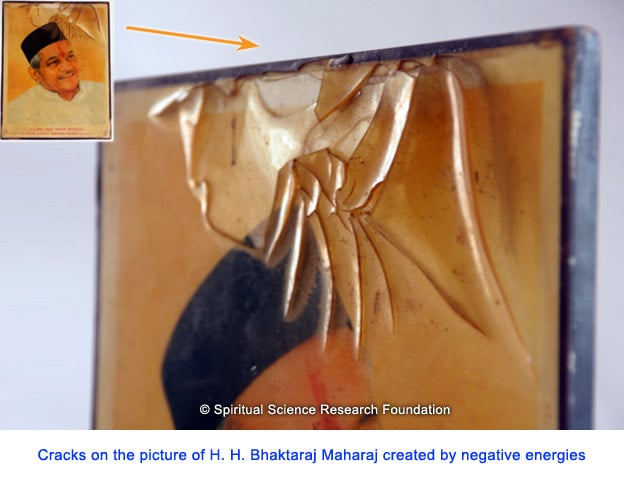 After SSRF’s seekers analysed the picture with advanced sixth sense, they came to know that the reason for the cracks was an attack by a servant demon (Rākshas) from the 3rd region of Hell who was obeying the orders of a higher level mantrik. The aim behind his attack was to create obstructions in the speed of the Divine Energy emitting from the photo.

This is what Mrs. Yoya Vallee, who has an advanced sixth sense of vision, saw in the subtle: 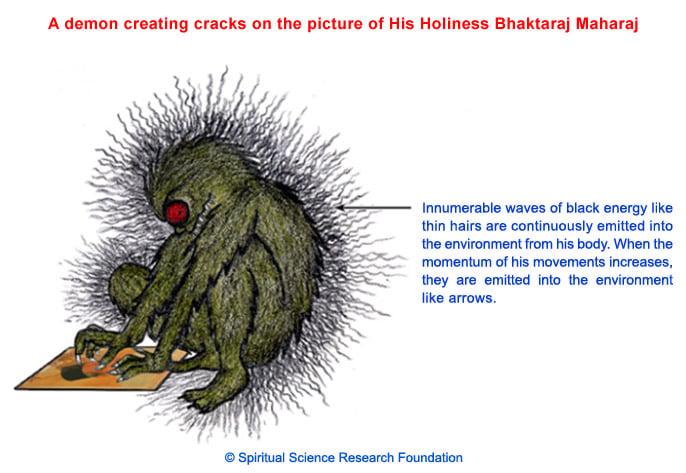 Read a more detailed description of the attacking demon.

Subtle reading of the distressing energy that attacked the photograph of H.H. Bhaktaraj Maharaj through cracks

1A. ‘Truthfulness of subtle-picture : 80 percent

1E. Proportion of black energy : While attacking the photograph of H.H. Bhaktaraj Maharaj in 2006, his black energy was 30 percent. Now in 2010, it has become 20 percent.

1F. Hell region number of the sorcerer getting the action done : 4

1 G 1 C. Skin : Rough; but when he gets angry, it becomes spiky and black energy is transmitted from it in to the environment.

1 G 1 K. His body is elastic. So his actions like sitting, standing, walking, jumping are like a monkey. He can run and jump fast.

1 H. Process of mutilating the picture through the subtle : Under instructions from a sorcerer from the fourth region of Hell, this demon mutilated the photograph of H.H. Bhaktaraj Maharaj. He came running and hopping like a monkey. He made cracks to the front portion of the photograph with his spiky and thick nails. The black energy being transmitted from his body spread in the environment. So a stinking smell spread everywhere.

According to Divine Knowledge received by Mrs. Anjali Gadgil, the negative entity behind the attack had sent a lot of subtle black machines (yantras) towards the photograph from the dark recesses of the Hell region. He gave speed to the machines with the help of supernatural powers and the Absolute Earth element by using black smoke, and sent the machines in the upward direction. Hence the photograph experienced tremors like earthquakes, developed cracks and the lamination came off from the photo. Black smoke was emitted from the black covering around the photograph and thus the onlookers could experience a burning sensation in the eyes, and the atmosphere became smoky and stuffy.

The attacking mantrik was also affected through this attack – his outer protective shield was broken and black smoke was emitted from it. While attacking the photograph of H.H. Bhaktaraj Maharaj in 2006, the negative entity’s energy was 30%. Now in 2010, it has come down to 20%.

Below are links to more case studies and real-life accounts of cracks created by negative energies on various objects.

7. How to protect oneself from the adverse effects of cracks created by negative energies