This case study is a real-life account of two seekers who witnessed many coconuts cracking over and over again, before their eyes, during a spiritual function, as they and other seekers present looked on in disbelief. 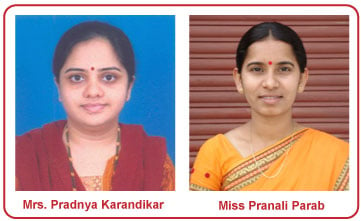 Miss Pranali Parab and Mrs. Pradnya Karandikar from Mumbai, India practice spirituality under the guidance of His Holiness Dr. Jayant Athavale and devote their spare time toward organising various spiritual events. In February 2009, as part of their satseva (service to God), the two of them were welcoming guests to an important spiritual function. The function was organised on an open ground in the town of Panvel (near Mumbai) and thousands of people were expected to attend. Below is an account of the unusual events that unfolded before their eyes.

“On that day, we were assigned the seva of welcoming guests to the function. Apart from attending to guests, the welcome committee was also responsible for serving the speakers and Saints attending the function. We were also to ensure that they were honoured as per the usual practice of offering a coconut.

Spiritual research team’s note: Over the course of many years of spiritual research at SSRF, we have studied and witnessed the special properties that coconuts display in spiritual healing. Apart from that, the coconut is also a fruit that bestows most sattvikta. Thus coconuts are often gifted to Saints and special dignitaries at spiritual functions.

We started the satseva at 4.45 pm which was 45 minutes before the function was to begin.

While preparing the stage, seekers experienced constant pressure on eyes and there was a great deal of restlessness. We observed that when we went away from the stage, the pressure would reduce and would resume on coming closer to the stage. Nevertheless, we continued with our seva.

As per the sequence of greeting the revered speakers and Saints, we had prepared shawls, garlands and Holy texts that were to be gifted to each of them. All these were arranged on separate platters. We had kept the items for H.H. Parshram Pande Maharaj and other attending Saints on one table. On another table we had arranged gifts for the priests that were to recite vedic mantras at the commencement of the function.

We then carefully placed a coconut on top of the items on each platter. We had been vigilant when buying them and had checked that they were not cracked. That afternoon we had also handled them carefully and inspected them before placing them on the platters. All the coconuts were completely intact.

However 10-15 minutes later we noticed that the coconuts set aside for the Saints had cracked. We replaced them. To our amazement, in a short while these too developed cracks. We asked a seeker to go and get fresh coconuts. When he returned we saw that the three new coconuts brought by him had cracked immediately and one of them had a deep black stain on it, as though it had been burnt. All in all we had to change coconuts for the Saints, thrice.

A coconut set aside for the priests also cracked, dripped coconut water and stained the shawl beneath it.”

(Given below are pictures showing what a cracked coconut looks like.) 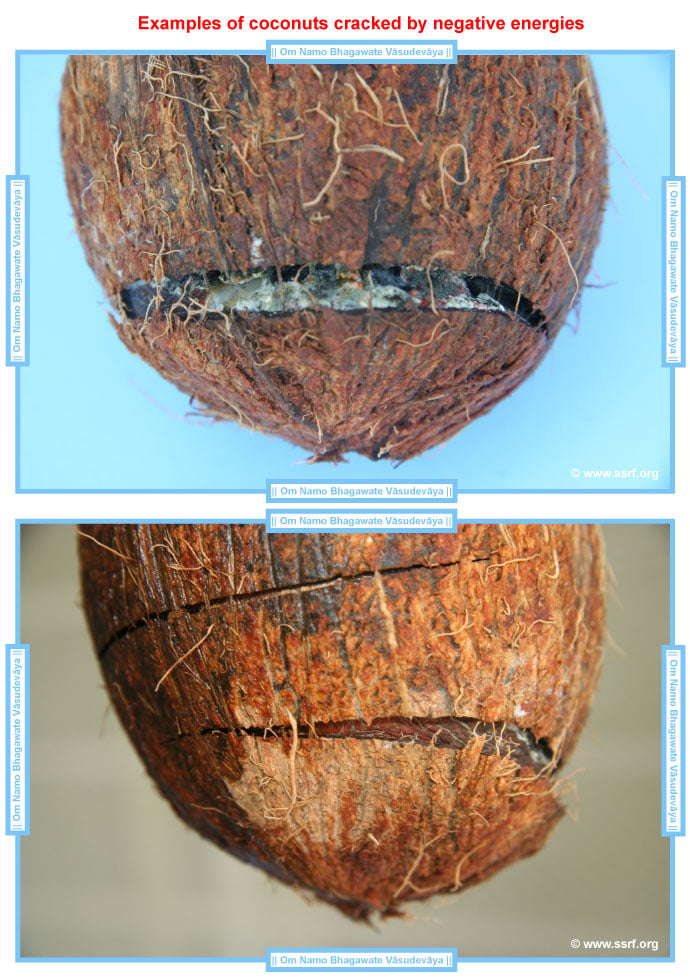 Mrs. Karandikar and Miss Parab further said, “We had witnessed this occurrence of coconuts cracking spontaneously at several spiritual functions before that, so we were already aware that this can occur; not due to cold or scorching heat, but due to a negative energy attack. After consulting with several seekers who have advanced sixth sense about the coconuts at Panvel cracking over and over, they confirmed that it was a severe attack. Indeed it was the first time we observed coconuts cracking so speedily one after the other.

All the seekers came together and prayed collectively for the removal of distress and creation of a protective sheath all around the venue. As a further precaution, we also collectively blew Holy ash and sprinkled water mixed with cow’s urine on the coconuts.”