Note: To understand the background behind this case study and why these phenomena have been taking place, especially with regard to SSRF, please read – An introduction to Horrifying Supernatural Phenomena and What is the spiritual science behind cracks created by negative energies?

In this case study, we describe how a photograph of a higher-level Saint, H.H. Dr. Athavale, became cracked and deformed. While photos can develop cracks over time, in this instance, the picture of H.H. Dr. Athavale not only developed cracks with no external physical cause, but also showed signs of rapid fading quite spontaneously. This warranted further investigation, as the damage was quite unusual. In this article we also explain what a subtle-examination of the cracked photograph revealed.

This item is part of a whole collection of items preserved at SSRF’s Spiritual Research Centre. The items have been collected over the past many years and display a smorgasbord of spiritual phenomena, which have been studied and documented. For more details please see our article on preserving knowledge about the spiritual dimension and learn how you can contribute to this unique task that will benefit future generations.

2. Details of the cracks on H.H. Dr. Jayant Athavale’s photograph

In the slideshow below we have given a comparison between a photograph of H.H. Dr. Athavale that has not been affected by negative energies, and the affected one that we are studying through this article. 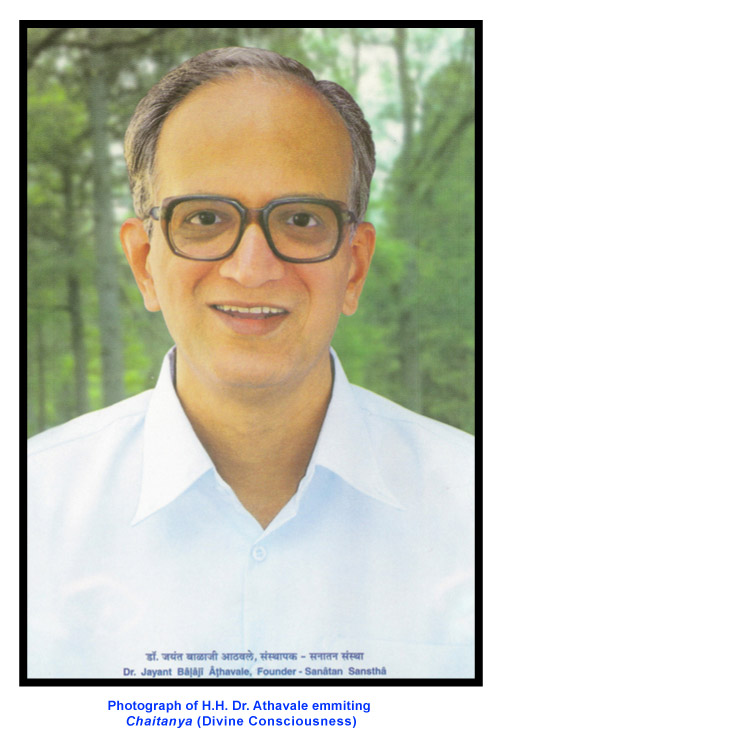 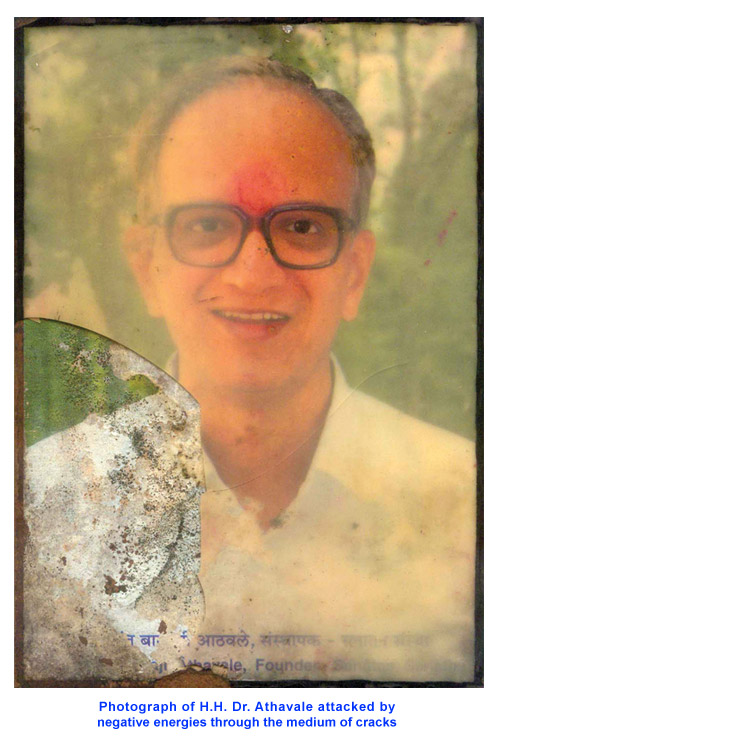 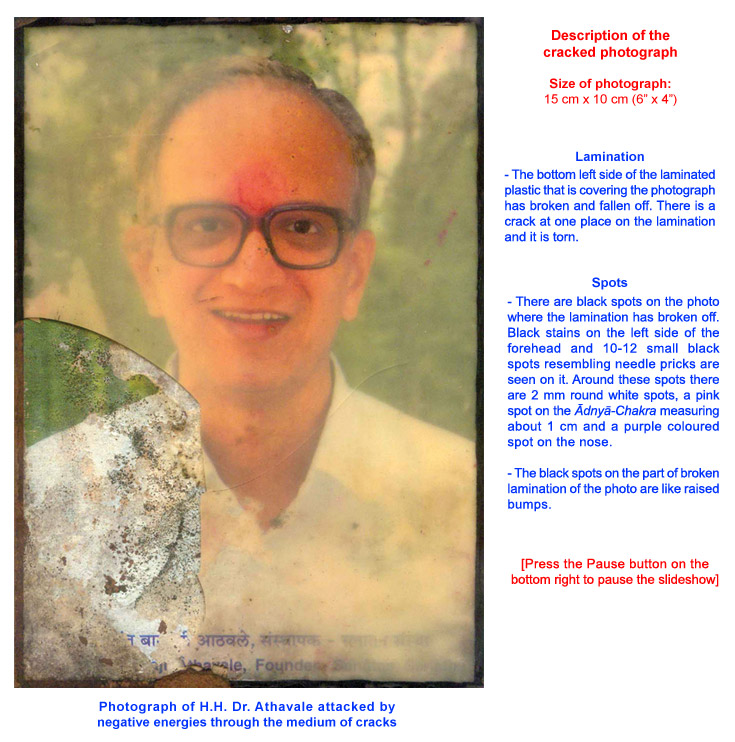 3. Subtle analysis of the cracks

A subtle-reading was taken of the affected photo was taken by Mrs. Yoya Vallee, a seeker from SSRF’s subtle-department. The validity of her reading was checked, and it was found to be 80% accurate, meaning that it was highly accurate.

Yoya observed that the negative energy behind the attack was a demon under the control and guidance of a subtle-sorcerer (māntrik) from the 5th region of Hell (Pātāl). The following is a drawing based on subtle-knowledge of what she saw. 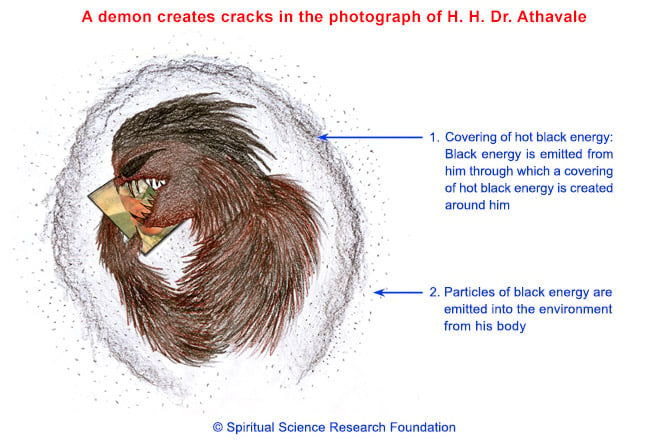 On the instructions of a subtle-sorcerer from the 5th region of Hell, the demon chewed the photograph of H.H. Dr. Athavale with his sharp teeth and tore it to pieces with his hands.

Read a more detailed description about the attacking negative entity.

3. Process of mutilating the photograph through the subtle: On instructions from a sorcerer from the fifth region of Hell, the demon chewed the photograph of H.H. Dr. Jayant Athavale with his sharp teeth and tore it to pieces with his hands

3.2 Aim and mechanism of the attack

As per the Divine Knowledge received by Mrs. Anjali Gadgil, the aim of the attack was to prevent society from receiving the benefit of the bright Divine consciousness (Chaitanya) that emits from the mid-brow chakra (Ādnyā-chakra) of H.H. Dr. Athavale in the photograph, and to make the environment impure.

By placing subtle-bones, skulls and negative subtle-diagrams (yantras), the attacking entity succeeded in emitting black energy at a fast speed that ultimately cracked the lamination on H.H. Dr. Athavale’s photograph. This also enabled it to cause distress to others by creating an area filled with distressing frequencies around the photograph. The total effectiveness of the attacking entity’s black energy was 20%.

As the destroyer (mārak) vibrations from the source of Divine consciousness in the photo and the black striking frequencies of the subtle-sorcerer created through the repetition of mantras collided, an intense heat wave developed. This destroyed the protective sheath around the subtle-sorcerer.

4. Effect of the attack

The following diagram shows the effect of the attack on the photograph at three different levels.

Borders containing Shrī Krushṇa’s principle have been drawn around the article so that readers do not feel distressed while looking at the photograph, the drawing based on subtle-knowledge or reading the information given above.

The explanation of the protective mechanism received from the border is as follows. The golden particles emitted from the border of Shri Krushna’s Name segregate the black striking rays emitted by the subtle-sorcerer and then destroy them. Thus the effect of the distressing vibrations emitted by the drawing based on subtle-knowledge into the environment is destroyed. The pressure created by the striking frequencies in the atmosphere decreases and lightness is felt.

While attacking H.H. Dr. Athavale’s photograph in 2006, the demon had 25% black energy. Due to the energy spent in the attack as well as the Divine consciousness being emitted from the photograph, by now his energy should have reduced to 8-10%. However, because the demon was carrying out the attack in service to a subtle-sorcerer from the 5th region of Hell, the demon got black energy from the subtle-sorcerer. Consequently as of January 2010, the demon’s energy was 20%. However, his energy will continue to reduce. This is especially so given the current battle of good versus evil.

Due to the Divine mission for the sake of society (samashṭi) and the collective spiritual upliftment carried out by Saints like H.H. Dr. Athavale, negative energies feel threatened. The subtle-battle that occurs as a result of their subsequent attacks on Saints is part of the battle of good versus evil. Once we align ourselves with the mission and guidance of Saints, we will be protected from the effect of these attacks.