Spontaneous holes in clothes due to ghosts, demons, devils, and negative energies

Note: To understand the background behind this case study and why these phenomena have been taking place especially to SSRF please read – An introduction to Horrifying Supernatural Phenomena.

This is a case study about spontaneous holes occurring in clothes as a result of an attack by ghosts (demons, devils, negative energies, etc.). It was experienced by Mr. Prithviraj Hazare, a seeker who is doing spiritual practice under the guidance of His Holiness Dr. Athavale. The following is the sequence of events that happened to him in July 2003.

I  bought a pair of striped pyjamas during a trip to Mumbai, India. About a week later, when I was back in Goa, India, I wore the pyjamas for the first time while sleeping. When I got up in the morning, I was quite shocked to see that there was a large gaping hole in the pyjama bottoms. On examining the hole further (which was about 4-5 cm in diameter), I noticed that the edges of the hole became powder in my hand. When looking for any pieces or signs of the material around, I found none. There was not a trace of any fragments of material on the bed. I found this really strange and the 6-7 seekers I was sharing the accommodation with looked at the hole in disbelief too. There was just no rational cause for it that we could think of. 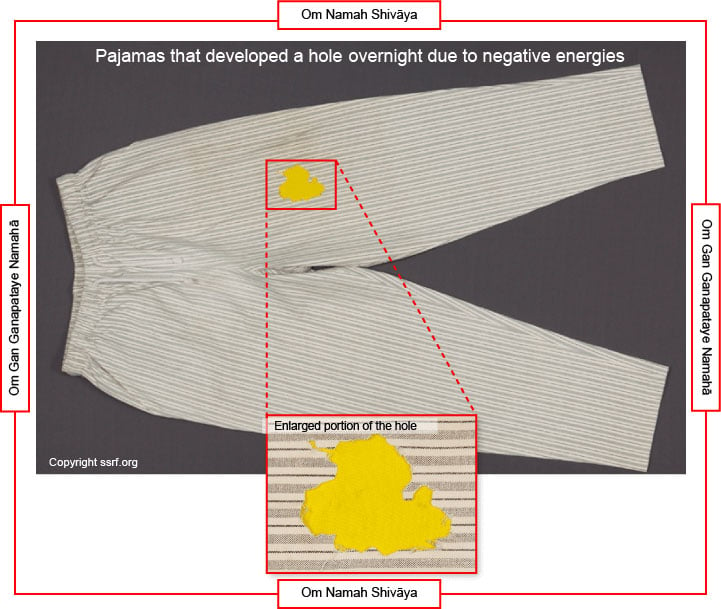 When I showed it to the subtle department at SSRF, they did a subtle reading on it and confirmed that it was due to negative energies.

In 2010 when a subtle reading of the pyjama was taken again, it was found that the distressing vibrations emanating from the hole created in the pant had increased. This was due to two reasons: