In its study of the spiritual dimension, SSRF has come across the unusual phenomenon of holes appearing in non-living objects without any external influence. This has been mainly on items of seekers or premises associated with SSRF. After studying a number of such cases through spiritual research, it was found that these particular holes were created by negative energies in order to attack someone and to spread black energy in the environment. Black energy is a spiritual energy which is the primary weapon of ghosts (demons, devils, negative energies, etc.).

[More information about subtle-sorcerers and other types of negative energies is available in our section on Ghosts.]

2. How to distinguish holes made by negative energies from man-made holes

It is possible to differentiate holes made by negative energies from man-made holes or holes caused by regular wear and tear, based on a number of factors, such as:

1. No external influence: Holes appear despite the fact that the object was stored safely and no external physical object or pest has caused the changes

2. Speed of occurrence: A key feature in the case of negative energies creating holes is the speed or suddenness of the holes occurring without any external stimuli

3. Changes in the holes: Holes changing shape or size over time

4. Mechanism of creating the hole: In some cases the mechanism of creating a hole by negative energies is by pouring subtle-acid which burns right through material such as fabric. However this can only be perceived through an advanced sixth sense reading.

In the following slideshow we present a few examples of the various types of holes created by negative energies.

4. Why do negative energies create holes?

Any type of attack by negative energies forms a subtle layer of black energy, which continues to pollute the environment, object or person at a spiritual level for extended periods of time. Through this action negative energies try to achieve one or more of the following:

These kinds of attacks by negative energies are very unique and are directed to those who are doing spiritual practice for the benefit of society at large and are contributing towards making the world a Divine Kingdom. In very rare cases, higher level negative energies may attack the average person out of mischief, with the intention of frightening him or her. The likelihood of this happening is 0.00001%.

Although there is only a slight chance of this phenomenon occurring to the common man, it is worth knowing about. This is similar to the principle behind our curiosity about the texture of the Moon or Mars, although most of us never actually go there.

5. What is the special effect of holes in transmitting negative energy?

Any object such as clothing or a photograph receives a corresponding flow of energy. The amount and type of energy flowing through the object generally depends on the spiritual state of the person who uses it. When a person is of a higher spiritual level, their items mostly both receive and emit a positive flow of spiritual energy. By creating a hole in it, negative energies obstruct this flow. This hole acts as a leak and as a result, the item cannot retain the positive energy. Negative energies then use these same holes to store black energy and give further distress to the person the item is associated with and the people using it.

Compared to any other type of attack by negative energies, the creation of holes requires the maximum amount of subtle negative energy. Also once a hole is created, it is very difficult to repair it. For example the threads of a cloth, once broken, cannot be pieced together as before. That is why, despite the effort required, negative energies choose holes as a medium of attack.

6. Types of distress caused by attacks of negative energies through holes

When one is affected through holes created by negative energies, distress may occur at any or all of the following levels:

7. How long does the effect of holes last?

The effect of holes created by negative energies on an object can remain forever, but the length of the effect will mostly depend on the strength of the subtle-sorcerer creating it. In some cases one can take spiritual measures to reduce or nullify the effect of the hole. In other cases, any further use of the object may cause high distress due to which further use of the object is not recommended.

8. Effect of the making of holes on the negative energy

Negative energies are also adversely affected when they create holes or make similar changes to objects, especially those related to higher level Saints that are working for the re-establishment of Righteousness. This was the case with the negative energy which attacked a photograph of His Holiness Dr. Athavale (shown below).

Mrs. Yoya Vallee, a seeker with advanced sixth sense, drew the below drawing based on subtle-knowledge which gives details about the attacking subtle-entity. 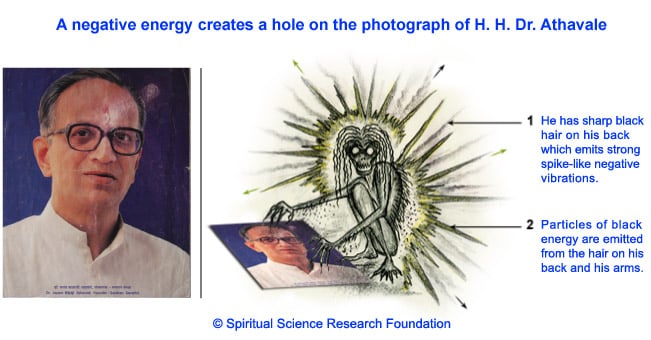 The negative energy in the drawing based on subtle-knowledge is about 20–25 cm long. He has sharp nails which can hold anything and scratch anywhere. He emits negativity up to 3-4 feet or more. He can also assume various other illusionary forms. He scratched the picture with great force and anger, thus spreading black energy onto the picture.

One may wonder why negative energies continue attacks on Saints and seekers through holes despite the adverse effect on them? This is because their desire to obstruct the spiritual progress of mankind that occurs through Saints is very high, and they keep trying their best. Due to high ego, they also use this situation to display their spiritual powers. From this one can see the detrimental effect of ego.

9. How to protect oneself from the adverse effects of holes created by negative energies

The best and most sustainable protection against such attacks by negative energies is an increase in spiritual practice according to the six basic principles of spirituality.

There are some specific spiritual measures one can take, such as applying Holy ash (Vibhūti), purifying the object by lighting incense sticks, or spiritual healing undertaken by a higher level Saint. However the benefit one derives from these measures will depend on the spiritual emotion (bhāv) and the spiritual level of the person, the strength of the attack and other factors.

10. Experiences related to the effect of holes created by negative energies

From this example we were able to study the subtle battle which occurs between holes created by negative energies, and the spiritual positivity emanating from the affected object (a photograph of H.H. Dr. Athavale).

This case study describes the effect of holes which appeared spontaneously in the wooden flooring of a seeker’s home.

Case study of a hole appearing in a pyjama as a person sleeps.