Religious art, sacred paintings, and symbols are used for worship across all cultures. Such spiritual artwork is intended to kindle devotion, augment faith and foster the remembrance of God in devotees. Devotees from all faiths carry these sacred artforms with them for their spiritual protection. However, for artworks to fulfill these spiritual purposes, at the very least they would need to emit positive vibrations. When looking at different art forms (religious art included), we are often drawn to them by their aesthetic value or by what looks appealing. Religious artwork is rarely evaluated based on whether it emits positivity, which in fact should be the main criterion.

More often than not when we go to procure religious artwork or when gifting religious artwork or spiritual memorabilia passed down in a family for generations, we just go by the artwork’s aesthetic value or the sentimental value associated with it. Not much thought is given to the level of spiritual positivity being emitted from it.

On the other hand, do artists who engage in spiritual or religious art consider as to whether their artwork is spiritually positive? The onus lies on artists to bring out the spiritual energy in the art form.

In relation to spiritual art, India is home to the largest amount of people who believe in God (Census of India 2011 published in Hindustan times) and consequently, religious art such as deity’s (a deity is an aspect of God) pictures are very popular and can be found all over the country. One of the superior deities who is worshipped the most before every ritual and spiritual ceremony is Deity Ganapati. His Name is invoked before every ritual because He is the aspect of God who removes all spiritual obstacles from the 10 directions so that Divine energies can grace the venue and people can derive true spiritual benefit. Deity Ganapati also represents Knowledge as He is the aspect of God who is the master of all the 14 Vidyas (Knowledge). 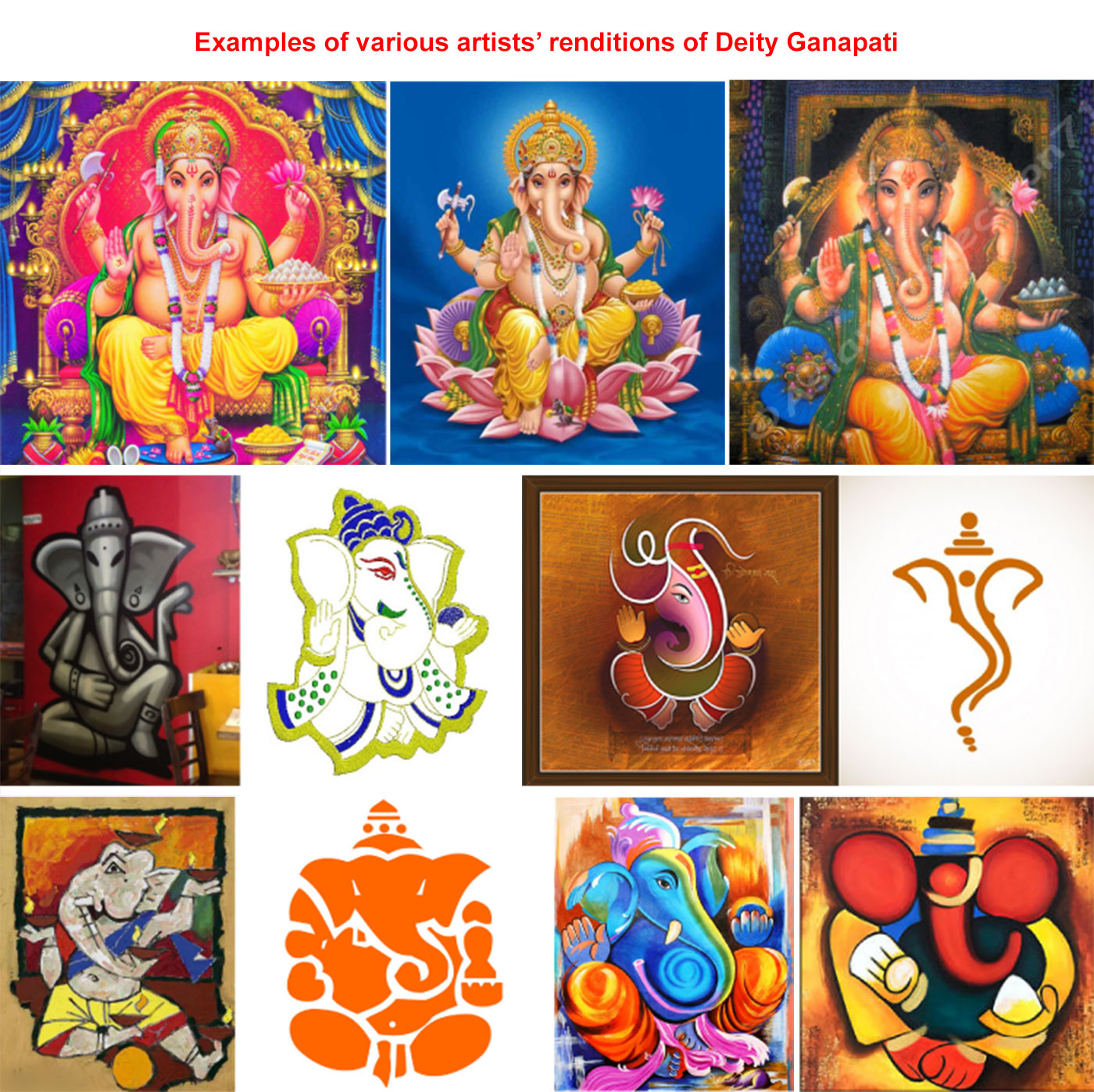 While a few of the paintings shown above are genuine attempts by artists to paint Deity Ganapati, there are many others which have distorted His form. When there is such distortion in a picture, it amounts to denigration of the Deity. At a vibrational level, a distorted picture emits spiritually impure vibrations. Therefore, such artwork does not fulfill the spiritual purpose of a religious picture, which is to attract the Deity Principle of Ganapati from the Universe to grace the place of worship and to provide spiritual positivity and protection. On the contrary, such artworks emit negative vibrations. Ideally, at a place of worship, a picture which evokes devotion in the viewer and attracts the maximum amount of Deity Principle should be placed. Thus, there is a greater need for religious pictures or symbols, which emit spiritually positive vibrations.

So, with this pure intent in mind and to fulfill that need of sattvik (spiritually purer) artwork, the arts section in the spiritual research team started the process of making pictures of Deities that emit a high amount of spiritually pure vibrations.

The epitome of spiritually pure art is when one is able to accurately draw the picture of a superior deity since it emits the maximum amount of positivity. To be able to bring the exact form of the deity in a visual art form takes years of sincere spiritual practice and the constant guidance of an evolved spiritual guide of the highest order. At the Maharshi Adhyatma Vishwavidyalaya (MAV) seeker-artists doing spiritual practice under the guidance of H.H. Dr. Athavale started making spiritually pure pictures of Deities in 2000. Through this process, many subtle-experiments were performed by the seekers-artists at each stage to determine if the pictures were emitting spiritual positivity. Due to the spiritual practice performed by seeker-artists and the resolve of H.H. Dr. Athavale (Saint of the highest order), each subsequent attempt at painting deity pictures started attracting and emitting more of the Deity Principle.

Seeker-artists at MAV have made accurate drawings by hand and in the form of digital paintings of superior deities and they have been found to emit a high degree of spiritual positivity. Moreover, seekers who have kept or worshipped these pictures have had numerous spiritual experiences due to the positivity emitting from them and have spiritually benefitted from them.

One case study is given below regarding how a digital painting of Deity Ganapati was made at MAV by seeker-artist Mrs. Janhavi Shinde. This case study is given as an inspiration and learning to artists who want to grow spiritually and experience God through their art form.

4. An example of sattvik art – the evolution of a sattvik digital painting of Deity Ganapati

Between 2000 to 2012, seeker-artist Mrs. Janhavi Shinde started the project of drawing a sattvik digital painting of Deity Ganapati using software on a computer. She undertook this project as her spiritual practice, under the guidance of H.H. Dr. Athavale (her spiritual guide). The reason she undertook this project was because the best commercially available pictures of Deity Ganapati had less sattvikta and were able to attract and emit only 2-3% of the Deity Principle. This percentage was obtained by taking a reading through sixth sense by the spiritual research team. Through spiritual research, it was also understood that in the current era of Kaliyug, the maximum percentage of the Deity Principle that can be attracted to or emitted from any work of art is 30% or slightly higher.

The first digital painting that seeker-artist Janhavi completed was able to attract 4% of the Deity Ganapati Principle, which was a slight improvement when compared with the commercially available ones. Over a 12-year period, due to her sincere efforts in practicing Spirituality, her subtle-ability grew, and she was able to improve upon the original picture under the guidance of her spiritual guide. Over the years, she completed a total of 6 digital paintings and with every subsequent painting, there was an increase in its accuracy. The 6 digital paintings of Deity Ganapati and their ability to absorb and emit the Deity Ganapati Principle are provided below in percentages (%).

Please note : In this paper, the term ‘digital paintings’ has been also referred to as ‘pictures’. 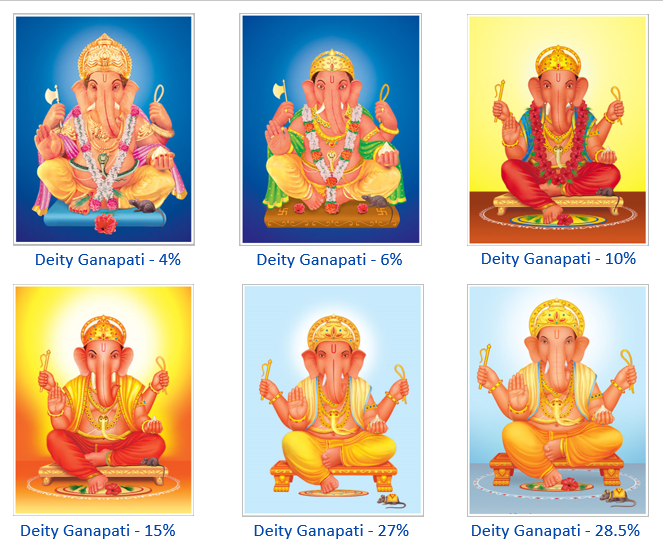 Please note: The spiritual research team assessed the level of accuracy of each picture (given above) through the medium of an advanced level of sixth sense of seekers in the research team. This project achieved a spiritual milestone in the history of art as for the very first time in the current Era, a picture of Deity Ganapati was able to attract this high a percentage (28.5%) of the Deity Ganapati Principle.

The spiritual research team was interested in measuring the spiritual purity of each of the above digital paintings of Deity Ganapati with aura and subtle-energy scanners to see if the readings matched with the readings obtained through sixth sense. An experiment investigating this is given below.

The spiritual research team wanted to ascertain whether aura and subtle-energy scanners could also detect the difference in the positivity between the 6 digital paintings.

For this experiment, Polycontrast Interference Photography (PIP) was used. PIP is an energy field video imaging process. This technology reveals patterns of light that are not visible to the naked eye and are displayed on a computer monitor in the form of colours. Positive and negative vibrations in the environment are denoted by certain colours that have been calibrated into the machine. Positive colours denote spiritual vibrations that have sattvikta, while negative colours denote Raja-Tama predominant vibrations or spiritual impurity.

Below are the corresponding PIP pictures of each of the 6 digital paintings of Deity Ganapati given above. They have been compared to a baseline reading of the environment where the experiment (using PIP) was conducted. The baseline reading was taken of an empty room with a table where the various pictures were placed one by one. 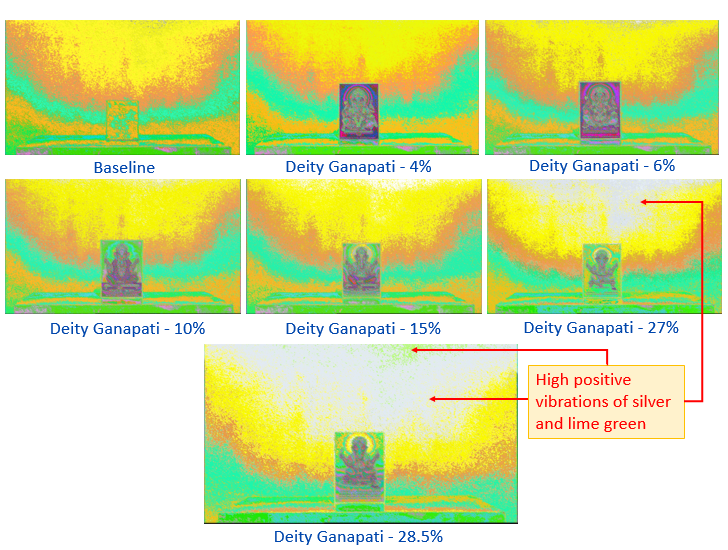 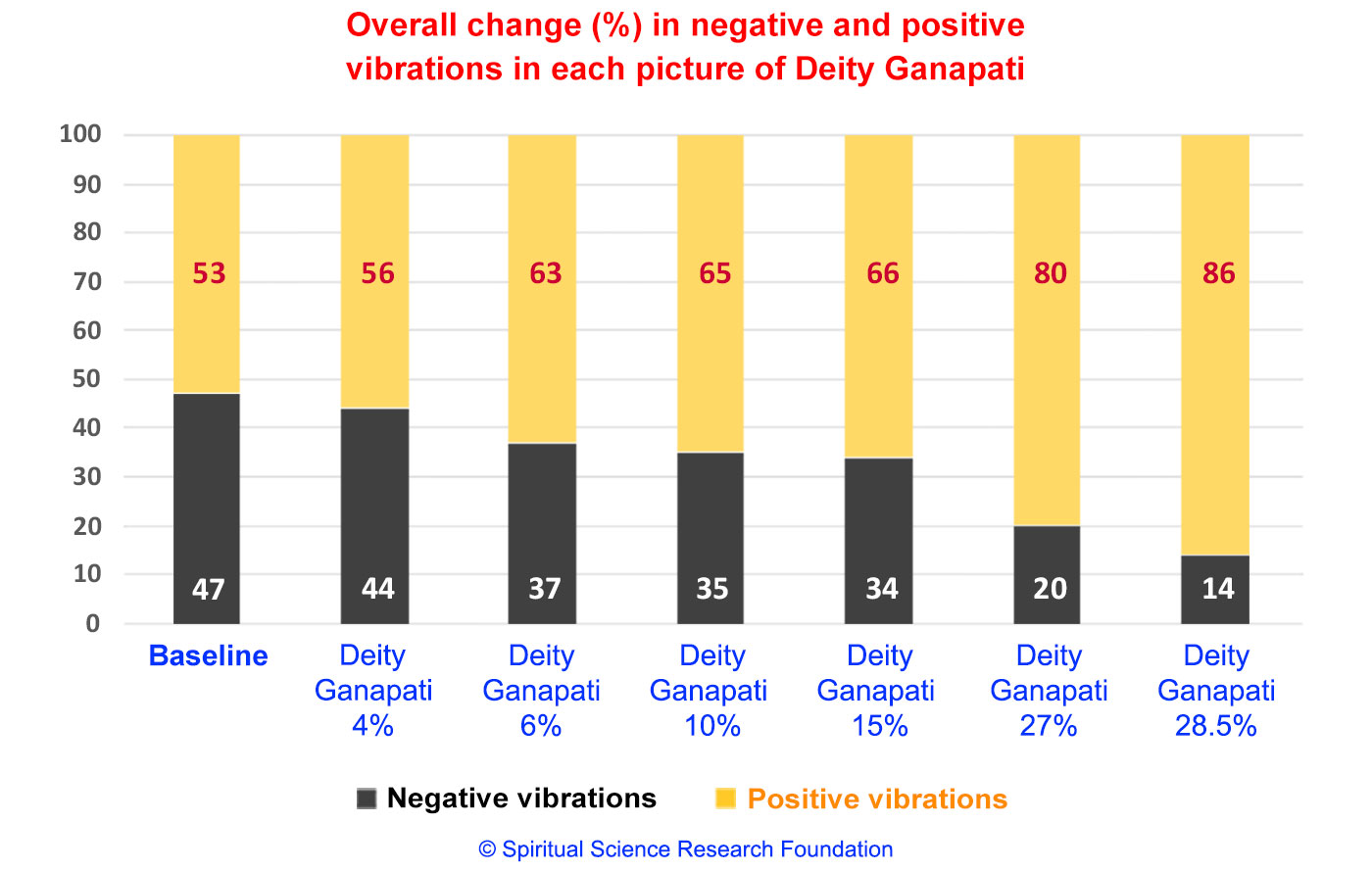 It is interesting to note that the PIP technology correctly detected the increase in subtle positive vibrations from each subsequent picture of Deity Ganapati. It was also able to detect the significant increase in positivity from 15% to 27%. Additionally, highly positive vibrations (indicated by silver and lime green colours) were detected for the last two digital paintings (accuracy 27% and 28.5%).

Any inaccuracies in relation to the form can drastically reduce the sattvikta in the painting. If the form is depicted highly inaccurately, it can even emit negative vibrations as is the case with the denigratory images shown in section 2.

The accuracy of the painting increases as the spiritual practice and motivation of the seeker-artist improves. Once the artwork becomes sattvik, the Deity Principle is attracted into the artwork and is also emitted from it. If an artist complements his/her skill with devotion to God, proportionally more sattvikta is emitted from the art.

Through spiritual research conducted with an advanced level of sixth sense, it was determined that 95% of the factors that are necessary in creating a spiritually pure painting of a deity are spiritual in nature. 80% of the factors consist of the Guru’s resolve and the blessing of the deity.

As mentioned above, seekers have had numerous spiritual experiences in relation to the pictures of Deities made by MAV. One spiritual experience of a seeker while chanting in front of the picture of Deity Ganapati with 27% accuracy is given below to show how one can practically benefit from such pictures that have been made with devotion and are highly accurate.

I had received a picture of Deity Ganapati made by MAV. I had heard that these pictures emitted a high amount of positivity, so I was eager to see what I experienced. I framed the picture and sat down to chant in front of it. I had been chanting for a few months, but this time I felt very different while chanting. I noticed that with each chant, I was feeling an incredible feeling of lightness and joy I had not experienced before. This feeling continued to intensify as I chanted longer. I wanted to just keep on chanting and experiencing more. This experience has remained in my mind to this day and it showed me how much we can benefit from the pictures of Deities MAV is providing.

We encourage artists who are interested in making pictures of Deities as a part of their spiritual practice to begin regular spiritual practice. This will help to develop the subtle-ability needed to accurately draw deities or Holy symbols. If more artists make efforts to make spiritually pure art with devotion, then it will spread sattvikta throughout society and benefit the world.