Efforts to study the energy field (aura) around objects or people with the help of machines or specific techniques have been going on for the past many decades. In 1939 a Russian inventor, Semyon Kirlian and his wife Valentina developed Kirlian photography which was believed to capture the aura around objects. After many years of researching Kirlian photography, Harry Oldfield, a UK biologist turned energy-field researcher, developed an energy field imaging system, Polycontrast Interference Photography (PIP) in the 1980s.

Polycontrast Interference Photography (PIP) is an energy field video imaging process. This technology reveals patterns of light that are not visible to the naked eye. Oldfield thought that the human energy field might possibly interfere with photons which are energy packets of light. He reasoned that ambient (surrounding) light would be interfered with by the energy field both when the incident ray travelled towards the object and when the reflected ray bounced off the object. He devised a computer program that would analyse the different light intensities being reflected from the person or object being scanned. The PIP software can distinguish between many different grades or qualities of light.

PIP is strictly a non-invasive analysis tool that can be used to reveal patterns of non-visible light that are not visible to the naked eye. Harry Oldfield believed that the future of diagnosis of medical ailments lay in finding an effective scanner that can see imbalances in the energy field rather than disease in the physical body. He used various colours calibrated into the machine; each of these colours were given a particular meaning and are used to display positive vibrations and areas of disturbances in the bio-field. This information can then be used in various ways depending on the training and experience of the investigator or practitioner. The instrument has gained a lot of popularity with researchers trying to understand how a person’s bio-field are a tell-tale sign of their future health.

At the outset, please note that SSRF’s primary method for spiritual research into the spiritual dimension and subtle energies is through advanced sixth sense.

However, since 2007 taking advantage of the advancements in biofeedback instruments, the Maharshi University of Spirituality (MAV) and SSRF have been using such instruments to study the effects of various stimuli on living and non-living object’s aura and energy field. In the case of people, some biofeedback instruments can also measure their chakras. This has been of great benefit as it helps to physically endorse and prove the research we have already done through spiritual means.

The following are the various aspects where PIP has been used to provide a different view of subtle energies.

2.1 Infrastructure and set up of PIP at the Spiritual Research Centre, Goa, India

As suggested by the PIP manual, the spiritual research team has designed a room at the Spiritual Research Centre to be completely dedicated and compliant for the use of the PIP. The following are some of the features of the room and the care that has been taken to achieve a standardised environment.

2.3 Guide to the PIP image colours

Each PIP scan generates a PIP image which has various colours in it. These colours are calibrated into the software and documented in the PIP manual (2007 edition) and each of them have been given a possible interpretation. In the table below, on the right-hand side, the interpretation of these colours as per the PIP manual have been provided. Specific colours are identified as either positive or negative. In some cases, a colour can have both negative and positive connotations and its interpretation is left to the person analysing the PIP image.

In relation to the colours of the PIP images, the spiritual research team at MAV and SSRF have gone into further detail and come up with explicit psycho-spiritual vibrational interpretation for each colour. These interpretations have been provided on the left-hand side in the table below. For example, 4 shades of green have been observed in PIP images. The PIP manual gives one type of interpretation for green in general and explains that it can be both positive and negative. The spiritual research team has identified a spiritual vibration that is associated with each shade of green along with explicitly mentioning whether it is positive or negative.

This further and more detailed calibration of PIP colours has been undertaken based on the team’s extensive experience with the instrument along advanced sixth sense and with help from expert users in PIP. All analysis undertaken now on PIP is standardised with the colour scheme on the left-hand side of the table. 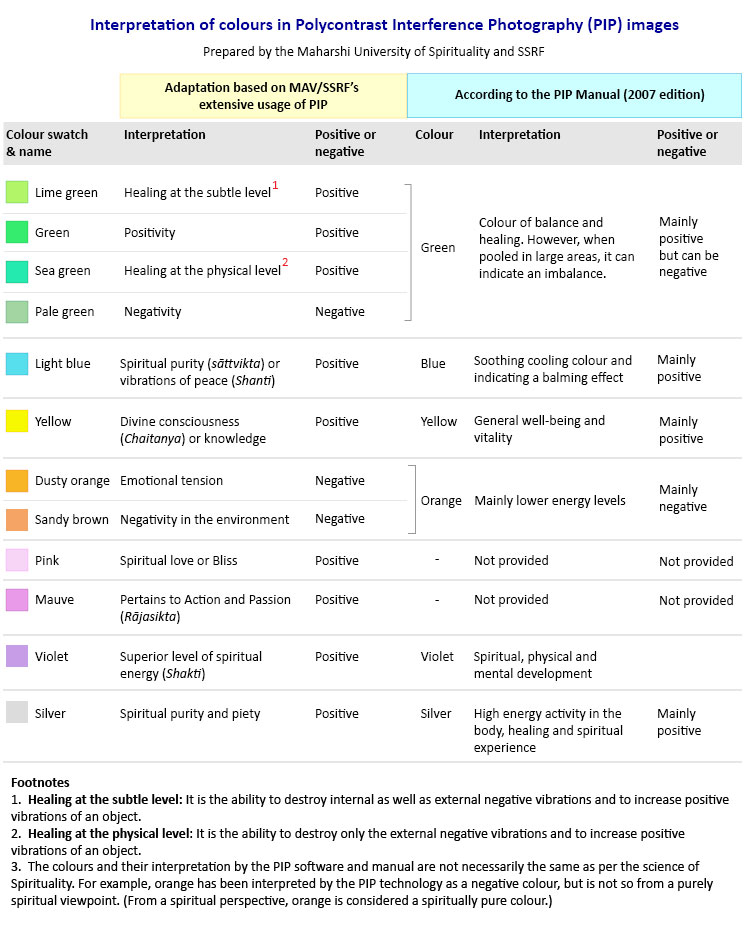 When analysing a PIP image, the colours on the object and table are not taken into consideration as the PIP technology primarily measures the energy field around an object or a person. Shadows on the object can be misleading when examining the image. Coloured skin and contours of body also can give misleading results. Hence it was decided not to include the object and table in the analysis. As the area behind the object is a flat matt-white wall, the aura shows up clearly and can be easily analysed with minimal to no interference.

The spiritual research team has devised a method to measure the total amount of positive and negative vibrations in any given PIP image. A grid is set up to overlay the PIP image using an image editing software. This makes it easier to estimate the proportion of colours in each square of the grid. Using this method, the percentage by which each colour changes between PIP images can be quantified.

Charts are prepared to summarise and aggregate the changes in positive and negative colours in the PIP image with each change of stimulus/object from the baseline reading.