To forgive someone who has wronged you may be very difficult because of spiritual factors, but to be able to forgive and move on is important for your karma and spiritual well-being. 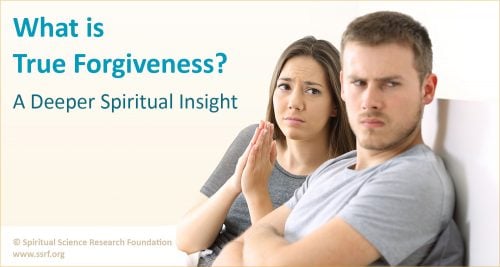 When someone hurts us deeply, it is not easy to forgive the person. It is common for our minds to be filled with anger and revengeful thoughts. However, such thoughts only harm us further. Forgiveness involves letting go of such thoughts. This may be easier said than done because depending on one’s personality and destiny with the other person, the ability to forgive itself may be compromised. To be really free from the karma of an incident one needs to be able to truly forgive, which includes forgetting the incident itself. This can only happen if one makes concerted efforts in spiritual practice.

A reporter once asked the Dalai Lama if he was angry with the Chinese for having taken over Tibet. The Dalai Lama responded, “They have taken everything from us, should I let them take my mind as well ?”

Letting go of anger and grudges has obvious benefits for one’s peace of mind and well-being.

However, is the old adage to forgive and forget really possible ? Forgive we can understand, but ‘forget’; is it wise to forget ? In this context, we may have heard the saying – ‘Those who cannot learn from history are doomed to repeat it’ which also means ‘Those who do not remember their past are condemned to repeat their mistakes’.

So, what does it really mean to forgive and is it prudent to forget ?

The topic of forgiveness and its merits at a psycho-physical level have been discussed extensively and can mean different things to different people.

On the definition of true forgiveness however, there has been much debate over whether it also requires positive feelings towards the offender. Most experts, however, agree that it at least involves letting go of deeply held negative feelings such as thoughts of indignation, anger, hate, revenge and resentment. It also includes letting go of expectations that the other person should apologise.

As with anything, to have a robust and holistic definition, it is important to look at it not only from a physical or psychological perspective but from a spiritual perspective as well. This is because a large proportion of the events (good or bad) that happen in our lives is dictated by the karma or destiny we have to undergo. Adverse karma or destiny is a spiritual problem. This therefore means that most of the significant events that take place in our lives, where we feel we have been aggrieved and we need to forgive to move on, are usually karma related.

What is true forgiveness ? 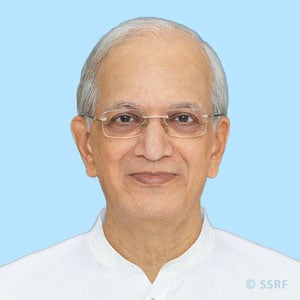 Paratpar Guru Dr Jayant Balaji Athavale, who is the inspiration of SSRF and guides the spiritual research team, has provided a definition of what true forgiveness means from a spiritual perspective. A Paratpar Guru means a Guru of the highest level, and is someone who is above the 90% spiritual level.

“True forgiveness means not only forgetting the feelings of anger and revenge, but to forget the incident as well.”

3. Gaining a deeper insight into the concept of forgiveness

We are all born with a certain amount of destiny. Destiny is that part of our lives which is not within our control. Based on the impact of our actions from previous lives, our lives are full of destined events that will decide the units of happiness or suffering we have to undergo. This is based on merits and demits accrued from previous lives. In the current era, approximately 65% of the events in our lives are destined, while 35% of life will be as per our free will.

All major life events like marriage, good and bad relationships, accidents and major illnesses are mostly caused by one’s destiny. Therefore, the suffering and pain that needs to be undergone due to destiny often plays out through such events. The people that give us the maximum pain or happiness in our lives are also mostly doing so as they could be settling accounts from previous lifetimes.

So, how does all this relate to our topic on forgiveness from a spiritual perspective ?

Let us take a hypothetical example of 2 scenarios. 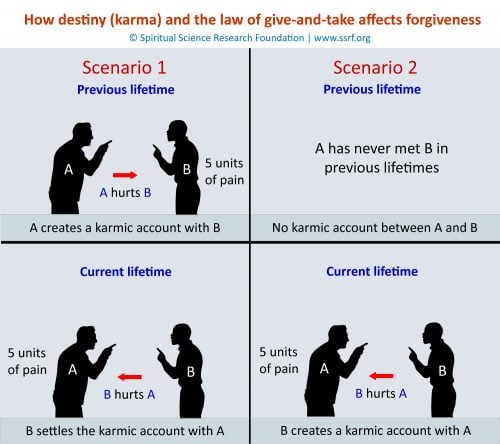 How will these two scenarios affect Person A’s capacity to forgive Person B ?

In scenario 1, in the current lifetime, after Person B has returned the 5 units of pain to Person A, he (Person A) will find it easier to forgive Person B. This is because Person B is just settling the account and the give-and-take account centre in Person A subconsciously considers that the account has been settled. 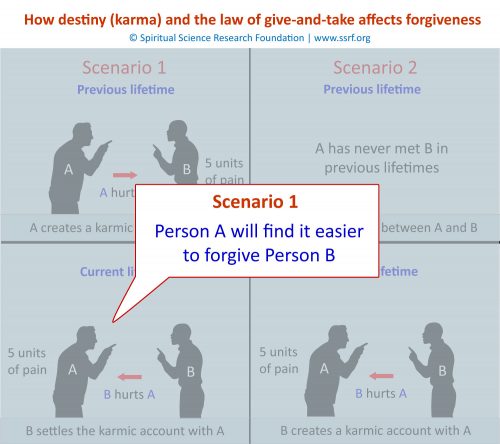 In scenario 2, however, since a new account is being created by Person B, Person A will find it more difficult to forgive Person B. 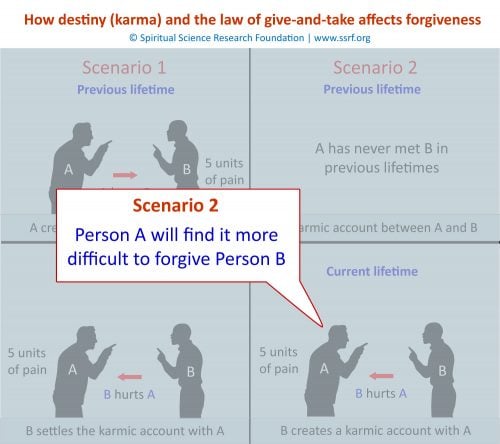 Now, there is another perspective that we will add on to scenario 1 that we learned through spiritual research. If Person B were to work on forgiving Person A in the previous lifetime, then in the subsequent lifetime, the adverse destiny that Person A would have to undergo would be less. But for this Person A should also need to feel completely repentant, then only will the sin or demerits he incurred be reduced to some extent. So, while the negative account will still be there, the intensity of the suffering that Person A has to endure due to the negative karma of harming Person B will reduce.

People who tend to truly forgive and those who are truly repentant are usually people who have more qualities than personality defects and are at a higher spiritual level. Such a person would be more generous and empathetic as opposed to harbouring feelings of resentment and revenge.

Personality defects and their effect on forgiveness, the Law of Karma and the give-and-take account 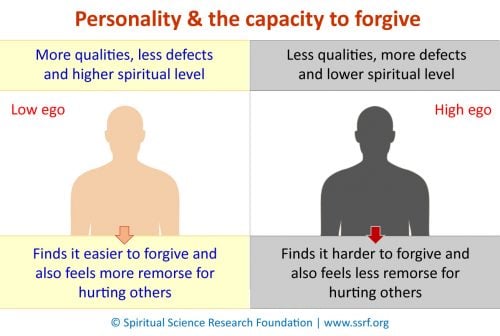 If a person were to have more personality defects such as anger and revengeful nature and also have more ego such as feelings of pride, then the ability to forgive or repent would be greatly diminished. 98% of one’s personality is inherited from impressions from previous lifetimes.

When such people hurt each other, they go into a vicious cycle of negative give-and-take accounts that can play out like a ping pong battle through lifetimes of hurting each other. Personality defects also do not allow accounts to be settled and in fact, may increase them. Given below is an illustration of how this happens. 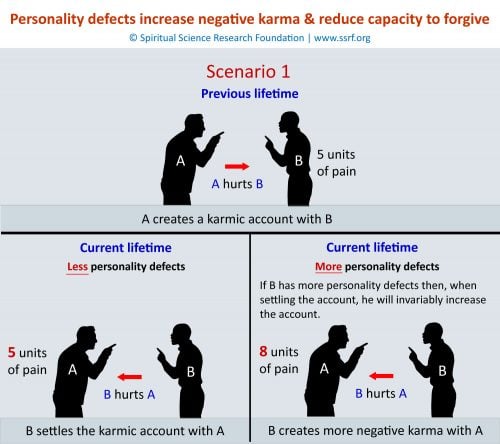 4. The effect of negative energies on forgiveness 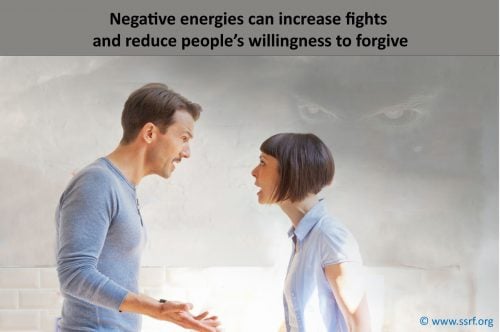 Sometimes in life, the participants in a give-an-take or karmic account are not the only two participants, but a third element can also be present, which is a subtle entity with evil intentions. Such subtle entities are termed as negative energies.

Let’s say a situation was to generate 20% of anger in the 2 people involved in a dispute. If one of the participants were to be possessed by a negative energy, it would mean that he/she would be under the control of the negative energy. The possessing entity by covering both people in black energy could aggravate the situation between the two people, thereby creating an adverse outcome that is disproportionately higher than what would have been normally expected. Such interference by negative energies also makes it more difficult for the people involved in the dispute to forgive.

The reason we are bringing this up is because such occurrences play a significant role in today’s world. Through spiritual research, we have found that approximately 30% of the world’s population is possessed by negative energies, while approximately 50% are affected by them in the current era. This means that 80% of the world’s population is prone to attacks by negative energies and that they can actively influence discord between people.

Such entities are able to possess and affect people because of the general lack of spiritual practice as per universal principles that is prevalent in the world today, along with the fact that negative energies use people’s personality defects such as anger, greed and hate to create more problems for people and society.

Any discord between two or more people can be due to :

5. How spiritual practice helps in forgiveness

At the outset, just holistically understanding the subtle/spiritual factors that can be at play in any discord (along with the physical/psychological factors) gives people a philosophical viewpoint to help overcome their anger and resentment and move on. It also provides insight as to why some people may find it easier to forgive than others.

The concept of forgiveness is inherently a spiritual issue and is affected by give-and-take accounts and destiny (karma) just like in scenario 1 between Person A and Person B. If a problem at its root is due to spiritual reasons, then the best way to settle or overcome such problems is through spiritual solutions.

By working on forgiving another person, it helps in the spiritual progress of the forgiver and enables one to grow faster spiritually. This is because by working on forgiveness, the person is less likely to create more karmic accounts with the person who has hurt him. Also, with spiritual practice the negative impressions in the mind towards the other person reduce. Eventually, as one goes beyond the 70-80% spiritual levels, one starts experiencing an observer stance (sakshibhav) towards life situations. At this level, the person experiences that the world around him is Maya (the Great Illusion) and the only reality is the Soul Principle (the God Principle) within him. As he identifies less and less with his 5 senses, mind and intellect and only identifies with the Soul within, he is able to overlook all incidents as part of the Great Illusion and hence remains stable. Due to this, he is not only able to forgive but also forget about the incident where he may have been the victim.

Both adverse destiny and being affected by negatives energies as we said earlier are spiritual problems and they have to be treated using spiritual solutions. By doing spiritual practice one gains spiritual energy and positivity which helps to let go and move on.

The best long-term spiritual solution to increase forgiveness is practising Spirituality as per Universal principles. We recommend chanting the Name of God. This practice helps to purify negative give-and-take impressions in the subconscious mind. We also recommend practicing the Personality Defect Removal process to reduce personality defects and enhance one’s qualities. This enables one to be able to forgive others and also to be a better person.

5.1 Other questions on forgiveness

1. Is there any sin that is not forgivable and where it is impossible to redeem oneself ?

Answer : No. All acts that have caused suffering to others go towards one’s accumulated destiny or sanchit karma. One has to undergo suffering that is commensurate with one’s acts as one’s destiny in some lifetime.

Answer : These are acts which harm the spread of Spirituality such as misleading society in Spirituality or harming a Saint who is above the spiritual level of 80%.

3. How can I seek forgiveness from God ?

4. Taking the same example of scenario 1 (given above in section 3), what happens to the account with Person A, if Person B does spiritual practice and attains Moksha or Final liberation ?

Answer: In such a case Person A will not experience the suffering at the hands of Person B but will none the less experience suffering due his destiny which will be orchestrated by God.

Forgiveness sets others free, but mostly, it sets us free. When one does spiritual practice, it becomes easier to forgive and both these aspects help to achieve faster spiritual growth. The duration and intensity of negative thoughts and revenge reduce significantly, and one leads a happier life.