1. Introduction to the evaluation of soil and land

In Part 1 –  How SSRF and the Maharshi Adhyatma Vishwavidyalay (also known as the Maharshi University of Spirituality or MAV) went about setting up the experiment and also some of the key findings for each type of soil were covered. Part 2 goes into more detail providing insight into how soil is affected by people. An analysis of how some of the world’s biggest tourist destinations are actually fraught with negative vibrations is also included.  The most spiritually pure soil sample in the world out of the 169 samples measured at the time of this report is revealed. The study is still underway, and it is planned to continue measuring at least a thousand more soil samples from around the world.

2. Case study – The negativity in the soil and water samples from the Taj Mahal 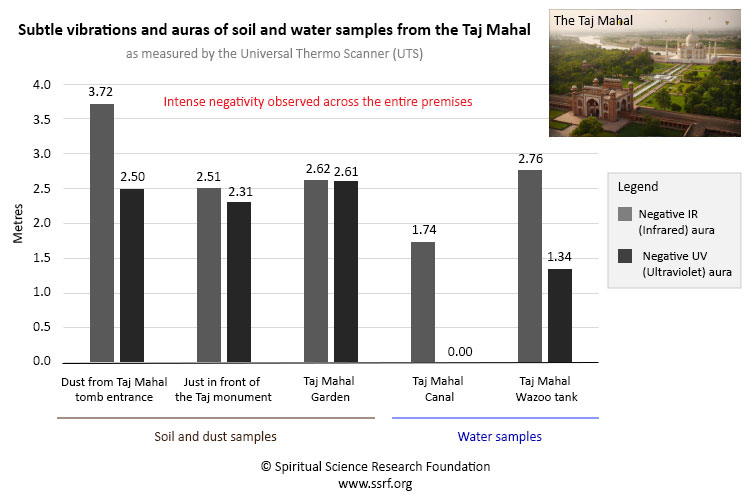 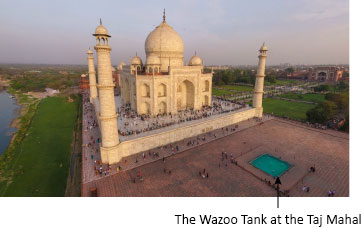 The dust from the Taj Mahal tomb entrance had the highest Negative IR aura reading of all soil samples from heritage sites.

The Wazoo tank just next to the Taj Mahal had the highest Negative IR reading of all the water samples worldwide.

2.1 The subtle battle between the River Yamuna and the Taj Mahal

Interestingly just behind the Taj Mahal flows the River Yamuna. Even though the river has been known to be quite polluted (at the physical level), the UTS readings were very positive. It had no signs of any negative vibrations and this is despite its proximity to the Taj. So, this uncovers an interesting and important finding and concept in relation to land and water. Physical pollution does not mean spiritual pollution and alternatively having a clean and neat place does not mean that it is spiritually clean. 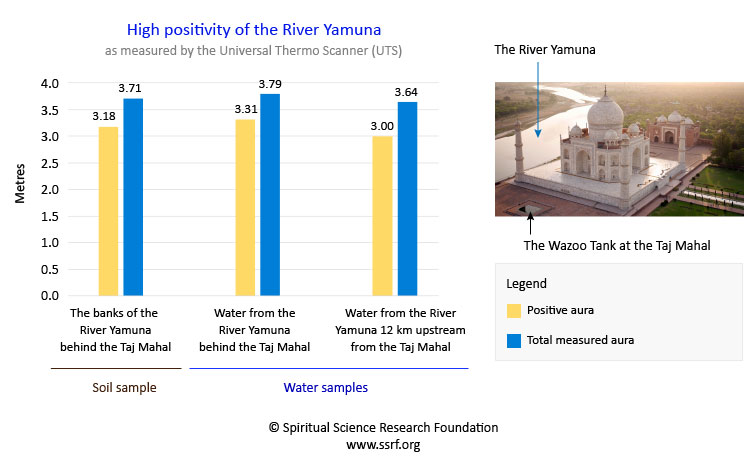 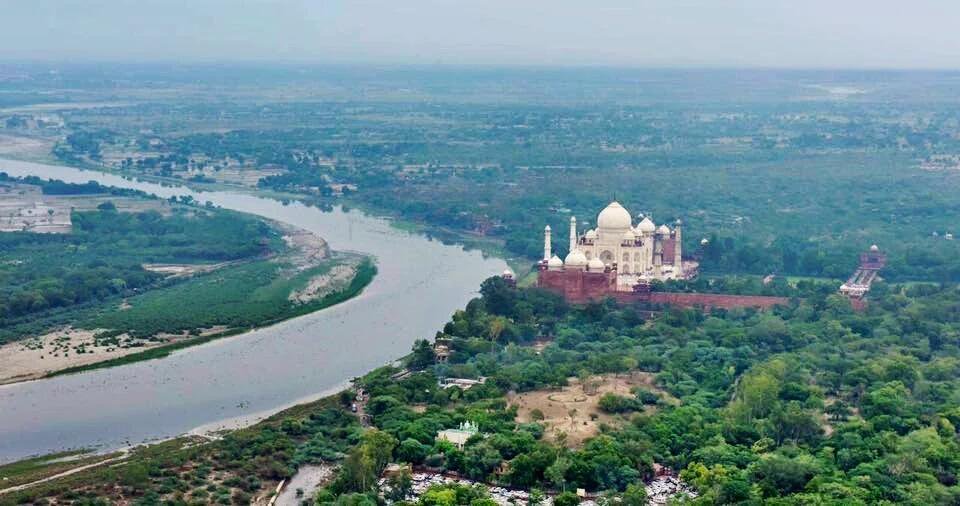 The spiritual research team has seekers who can actually perceive the vibrations emitted by people and objects. By drawing them they serve as spiritual X-rays and provide clarity about the true nature behind the cause of events. The picture below shows the subtle vibrations of the River Yamuna and the Taj Mahal and their subtle interaction with each other. (The subtle artist has drawn what she saw in the subtle while looking at the above aerial picture of the River Yamuna flowing by the Taj Mahal.) 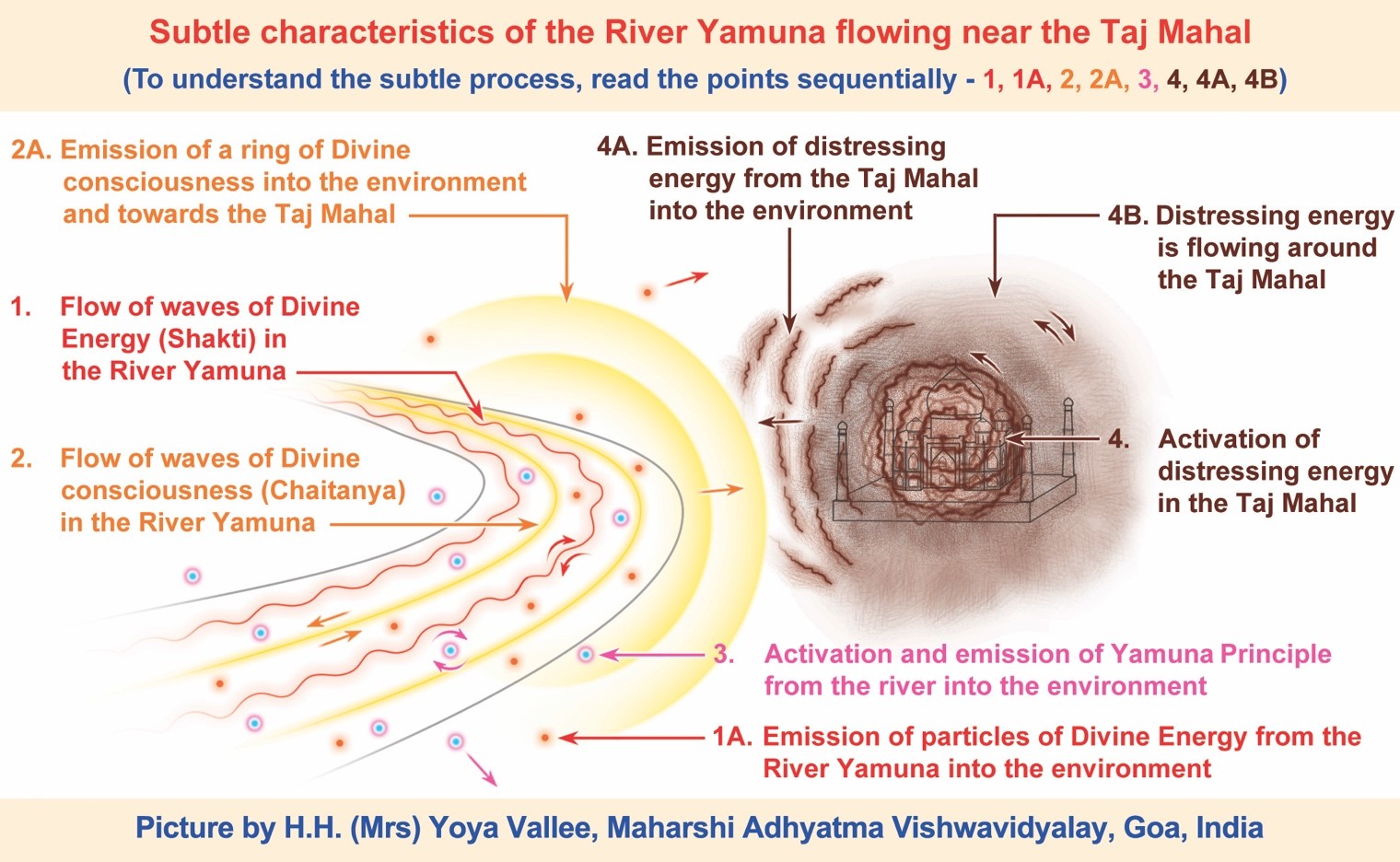 We found through spiritual research that it was nature’s Divine way of fighting with the negativity of the Taj Mahal or other areas of negativity. This subtle picture shows that there is a subtle battle ensuing between the Yamuna and the Taj and how Divine consciousness is continuously flowing towards the Taj Mahal. This reduces the negativity in the environment from the Taj Mahal and keeps its negativity in check from spreading over a larger area.

Why is the Taj Mahal so negative from a spiritual perspective ?

The Taj Mahal is basically a tomb. Tombs of spiritually average people emit negative vibrations just like any graveyard would. However, with the tremendous flow of tourists and visitors to the Taj Mahal, it has become an ideal site for negative energies to adversely affect people. To this end, the entire premises in the subtle has been captured by negative energies and infused with even more negativity. Hence, the entire premises is badly affected from a spiritual perspective and so every unsuspecting tourist that visits the heritage side is also adversely affected.

So far, some of the heritage sites apart from the Taj Mahal found to have both negative IR and negative UV readings are given below

Other heritage sites especially those that were associated with violence such as the Colosseum in Rome or Alcatraz Island on San Francisco Bay, USA are likely to have high levels of negative vibrations.

3. The most spiritually pure soil sample sample measured so far 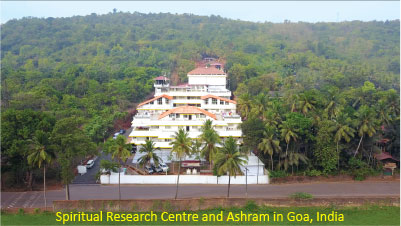 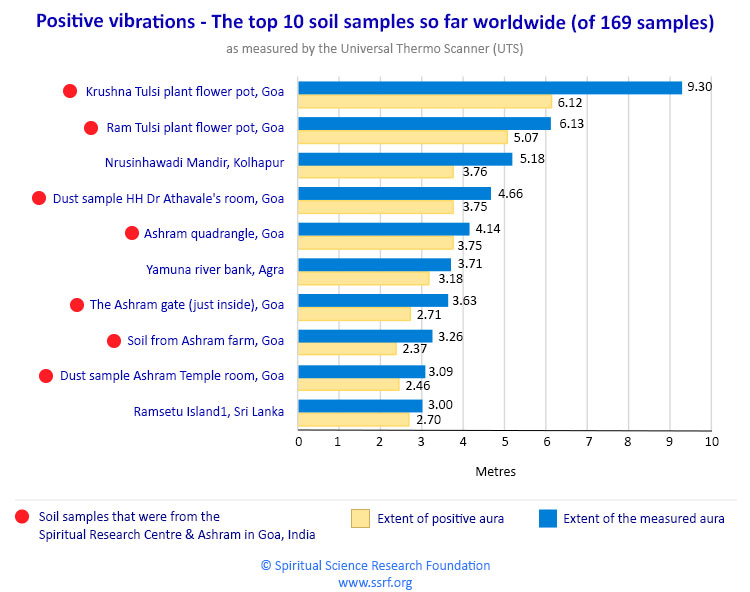 The soil samples from the Spiritual Research Centre had far greater levels of positivity than samples from within the vicinity of its premises. In fact, a soil sample that was collected just outside the Ashram premises had 50% less positivity. The readings of the soil and water samples within the Ashram seem to show that the Ashram is in a big bubble of intense positive vibrations, which positively affects every object and person within its premises.

This is an image (see below) of the flower pot on the balcony of His Holiness Dr Athavale’s room, from which the soil sample that had the highest positive aura of 6.12 metres and a total measured aura of 9.30 metres was collected. H.H. Dr Athavale Himself waters this Krushna Tulsi (Holy Basil) plant daily. 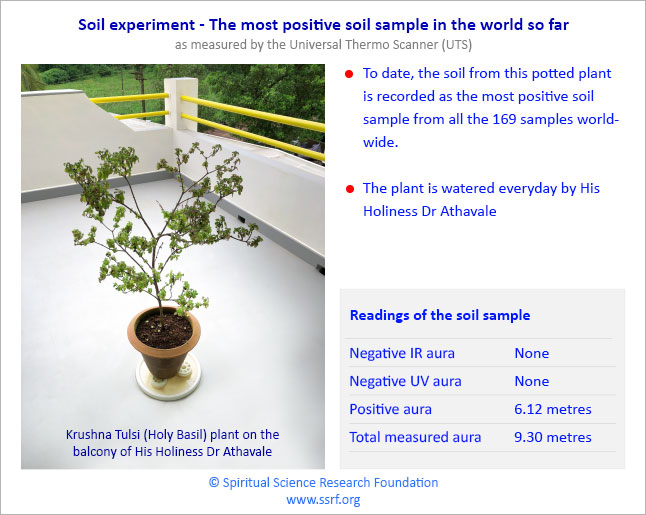 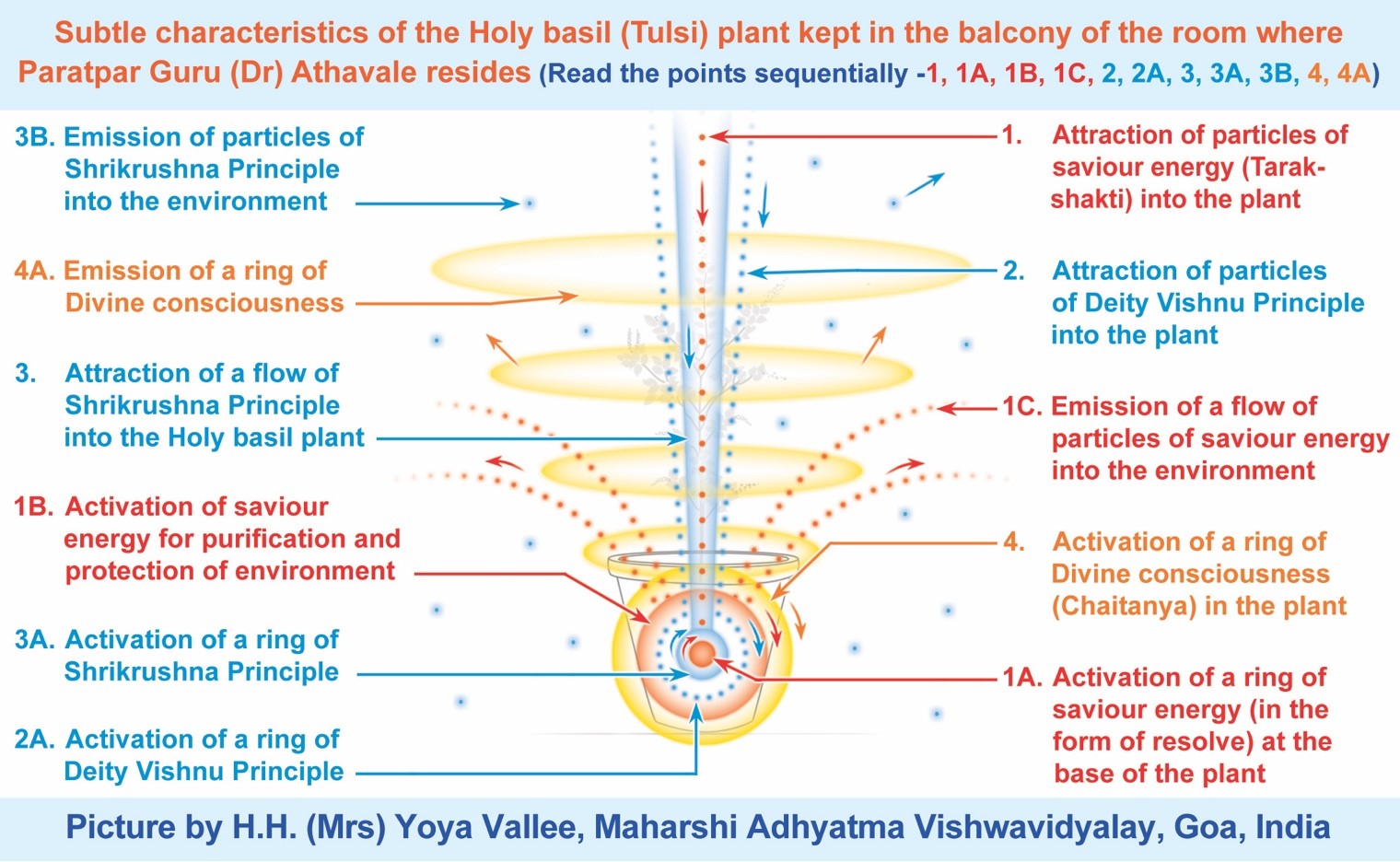 4. How come there were so many soil samples from India with a positive aura?

Of the 68 samples from India, 45% of them actually had a positive aura. With India being the only country with such a high proportion of soil samples emitting a positive aura, one may ask as to why this was so. There are many reasons and here are a few.

5. How humankind is affecting the subtle vibrations of the environment 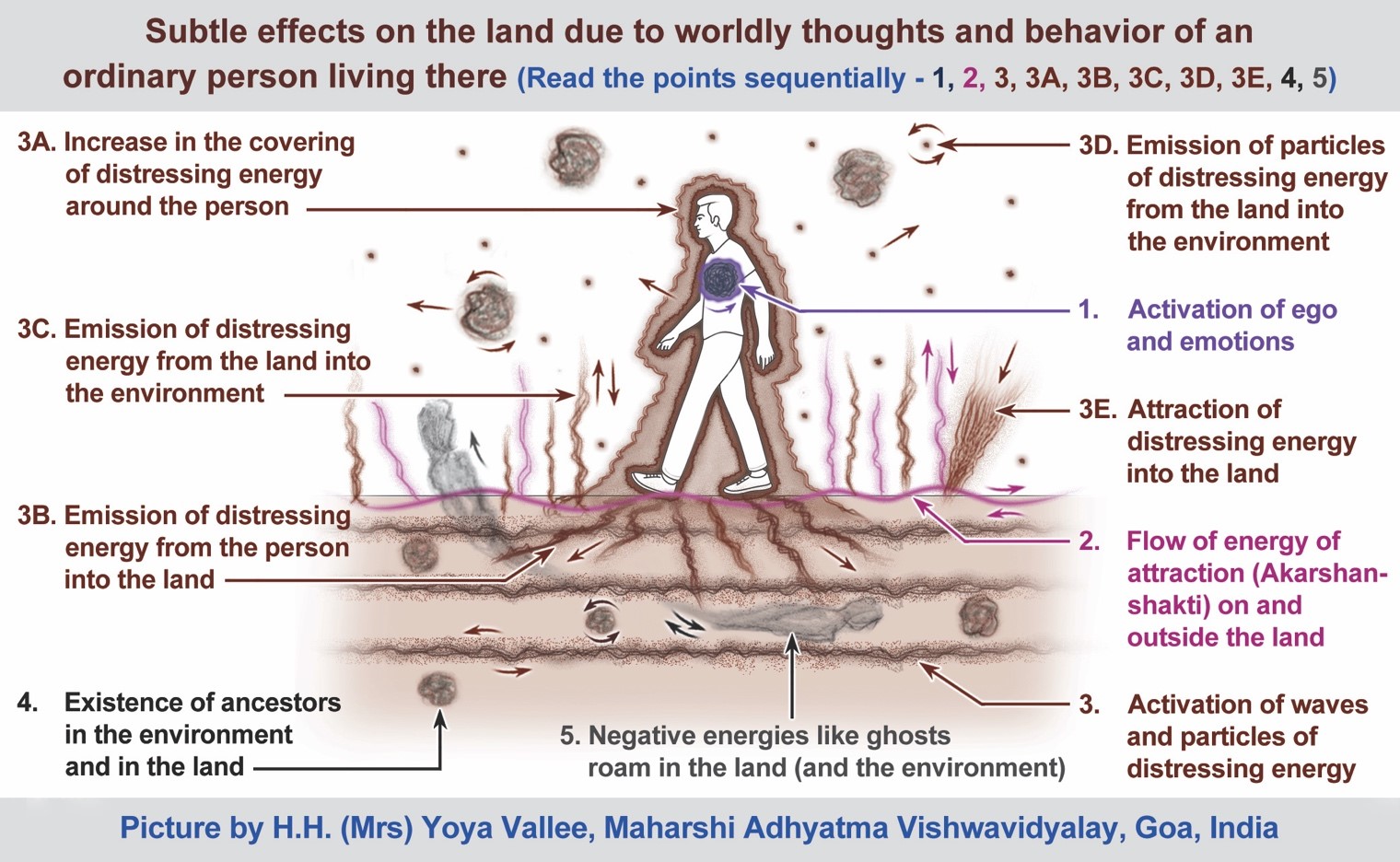 This is a subtle picture of how human is affecting the environment and what it shows is how each person’s thoughts and attitudes due to their materialistic behaviour, lack of Spirituality, personality defects and ego send subtle negative vibrations into the environment and get absorbed by the land and water, flora and fauna. Along with this, negative energies capitalise on this lacking in humanity and increase the overall negativity in the environment. Another aspect is that most people may have forgotten the suffering from social upheavals and wars that led to millions of deaths over the centuries, but the soil has not and has retained the memories of these adverse events as negative vibrations.

6. Why are soil samples from religious places recording such high levels of negative vibrations ?

Well, the short answer is that ‘negative energies’ from the subtle realm attack such places affecting both the priests and the devotees. This reduces their ability to practice Spirituality and hence the spiritual positivity of the environment. Unless there is the presence of Saints and their guidance to devotees, they are not able to grow in their spiritual practice. The religious places that were not affected were places where true Spirituality was being practised, where Deity principles were active, or where a Saint was residing.

7. What are the implications of such a study ?

8. Suggestions to land developers and architects – how we can use this information

There are a few things that land developers can do to increase the spiritual positivity in the environment.