This article has been published by the Spiritual Science Research Foundation based on the research conducted by Maharshi Adhyatma Vishwavidyalay (also known as Maharshi University of Spirituality) in Goa, India. 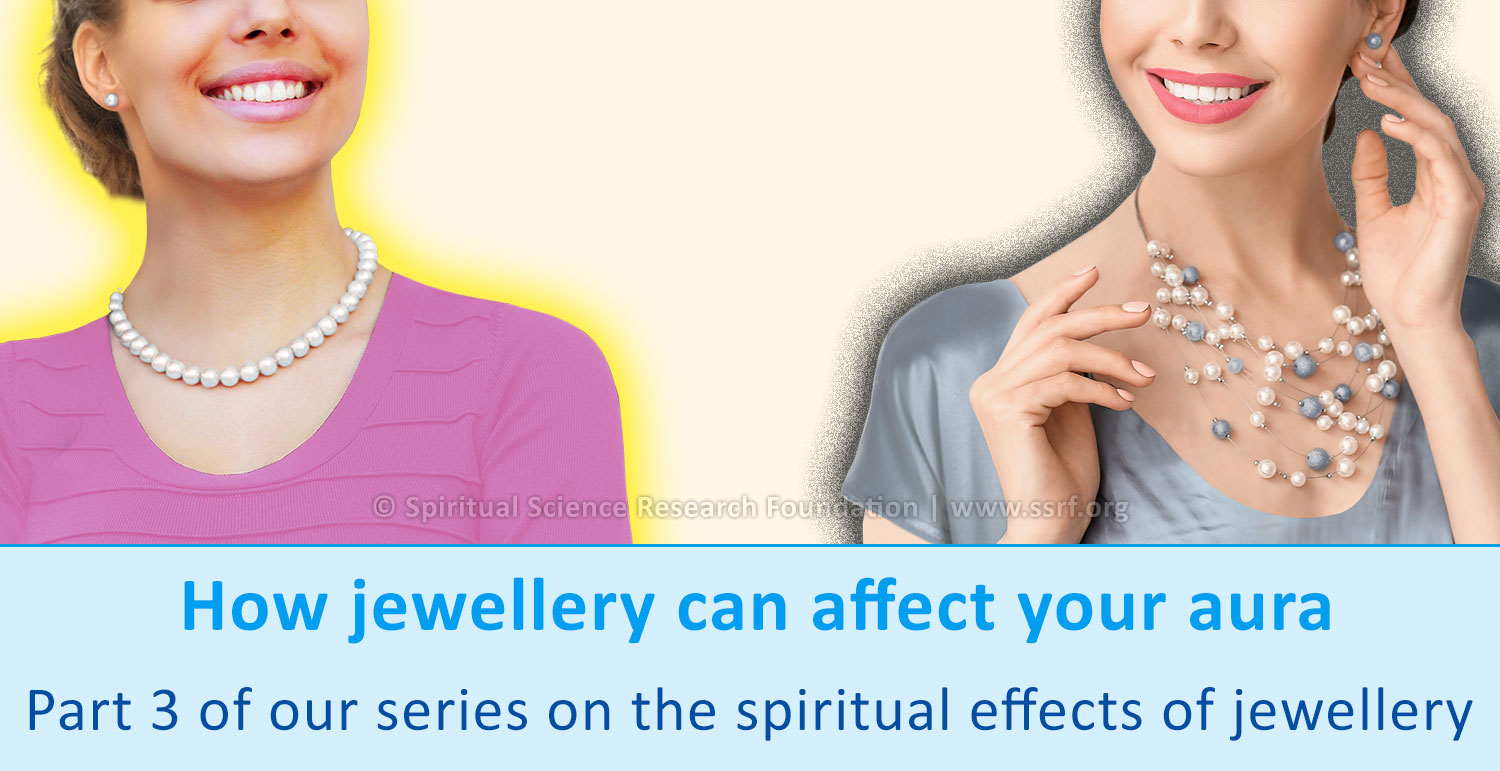 Would you buy or wear a piece of jewellery if you knew it would deplete your aura ?

Chances are that your answer would be an emphatic ‘no’. For that matter, no one would knowingly want to wear any object if it would rob them of their positive aura and replace it with a negative aura.

Yet when putting on some jewellery, one hardly gives a thought as to how it could affect one’s aura. A woman may typically have thoughts such as, 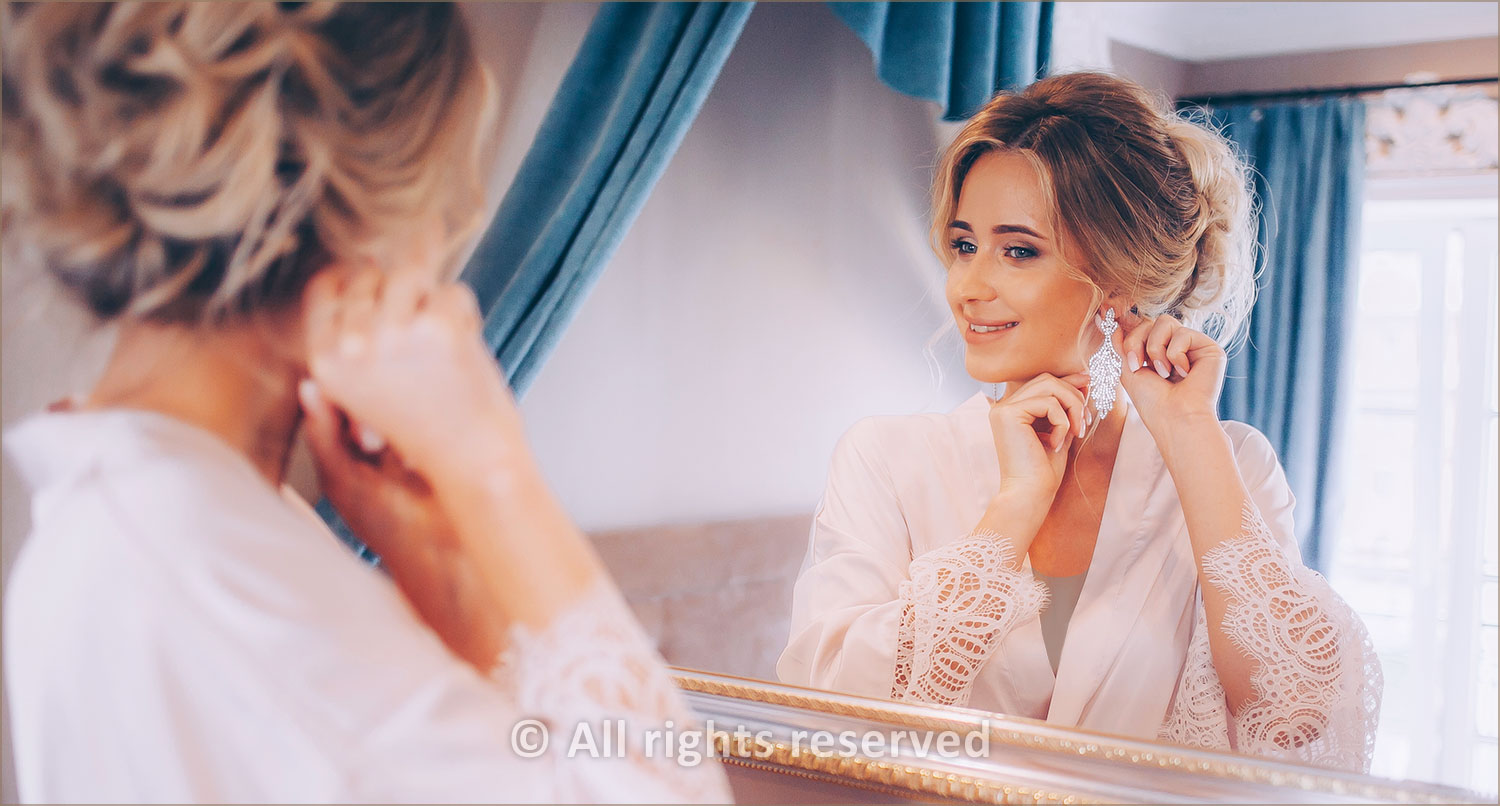 But do questions like “Is the jewellery emitting spiritually pure vibrations ?” or “How will my necklace affect my aura ?” cross women’s minds ? No, these are thoughts, which will rarely cross a lady’s mind. Not when she is buying jewellery, and not when she is wearing it or taking it off. The fact remains that if one’s aura is negatively affected, it will have a ripple negative effect on one’s spiritual, mental and physical well-being. These negative effects culminate in problems such as negative thoughts, depression, excessive sexual thoughts, lack of energy, being attacked by negative energies, etc. 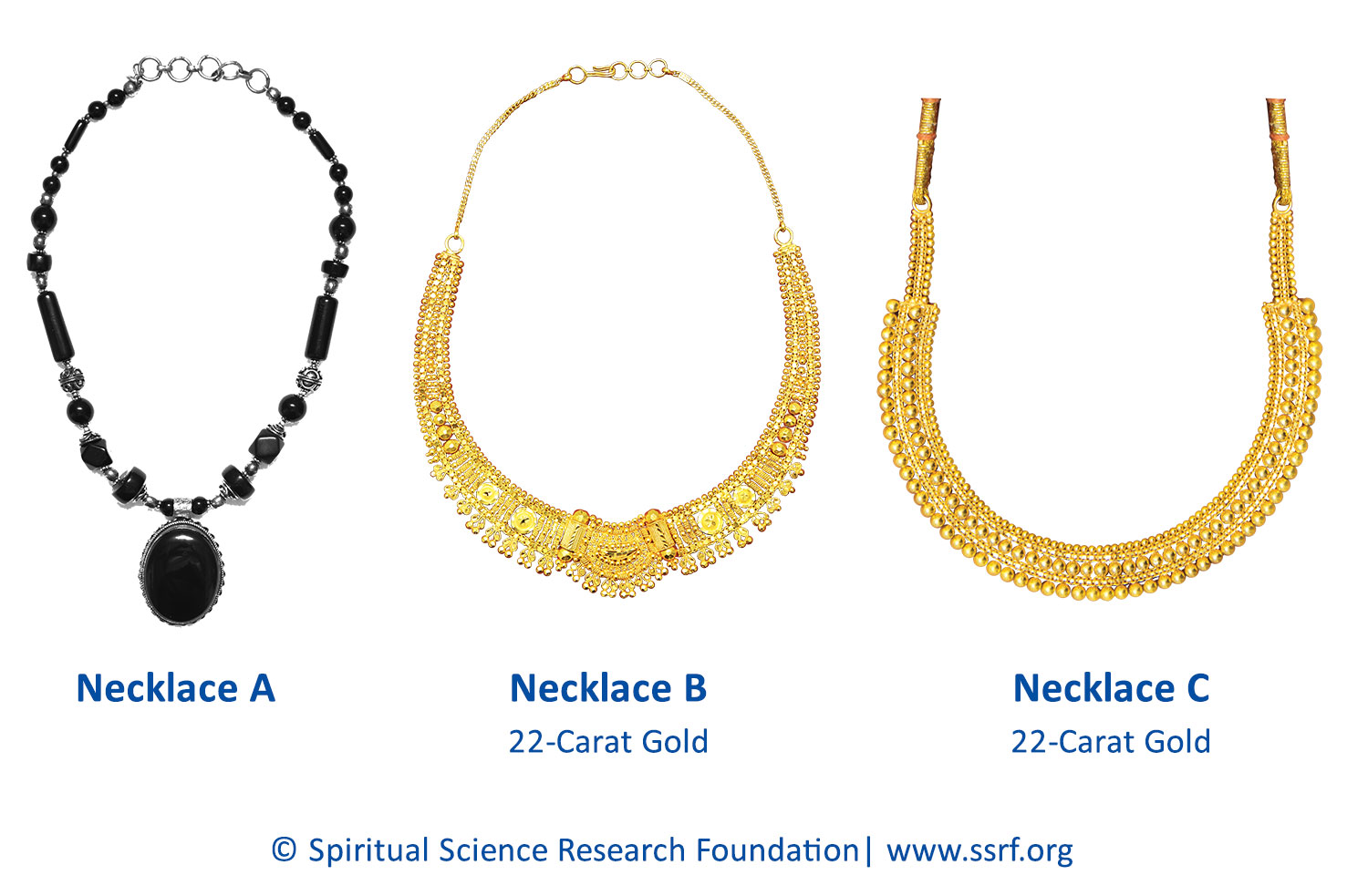 It would stand to reason that because jewellery has direct contact with one’s skin, these subtle vibrations will impact the wearer. In this article, we will demonstrate how this is so.

2. Experiment to demonstrate the effects of subtle vibrations emitted from jewellery on the wearer

Background and set up of the experiment

To measure the effect that the necklaces had on the subjects’ auras, we used an aura and subtle energy scanner known as the Universal Aura Scanner. It is an instrument that has been developed by Dr Mannem Murthy (a former nuclear scientist) in India. It has the capability to measure the type of subtle energy (whether positive or negative) and the distance of the aura around any object (living or non-living). If you would like to learn more about the UAS and how to interpret its readings, please refer our article – Information on the Universal Aura Scanner (UAS).

Experiment to study the subtle impact of various necklaces when worn

The subject who was not affected with spiritual distress is shown above wearing all three necklaces. Like this, the 2 subjects were asked to wear each of the 3 necklaces (one-by-one) for 30 minutes. Their auras were measured before and after wearing each necklace for the 30-minute period.

The following table provides a quick summary of the effect that each necklace had on the two subjects after being worn for just 30 minutes. 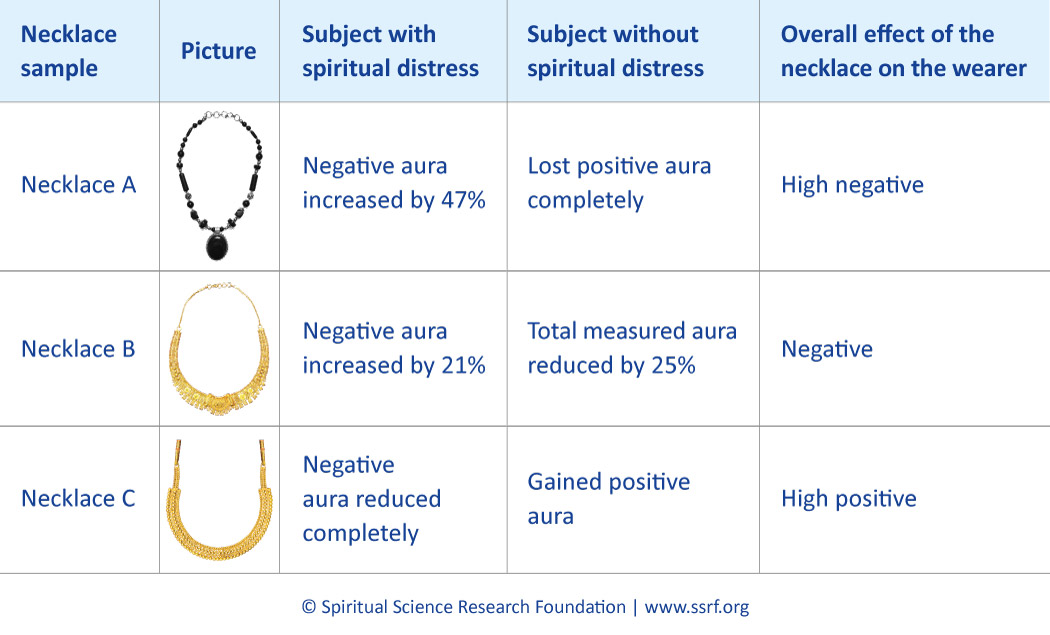 How necklaces affected the aura of the women wearing them

If jewellery is not sattvik or is spiritually impure, it will tend to emit negative vibrations. This negatively affects the respective chakra (a subtle energy centre of the Kundalini system) in the region where it is worn. This will also negatively affect the organs which receive vital energy from that chakra and can lead to various ailments. For example, when we wear a spiritually impure piece of jewellery that touches the chest region, it affects the Heart chakra or Anahat-chakra. This can affect the mind and makes it unstable and weaker. It can also generate negative thoughts and feelings of depression.

We have seekers in the spiritual research team who are able to perceive the subtle dimension with the help of their advanced sixth sense or extrasensory perception. Through their sixth sense of vision, they are able to visually perceive the subtle effect of wearing spiritually purer jewellery.  By drawing what they see in the subtle, these pictures serve as spiritual X-rays and provide clarity about the true nature of the piece of jewellery and its effects on the wearer. We would like to share with you some pictures based on subtle knowledge which show the actual effect of sattvik or spiritually pure jewellery on the person wearing it. 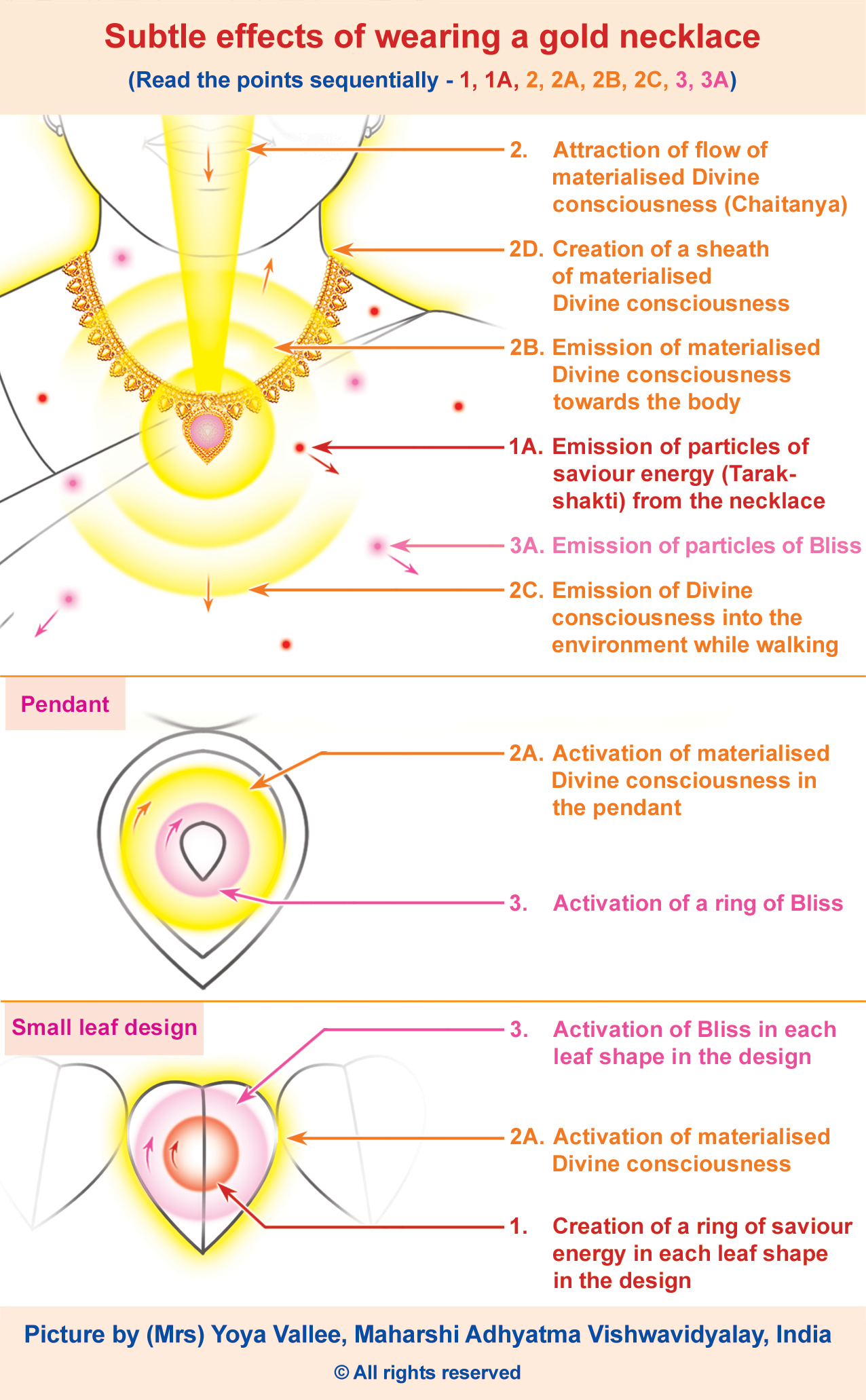 Here is an example of the effect of sattvik dangling earrings. The interesting thing about this design is that it attracts and gives rise to positive energies and vibrations of Bliss, which is a superlative form of happiness. It is the movement of the dangling part that helps spread the positive energy. 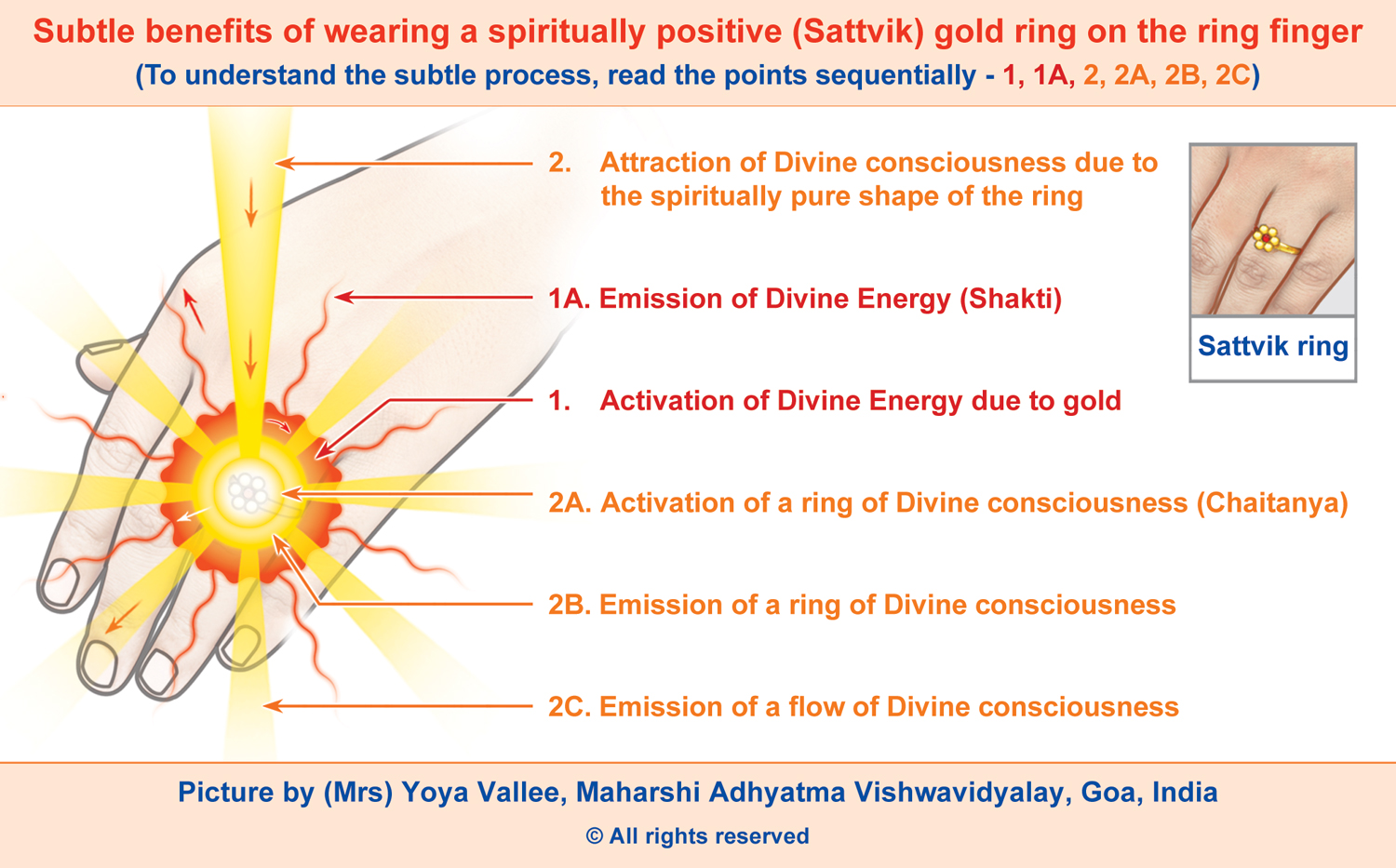 This is an example of the effect of a sattvik ring and how it has the ability to attract positive energy and emit it, thus benefitting the wearer and the environment.

The team at Maharshi University of Spirituality has 40 years of experience in spiritual research. One of the most important messages it has for the world is that we need to pay close attention to the spiritual vibrations we generate or expose ourselves to in our daily lives. This is because spiritual vibrations have a ripple effect on our lives and the lives of others. The jewellery that we buy and wear is no exception. Based on our findings, the following are a few thoughts to keep in mind in relation to jewellery.

Note from the Editor : We invite jewellery makers and jewellery brands to work with us to help make this industry more sattvik.