1. Introduction to the spiritual aspects of jewellery design 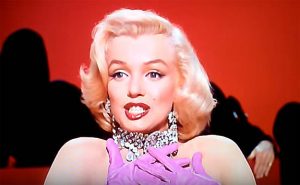 When Marilyn Monroe performed ‘Diamonds Are a Girl’s Best Friend’, it was an iconic performance, which in essence captivated the fascination women have for jewellery.

Jewellery, conventionally a female domain, is very dear to a woman’s heart. It is very difficult to fathom the full gamut and depth of emotions that a woman experiences in relation to her jewellery. Beyond the look and feel, jewellery is inextricably linked to her personality and is an intrinsic part of who she is. With every piece of jewellery comes memories attached; it could be a mark of social status, an heirloom, a legacy or a symbol of love. For some, it could have religious sentiments attached to it and represent a means to gain spiritual protection.

For a woman, selecting and buying jewellery is a very engaging and immersive experience. Be it big or small, picked from the finest collection or just a simple piece of work, there is a lot of deliberation that goes into buying jewellery.

However, is there something beyond the financial value and aesthetic appeal of jewellery, which one needs to consider ?

The short answer is ‘yes’.

Spiritual research has shown that jewellery, depending on how it is crafted, will emit positive or negative vibrations, which will accordingly affect the wearer at a subtle level.

In this 3-part article series, we elaborate on this concept and share with our readers the various aspects of jewellery from a spiritual perspective.

Part 2 – What are the factors (such as metal used, stones, etc.) that will contribute to the type of subtle vibrations emitted by jewellery

Everything has subtle vibrations associated with it.

As per the science of Spirituality, there are 3 subtle components that make up the universe, called Sattva, Raja and Tama. They are in all of creation, visible and invisible. A predominance of the Sattva component instils spiritual knowledge and spiritual purity in a person, Raja incites action, and Tama induces spiritual ignorance and inertia. The subtle vibrations (positive or negative) emanating from anything and everything are dependent on the dominant subtle basic component they are comprised of. These subtle vibrations cannot be perceived with our five senses, mind or intellect, but if one has sixth sense, one can quickly analyse whether an object is spiritually pure and if it is sattvik or not.

This spiritual concept applies to jewellery as well. Depending on the design and how the jewellery is made, it can either emit positive or negative vibrations. Since jewellery is worn on the body, it can impact us to a great extent due to the direct contact. If it is more Raja-Tama predominant and if worn often, it can lead to various problems at the physical, psychological and spiritual levels.

Such analysis about subtle vibrations can only be undertaken using one’s sixth sense, which needs to be of an advanced level. However nowadays, with the technological advancements in aura and subtle energy scanners, we are able to some extent measure the type and extent of subtle vibrations associated with objects.

3. Experiments to demonstrate the subtle vibrations emitted by jewellery

Background : The Maharshi Adhyatma Vishwavidyalay (also known as the Maharshi University of Spirituality), Goa, India along with SSRF have collaborated on many experiments on jewellery. The experiments provided below were conducted with the aim of demonstrating how jewellery emits subtle vibrations. Two of the experiments were conducted using aura and energy scanners, while the third was conducted through the medium of the advanced sixth sense of the members of the spiritual research team.

Skip to the findings of the experiments on jewellery design.

Methodology : For this experiment, an aura and energy scanner called the Universal Aura Scanner (UAS) was used. It is an instrument that has been developed by Dr Mannem Murthy (a former nuclear scientist) in India. It measures the type of subtle energy (whether positive or negative) and the aura around any object (living or non-living).

Three necklaces (shown below) were measured for the subtle energy they emit. One was a necklace that could be categorised as ‘fashion jewellery’, ‘costume jewellery’ or ‘junk jewellery’. The other two were 22-carat gold necklaces with different designs. 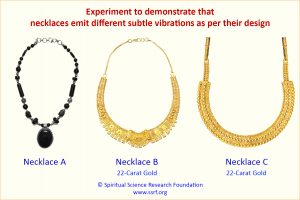 Results : After measuring the three necklaces with the UAS – the following were the results. 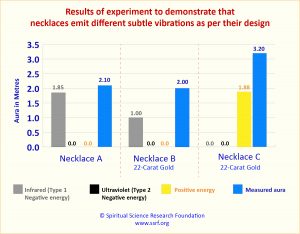 Methodology : Later, we took readings with another aura and energy scanning technology known as Polycontrast Interference Photography (PIP). This technology reveals patterns of light that are not visible to the naked eye and are displayed on a computer monitor in the form of colours. Positive and negative vibrations in the environment are denoted by certain colours that have been calibrated into the machine. Positive colours denote spiritual vibrations that have sattvikta or spiritual purity, while negative colours denote Raja-Tama predominant vibrations or spiritual impurity. Hence, we can actually measure the increase or decrease in colours between PIP pictures which will tell us the increase or decrease in positive or negative vibrations.

In the picture shown at the side are PIP images of the two gold necklaces. They have been compared to a baseline reading of the environment where the experiment (using PIP) was conducted.

At first, a baseline reading was taken of an empty room with a table where the various necklaces were to be placed one by one.

What is important is that you will notice that the colours in each of the PIP pictures are different. This signifies that there is a different proportion of positive and negative subtle vibrations for each necklace. 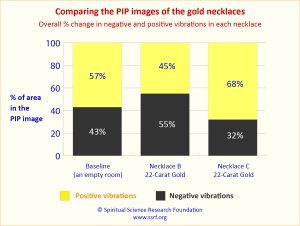 The total area of positive versus negative colours from each PIP picture of each necklace was measured and compared (see stacked column graph above).

The true measure and analysis of subtle vibrations can only be obtained through the medium of sixth sense. We have seekers in our spiritual research team who can actually perceive the vibrations emitted by people and objects. Such seeker-artists are able to perceive what is taking place during an experiment or situation in a visual way and draw pictures of what they see and feel. These are known as pictures based on subtle knowledge. These pictures serve as spiritual X-rays for jewellery design and provide the average person with an unparalleled glimpse into the spiritual dimension about the true nature of such objects.

Below we have provided diagrams of what the three necklaces looked like in the subtle. 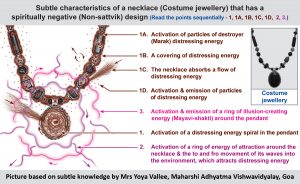 Above is what Necklace A (in the genre of costume jewellery) looks like in the subtle – it is surrounded by distressing energies and illusory vibrations. The pink vibrations seen in both subtle pictures are known as illusion-creating energy or Mayavi energy.

This type of negative vibration is actually quite dangerous because it gives us a false sense that something is good when it is actually not. More importantly, it comes with a lot of distressing vibrations, which an average person is not able to perceive. 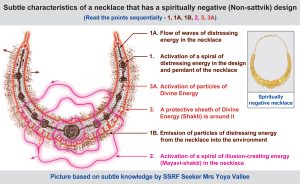 Above is a subtle picture of Necklace B. Even though there is a subtle protective sheath of Divine energy due to the gold, the design of the necklaces gives rise to distressing vibrations, which nullifies the positivity of the gold.

This is an important point – that even though gold as a metal emits positive energy – its positivity can reduce, or it can even emit negative vibrations depending on how it is made. 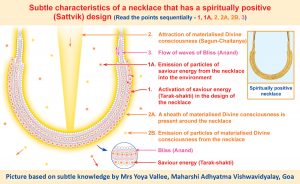 The subtle energies seen around Necklace C were quite extraordinarily positive. The necklace attracted and emitted positive energy. As you can see there is more to appreciating jewellery than meets the eye. Beyond our five senses, there are all these subtle energies in constant motion around the ornament. The aura and energy scanners are able to provide basic subtle information about objects that corroborates with the subtle knowledge received in the subtle pictures.