We are very grateful to God and the Guru Principle for having been witness to these Divine changes in His Holiness Dr. Athavale and to participate in spiritual research with regard to this unique spiritual event.

1. Introduction to Divine changes on the body of His Holiness Dr. Jayant Balaji Athavale 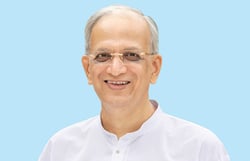 H.H. Dr. Athavale is a Saint and Paratpar Guru at the 94% spiritual level. For a number of decades, He has been working tirelessly to help seekers all over the world in their spiritual journey. The uniqueness of His teachings is that seekers are guided according to the stage they are at in their spiritual journey so that they do spiritual practice as per their capability. By taking seekers to higher and higher levels of spiritual practice many seekers have reached Sainthood under His guidance, which is an unparalleled accomplishment in the spiritual history of mankind.

It has also been our experience that any person diligently putting into practice the spiritual healing remedies recommended by Him have been benefitted. The Spiritual Science Research Foundation (SSRF) too was founded with the blessings of H.H. Dr. Athavale. More information on H.H. Dr. Athavale can be found in the About SSRF section.

2. Divine changes on the body due to spiritual level

The lives of Saints cannot be understood by an average person and it is hence difficult to understand their intricacies. When they progressively reach close to God-realisation, their psychological and intellectual features (due to actual dissolution of the mind and intellect) undergo changes. As a Saint progresses spiritually from 70 to 80 to 90 per cent spiritual level and beyond, Their body gets charged with more and more Divine Consciousness also known as Chaitanya in Sanskrit. A Saint progressively acquires Divine qualities such as love without expectations for all of humanity and expansiveness. Along with the inner changes in qualities, there are changes which can be physically seen on Their bodies too. In other words, Divinity becomes visible on Their physical body in the form of changes as well, and these changes are known as ‘Divine changes’ in the body.

Up to now there has been hardly any study worldwide with regard to such kind of Divine changes in a spiritually evolved person’s body. By studying the changes in His body and the bodies of seekers that have been doing spiritual practice under His Guidance, H.H. Dr. Athavale has documented invaluable spiritual knowledge for generations of seekers to come. After attaining God-realisation, there is nothing left for Him to attain spiritually. Despite this, He is tirelessly continuing His mission of imparting spiritual knowledge through Holy texts for the spiritual welfare of humanity and for seekers to progress spiritually.

3. What is the nature of Divine changes?

This is a verse from the Upanishads (one of the oldest holy texts in the world) that describes how a spiritually evolved person looks like.

“The physical characteristics of a spiritually evolved person are lightness of the body, health, restraint, pleasant skin, melodious voice, fragrance and less urine and excreta are all preliminary signs of a yogic temperament.”

Almost all these signs are found on H.H. Dr. Athavale’s body. The following are some of the changes that have been noticed on or from His body:

Important note to our readers Some people may have actually experienced some of these changes such as their fingernails turning yellow. Such changes should not be misconstrued as Divine changes. It is important to understand that for the vast majority of us, yellow or white nails are caused due to medical reasons and not spiritual causes. Divine bodily changes are a rare phenomenon which take place on the bodies of highly spiritually evolved people.

Over the years, there have been many changes on H.H. Dr. Athavale’s body both due to negative energy attacks and due to a gross manifestation of His Divinity. In this section we will be looking at the changes in the skin, hair, nails and body of H.H. Dr. Athavale and other seekers caused by Divine and demoniacal energies and their underlying spiritual science.

Click on the pictures below to be taken to the relevant section.

In each section we have gone into more details about these changes. To understand the nature of these changes and their subtleties, we took the help of some seekers who get Divine Knowledge from the spiritual realm. The Divine Knowledge which was acquired from different seekers separately not only tallied with each other, but it also tallied with the physical changes that were unfolding on H.H. Dr. Athavale’s body. As a result, we could recognise the accuracy of the Knowledge and the cause-and-effect relationship of the changes across many aspects of His body.

Another reason for these Divine changes in H.H. Dr. Athavale are due to His spiritual mission during the coming adverse times and we will cover this in a sequel article.

We have shared this knowledge to provide society with a deeper understanding of the lives of Saints at the highest spiritual level. As seekers on our spiritual journey, God-realisation is something we aspire to. This kind of study gives us a glimpse into some of the physical changes that a person’s body may undergo as they reach higher levels of Sainthood. We pray that this article section inspires seekers on their spiritual journey to make greater efforts for spiritual growth.