To understand this article please read the article on ‘What are merits and sins?’

1 Introduction to a spiritual perspective on killing

Each year people in Yulin, Guangxi, a region in China, celebrate the Summer Solstice by having a dog eating festival. Here over 10,000 to 15,000 dogs are killed and consumed with lychees and liquor. It attracts intense criticism from animal rights groups and social media. It is widely denounced as cruel and inhumane. Dog meat is also eaten in many other parts of the world. The same people denouncing the killing of dogs for food may well be avid beef-eaters themselves. In the US alone approximately 100,000 cows are killed every day of the year along with over 20 million chickens.

“What makes a dog’s life more valuable than a cow’s or chicken’s life?” argue the people who eat dogs. “After all, they are both animals”, they rationalise.

“A dog is man’s best friend!” would come the quick and incredulous retort from their critics.

With dogs and humans there is a natural emotional bond that develops. On the other hand we do not have an emotional bond with cows, chicken and fish. Does this make it okay to kill them? Every year the human race kills over 150 billion fish, animals and poultry. Non-vegetarians defend their need to eat meat by saying that plants too have life and that vegetarians kill plants. Some non-vegetarians feel that if they eat meat when the animal is ethically killed, it is okay, as opposed to some cultures where animals die a slow death with their throats partially slit.

All life has value. Do we incur sin by killing or being part of the reason why animals are killed? In a world increasingly disturbed by conflict and war where thousands of people are being killed, in this article we share a spiritual perspective on the gravity of sin or demerits incurred by a person killing humans, animals, fish and plants.

2 A spiritual perspective on sin incurred due to killing

2.1 Complexity in deciding the amount of sin incurred from killing another living being

At the outset it is important to understand that it is only possible to give very broad guidelines in relation to this topic. The reason for referring to this information as broad guidelines is because there are thousands of reasons as to why one person may kill another living being. Depending on the reason or intent behind one’s action, the severity of the sin may vary based on the following factors:

As you can see there are a lot of factors that are taken into account when the gravity of sin (or demerit) is decided in God’s court for an act of killing. A normal court of law does not have the tools nor the subtle vision to be able to see the various subtleties when deciding the punishment for murder. In God’s court even if a killer is smart enough to evade the justice system, he cannot evade the universal law of give-and-take or the law of Karma. We are all born with destiny that we have to undergo based on our actions from previous births.

There is another factor that needs to be considered relevant to the times we live in. It is the importance of time or cycle in the Universe. We are currently in an extremely adverse period in the history of humankind. In the years 2012 to 2023, the collective destiny of humankind will have a significant impact on every person that will be over and above their individual destiny. This period of upheaval is because of demerits earned by the human race for leading a way of life that is Raja-Tama predominant and which is taken advantage of by powerful negative energies to bring about Armageddon as mentioned in our article on World War 3 Predictions. The many wars and natural disasters that are taking place around the world is but a reflection of this period. It will finally culminate in World War 3 where a large portion of the world’s population will die.

2.2 Some other concepts in relation to killing

There are a few other aspects that need to be stated in relation to a person killing another life form:

3 Relative weightage of sin incurred depending on who is killed

This table shows the relative gravity of the sin incurred when a person kills another living being. In order to provide a comparative estimate of the sin incurred, in this article only the intent behind the killing and the method of killing have been considered. When we look at the amount of sin incurred from killing another being, the intent behind the action is 70% important, whereas the action is only 30% important. The relative amount of sin incurred (3rd column) which has been expressed as a percentage includes sin from both intent and the act of killing.

Please note all figures given in the table below are an average indicator of sin incurred and can vary by +/- 5% to 10% depending on the type of person, animal or plant being killed.

In the table above, the figures given in column 3 for the act of killing are not linear. This means that each act of killing at one level does not add sin up linearly. For example, killing 10 fish (5 to 7 units of sin X 10) does not amount to a sin greater than killing a seeker (which is 45-55 units). The purpose of this table is to just understand the severity of sin or the quality and not the quantity. 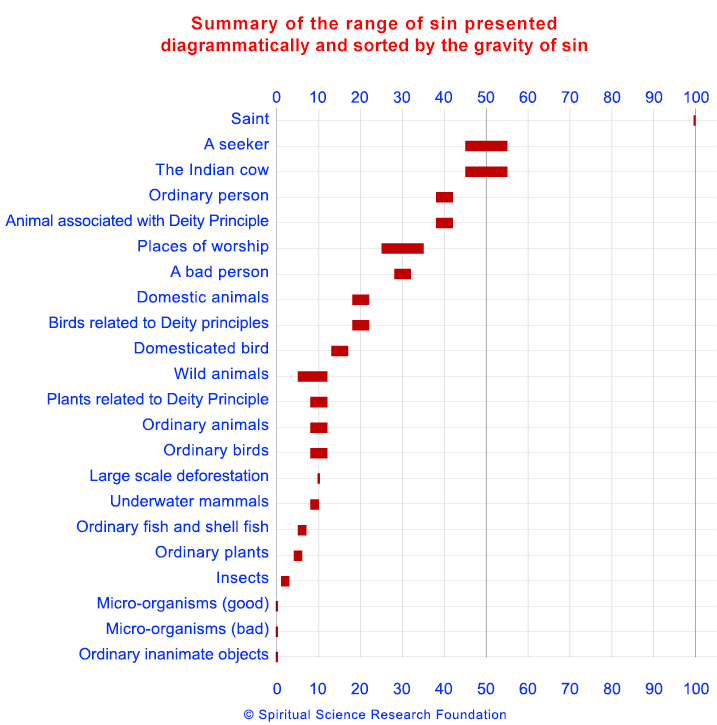 3.1 Some guidelines on how the intent behind killing can affect the sin incurred

As stated earlier, the intention behind killing holds 70% weightage when deciding the severity of the sin incurred. In the following table we show some examples in relation to this.

If a person is possessed by negative energies and commits a crime such as killing another person or animal, the sin incurred from the action will depend more on who was responsible for the thought behind the action; was it the possessing entity or the person or both? Accordingly, the sin incurred will be shared commensurate with who’s consciousness contributed to the event.

The above reasoning is similar to how a person who is mentally challenged or mentally compromised is not given the same punishment as compared to a normal person if they commit the same type of crime.

If the same situation (of total loss of control) involved a seeker (who was possessed and who was making sincere efforts for spiritual growth) the percentage of sin incurred by the seeker would be minimal.

As stated earlier while intent hold 70% importance, the method or way of killing holds 30% importance.

The person killing accrues the full weight of sin from the act of killing if the person or animal is tortured while being killed.

4 Some key summary points with regard to killing and sin