Note to readers: Please study Sattva, Raja and Tama, the three subtle components of the universe to fully understand this article.

1. An introduction to a spiritual perspective on a vegetarian diet vs a meat diet

There is a wide debate as to whether it is better to be a vegetarian or a meat eater. People in either camp have pretty much dug their heels in swearing by the benefits of being a vegetarian or a non-vegetarian respectively. There is, however, a worldwide trend of more and more people crossing over and becoming vegetarians. In this article, we explore the issue from a spiritual perspective.

2. Spiritual purity of a vegetarian diet vs a meat-based diet

Food is no exception and at a subtle level; it too is made up of the Sattva, Raja and Tama subtle components. The proportions of these subtle components vary depending on the type of food, vegetarian or a meat diet. Sattva stands for purity and knowledge while Tama denotes ignorance and inertia. Anything that has a higher Sattva component assists our spiritual journey and anything that is Tama predominant tends to diminish or obstruct our spiritual practice.

Through spiritual research, we obtained readings of the proportion of the subtle-components present in vegetarian vs non-vegetarian food.

As you can see from the above table a vegetarian diet has a much higher proportion of the subtle Sattva component. As a result of the Tama predominance in meat, the act of eating meat is a tāmasik activity and affects one adversely at a spiritual level.

2.1 Drawing based on subtle-knowledge of meat 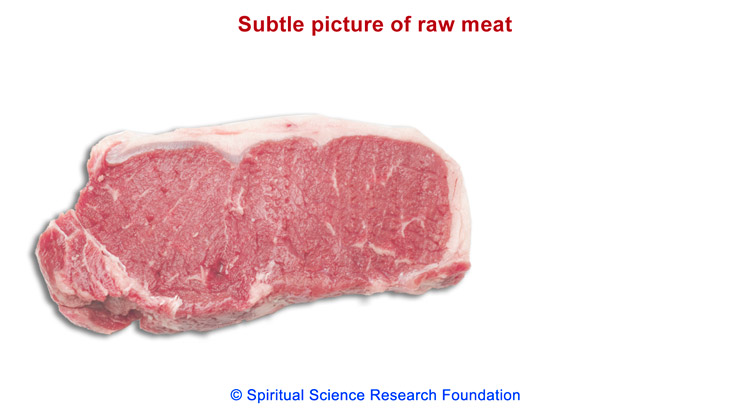 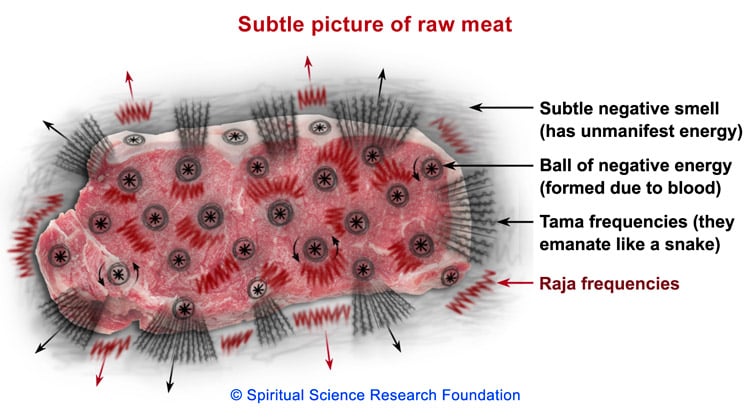 2.2 Drawing based on subtle-knowledge of a banana 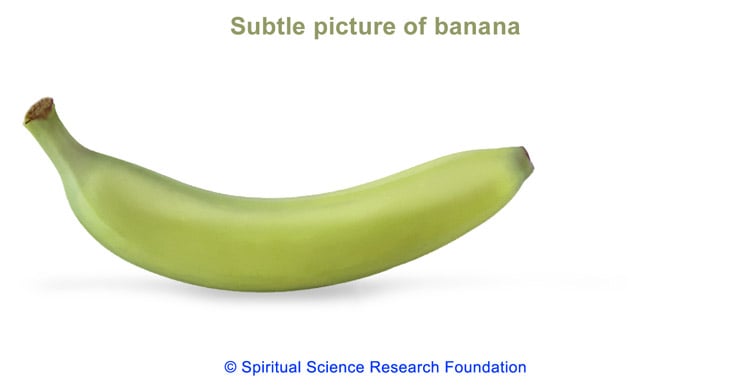 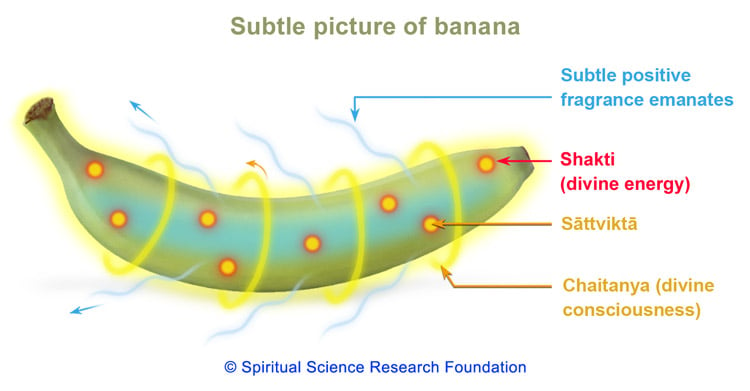 Due to the higher sāttviktā in fruit, it is offered to God in ritualistic worship.

2.3 Effect on meat from the treatment of animals in farm factories

2.3.1 Treatment of animals prior to slaughter

In factory farms around the world, animals are very often treated as commodities just to be exploited for profit. In animal agriculture, this attitude has led to institutionalised animal cruelty, massive environmental destruction and resource depletion, and animal and human health risks. The following is a video from Farm Sanctuary which shows abuse of animals.

From a spiritual perspective it is a sin to ill-treat and slaughter animals. Refer to section 3.3.

2.3.2 Does the method of slaughter have any spiritual impact on the meat? 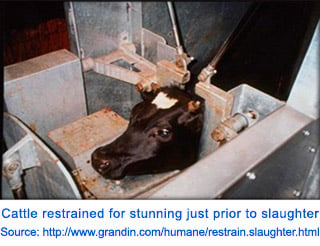 Some customs and religions in the world require that an animal be slaughtered in a particular way else it is not permitted to be eaten by that community. In slaughter houses it is common practice to stun animals with an electric shock or by use of a captive bolt pistol. This renders the animal unconscious prior to the body being hauled down a processing line where the carotid artery and jugular vein are severed with a knife. This action causes the blood to drain out and the animal dies through exsanguination.

In some communities however one of the requirements while slaughtering animals is that the arterial vein be cut without stunning the animal so that the animal bleeds to death. Only then is the meat permitted to be eaten. This bleeding to death can last for up to two minutes. Animal rights groups protest against this method as they say it is cruel and the animal feels a lot of pain. Spokespeople for these communities argue otherwise saying that there is no difference in the level of pain. They maintain that cutting the main arterial vein results in a sudden and quick hemorrhage. Due to a quick loss of blood pressure the brain is instantaneously starved of blood and there is no time to start feeling any pain. (Ref: BBC.com 2003)

When we did spiritual research into this issue we found that:

The paradox is that while these communities slaughter animals in this method so that it is permissible as per their faiths, the spiritual impurity of the meat infact goes up and they ingest higher Tama predominant meat. The following subtle readings obtained through spiritual research indicate the same.

Yes, plants too experience pain when killed or when parts of it are severed. The comprehension of pain however is less than for animals. This is because the mind and intellect of a plant is rudimentary as compared to that of an animal. However, if a fruit or vegetable is plucked when it is fully ripe or has fallen from a tree, there is relatively no pain to the plant.

When grilling meat there are 3 generic ways of cooking it, i.e. rare, medium or well done. Rare is close to raw meat. It has a reddish centre and is cooked on the outside. On the other end is meat that is ‘well done’ that is charred on the outside, thoroughly brown and chewy on the inside.

People who like their steaks rare are more likely to be taken advantage of or possessed by ghosts (demons, devils, negative energies, etc.). This is because meat that is raw is the meat of preference by the demon type of negative energies. Steaks that are well done have less of the Tama subtle component in them as compared to steaks that are cooked ‘rare’ to ‘medium’.

2.6 How long does the effect of the increased Tama component last?

If a person of an average spiritual level were to give up meat eating and become a vegetarian, it would take him approximately 30 years to overcome the effects of the higher subtle Tama component due to ingesting a Tama predominant non vegetarian diet.

2.7 Are canine teeth in humans not meant for consumption of meat?

From a spiritual perspective the purpose of a human birth is to attain God Realisation. The key difference between human beings and animals is that only human beings have developed minds and intellects that can be channeled towards sattvik activities to propel themselves towards God-realisation. Accordingly, it is spiritually recommended that people do not copy what carnivorous animals do and eat.

2.8 A spiritual perspective on eating garlic and onions 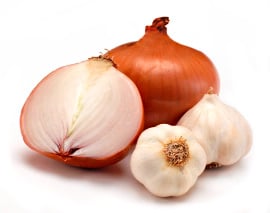 Some communities refrain from having onions and garlic. What is the spiritual perspective on this? Onions and garlic have a higher proportion of the subtle Raja component. It is for this reason, as per the science of Ayurveda, that a diet with garlic and onions is recommended to improve a person’s appetite. The increased Raja component from eating onion and garlic in moderation is very quickly overcome by the increase in Sattva component of a person doing medium (4-5 hours) to intense spiritual practice (10-12 hours).

2.9 A spiritual perspective on milk, curd and cheese

3. Effects of diet on man

By eating a non-vegetarian diet, since there is an increase in Tama component, it is more likely to cause various diseases.

3.2 At a psychological level

The increase in the Tama component from a non-vegetarian diet leads to an increase in thoughts relating to various desires and other tamasik thoughts such as sexual thoughts, greed, anger, etc.

3.3 At a spiritual level

4. Some do’s and don’ts with regard to non vegetarian diet

Spiritual Effects of Food and Drink

Spiritual effects of food and drinks