Note: To understand the background behind this case study and why these phenomena have been taking place, especially to SSRF, please read – An introduction to Horrifying Supernatural Phenomena. 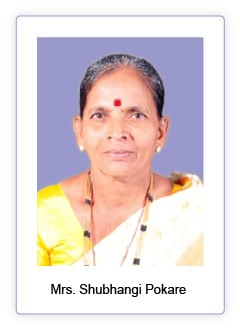 This is a case study about how pictures of Deities and Saints in the altar of a seeker’s residence burned up spontaneously without any rational explanation. This seeker does spiritual practice under the guidance of His Holiness Dr. Athavale.

The following is the description of the events that happened on that day in the words of Mrs. Pokare .

This event happened on the 3rd of March 2004. Throughout the morning I was able to chant the Name of God with concentration and it was going well. However later that afternoon, I began to run a bit of temperature and along with that had a body ache. I felt as if there was a heavy weight on my head. I was repeatedly getting the thought that I was going to die. I began to pray fervently to Shrī Rām. I perceived a lot of black energy covering around my head.

Spiritual Research team’s comment: Quite often seekers feel distress prior to the actual event of spontaneous combustion, as they are sensitive at a sixth sense level to the impending attack.

Later that evening, I began to read the biography of His Holiness Shamrao Maharaj. While reading the book, a point about the reasons why negative energies attack Deities’ pictures caught my eye. And then just that night itself an incident of spontaneous combustion occurred.

When I was sleeping at night, I perceived that a black subtle-form was coming close to me to trouble me. I was very fearful and started chanting the Names of Goddess Durgā and Deity Hanumān aloud. I got up and blew Holy ash (Vibhūti) everywhere in the house and drank water mixed with Holy ash. I looked at the clock and saw that it was midnight and something told me that the strength of the negative energies would now increase. Out of fear, my chanting of the Name of God happened more earnestly and continuously.

I prayed to Goddess Durga and Deity Hanuman for the protection of all of us in the house and started chanting again. I began to experience the presence of Goddess Durga and Deity Hanuman and I felt more secure. But then again, I heard a voice from the negative energies saying, “We will attack you once you are asleep”. I visualised myself sleeping on the lap of Goddess Durga. Just before falling asleep, I saw a bit of smoke but I did not pay much attention to it.

The next morning at around 7.30 am, I went to pay obeisance at the altar and I found that our wooden temple at home was burned in the centre. 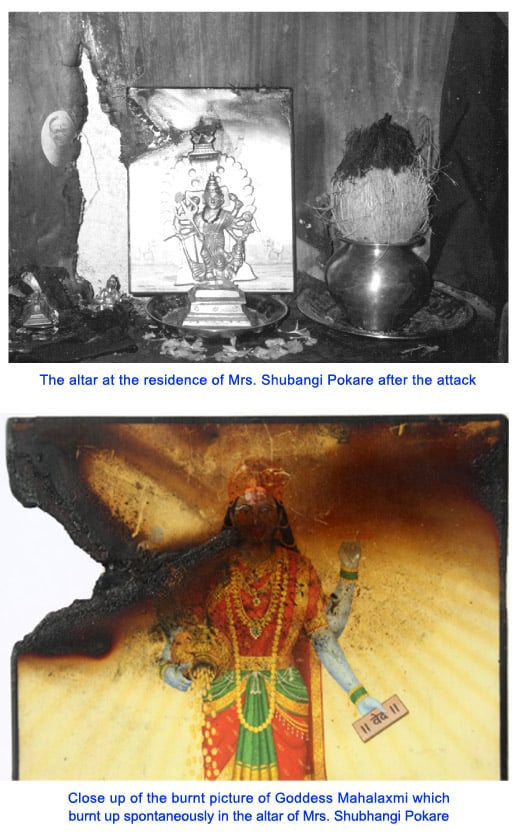 Borders containing Shri Krushṇa’s principle have been drawn around this article so that readers do not feel distressed while looking at the photographs or reading the information given above.

The picture of Goddess Mahālakshmī in the altar (which was drawn by seekers with advanced sixth sense under the guidance of H. H. Dr. Athavale) was burned at one side and the coconut that was kept on the metal pot was also burned. However, the picture of H.H. Dr. Athavale kept next to the picture of Goddess Mahalakshmi in the temple was intact. The nature of the burn was like there had been an explosion in the altar, however I saw no rational explanation how this could have happened. We would generally do collective chanting in this room every day, but after the incident I did not feel like doing so. I experienced increase in pressure on my head near the temple and began to feel really irritable.