2. The process and importance of receiving Divine Knowledge 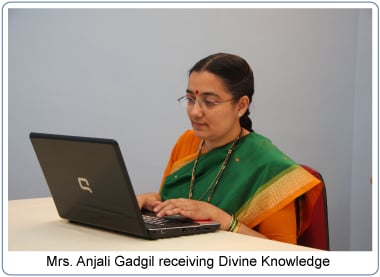 Since the year 2003, tens of thousands of A4 size printed pages of Divine Knowledge have been received by these seekers on various topics. Among other things, their satsēvā of receiving Divine Knowledge has helped research and present many of the topics published on SSRF’s website.

Mrs. Anjali Gadgil is one of the seekers who receives Divine Knowledge. The process occurs as follows. She sits at the computer, prays and then the flow of Divine Knowledge begins and she starts to feed the information into the computer. Given this, her laptop and mouse become important tools for serving God.

One afternoon in 2006, as she was receiving Divine Knowledge, all of a sudden Mrs. Gadgil observed that scratches had appeared on her computer mouse. There was no apparent reason for this occurrence. She was sure that her mouse had been stored safely and that she had looked after it well. The mouse had not come in touch with any object which could have caused the scratches, and nobody else had used it, yet it was scratched from all sides.

Mrs. Gadgil did not feel anything at that time, but she later recollected that she had been so engrossed in her satseva a few days prior, that she had not paid any attention to the heaviness and stiffness she experienced at a physical level. Her eyes had also been paining and her head had felt quite heavy, but she had continued typing out the Divine Knowledge she was receiving.

Spiritual research team’s note: Negative energies try to create maximum obstacles in the process of obtaining Divine Knowledge. Due to such obstacles, seekers involved in this satseva continually experience various types of distress to a greater or lesser degree. As part of their spiritual practice and for the benefit of society, they endure this distress and continue with their satseva of obtaining Divine Knowledge.

As she has advanced sixth sense, Mrs. Gadgil perceived that it was a negative energy who had caused the scratches on her computer mouse. The intention was to impede the process of receiving Divine Knowledge and cause distress to her.

Spiritual research team’s note: When negative energies attack a person they often create a black covering around the person’s mind and intellect. Due to this black covering, the person is unable to realise the real cause of the distress (such as body ache, thought blocks, confusion, etc.) they are experiencing. This prevents them from promptly taking up appropriate spiritual healing measures and prolongs the effect of the distress. Thus the speed, intensity or efficiency of their daily activities and spiritual practice may slow down and the person suffers a loss.