To see all articles in this series – click here.

Sanskrit is the primary language of Hinduism for Sacred texts. It is the language that Sacred texts like the Vedas, Upanishads, Puranas, Ramayana, Mahabharata and Bhagawad Geeta were originally written in. These Sacred texts represent the rich spiritual heritage of India. Over the course of time, these Sacred texts have been translated into many languages and are therefore accessed by people from all over the world. When any Sacred literary work gets translated there is a possibility that the translated work does not have the same impact as the original work. As of Sep 2016, the Maharshi University of Spirituality has been privy to the process of translation of close to 300 Holy Texts compiled by His Holiness Dr Athavale into over 15 languages.  We have observed many obstacles in the translation process, the main two of which are:

Out of the above two points, the second one is lesser known.

Why did the Sages of ancient Bharat choose to write Holy texts in Sanskrit ?

Each language is different in relation to the sound / pronunciation of the words that represent objects and concepts. Though there are some generic scripts like Latin, Chinese, Arabic, Devanagari, Cyrillic, etc., the various language scripts within each generic script are different and differ in their form and usage. Does the relationship between phonetics and script make a difference in advancing the positive vibrations of a language ?

At the Maharshi University of Spirituality and the Spiritual Science Research Foundation, apart from the spiritual research that has been conducted using advanced sixth sense, we have also carried out extensive research on Sanskrit as a language with the help of bio-feedback instruments. In this study, we have used such instruments to conduct a number of experiments to test the hypothesis that:

Sanskrit is a language best suited for Sacred texts and that it has a positive impact on people at a visual and auditory level and more importantly at a spiritual level.

We used biofeedback instruments to test the hypothesis that Sanskrit is a language best suited for Sacred texts and that it has a positive impact on people at a visual and auditory level and more importantly at a spiritual level. In this paper, we present the research work carried out via one such instrument known as Polycontrast Interference Photography (PIP) and have provided a short description of the instrument below. We have provided more information about the colours as coded by the developer of this technology in the article on PIP technology.

Each instrument has its own methodology of use and we take special care to abide by such procedures while conducting experiments. 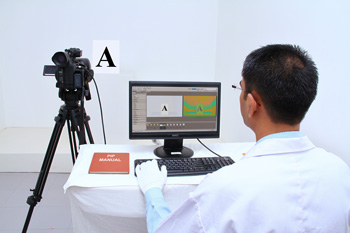 Efforts to study the energy field (aura) around objects or people with the help of machines or specific techniques have been going on for the past many decades. Building on the technology used in Kirlian photography, Harry Oldfield, a scientist and an inventor researched the same technique and presented it in a new and easily usable format. This is known as ‘Polycontrast Interference Photography’, that is, PIP. Among the various energy field testing methods, PIP is known as an effective method. PIP technology involves an energy field video imaging process. This new, experimental technology reveals patterns of light that are not visible to the naked eye. Harry Oldfield believed that the future of diagnosis of medical ailments lay in finding an effective scanner that can see imbalances in the energy field rather than just disease in the physical body. He calibrated the machine to display various colours. Each of these colours were given a particular meaning and are used to represent positive vibrations and areas of disturbances in the bio-field/energy field. The instrument has gained a lot of popularity with researchers trying to understand how a person’s bio-field can be a tell-tale sign of their future health.

2.2 Other aspects with regard to methodology