To test when a Holy text (such as the Bhagawad Geeta) is translated into other languages (from its original language which is Sanskrit) if there is any difference in the vibrations emitted by the text.

A) Baseline reading of a blank white paper

At first, we placed the blank white paper on a wooden board to get a baseline reading of the paper without any text. The following is the image generated by the PIP. Each of the colours have a meaning as shown below. The colours on the object and table were not taken into consideration as the PIP instrument primarily measures the energy field around an object or person.

B) Vibrations emitted from the translated verse in English

In the picture below, we had removed the blank paper and replaced it with the paper where the Sanskrit verse from the Bhagawad Geeta had been translated into English. (It is standard operating procedure that between each reading/change in text, we allow the environment to stabilise before putting the next sample for a reading. This helps to ensure that there is no overlap in readings due to any object.)

As you can see, there is an increase in the sandy brown colour which represents negativity. The sandy brown colour has expanded into the yellow area thus reducing the amount of yellow and hence the Divine conciousness (Chaitanya), which are positive vibrations in the environment.

C) Vibrations emitted from the translated verse in Hindi

In the picture below, the Hindi translated version of the Sanskrit verse has been placed. (Reference of translation – Gitarthbodhini, Publisher – Rauji Shridhar Gondhalekar, Pune, 3 September 1881, Page 2.)

As you can see, there is a reduction in the sandy brown colour which represents negativity in the environment. The yellow colour has increased which represents Divine consciousness. Also we now see a silver colour emerging in the energy field around the verse in Hindi signifying spiritual purity.

D) Vibrations emitted from the translated verse in Marathi

In the picture below, we have now placed the paper where the Sanskrit verse from the Bhagawad Geeta had been translated into Marathi. (Reference of translation – Shri Vaman Pandit, as mentioned in the book Gitarthbodhini, Publisher – Rauji Shridhar Gondhalekar, Pune, 3 September 1881, Page 2.)

As you can see there is a further reduction in the sandy brown colour which represents negativity in the environment. The yellow colour area which represents Divine consciousness has remained somewhat steady. However, the silver colour signifying spiritual purity has increased significantly.

Note: Lime green (healing at a subtle level) has started to appear at the top of the picture.

E) Vibrations emitted from the original verse in Sanskrit

Lastly we placed the original Sanskrit verse. Here we can see a further increase in the silver colour along with a lime green colour on top. Lime green signifies a higher level of healing energy which is more subtle.

The translated verses in the Devanagari script languages had a higher proportion of positive vibrations as compared to the baseline reading and the Latin script. 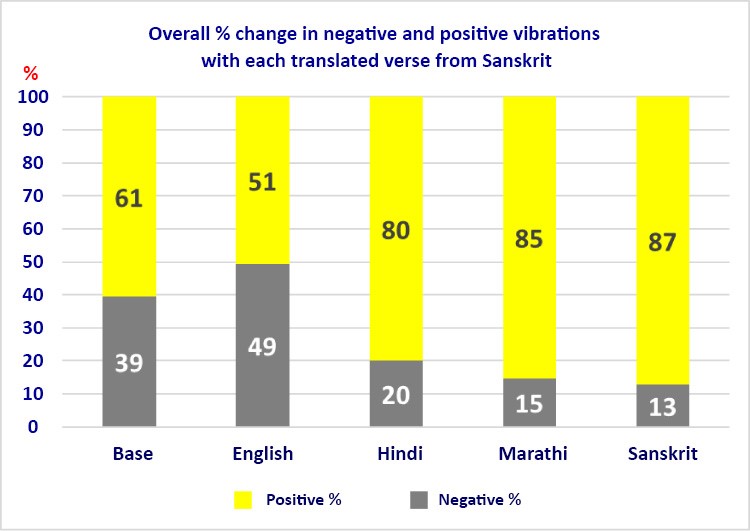 For this we looked at the detailed changes in proportion of colour (given below). 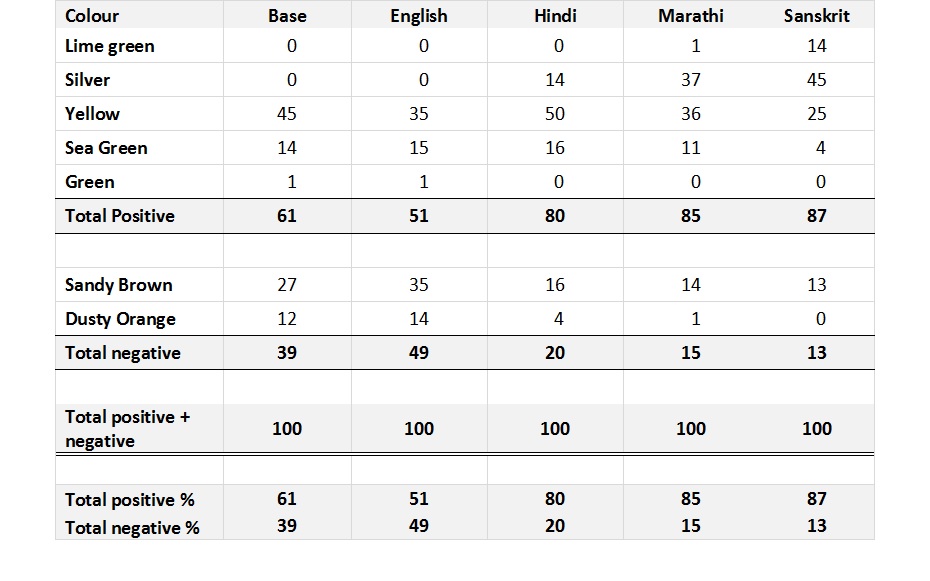 From the above chart there were nuances in the positive vibrations at a higher positive level. In the following chart, we focus only on Lime green (which signifies healing at the subtle level) and Silver (which signifies spiritual purity) and we see a significant change in both these colours with each language of the Devanagari script. Sanskrit is seen to have a higher percentage of the colours with the highest vibrations of positivity. 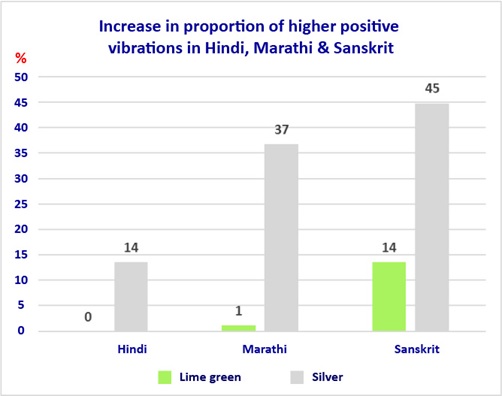