The next lunar eclipse is on 7-8th November, 2022. Did you know that solar and lunar eclipses have harmful spiritual side effects ? This article elucidates about the negative effects eclipses can have on you and your loved ones and what you can do for your protection.

Abstract : Solar and lunar eclipses are significant events at a spiritual level. There is an increase in Raja-Tama which has negative effects on humanity. Ghosts take advantage of the heightened Raja-Tama to create a variety of issues that have global negative repercussions. Regular spiritual practice ensures that we are insulated from its subtle (intangible) harmful effects.

Please note : To understand this article you need to be familiar with the article on Sattva, Raja and Tama – the three subtle basic components of the Universe.

You can watch a video summarising the spiritual meaning of an eclipse here:

Every year we witness a number of solar and lunar eclipses that are either partial or total. The visibility of any given eclipse is usually limited to some geographic area on Earth. Viewing an eclipse generates much interest in the wider community and this prompted us to also understand if there is a spiritual or subtle intangible significance to it. We conducted spiritual research to understand the spiritual meaning and the effect of eclipses on mankind.

The first thing that came to light through spiritual research is that physical (apparent to our eyes) eclipses as mentioned above are not the only type of eclipses. There are subtle (intangible) eclipses too. These subtle eclipses are caused by the powerful ghosts (demons, devils, negative energies, etc.) called subtle-sorcerers (māntriks) from the 5th to 7th region of hell by the use of their supernatural powers and are only apparent to those with an advanced and active sixth sense.

Every heavenly body that we can see such as the Earth or Sun also has a subtle body. This is akin to the subtle body that a human has that envelops the physical body. Refer to the section on subtle body and what we are comprised of.

There are subtle eclipses on the moon too but their impact on the Universe is much less as compared to that of the solar eclipse.

By creating a barrier between the Sun and the Earth in a subtle eclipse, powerful subtle-sorcerers interfere with the function of the Sun and hence increase the Raja-Tama on Earth.

The negative impact of a subtle eclipse on humankind is 9 times more powerful than that of a normal physical solar or lunar eclipse.

3. Spiritual significance and meaning of a Solar or Lunar eclipse

Spiritual research has shown that in the case of all eclipses there is a rise in the Raja-Tama and a reduction in the Sattva component. This rise in Raja-Tama has many detrimental side-effects at a subtle (intangible) level which may not be noticeable in the physical plane initially. However these Raja-Tama laden conditions are made use of by ghosts to harm society.

Due to the Sun being obscured by a subtle barrier in front of the gross or subtle Sun during an eclipse, there are two significant spiritual impacts:

3.1 Why is there an increase in Raja-Tama with a solar or lunar eclipse?

The increased Raja-Tama happens due to two reasons:

3.2 Why do solar eclipses cause more Raja-Tama?

The Sun is far more important to life on Earth than the Moon. By obstructing it at a subtle or physical level, the environment on Earth becomes far more vulnerable at a subtle intangible level and thereby more conducive for ghosts (demons, devils, negative energies, etc.)

3.3 What is the relative increase in Raja-Tama from an eclipse?

The following table gives the difference in the proportion of the three subtle basic components on average in the current era of the Universe (i.e. Kaliyug) and in the event of an eclipse. The figures are indicative of Raja-Tama generated in event of a partial eclipse of 30% severity and which occurs at a physical level.

In the case of subtle eclipses the Raja-Tama will be about 5% more.

3.4 How long does the effect of the increased Raja-Tama from a solar or lunar eclipse last?

The Raja-Tama increase during an eclipse has a residual effect that subsides over many months. In the chart below, we have shown how long the excess Raja-Tama generated by a partial eclipse of 30% takes to subside.

4. Repercussions of a solar or lunar eclipse

4.1 Where is the subtle impact of the eclipse maximum?

The maximum subtle impact of an eclipse on humans depends on where it is most visible. The more visible it is, the greater the subtle impact on people in that region.

Thus if an eclipse were to be most visible in the middle of the Pacific Ocean, it would have least subtle impact as it is a minimally populated area.

During an eclipse period, the power of distressing energies increases by 1000 times as compared to other times. This is because ghosts harness the excess Raja-Tama generated by the eclipse to amass black energy either by utilising the conditions to do more spiritual practice to gain negative spiritual black energy or by stealing the spiritual energy of seekers of God. Black energy is spiritual energy which is used to harm society. The following is a drawing based on subtle-knowledge that shows how black energy is collected. 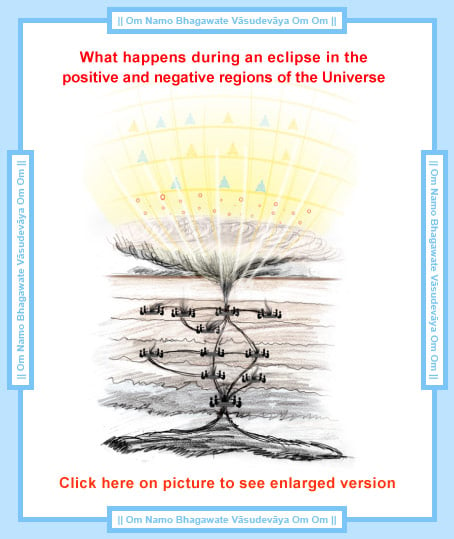 Refer to the section on ‘why we have protective borders’.

The above subtle vision explains what happens at a subtle intangible level during an eclipse. In the subtle negative regions of Hell (Pātāl), higher order ghosts (demons, devils, negative energies etc.) called subtle-sorcerers (i.e. from the 2nd region of Hell downwards) make use of the increased Raja-Tama during the eclipse to do spiritual practice like sacrificial fires (yadnyas) or meditation to harness spiritual black energy. The black energy generated by various subtle-sorcerers flows towards the 7th region of Hell where it is stored. These flows of black energy are all interconnected.

In the subtle positive regions, the subtle bodies of Sages are engaged in meditation. Divine consciousness (Chaitanya) flows from the higher positive regions to combat the increased Raja-Tama on Earth. Thus a subtle battle between the forces of good and evil ensues on the Earth plane.

4.3 Impact of Solar and Lunar eclipses at an individual level

Refer to the article on ‘Why would my departed ancestors want to trouble me?’

It is for this reason people may experience lethargy, tiredness, sickness etc. at a physical level. At the psychological level, there are excess emotional and negative thoughts, especially about spiritual practice. The moon is known to affect the mind. During a full moon, the effect is even more pronounced. This is further accentuated when there is a lunar eclipse. Thus the combination of the full moon and lunar eclipse is severe. However it happens at a subtle intangible level, i.e. people suffer distress by negative energies.

There is a general decline in decision-making capacity and people are more likely to make incorrect decisions as the intellect is also affected.

4.4 Impact of eclipses at the level of humankind

As mentioned earlier, ghosts use the excess Raja-Tama generated from an eclipse to collect black energy. They use this black energy to harm humankind in various ways. They do this by sowing seeds of destruction and harm at a subtle intangible level that only manifest in the physical plane after a gestation period. This gestation period can be anywhere from a few days to several years. Examples of this would be sowing seeds of pandemics of contagious diseases like Bird Flu and the Ebola Virus or sowing seeds of the third World War.

Eclipses contribute in a large way by providing circumstances conducive to amassing the black energy that ghosts have. In our article on World War 3 Predictions, we mentioned that the world will go through a World War and major natural disasters between the years 2018 and 2023. It will be accompanied by an unprecedented loss of human life. The main catalyst at a subtle intangible level for World War III will be higher-level ghosts. They will orchestrate these events through their black energy influencing man to wage war against his fellowmen. Up to 30% of all their black energy will be gathered at the time of eclipses. The following table shows a breakdown of the factors that will help make the environment conducive for ghosts to create their black energy.

5. Practical do’s and don’ts to counteract or minimise the negative effect of an eclipse

During an eclipse there is a heightened amount of black energy flowing around and hence an excess of Raja-Tama. Even if we do not have the sixth sense to perceive it, it is best that we modify our actions during an eclipse to counteract the subtle (intangible) harmful effects.

Natural disasters and Eclipse: Earthquakes, floods, epidemics, famines, etc. take place when the collective sin increases, to punish the ones responsible (for the increase in sin) and the ones who do not take any measures to overcome the situation. These disasters come suddenly. As a result one does not get the time to think of saving oneself from such disasters. On the contrary, for known events such as an eclipse we can save ourselves from its ill-effects by doing spiritual practice. For this it is necessary that during the period of the eclipse (i.e., from the start to end of the eclipse) one should do spiritual practice.

Accordingly, people who make the effort to do intense spiritual practice during the time of an eclipse will benefit up to 30 % more spiritually.

The amount of time one should avoid meals during an eclipse:

If during moonrise, the moon is going to be eclipsed then one should not have food in the previous 12 hours. So also, if the sunrise is going to be in a state of eclipse (irrespective of the type of eclipse), then the period of fasting should start 12 hours earlier. This is because various subtle processes are set into motion approximately 12 hours before an eclipse. If the sun or moon sets in a state of eclipse, then one should have meals only on the next day after taking a bath. Small children, elderly and ill people can observe this period for just 4 and 1/2 hours.

Causes of problem in life 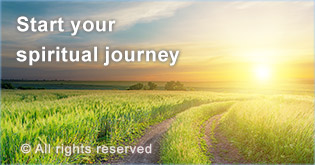 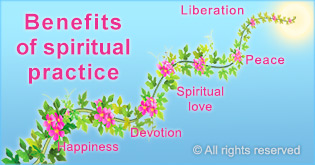