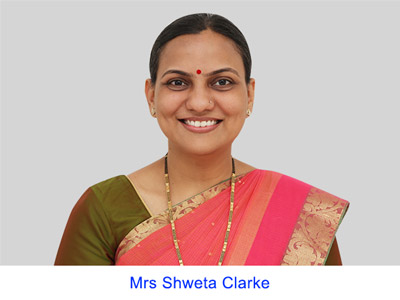 Due to God’s grace I had a very strong spiritual experience related to Shrāddha (a potent ritual that benefits departed ancestors at a spiritual level). I had just gotten married to Sean Clarke, and it was our first Pitrupaksha (a fortnight when departed ancestors come closest to Earth) period after marriage. Sean and I were in Melbourne, Australia during that time. In 2012 the dates for Pitrupaksha were from 30th September to 15th October. We were both doing spiritual practice under the guidance of SSRF and we understandood the importance of chanting Shrī Gurudev Datta and how this Pitrupaksha period is so important for departed ancestors. Also, there was a growing feeling within me that we should do everything possible for our departed ancestors so they can gain momentum and move on.

In my parental home, Shraddha is done every year by my brothers, but on Sean’s side of the family the ritual was never done. As Pitrupaksha was approaching, I was getting thoughts that maybe our departed ancestors are stuck and in pain and there was intense desire to do something for them. However, as we were in Melbourne and the Shraddha ritual is not commonly practiced there, I did not know whom to contact. I was praying intensely to Deity Dattatreya (the aspect of God Who gives momentum to departed ancestors in the afterlife) that You only help us. I started reading the Holy text of SSRF – ‘Shraddha’ and tried to gain information about what could be done when one is unable to perform Shraddha in its full form.

Through the Holy text, we got information about many simple steps which can be performed that give spiritual benefit and go a long way in helping departed ancestors. Sean and I decided to do the steps as sincerely as possible. As the Pitrupaksha started Sean and I experienced a lot of spiritual emotion and calmness within. We felt the presence of Deity Dattatreya all along. There was a lot of gratitude about how despite us not being able to do much how the benevolent Deity Dattatreya still comes to help and gets appeased even with such simple efforts.

On 1st Oct (the first day of Pitrupaksha that year) we got up early in the morning and had a shower. Then we lit a ghee (clarified butter) lamp at the altar at home. Sean and I prayed to Deity Dattatreya ardently to help our departed ancestors, to remove all ancestral distress and to help us in our spiritual practice. Sean continued to do some ‘Shri Gurudev Datta’ chanting while seated. Then he performed ritualistic offering of water (Known as Pitrutarpan). To do that Sean faced the South direction, and with a copper spoon in his left hand he slowly poured water on his right palm. He did this in a way so that the water flowed between the thumb and index finger of the right palm onto a copper plate. During the entire ritual, both of us kept chanting Shri Gurudev Datta.

Then, in the temple room, both of us faced the South direction, raised our hands up in the air (to denote surrender) and prayed to the Deities: Vasu, Aditya, Rudra, Vaishva Dev and Dattatreya, “We are helpless. Please give momentum to our departed ancestors.”

Next, I cooked some rice and mixed it with ghee and black sesame seeds. I made 7-8 rice balls from the mixture and placed them on a plate. Then we took the plate outside the house to the pavement beside the road. We placed the rice balls on a tuft of grass and prayed to Deity Dattatreya as follows, “Through this food please You only help our ancestors to get satiated and move on. We only have this offering. We humbly offer this to You. Please You only accept this offering and bless our ancestors.”

As per the spiritual science, if crows come and peck at the food after it is offered it shows that ancestors received the offering.

We were staying in a neighbourhood that did not have many crows. After making the offering we left the result to God and Sean left for work. I continued to stay there for 5 minutes and stopped to pray. To my surprise, within 5 minutes about 35 to 40 big crows came and finished eating the offering. I was so awe struck by the grace of God that I had tears of gratitude and I did not know how to express it. I just stood there and paid namaskār and obeisance to the departed ancestors who had come in the form of crows and gotten satisfied with the offering. Even after the rice was eaten completely, the crows did not leave. They sat on nearby trees for a long time and some of them nodded in satisfaction. I felt that departed ancestors were expressing gratitude through them for the relief they felt from their suffering in the afterlife.

We offer immense gratitude to His Holiness Dr Athavale for giving us the spiritual science which emphasizes the importance of performing the Shraddha ritual and for giving us the capacity, will and spiritual emotion (bhāv) for getting it done through us.

2. Experiencing the benefit of the Shraddha ritual in its full form at the Spiritual Research Centre and Ashram, Goa, India

We made all preparations needed for the rites. On the day of the actual Shraddha ritual, I got up very early as I had to have a shower and prepare food. I was cooking in the bakery in the Spiritual Research Centre and Ashram, which is quite remote and no bird can enter the bakery. At about 5 am I offered a prayer to Deity Dattatreya and started getting all the ingredients needed to begin cooking. To my surprise a big crow came from nowhere. He came inside and sat there peacefully. I was very surprised as earlier we had done the satsēvā of cooking in the bakery many times but no crow or bird had ever come inside. I paid obeisance to the crow as I felt that Sean’s late grandfather had come in the form of the crow. I felt he had come to acknowledge and express his gratitude for the ritual being performed for the ancestors. He did not touch the food or make any noise. He was extremely calm and just sitting there for a long time as I went about preparing the food. I did not tell Sean about this experience at the time.

Thereafter the Shraddha ritual started. Sean was performing the steps of Shraddha as directed by priest seekers. When Sean started the ritual, he heard crows in the background. He got a strong thought that his late grandfather had come for the ritual and he was calling all other departed ancestors also. Throughout the ritual we felt the strong presence of Deity Dattatreya.

The ritual was completed and later Sean and I were sharing our spiritual experiences. It was then that we shared with each other that we felt that Sean’s late grandfather had come to the ritual.

Editor’s note : When two seekers have the same thought then it is true.

Another interesting observation we had was that ever since Pitrupaksha started, the number of crows around the ashram increased. The Shraddha ritual was being performed every day at the ashram. In the evening, all the crows would be sitting on the electric wire outside the ashram. We have never seen so many crows sitting on the line at one time. This has happened in later years also and only during Pitrupaksha.