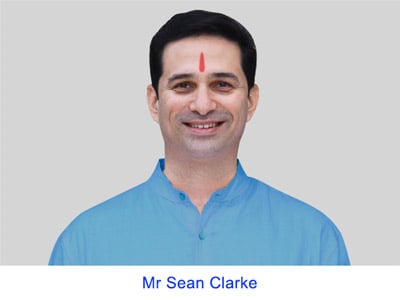 In April 2002, just before I was about to leave the ashram in Goa, I was able to meet with His Holiness Dr Athavale. At that time, even though it was alien to the culture that I came from, I had an urge to bow down in disciple position and put my forehead to His feet. Usually His Holiness Dr Athavale does not allow seekers to stand on ceremony (i.e., observe ritualistic formalities) in relation to him. Yet on this occasion He allowed me to do so. He was standing as I bent forward to touch my forehead to His toe. As soon as I touched His feet with my forehead, I felt a ripple of energy go into my Adnya chakra and then along my spine in an undulating wave-like manner.  It was very prominent and tangible. After that for the next 2-3 hours my head felt heavy. Later I learned that it was subtle positive energy that I had felt. Due to its intensity, I was not able to tolerate it and hence my head felt heavy.

Editor’s note : The feet of a Saint emit the maximum amount of spiritual energy. Spiritual energy travels down the Sushumnanadi, which is the central channel of the Kundalini system. Very often, excessive amounts of positive energy can manifest as heaviness in the head and even a feeling of sleepiness due to one going into a meditative state. This is very different to the same kind of symptoms being usually experienced due to negative energy distress.

2. Teaching through dreams and understanding my state of mind

I became a full-time seeker of sorts in February 2005 – though at that time, I was still working part-time, most of my daily focus and time was dedicated to spiritual practice and satseva. By August 2005, I gave up even the part-time job that I had and earnestly started the satseva for the preparation of the launch of the SSRF website. I was staying in Melbourne, Australia at that time. My basic nature was such that I had a lot of faith in my bank account. Living in Melbourne the expenses were quite a lot every month and I would see my bank balance dwindling as there was now no income. Sometimes I would get into a panic with thoughts like ‘what am I doing?’, ‘how will I survive?’, ‘my money is walking out of the door’ etc. When such thoughts would consume me, I would really wonder what was going to happen in the future and there would be considerable fear attached to these thoughts.

Then one night, I had an experience that changed my outlook towards the situation. I am not sure if I was dreaming or in a waking state but I felt a voice tell me, “See Sean in worldly life when you go to work, your worldly boss gives you a salary at the end of the month. So, if you are working for Guru or God who looks after the entire Universe (both subtle and gross), then do you not think He will take care of you?”

The thought was so strong, that it went deep inside me. From that moment, my fear about my expenses disappeared. Guru gave me an elevated viewpoint and a different level of comfort about not having any money, which I had never experienced before.

Later in Dec 2006, I came to India. Though I did not know it at that time, it was to stay in the Ashram for good. By that time, I had hardly any money in my bank account as I had stopped working full-time for almost 2 years. Even though I did not know how I was going to pay my bills in Australia there was no fear as the effect of that guidance in a semi-waking state was still strong within me. I had never mentioned any of my fears or the dream to His Holiness Dr Athavale.

Editor’s note : One important learning that needs to be imbibed in a seeker’s spiritual journey is to rely on God as opposed to one’s own means, which can include one’s bank account, job, family, worldly connections etc. The Guru principle through various life situations teaches the student to transcend their attachment and confidence in such tangible means of support.

3. Unique analytical abilities due to access to Divine Knowledge

Whenever we have gone to His Holiness Dr Athavale to review something, He always does so in the shortest possible time and sometimes even tells us where we should rework our study/research.

One such incident was when Mr Yogesh Shinde and I were working on analysing the lighting grid in the studio and how much wiring would be required for it. In this case, I had not gone into depth in analysing the requirements. I thought a brief study was enough. Later when we showed the technical diagram of the lighting grid to His Holiness Dr Athavale, He gave it a passing glance and then He very quickly told us to check one section again.

Such kinds of things have happened a number of times where His Holiness Dr Athavale is able to accurately pinpoint things at a worldly level and at a spiritual level like when someone’s spiritual practice is going or not going well. This is even though He has not seen that person for a while.

Editor’s note : Saints of a higher spiritual level have full access to the Universal Mind and Intellect and hence are able to analyse, diagnose and reach definitive conclusions about various problems and situations more rapidly and accurately. Due to this, They are able to guide seekers accurately in their spiritual practice. This is one of the reasons why His Holiness Dr Athavale has been instrumental in guiding the spiritual research team at the Spiritual Research Centre and Ashram, Goa, India.