In this article we provide an overview of how prayer works and how to pray. There are two types of prayers – for worldly benefit and for spiritual growth. Accordingly, the prayers are answered by a different aspect of God. Spiritual research has shown that even negative energies can answer prayers, to our detriment! One’s spiritual level is the single most important factor in ensuring that one’s prayers are answered. Praying for world peace, while a noble thought, is most likely not to be answered due to the lack of spiritual level of the people praying. Paradoxically, the people who can really effect change through a single prayer are Saints, but They see the futility of praying as They are totally in alignment with God’s will and do not see it as separate from Their own. Lastly, the posture of prayer also contributes to the prayer being answered.

1. Introduction to the mechanism of prayer

When faced with difficult or insurmountable situations in day-to-day life, like the loss of a valuable, an incurable illness, a major financial problem, etc., people pray to God or to an aspect of Him, also known as a deity. These are prayers with material or worldly expectations.

This article explains the mechanism of how both varieties of prayers are answered.

2. How are prayers answered? What is the mechanism?

2.1 Who answers our prayers? 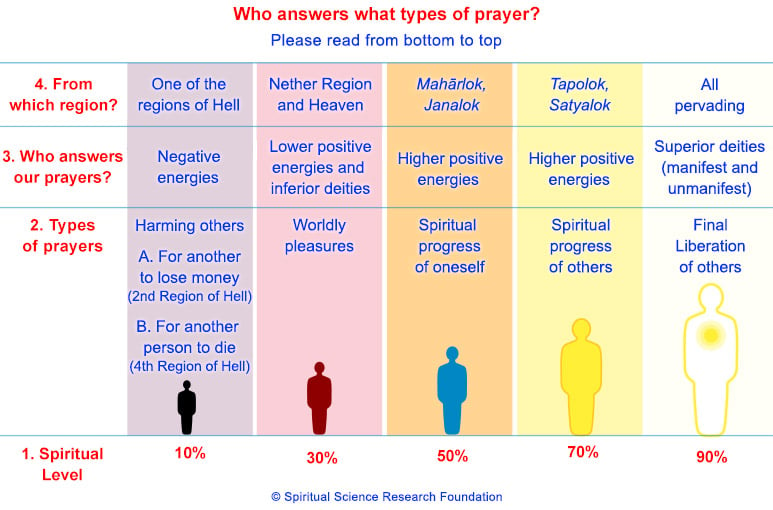 2.2 How are prayers answered?

3. When do our prayers work?

In our life, 65% of events happen as per destiny. Destined events are those events that we have no control over. Please refer to the article on destiny and wilful action.

Destined events, both good and bad, are bound to happen in our lives. Bad destined events may be an illness or a bad marriage. The average person mainly prays to God when bad events happen in their life. They pray to God to relieve the bad event. However, we find that our prayers are not always answered. Refer to the article: Destiny as a spiritual root cause of difficulties in life.

So what is the law? When does prayer override a bad destined event so that with the prayer, the event itself does not happen or at least we are insulated from it?

The rule of thumb is:

4. What decides the effectiveness of one’s prayer?

The following factors add to the effectiveness of the prayer:

4.1 The spiritual level of a person and prayer

The spiritual level of a person praying is one of the main criteria in deciding the effectiveness of the prayer.

Refer to the article on ‘Breakdown of world’s population by spiritual level’.

From time to time, we hear a call by some people to gather and pray for world peace, or for a noble cause such as reduction in global warming. From the perspective of actual results, this is at best a psychological effort. This is so because major world events have a strong spiritual basis and can only be overcome by spiritual efforts of highly evolved beings such as Saints of a higher order. Even if millions of people (of average spiritual level) get together and make the same prayer for a major world happening, it is akin to many ants trying to lift a boulder.

Note: Some people may think that if Saints can effect global change, then why don’t they orchestrate world peace or a reduction in global warming? The paradox is that while Saints have the spiritual strength to influence world events, they have the spiritual emotion that God only knows best. Also, as they are in the ‘observer state’ (sakshibhāv), by their very nature do not interfere in God’s plan and are in complete accordance with His plan. They have the complete awareness that as per God’s plan, everything happens according to individual and collective destiny. (Destined events are those events in our life which happen due to our past actions, either in this very birth or in our previous births.)

5. What is the best posture for prayer and how to pray?

Through spiritual research, SSRF has identified and recommends the following mudra, or posture, that is most conducive to gain the maximum divine energy through prayer.

The following drawings based on subtle-knowledge show the two stages in this mudra and what actually happens at a spiritual level when one prays. 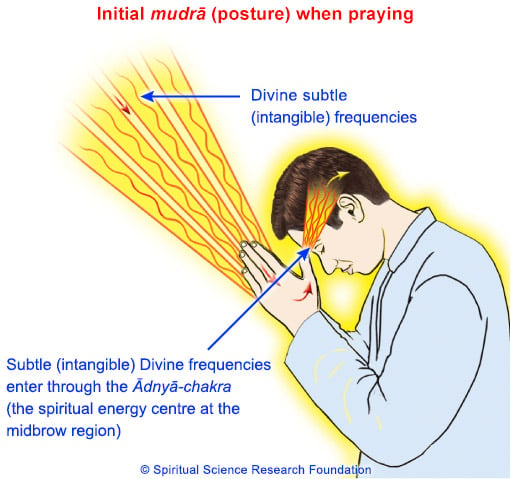 The first stage in this mudra is raising one’s hands in prayer with the thumbs gently touching the mid-brow chakra (Ādnyā-chakra) (the spiritual energy center at the mid-brow region). It is best to begin praying after we are in this position.

When we bow our head in this prayer position, it awakens the spiritual emotion of surrender in us. This, in turn, activates the appropriate subtle-frequencies of deities from the Universe. These divine frequencies come in through our fingertips, which act as receptors. These divine frequencies are then channelised into our body through the thumb to the mid-brow chakra. The result is an increase in the positive spiritual energy in us, which makes us feel lighter or gives relief from symptoms of physical or mental distress. 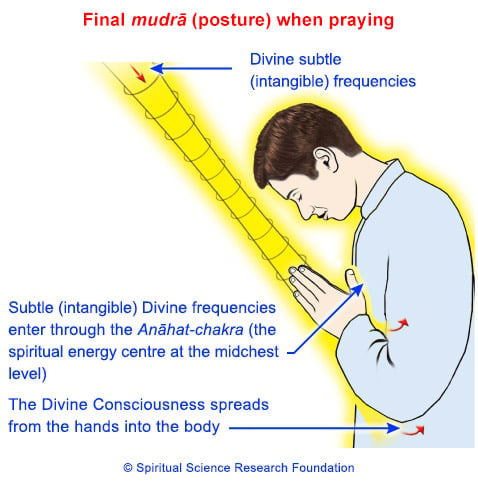 After one finishes the prayer, one should assume the second mudra as shown in the drawing based on subtle-knowledge above. This means that instead of bringing one’s hands in prayer down immediately, they are to be placed in the mid-chest region in such a way that the wrists touch the chest. This facilitates the process of more completely absorbing the Divine consciousness (Chaitanya) of the deity principle. So initially, the Divine consciousness of the deity principle that had entered the fingertips now also gets transmitted to the region of chest, the seat of the heart chakra (Anāhat-chakra). Just like the mid-brow chakra, the heart chakra also absorbs sattvik frequencies. By touching the wrists to the chest, the heart chakra is activated and helps in absorbing more sattvik frequencies. When activated, the heart chakra awakens a seeker’s spiritual emotion and devotion.

In this stage of the prayer mudra, one should be introspective and contemplate upon the experience of being in God’s presence.

5.2.1 How to pray – correct posture of the head while praying 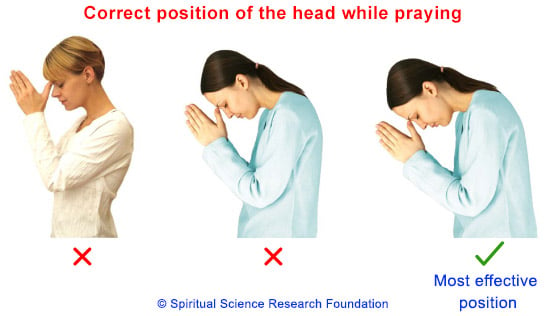 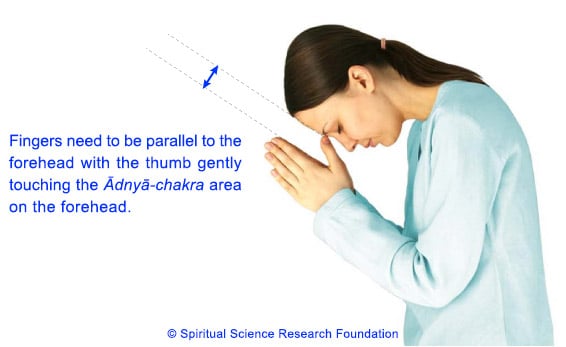 Points to note on how to pray correctly:

5.3 When praying with spiritual emotion

The following drawing based on subtle-knowledge shows what happens when a person at a 50% spiritual level prays with spiritual emotion. The main thing to note is that the people in the vicinity also derive the benefit of the Divine consciousness accessed by that person. (Refer to the part of the drawing based on subtle-knowledge which shows 5% of frequencies of Divine Consciousness transmitted outside the body.) This is why quite often it has been observed that when people pray with spiritual emotion, the spiritual emotion in others in the vicinity also gets activated. 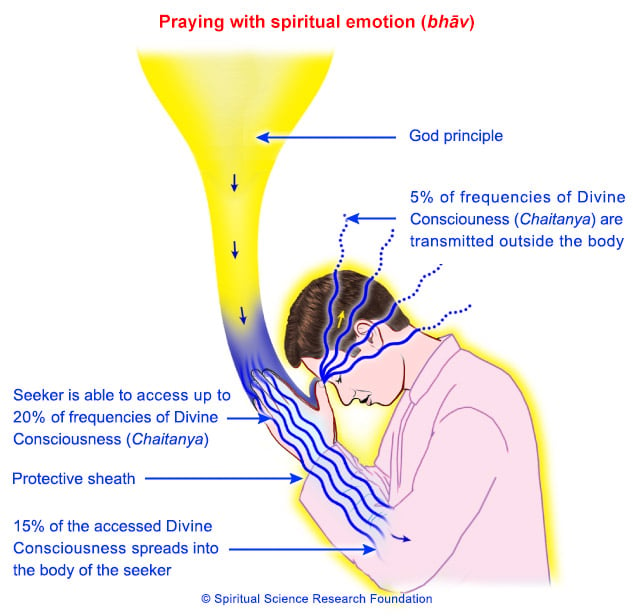 5.4 Does it mean that every time we pray we should take this position?

Since most people are not of a high spiritual level, they are unable to receive Divine frequencies through the Brahmarandhra. Most people (30–60% spiritual level) are, however, able to receive subtle-frequencies through their fingertips (though to a much lesser extent), as our finger tips are very sensitive to receiving or sending out subtle-energy. For people at this level, it is best that they do utilise the prayer mudra suggested above to make a prayer. All other factors remaining equal, by praying using the recommended mudra, a person will add 20% to the effectiveness of their prayer as opposed to not using this mudra.

We are exposed to various hand actions when praying. When conducting spiritual research into the various hand postures (mudras) related to prayer, the following were our findings in terms of efficacy:

Do try a subtle-experiment by yourself, wherein you say the same prayer using each of the above mudras separately.

In some cases, people hold hands and pray. This is also a spiritually incorrect practice because if the person beside us is affected by negative energy, it is more likely that the black energy be transferred to us.

Refer to the article on ‘How much of the world’s population is affected by negative energies?’

6. Key summary points on the mechanism of prayer 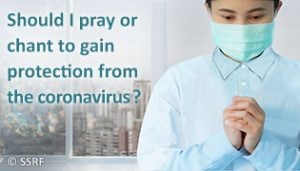