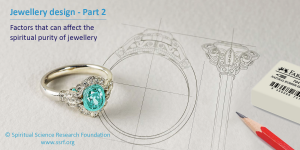 In the previous article, we shared how each jewellery piece depending on its design emits a unique set of subtle vibrations (positive or negative). In the slides below, we provide some examples of necklaces, earrings and rings along with pointers as to whether they are likely to emit positive or negative vibrations. 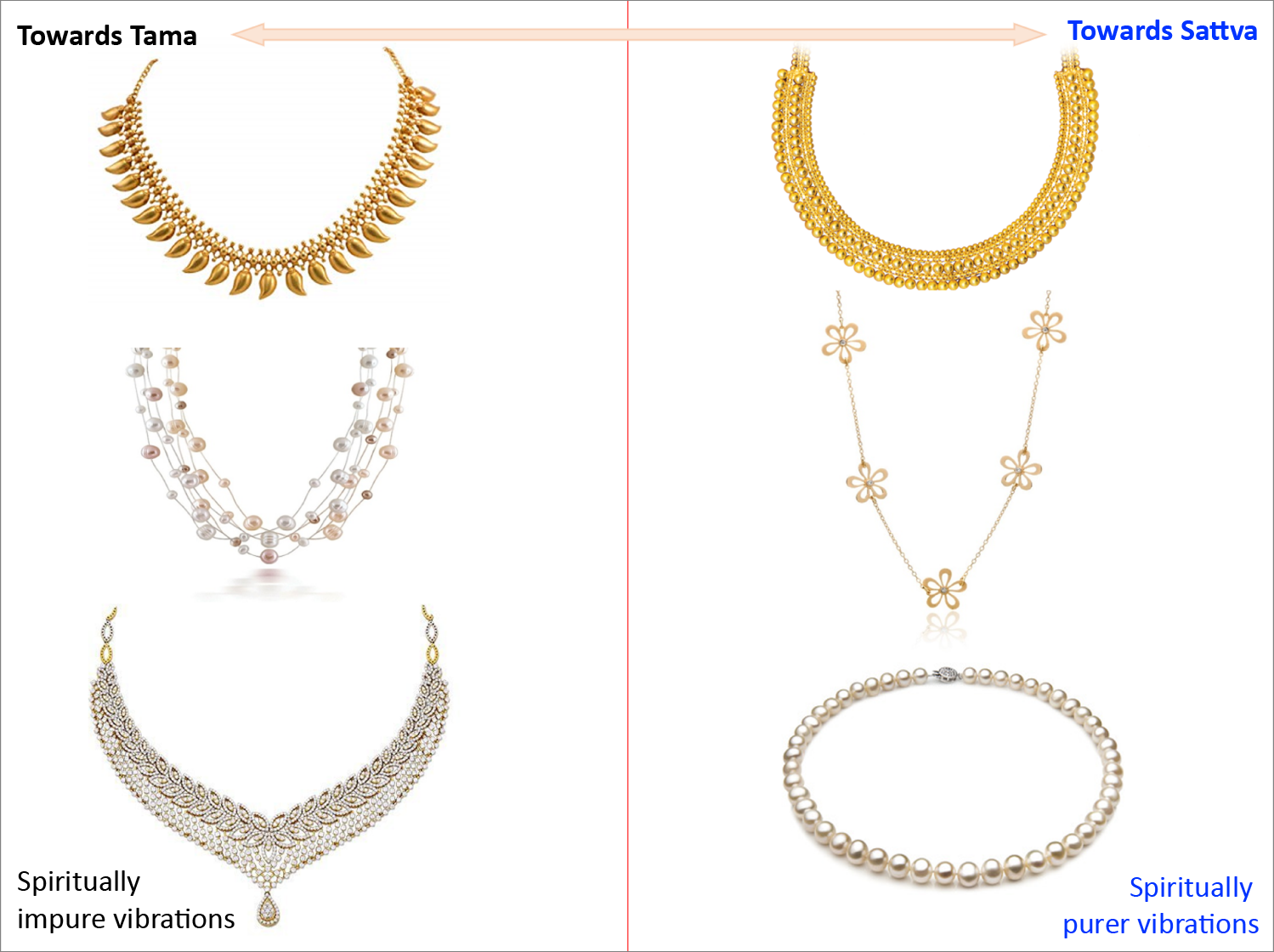 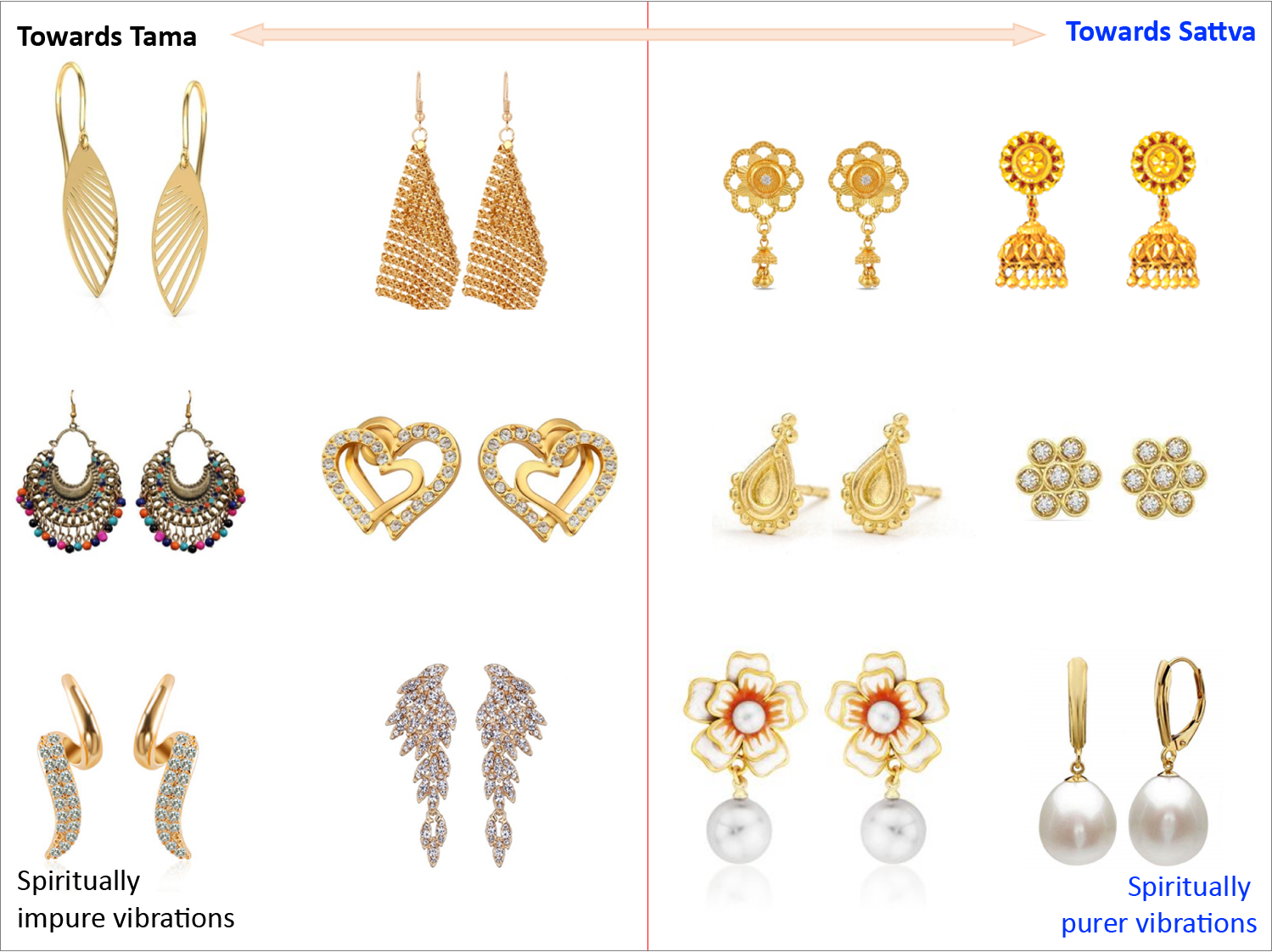 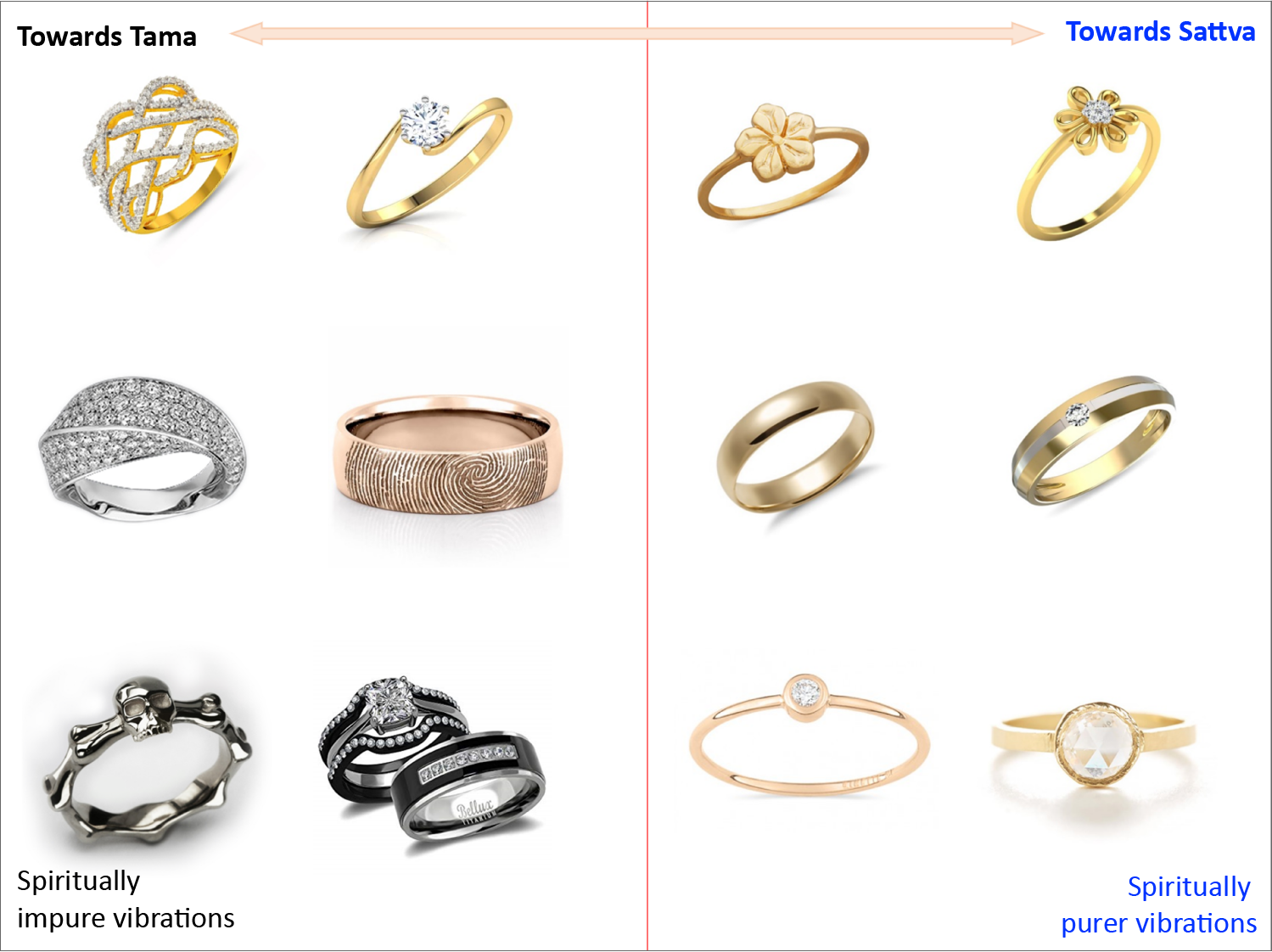 So, what influences the subtle vibrations emitted by jewellery ?

Through spiritual research, we have found that there are a few factors that can affect the spiritual vibrations emitted by jewellery. Understanding these factors and how they influence jewellery will help you make better choices when purchasing jewellery or choosing what jewellery to wear. If you are a jewellery designer, then this article will help you craft spiritually purer jewellery that will benefit your customers at the spiritual level and even provide them with spiritual protection.

2. Type of metal used in jewellery

Metals used in making jewellery have the ability to emit Divine consciousness (Chaitanya), which provides spiritual protection to the person wearing it. The proportion of Chaitanya varies with the type of metal used.

Gold is the most spiritually pure (sattvik) metal.

Please refer to the article on Sattva, Raja and Tama – Basic Components of Creation which explains about spiritual purity and spiritual impurity. 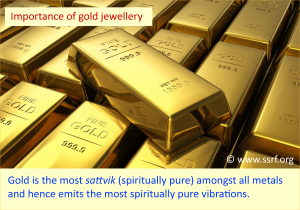 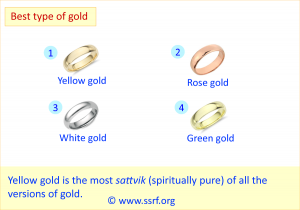 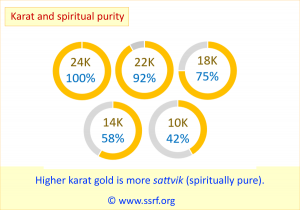 What about other metals ?

The other metals commonly used in jewellery are as follows and we have also provided their spiritual purity in terms of their predominance of Sattva, Raja or Tama.

The table below explains the proportion of Divine consciousness that is found in each type of metal.

Should I wear gold or silver for better spiritual protection ?

Women are more sensitive than men to both positive subtle energies as well as negative energies, and hence such subtle energies affect them more rapidly. Also, their effects last for a longer period on women. When a woman wears jewellery made of sattvik metals such as gold and silver, it provides her with protection at a subtle level.

So how should one decide on what parts of the body one should wear gold and silver ?

The following are simple rules that can help one to decide.

The reasons for this are as follows :

3. How jewellery is designed has spiritual effects

The design and shape of an ornament have a significant impact on the subtle vibrations that it will emit. When we look through a jewellery catalogue, the number of different designs, shapes and patterns available is vast and varied. Often, we base our choice of jewellery on aesthetic appeal, but from a spiritual perspective, we should take into account its shape.

Shown above are some examples of various jewellery design templates that jewellery designers use. One will be able to perceive how each shape emits different vibrations by observing the shapes through one’s sixth sense of vision. Each type of shape, whether it is rounded, petal-shaped, leaf-shaped, cylindrical, oval or diamond-like will have specific subtle vibrations associated with it. For example, through spiritual research, we have found that a rounded shape has much better vibrations than a sharp and jagged-edged shape. Therefore, the design of jewellery can either be spiritually positive (sattvik) or spiritually negative (tamasik). 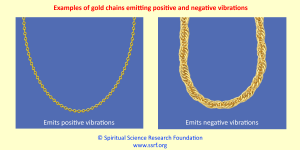 Accordingly, it is important to choose jewellery based on its spiritual vibrations and not based on aesthetic appearance alone. When selecting jewellery, we can try to perceive the subtle vibrations that emit from it through a subtle reading. It is best to perform the subtle reading after chanting the Name of God for a few minutes so the mind can achieve concentration.

Finally, how all the different elements of the jewellery are placed together, and its symmetry will determine the actual subtle vibrations being emitted from it.

4. Precious stones or gems used in jewellery have a spiritual effect

Note 1 : Planets have a great impact on the life of human beings as per Astrology. Information on wearing rings with specific stones to avoid distress due to unfavourable planetary motion finds a mention in the science of Astrology.

Important aspects which increase the benefit of ornaments

The spiritual state of the designer and craftsman and the person wearing the jewellery will influence the jewellery. 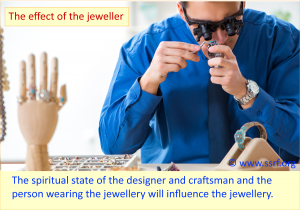 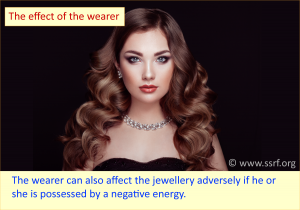 Often jewellery pieces that were prized possession of departed ancestors are cherished heirlooms in a family. More than their financial worth, the story behind such heirlooms and the people who owned them are what makes them precious to descendants. However, we would also like to share an interesting but little-known fact about jewellery that has been inherited. 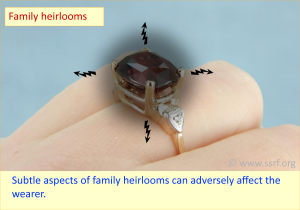 Jewellery along with other family heirlooms or possessions of departed ancestors are often possessed by departed ancestral spirits who initially owned the jewellery and are possessive about them even from the afterlife. Through spiritual research, it was found that in 30% of cases, such family heirlooms are negatively affected. The negativity they create around the ornament can adversely affect the wearer.

For example, a newly married bride may be given a ring that belonged to the departed mother of the groom and may hold tremendous sentimental value. While this gesture may be a testimony of the groom’s love for his bride, the negative spiritual vibrations associated with the ring may overshadow any psychological benefit for the bride. As the ring was the mother’s prized possession while she lived, she could very well be attached to it from the afterlife and would want a say in who wears it. The departed mother’s vibrations would continue to be associated with the ring. If the departed mother does not like her son’s bride wearing the ring, she could affect the daughter-in-law through the ring.

If one has a sixth sense, one can easily perceive if a ring is emitting negative vibrations. (Sixth sense is a by-product of regular spiritual practice that abides by universal principles). The negativity in such jewellery pieces can be reduced by spiritual healing methods which will be discussed in the last article in this 3-part series of jewellery design .

For most people, jewellery is not something that one buys frequently. Once bought it remains with that person for their lifetime. So, when buying jewellery, if we consider the spiritual aspects (as discussed in this article) along with the aesthetic and financial aspects of jewellery, only then would we get the complete benefit (real value) for our money spent. The following is a quick recap of the salient points to remember.