Dr. Pandurang or P. Marathe M.B.B.S. is a general medical practitioner from Goa, India, practicing since the last 20 years. The following is an interview with Dr. Marathe discussing the case history, the symptoms and the treatment that finally cured him.

Interviewer: Dr. Marathe, could you please explain to us, in brief, the symptoms of the illness that you had.

Dr. Marathe: Well, it started with just a fever and one week later, I passed white coloured stools. Immediately, I realized that it was a case of jaundice. Later, I started vomiting profusely and I became really weak. Within a week, I could not urinate and had difficulty opening my eyes. It got so bad that I had to be hospitalized.

Interviewer: I see. So what did the doctors diagnose?

Dr. Marathe: I underwent all the requisite medical tests and was diagnosed in medical terms as a case of Infective Type A Hepatitis. In layman’s terms it was a case of severe jaundice. I was given the appropriate treatment and I was advised complete bed rest. The doctor assured me that I would be completely all right within 6-8 weeks.

Interviewer: So did the doctor’s predictions come true?

Dr. Marathe: Well not really, things went from bad to worse. My bilirubin count steadily increased from a normal level of 1 unit to 25 units in a little over one month. Normally it is below 1 unit. Such a high level is suggestive of an obstruction in the bile ducts in the liver.

There was severe itching and also a sensation of pinpricks all over the body. I could not sleep and my weight reduced by 15 kgs from 63 kg to 48 kgs. 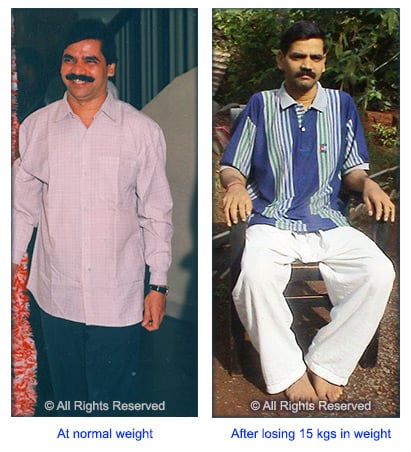 Though I sincerely undertook the treatment advised by the doctor, the bilirubin level did not come down to normal even after 8 weeks. The doctors just could not find the cause of the high and persistent bilirubin level.

Interviewer: So what did you do?

Dr. Marathe: I consulted a number of doctors and also tried alternative therapies such as Āyurvēda and Homeopathy. But nothing seemed to help.

I finally came to a point of despair. The doctors added to my despair by saying they had done all they could.

Interviewer: So Dr. Marathe, what did you do when the best of medical treatment was not helping?

At this point since nothing was working despite best efforts of the doctors, I was convinced that the cause could be spiritual in nature. I went and met the research team of the Spiritual Science Research Foundation (SSRF) in Goa, India. I was taken to their subtle-perception department. The seekers who can perceive the subtle-world took my reading in the subtle-dimension. Without even touching me and without conducting any physical tests they came to a diagnosis of my problem. What they diagnosed as the actual cause of jaundice was incredible to me. They said that it was a severe negative energy attack and it had obstructed all the bile ducts of the liver. They in fact even drew a drawing based on subtle-knowledge for me. 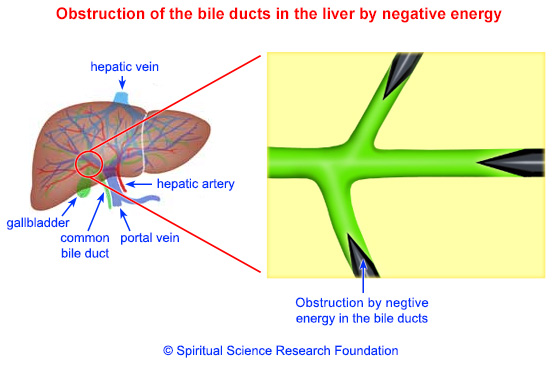 The drawing based on subtle-knowledge on the right is the computer-simulated drawing of what the seekers from the subtle-perception department of the SSRF actually saw.

The black marks that you can see is the block created by negative energy. You can see how they are blocking all the bile ducts. As the negative energy was thus blocking my regular flow of bile, there was spilling of the bilirubin in my blood. This explained the high and persistent bilirubin levels.

Interviewer: So Dr. Marathe, after the diagnosis by the subtle-perception department, what was the treatment given?

Dr. Marathe: There were two aspects to the spiritual treatment.

I put this into practice immediately and began to see the results within a week. So in summary, I should have recovered from the illness in 2 months, but because the spiritual cause was not earlier identified and treated it took me 5 months before I was able to resume work.

Interviewer: Dr. Marathe thank you for your time.