Important Note: Getting yellow fingernails as a result of Divine changes in one’s body is a rare phenomenon which only happens in spiritually evolved people who are continuously striving for the spiritual benefit of humanity. Otherwise in almost all cases of fingernails turning yellow, the reasons are medical in nature.

We are very grateful to God and the Guru Principle for having been witness to these Divine changes in His Holiness Dr. Athavale and to participate in spiritual research with regard to this unique spiritual event.

Dear readers, please refer to the following articles that provide more background with regard to the Divine changes observed in H.H. Dr. Athavale.

1 An introduction to yellow nails due to Divine reasons

In the year 2011, the nails of H.H. Dr. Athavale started to turn a deep yellow. As there was no medical reason for the change in colour, we turned to spiritual research to find out the reason for such a change. In the past too there have been many changes in H.H. Dr. Athavale’s body which we were unable to explain by modern science. For example, His body and the things He touched would emanate various fragrances such as sandalwood and other fragrances that had no earthly comparison.

In this article we will be sharing with you the various aspects of yellow fingernails and toenails occurring due to Divine changes in a spiritually evolved person’s body. We will also explain the spiritual significance of fingernails changing colour to yellow with regard to H.H. Dr. Athavale. In order to more clearly document the phenomenon H.H. Dr. Athavale allowed His nails to grow long.

2 Causes of nails turning yellow due to Divine reasons

At a physical level, the causes behind fingernails turning yellow are varied and include fungal infections, lung disease or severe thyroid disease. However when it is due to spiritual reasons, it is just the opposite and is positive in nature.

2.1 Due to His Divine mission

Incarnation of God or Avatār: When God descends to the earth to accomplish His mission He is said to have incarnated. Here The Supreme God Principle can assume the physical form of an animal or a man and may spend some period or the entire lifetime in that from. There are various types of Incarnations of God; the highest of which is an Absolute Incarnation (e.g. Lord Krushna). Parātpar Gurus are fractional incarnations of God.

In every era and sub-era, God incarnates to re-establish Dharma or Righteousness on Earth. Depending on the mission of the Incarnation of God, the colours seen on their physical body can vary. As H.H. Dr. Athavale is a Parātpar Guru (a Guru beyond the 90% spiritual level) He is also a fractional Incarnation of God. His mission is associated with Divine Knowledge. Yellow is the colour of the highest source of Knowledge in the Universe. As He has become one with the Divine Knowledge, His physical body including His fingernails have started to gain a yellowish hue.

Over 200 books on Spirituality have been published by H.H. Dr. Athavale on various aspects of Spirituality. The Divine Knowledge received by seekers under His guidance, the subtle-experiments and the knowledge received from the subtle-analysis are unique. In the majority of the books compiled by Him, over 70% of the content is Divine Knowledge being published for the first time.

As the adverse times mentioned in our article on World War 3 Predictions become imminent, one aspect of the Incarnate mission of H.H. Dr. Athavale is the protection of seekers. The yellow colour on the extremities such as on the fingernails is a sign of the Divine consciousness (Chaitanya) manifesting and activating through His body. Due to this Divine consciousness, seekers are protected from the attacks of higher level negative energies and therefore are able to stay alive during the adverse times and continue their spiritual practice. Without the protection of God through higher level Saints such as H.H. Dr. Athavale, thousands of seekers would fall prey to higher level negative energies and would not have been able to do spiritual practice in these adverse times.

2.3 Due to the nature of the Kundalini in the spiritually evolved

Refer to – What is Kundalini?

According to the spiritual Path of Kunḍalinī, the Divine consciousness required for the functioning of a human being is known as chētanā. The active part of chetana is known as vital energy (prāṇa–shakti)and the non-active part is known as Kundalini. Kundalini is used primarily for spiritual growth. The Kundalini system consists of 3 main subtle-channels and six subtle energy centres known as chakrās. As a result of regular spiritual practice, when the Kundalini is activated, the activated Divine consciousness flows upwards. It flows from the lowest of all the chakras, the Mūlādhār-chakra, through the Central channel (Sushumnānāḍī) all the way up to the Brahmarandhra, a subtle-opening situated at the crown of the head.

Here are two spiritual concepts to better understand the aspects of the following slideshow of yellow fingernails and toenails.

3.1 Left and right channels of the Kundalinī 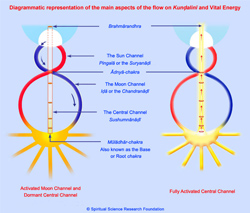 In the Kundalini system there are 3 main channels:

Due the nature of the Moon channel, subtle-energy associated with the saviour (tārak) Principle of God and unmanifest (nirguṇ) Divine consciousness is better able to flow through it. The Sun channel on the other hand is associated with the destroyer (mārak) Principle of God and works more at the manifest (saguṇ) level. Through the destroyer Principle, God protects devotees from negative energies and through the saviour principle He helps seekers to grow spiritually.

3.2 Fingers and their association with the 5 Absolute Cosmic Elements 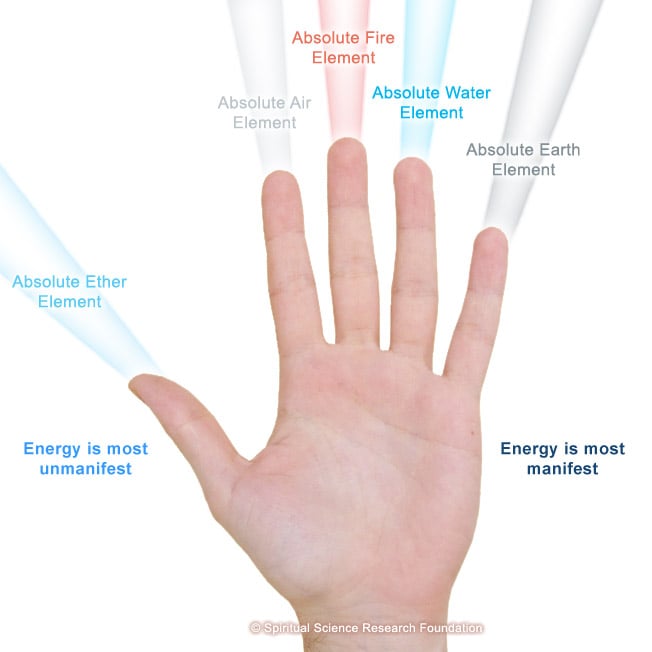 When Divine consciousness flows out of a spiritually evolved person’s hand, the energy from each finger will differ as it is modified by the predominant Absolute Cosmic Element in that finger. Accordingly as the little finger is associated with the Absolute Earth Element (Pruthvītattva), it also has the most amount of manifest Divine Consciousness coming out of it. The thumb is associated with the Absolute Ether Element (Ākāshtattva) and hence has the most unmanifest Divine Consciousness emanating out of it.

5 What do the yellow fingernails of His Holiness Dr. Athavale look like in the subtle?

In our spiritual research team, we have seekers who have an advanced sixth sense of vision. By the grace of God and with many years of regular spiritual practice these seekers are able to see into the spiritual dimension, just as we see the physical dimension. One such seeker Her Holiness (Mrs.) Yoya Vallee created a drawing based on subtle-knowledge of all the spiritual vibrations emanating from the hand of H.H. Dr. Athavale when His nails had turned yellow. All of H.H. (Mrs.) Yoya Vallee’s drawings based on subtle-knowledge are verified by H.H. Dr. Athavale for subtle-accuracy before they are published.

The accuracy of this drawing based on subtle-knowledge is 80%, which is well above the average subtle or clairvoyant artist’s ability. 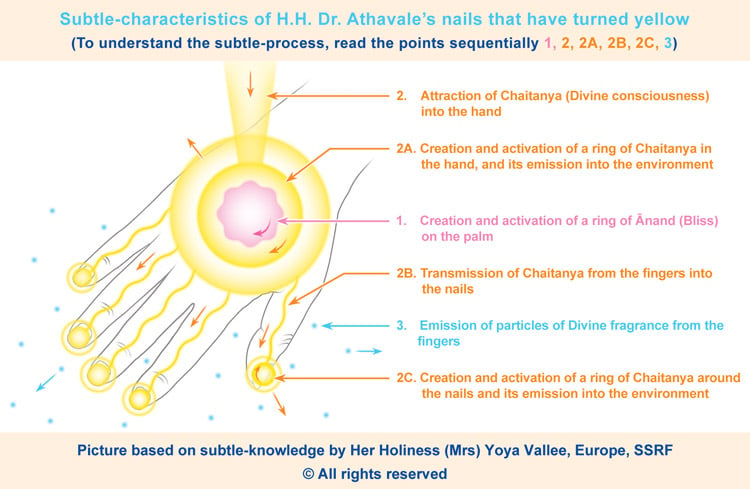 The coming times will be very adverse for all of us. Highly evolved Saints such as H.H. Dr. Athavale have made a resolve for the spiritual growth of seekers as this period is very conducive for spiritual growth. When we consistently practice Spirituality, we are also able to access God’s protection. We pray that as many people as possible start spiritual practice and take the maximum benefit of the current times to go ahead in their spiritual journey.