Here we present a rather spectacular case study of supernatural scratch marks that suddenly appeared on a Saint’s photograph without any apparent reason.

They occurred on the photograph of His Holiness Bhaktaraj Maharaj, a higher level Saint and the Guru (spiritual master and guide) of H.H. Dr. Jayant Athavale, in January 2006. 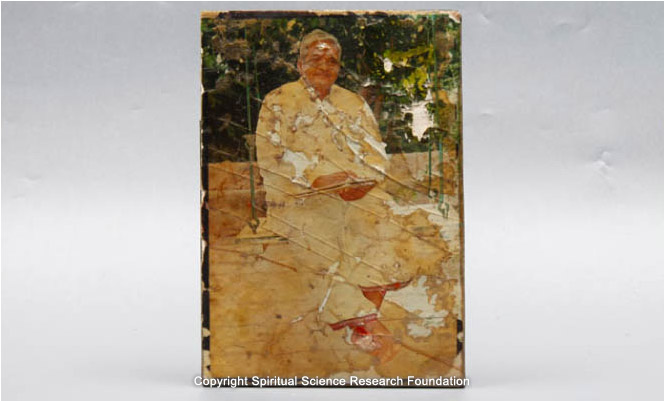 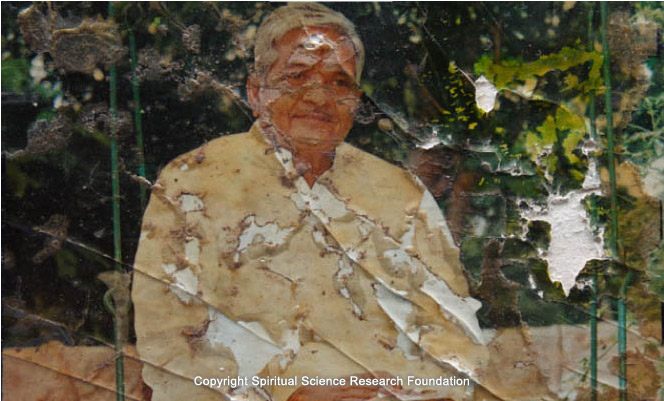 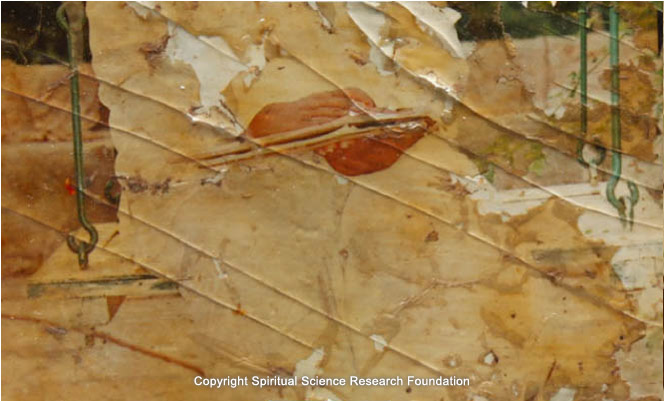 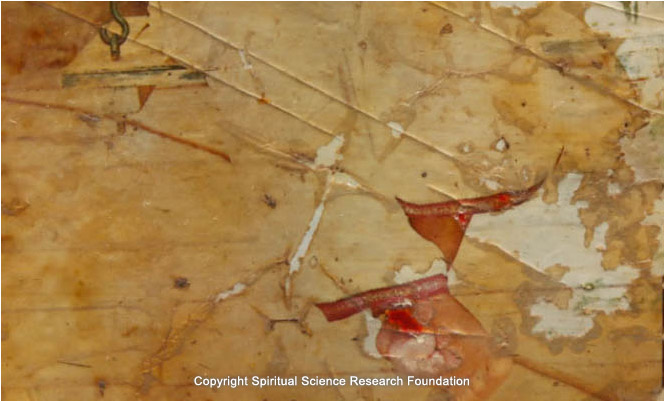 As you can see, the photograph has been seriously damaged by a number of scratches, spots, and stains.  Through study using advanced sixth sense, we found that the cause of these deformations was an attack by a negative energy (ghost, demon, devil etc.).

2. Subtle reading through the medium of advanced sixth sense

Mrs. Yoya Vallee is a seeker with an advanced sixth sense of vision. She can perceive what happens in the spiritual dimension and as part of her spiritual practice, she draws what she sees. This is what she perceived through sixth sense, when she was asked to study the photograph we have displayed above. The drawing based on subtle-knowledge has been checked for accuracy by H. H. Dr. Jayant Athavale. 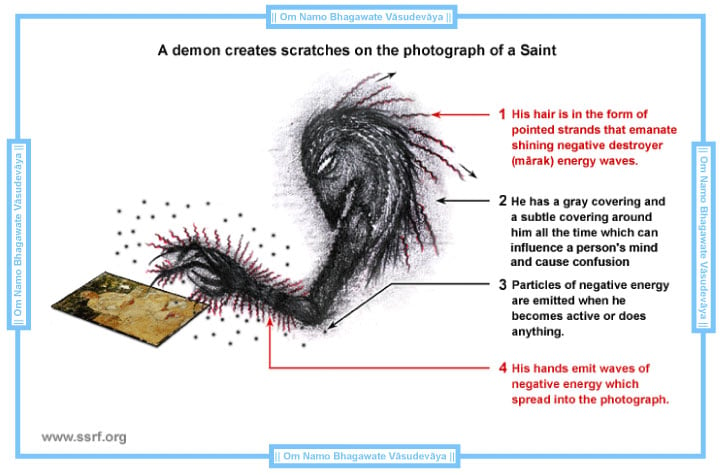 Click here to read more details about the features of the attacking entity perceived by Mrs. Yoya Vallee.

Date on which the picture was drawn by Mrs. Yoya Vallee – 19th January 2010

Truth or accuracy of the picture : 80%

Distressing vibrations from the picture : 40%

Type – He is a strong demon

The sorcerer who is guiding him is from 5th region of Hell (Pātāl).

He has a pointed sharp face with active black energy that is generated from his skin in slow movement like that of a snake or serpent.
He has sharp pointed white eyes.

1. His hair is in the form of pointed strands that emanate shining negative destroyer (Mārak) energy waves.

He is black, skinny and has a sharp body.

2. He has a grey covering and a subtle covering around him all the time which can influence people’s mind or confuse them.

He has long fingers with sharp long strong nails to scratch the photograph. Thus, he scratched with strong rapid force.

3. Particles of negative energy are emitted when he becomes active or does anything.

4. His hands emit waves of negative energy which spread into the photograph.

The negative destroyer energy (Mārak) waves emitting from his hair can influence the picture’s ability to absorb Divine Energy (Shakti).

As can be seen from the drawing based on subtle-knowledge, a negative energy (ghost, demon, devil etc.) attacked the photograph.

Through further study, we found that during the attack on the photograph of H. H. Bhaktaraj Maharaj, the demon was acting under the orders of a more powerful subtle-sorceror (māntrik) from the 5th region of hell.

3. Divine Knowledge about the attack

The following are details about this attack as perceived by another SSRF seeker, Mrs. Anjali Gadgil, who receives Divine Knowledge. She was able to perceive the process of destruction employed by the subtle-sorceror who was orchestrating the attack. 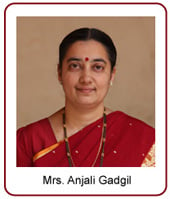 “The subtle-sorceror created a covering of scratches on the photograph by concentrating on thoughts and using will power. When his process of thinking increased, the negative frequencies in the atmosphere got consolidated and manifested at the desired location. Since the subtle-sorceror’s speed of projecting thoughts is very high, he was able to cause distress within a very short time span.

By consolidating the black energy coming out through the many scratches, dark colour spots were created. In addition, by using spiritual power, a few watery and transparent stains were also made so that seekers could be attacked unknowingly.

When he destroyed the picture in January 2006, the demon had 30% energy. His energy reduced to 25% by 2010 when he was still active in causing harm to society.

4. Effectiveness of the attack

The table below provides information on the effect of this negative energy attack. The total effectiveness of the black energy during the attack was 20%.