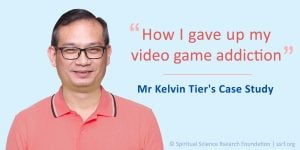 Over the years, the spiritual research team at SSRF has been privy to many cases of seekers who have overcome various types of addictions in their lives, and video game addictions are no exception.

The only thing these seekers did was to start spiritual practice.

This case study is about how one such seeker Mr Kelvin Tier overcame his addiction to video games. He has shared his journey in his own words.

2. How my addiction to video games affected my life

I would spend an excessive amount of time everyday playing computer games, and I had difficulty in staying away from playing them. 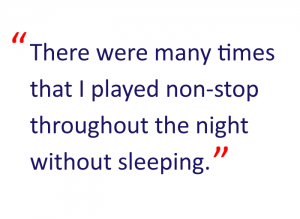 This problem persisted into adulthood and in fact, my addiction to video games escalated with the introduction of online gaming and mobile gaming. I would spend most of my free time playing mobile games for many hours daily. I never wanted to stop playing, despite my family reminding and cautioning me about spending too much time playing games, and as a result I was neglecting my family. There were many times that I played non-stop throughout the night without sleeping. I would be feeling physically and mentally tired but yet my mind would remain active and the intense desire to keep playing did not diminish. Whenever I stopped playing, I would feel very unhappy and often get angry too. During work, whenever I could not play video games, my mind would be preoccupied about the next window of opportunity that I would have to play.

I was aware that I was wasting a lot of time in gaming and that it was a problem which I needed to put an end to. However, I could not overcome the urge to play games. I did not feel good about myself; I was aware that it was affecting my life and family relationships negatively, yet I felt helpless in trying to quit gaming. Many times, I would tell myself that I would try to reduce or limit my gaming time, but every time I started to play, there was no thought of stopping. I remember one time I was feeling very ill and had a fever, but I still carried on playing.

There were a few occasions I stopped playing only after experiencing gaming burn out, where I finally felt physically and mentally fatigued, having reached my maximum. However, after some months, I would relapse again and start playing online games nonstop daily, repeating the cycle.

3. How I gave up my video game addiction

About 3 years ago, I attended a 5-Day Spiritual Workshop in Goa, India and started doing spiritual practice under the guidance of the Spiritual Science Research Foundation (SSRF).

I came to understand how addictions can have their root cause in ancestral problems or negative energies and I received step-by-step guidance during weekly satsangs (spiritual meetings) on how to overcome my video game addiction. 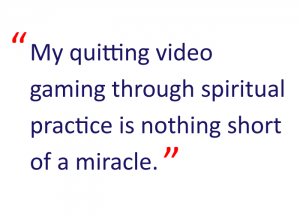 Gradually after 6 months of spiritual practice along with spiritual healing measures such as the Salt Water Remedy, chanting God’s Name and doing Personality Defect Removal (PDR), I slowly started to reduce the time I spent playing video games. A few weeks before Gurupournima (a day on which the Guru or Teaching Principle of God is 1000 times more active), I prayed to Paratpar Guru Dr Athavale for His grace and guidance to help me, and I kept the aim to quit gaming. A ‘Paratpar Guru’ means a Guru who is above the 90% spiritual level. By His grace, within the next few weeks, the desire to play video games suddenly reduced greatly, and my gaming came to a complete stop during the month of Gurupournima.

4. Giving up smoking cigarettes as well

In addition to overcoming my video game addiction, my desire to smoke cigarettes also went away by itself since I started spiritual practice. I have completely stopped smoking as well.

I offer immense gratitude to God and I pray that this experience inspires others to begin spiritual practice and experience a better quality of life.