1. What is salt water remedy?

Ghosts (demons, devils, negative energies, etc.) affect people and cause distress to them through their subtle black energy. Black energy can create a variety of problems such as depression, unclear thinking or malfunction of an organ which can lead to further difficulties such as addiction, financial problems or chest pain respectively.

Ghosts transmit their black energy to the people that they target/ attack and create large stores of it in their bodies. It is difficult to get rid of this black energy except through a generalised spiritual remedy such as spiritual practice or a more specific one like the salt water remedy.

The salt water remedy is a simple but powerful spiritual remedy to counteract harmful unseen black energy and drain it out of our system. By doing so, we do not waste our spiritual practice in counteracting black energy. Instead it can be used to bring about our spiritual growth.

2. When should we use the salt water remedy?

The majority of us are affected by ghosts to varying degrees. As a result, most of us have some degree of black energy covering. Performing the salt water treatment on a daily basis helps to remove this black energy from our body.

The salt water treatment should especially be done when one experiences symptoms such as :

When we are experiencing any one of the above symptoms, we are in a weakened state physically, emotionally or spiritually. Ghosts attack us in this weakened state, infuse more black energy and play up the symptoms to an even greater extent.

The picture below is a drawing based on subtle-knowledge of a ghost causing depression in a person. 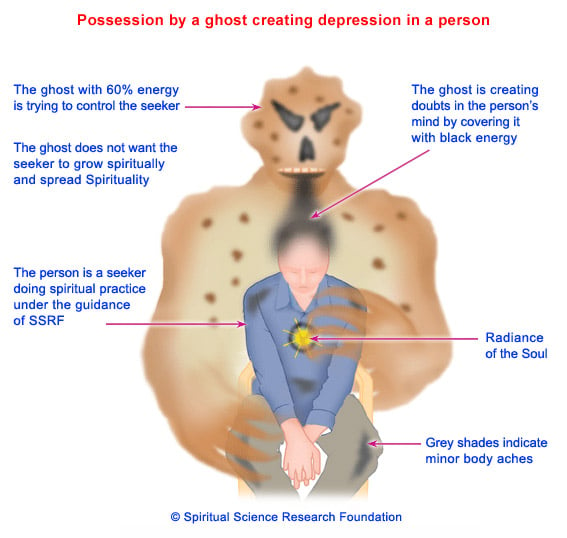 Note: Every time we are in a weakened state (especially at a spiritual level), we leave ourselves open to attack, as it is in this state that ghosts (demons, devils, negative energies, etc.) require the least amount of energy to affect us.

In cases of severe distress, the salt water remedy can be repeated 2-3 times in a day at 2-3 hour intervals for better results.

3. What is required for the salt water remedy?

4. How is the salt water remedy performed?

5. What is the mechanism of removing negative energy?

5.1 Can Epsom salt be used instead of Rock salt ?

Epsom salt is magnesium sulphate and is different from rock salt which is sodium chloride. While epsom salt has been known to have various physical and health benefits, from the viewpoint of removing black energy from the body, epsom salt has no value.

6. Examples of the benefit of the treatment

6.1 What actually happens in the subtle dimension during the salt water remedy?

When a person affected by ghosts (demons, devils, negative energies, etc.) did the salt water remedy, Madhura Bhosale, a seeker with advanced sixth sense (ESP) ability perceived the following effects of the remedy on the ghost and its black energy.

6.2 Drawing based on subtle-knowledge of black energy being removed 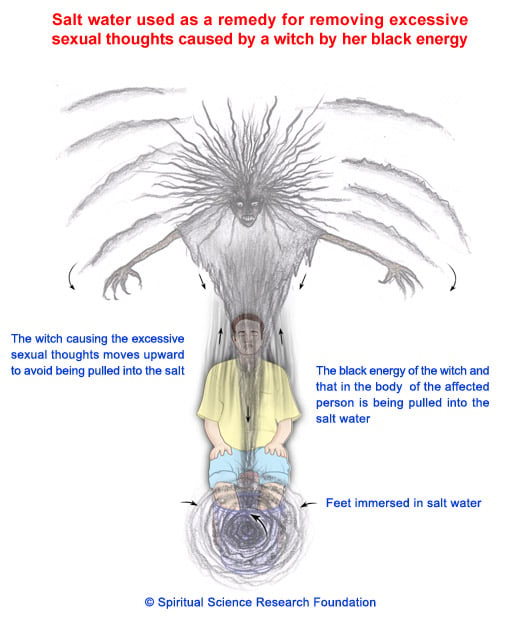 The above is a drawing based on subtle-knowledge of the effects of the salt water treatment on the black energy of a witch (chetkin) who was causing excessive sexual thoughts in a person.

Refer to the Case Study on excessive sexual thoughts

Also refer to – Why do we have protective borders?