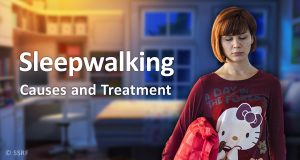 Sleepwalking, (also called somnambulism) is a parasomnia or sleep disorder that originates during deep sleep and results in walking or performing other complex behaviours while asleep. It is much more common in children than adults. The sleepwalkers show a variety of behaviours, ranging from cleaning the house, switching the lights on and off, walking around the house or on to the street, going places, driving a car, talking as if in a ‘conversation’, shouting, using abusive language, throwing things, urinating in closets, hitting their partners, etc. In some cases, people have had sex with their partners or strangers or even sexually assaulted others (sexsomnia) and committed murder while sleepwalking (homicidal sleepwalking).

Typically, the sleepwalker’s eyes are open with a glassy stare as he roams the house. If you question him, he’ll be slow to respond or not respond at all. When you get him back to bed without waking him up, he usually won’t recall the event (Webmd.com).

In a study, published in the May 15, 2012 issue of the journal, Neurology, after studying a sample size of over 19,000 people of the US adult general population, researchers found that almost 30% of adults said they have strolled while snoozing at least once throughout their lifetime. About 3.6% of U.S. adults – about 8.4 million people – sleepwalk each year (neurology.org).

According to Modern Science Sleep experts say that anxiety, fatigue, stress, worry and sleep deprivation are some of the causes of sleepwalking. Sometimes sleepwalking can by triggered by underlying conditions that interfere with sleep, such as :

Causes of sleepwalking according to spiritual research findings

Spiritual research, unlike modern science research not only looks at the physical and psychological dimensions but also the spiritual dimension. The chart below provides on average the root causes behind sleepwalking. 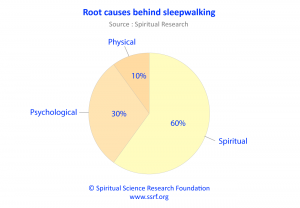 As you can see from the chart above, spiritual factors are the main root causes of sleepwalking. This is one of the reasons why modern science has not been able to come up with a cure for sleepwalking.

Spiritual factors are primarily due to departed ancestors and the common ghost playing pranks, i.e. getting the person to commit some small acts of mischief. Refer to the article – Why would our ancestors want to trouble us ?

Note : When sleepwalking runs in the family, the reason is mostly due to departed ancestors.

More elaborate acts during sleepwalking such as having sexual interactions with strangers, gruesome murders, etc. are orchestrated by higher level negative energies such as subtle sorcerers, also known as mantriks. According to spiritual science, even though an act may have happened due to the person being under the complete influence of the ghost, he/she still has to face karmic or spiritual repercussions for it. These spiritual repercussions are in the form of demerits accrued, which play out either in this life or the next. However, the demerits incurred are less than if the person committed murder in the waking or conscious state of his own volition. If the cause of sleepwalking is spiritual in nature as opposed to psychological, then the demerits earned are even less. The following diagram explains this in more detail. 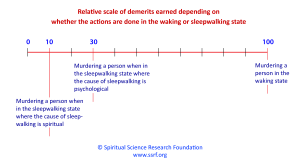 Why should we have to pay (at a karmic level) for a crime or bad action that a negative energy does through us ?

The reason for this is that a negative energy gains entry into our consciousness and possesses us due to our own vulnerabilities. These vulnerabilities include a high number of demerits accrued from previous births, incorrect deeds, personality defects such as fear and anger that lead to anxiety and stress, lack of spiritual practice, etc.

3. Sleepwalking – What happens in the spiritual dimension ?

There are seekers in our spiritual research team who can perceive the subtle vibrations emitted by people and objects. They have the ability of receiving Divine knowledge in a visual format through an advanced level of sixth sense. These drawings are akin to spiritual X-rays and provide the average person with an unparalleled glimpse into the spiritual dimension.

In the slideshow below, the subtle process of how a negative energy causes sleepwalking is presented. 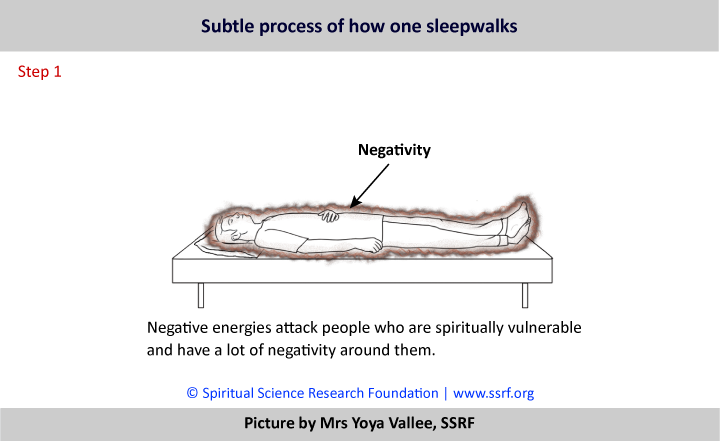 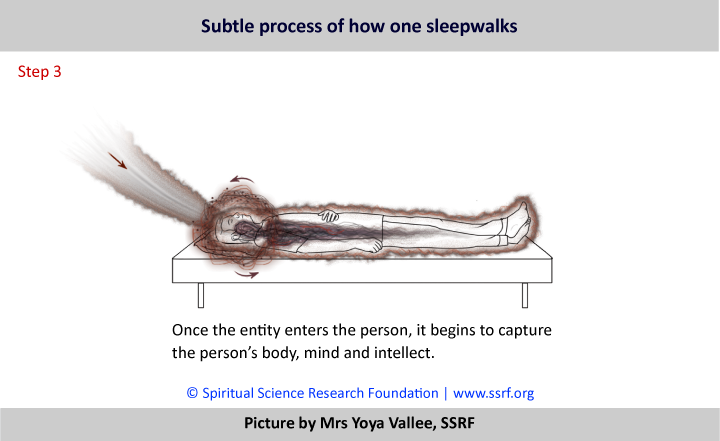 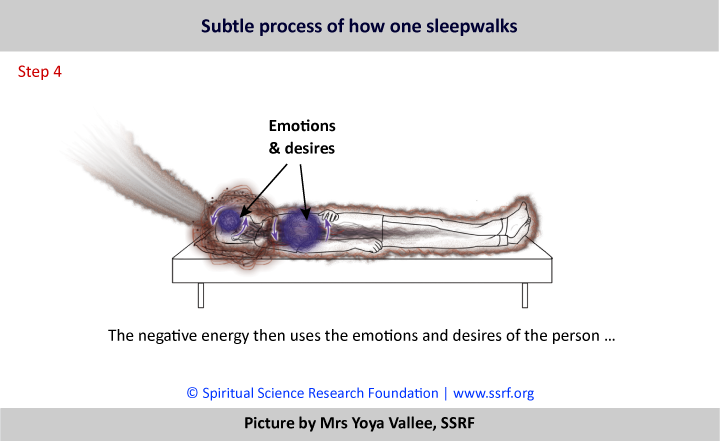 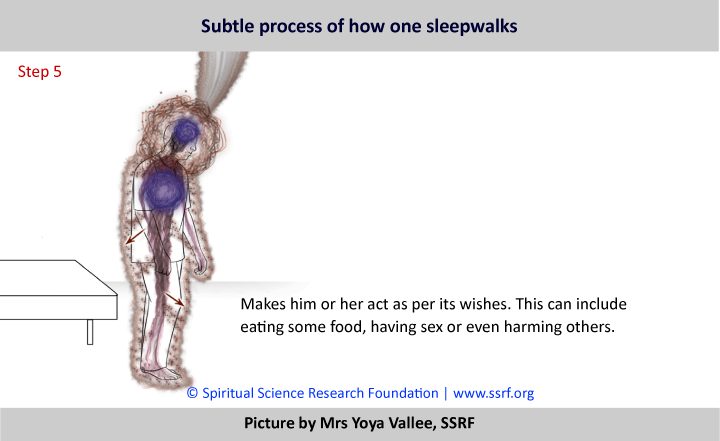 With regards to the myth about not waking up sleepwalkers, whether the root cause is psychological or spiritual, it is imperative that we wake them up. This is because if the root cause of the sleepwalking is because of being affected by ghosts and the act by itself is a manifestation, then waking them up helps to end the manifestation of the entity. Even if the root cause is psychological, it is best to wake them up so as to prevent them from causing harm to themselves or others.

The following are a few things you can do specifically for sleep disorders such as sleepwalking.

How to sleep well