At the outset we have to understand that

We also need a basic understanding of the Kunḍalinī energy system of the body.

The Kundalini is the inherent spiritual energy system in the body. It consists of 7 main centres or chakras, 3 main channels – the Sun Channel (Right channel or Pingalānāḍī), the Moon channel (Left channel or Iḍānāḍī) and Central channel (Sushumnanāḍī) and innumerable ducts and ductules.

The below diagram is a representation of the dormant Kundalini energy system in a human being. 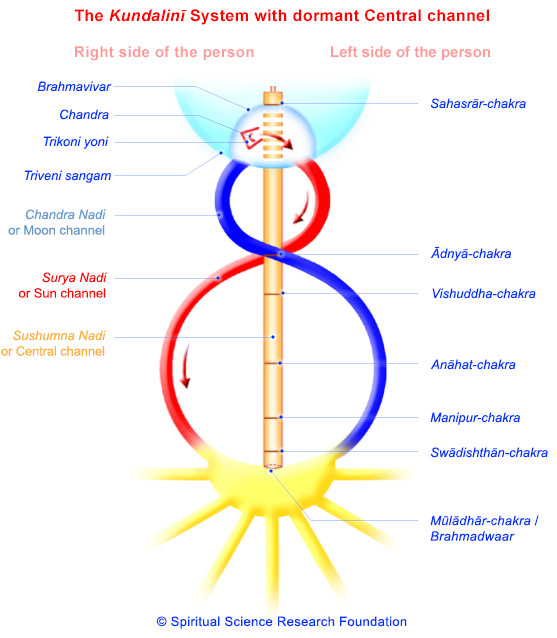 The energy for the bodily and mental functions flows through the Sun and Moon Channels. The energy flowing through the Central Channel is related to spiritual growth.

The activation of the channels also depends on the sleeping position. The channel opposite to the side we are sleeping on gets activated predominantly. When one sleeps on the back, the Central channel gets activated in people above the 55% spiritual level. In people below this level, no channel is activated.

The activation of the Sun or Moon Channel can also be as per the requirement of the body. For example, after our meals the Sun channel is predominantly activated to facilitate digestion of food.

Also when there is a surge of emotions, the Sun channel is activated. When the emotions subside, the Moon channel gets activated. However, when there are rapid and frequent vacillations in the emotional state, there is a rapid and irregular shift in activation of the two channels as the Sun channel remains predominantly activated. As a result, there is an imbalance in the two types of energy flows (Raja and Sattva). In an emotional person, this roller coaster of emotions continues even in sleep in the sub-conscious mind. This is because the impressions in the sub-conscious mind are active even in sleep.

Refer to the tutorial – The spiritual nature of the mind.

2. Sleeping position 1 – sleeping on the back 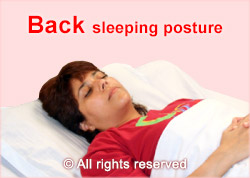 Chetanā is that part of the Divine Consciousness that governs the physical and mental functions, and also activates the five vital energies in the body

Due to the combined effect of the above two factors, the body cells are unable to repel the attacks by distressing vibrations from the Hell region.

However, the effect of this sleep position differs as per the spiritual level of the person.

In a person below the 55% spiritual level, the extent of emotions is quite high compared to his spiritual emotion (bhāv). Due to this, there are frequent and rapid vacillations between the channels. Hence, there is a constant imbalance in the energy flows from the Sun and Moon channels of the Kundalini energy system in the body.

As explained above, when a person below the 55% spiritual level takes a sleep position of lying on his back, his Central Channel is not activated. However, because of his emotional nature there is an imbalanced flow of energy to the body. The imbalance between the two energy flows of the Sun and Moon Channels can effect a rapid transfer of subtle basic Raja-Tama components in the body from the surrounding atmosphere. When there is an increase in the subtle basic Raja-Tama components, a person runs a higher risk of being attacked by distressing vibrations from the Regions of Hell. However, once one has progressed spiritually to the level of unmanifest spiritual emotion, one can control the energy flows. Till such time, it is best to avoid sleeping on one’s back where there is maximum exposure of the body to the ground, and thereby to the Regions of Hell.

Remedy: However, for some reason if one does need to sleep on the back, the risk of distress can be reduced by using spiritual remedies like lighting a sāttvik incense stick, like the SSRF incense stick, near the bed before going to sleep, keeping a picture of God under the pillow, spiritual purification of the bedroom, especially near the bed, playing the chant of Name of God in a very low volume throughout the night, etc.

A sāttvik intellect is subtle basic sattva component predominant and is derived through spiritual practice. It has risen above being used for just worldly aspects and is devoted to serving God and spiritual growth. Until one has a sāttvik intellect it is very difficult to comprehend the implied meaning of Holy Texts.

When a person above 55% spiritual level sleeps on his back, his Central Channel of Kundalini system is activated. The spiritual emotion of this person is quite high; whereas the influence of emotions is quite reduced. When one is above the 55% spiritual level, one attains control on the flow of the subtle basic Raja-Tama in the body as per the requirement. This happens at the level of one’s unmanifest spiritual emotion. This is because one starts functioning more and more at the level of the Energy of Soul (ātma–shakti). This is opposed to the level of Energy of Mind (manaha–shakti) in the case of people below the 55% spiritual level. This Energy of Soul maintains the balance between the Sun and the Moon channels of the Kundalini system.

Below is a drawing based on subtle-knowledge, of the effects of sleeping on one’s back when one is above the 55% spiritual level. 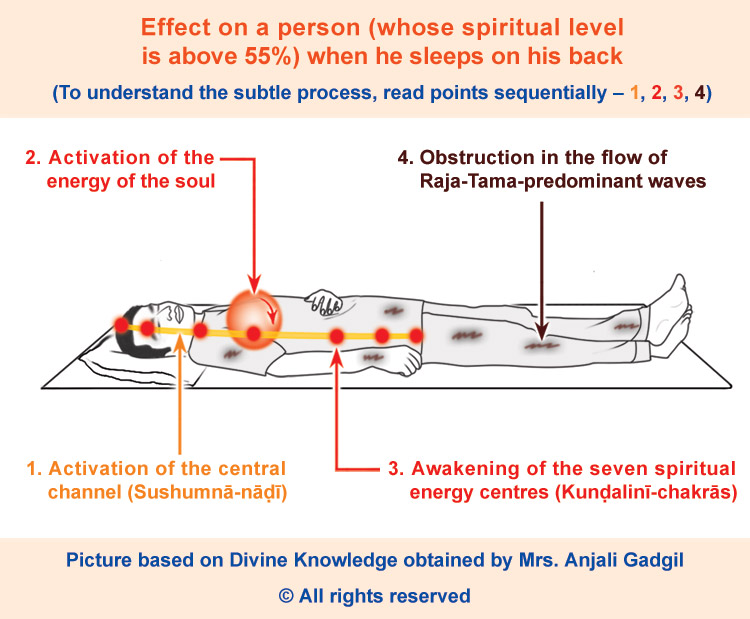 3. Sleeping position 2 – sleeping on the stomach 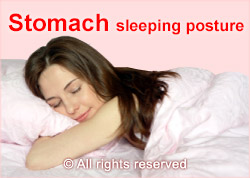 Below is a drawing based on subtle-knowledge, of the effects of sleeping on one’s stomach. 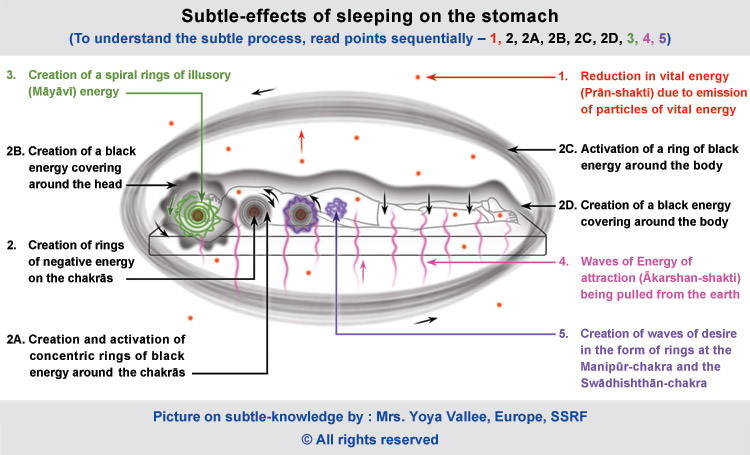 4. Sleeping position 3 – sleeping on the sides

When a person sleeps on his side, the Sun or Moon channels of the Kundalini system are predominantly activated.

Below is a drawing based on subtle-knowledge, of the effects of sleeping on one’s right side. 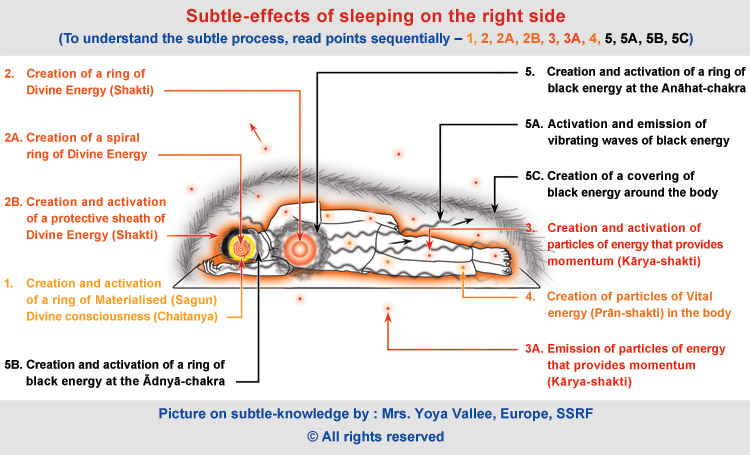 Below is a drawing based on subtle-knowledge, of the effects of sleeping on one’s left side. 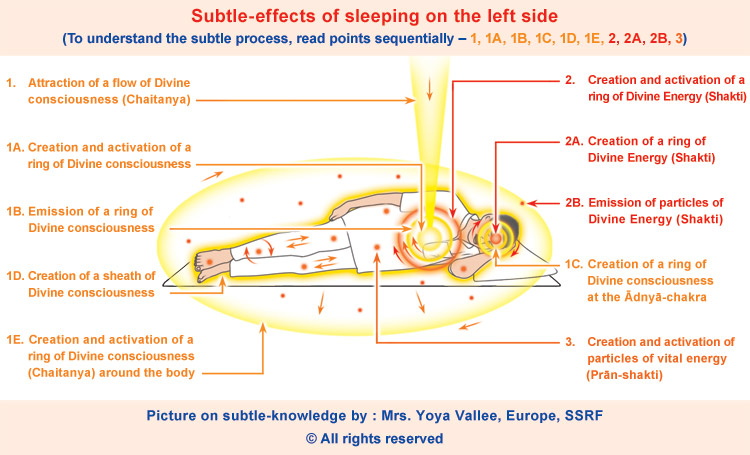 When the Sun or Moon channels are activated, the chetana in the body cells remains activated. As a result, there is a lower level of the subtle basic Tama component generated and the chetana also helps fight the attacks from ghosts.

From a spiritual perspective, unless one is above the 55% spiritual level, the best sleeping position is on the left side.