Mankind is benefitted by the spiritual purity generated when making spiritually correct lifestyle choices. The influence of the Raja and Tama subtle basic components (excessive activity and ignorance) on him also reduces. The lifestyle choices include daily routine, diet, clothing etc. The number of people following a spiritually pure lifestyle is on the decline in Kaliyug. Beverage choices are also no exception to this. In this article we find out the vibrations emitted by coffee, tea and milk. From this we will realize the importance of choosing drinks that spiritually benefit us.

1. Effects of coffee, tea and milk – a spiritual perspective

Tea, coffee and milk are consumed daily by millions of people worldwide. Tea and coffee are distinctly the beverage of fashion, and may be said to typify the highest refinement of social life. To brew a cup of tea or coffee for a guest is a commonly accepted social norm. Both are often associated with relaxation and positive mood states as has been demonstrated empirically over recent decades.

We drink tea or coffee as per our likes and dislikes, to feel energized or as a comforting habit, but we are not aware of the fact that they have a harmful effect on us. Some people even become addicted to them. There are several types of poisons in tea and coffee. On the other hand, drinking Indian cow’s milk provides us with physical, psychological and spiritual benefits.

If one has an above average sixth sense ability, one can easily perceive spiritual vibrations, perceive whether an object is spiritually useful or not and accordingly make spiritually correct choices in life.

Some types of biofeedback equipment such as the RFI (Resonant Field Imaging) and PIP (Polycontrast Interference Photography: a bio imaging type of equipment) are able to pick up the vibrations around an object and display it in a visual format. This gives an average person the opportunity to visually see the aura or energy field of an object.

Click on this link for more information about the PIP and its uses.

In this experiment we explored the vibrations emitted by tea, coffee and milk using scientific biofeedback instruments.

Before: The first image we took was of an empty glass showing the aura inside and surrounding it. Here orange represents vibrations of tension, green signifies positive energy and yellow with a golden tinge signifies high level of universal vibrations. 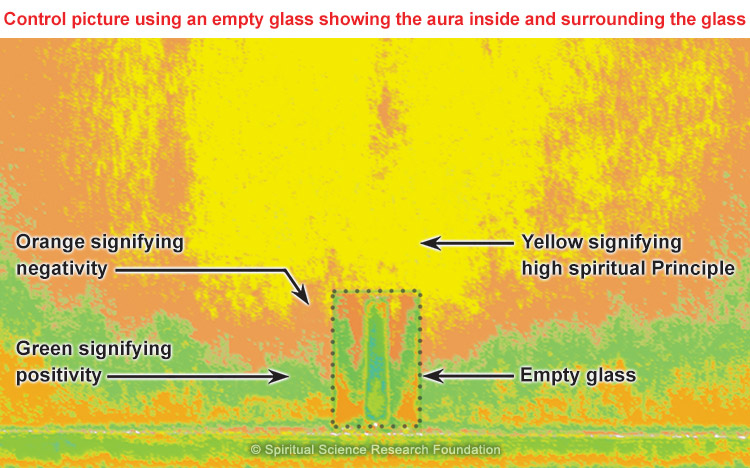 Coffee: We then photographed the vibrations after adding coffee to the glass. The colour of the coffee appears to be dark bluish. This colour denotes mild distressing vibrations. At the corner of the glass with coffee, the colour is reddish which denotes energy. The glass containing coffee is surrounded by negative orange colour. Due to the orange aura the yellow aura denoting high spiritual principle has been pushed upwards. The expanse of this yellow aura is less than in the PIP photographs of tea and milk. In the centre of the yellow aura a white aura denoting purity is present to some extent. The expansiveness of this aura is comparatively more restricted than that of tea and milk. The green aura has moved away from the glass due to the orange aura. 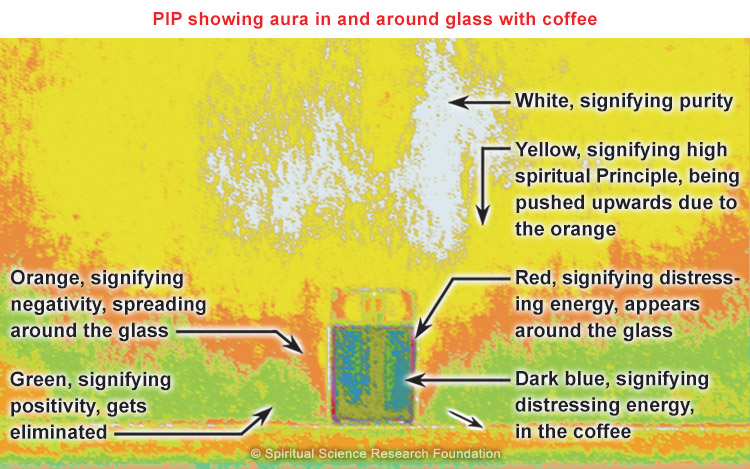 Tea: The next image shows the vibrations of tea (black Indian tea). Tea emits negative orange colour, red colour denoting energy and some green colour denoting positivity. The negative orange colour comes near the glass with tea but it does not touch the glass. A yellow aura denoting high spiritual principle is seen along the sides of the glass to some extent. It is restricting the orange aura. The yellow aura is comparatively more present than in coffee and less than in milk. The expansiveness of the white aura is comparatively greater than that present in coffee and less than that present in milk. The green aura has moved away from the glass due to the orange aura. 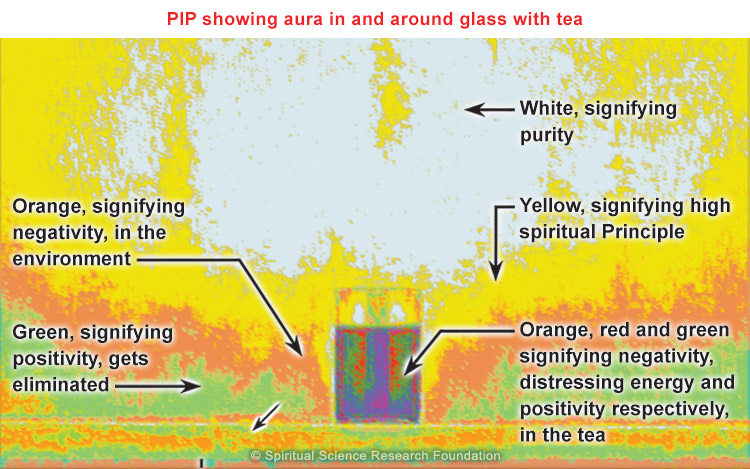 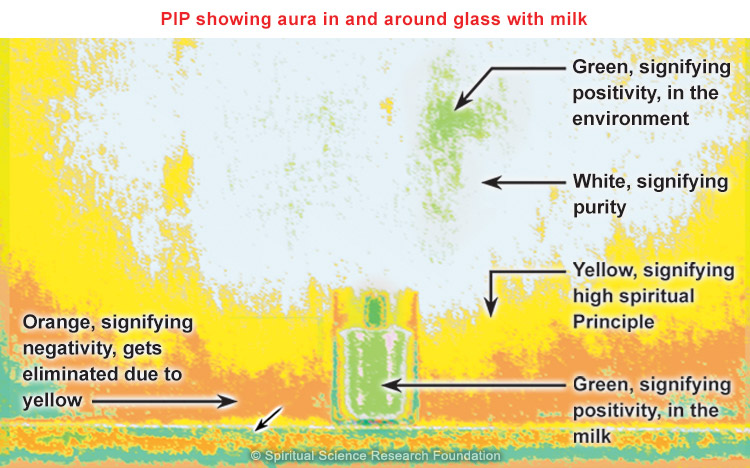 The above scan and analysis was done with the help of Mr. Santosh Joshi (Universal Energy Researcher, Mumbai, India).

SSRF appeals to scientists and experts in the field to join us in studying the various unexplained phenomena in the spiritual science research centre in Goa, India.