1 Background of the experiment conducted

SSRF has conducted many experiments to understand how people are affected when interacting with each other. The main purpose of these experiments is to understand how people can affect each other at a spiritual level which can result in people being affected at a physical and/or psychological level. How people affect one another in an interaction is usually dependant on the spiritual level of the people involved and whether they are affected, possessed or unaffected by negative energies. Below we have given a few examples of the effect of interactions between various people.

Like the above examples, we may have various interactions with people we know as well as those whom we do not know on a daily basis. Most people do not have the subtle ability to understand as to whether the person one interacts with is affected or unaffected by negative energies.

An ‘interaction’ with a person refers to and includes the following scenarios:

In early 2009, SSRF’s Spiritual Research Centre was visited by two people from overseas. Within 48 hours of their arrival at the Centre, we asked one of them to take part in an experiment to test the effect of a Saint when interacting with a person. However, the nature of the experiment was not revealed to the person prior to the experiment.

The following are some key points about the person who took part in the experiment. The person:

In short, due to not having any previous relationship with SSRF, the subject was an ideal candidate for the experiment as any psychological effect from the presence of the Saint (such as feeling good due to knowing that the person was a Saint) could be ruled out.

Set up of the experiment

For this experiment, we used the DDFAO biofeedback machine to study the impact of the Saint on the Kunḍalinī chakras of the subject. The aspects we studied were:

3 Significance and relevance of such an experiment

Through spiritual research we have found that 30% of the world’s population are possessed by negative energies and another 50% are affected by them. People who are possessed by negative energies are especially in need of spiritual healing or some positive spiritual energy that can be generated through spiritual practice. A Saint is a beacon of Divine consciousness on Earth. By understanding the positive impact of Saints people will be better able to make decisions on which interactions they should hold as valuable.

4 The experiment to test the effect on a possessed person

A base line reading was taken of the subject. In the graph below, the results are displayed. The readings from left to right show what was recorded from the Crown chakra (Sahasrār-chakra) at the top of the head through to the Root chakra at the base of the spine. As you can see the readings are all substantially negative. 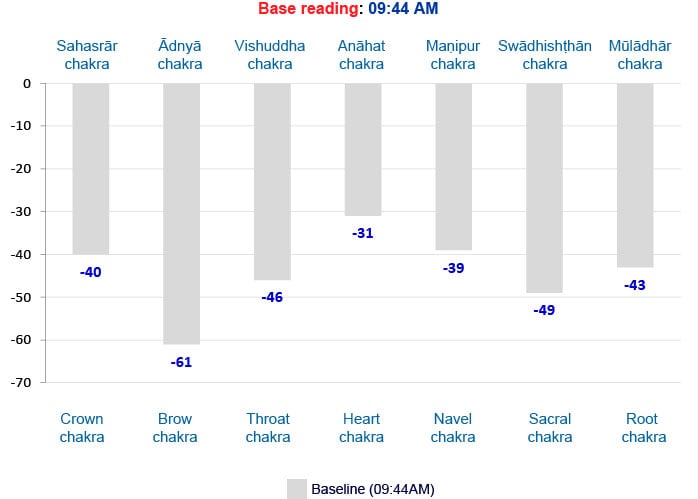 Through spiritual research we found that the negative energy possessing the subject had switched its place from the lower three chakras to the upper four chakras and deposited large amounts of negative energy. The negative energy in the person had done this in preparation to combat the positive spiritual energy of the Saint. Through its supernatural powers the possessing entity knew in advance about the nature of the experiment. As a result, when the baseline reading was taken, the upper four chakras had a more negative reading than the lower 3 chakras.

Soon after the baseline reading was taken, we asked the Saint to enter the room. The subject was unaware of the Saint’s presence and was also not aware that the person is a Saint. In spite of this, an immediate positive fluctuation in readings from the DDFAO were seen with the top 4 chakras becoming more positive. (The upper four chakras refer to the 4 bars on the left of the chart.) 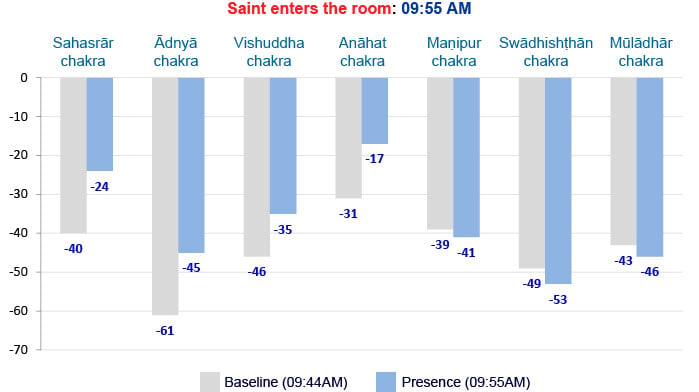 A Saint’s aura automatically positively affects people in the vicinity. In this case, the positivity in the form of Divine consciousness (Chaitanya) entered the subject through the Brahmarandhra which is a subtle opening in the spiritual energy system, located above the crown of one’s head and is a part of the subtle-body. From there the Divine consciousness entered the Crown chakra and flowed through the central channel of the spiritual energy flow system (Sushumnānāḍī). The  central channel extends from the base of the spine to the top of the head. The positive energy began to purify the top 4 chakras along the way and cleanse it of the black energy deposited there. A subtle battle ensued between the positive energy and negative energy.

The Saint was requested to look at the subject and the subject was also requested to look at the Saint. After 5 minutes another reading was taken and the upper four chakras showed increases in positivity. This was because of the continuous flow of Divine consciousness radiating from the Saint which resulted in further cleansing of the black energy in the upper four chakras. 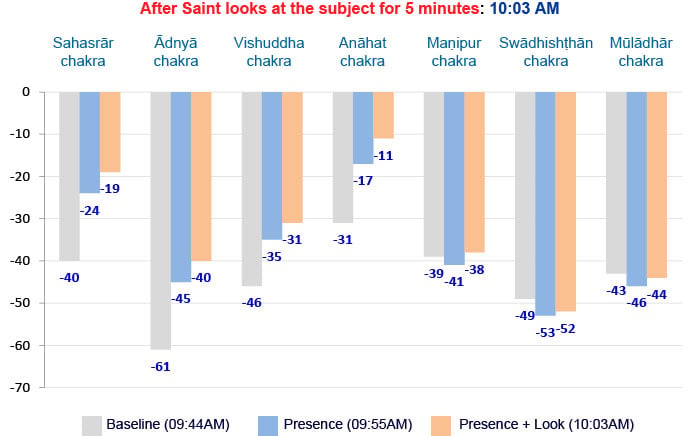 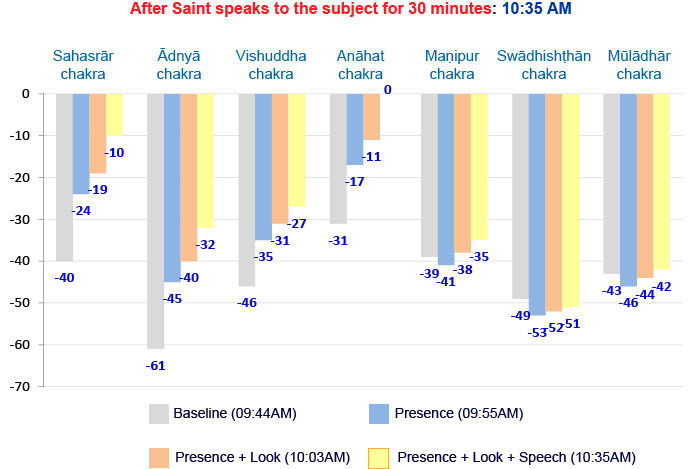 After the Saint spoke to the subject for 30 minutes, we observed that the readings of the top 4 chakras continue to become more positive. In fact, the readings of the Heart chakra (Anāhat-chakra) increased to zero from -31. The average increase in readings was +27 points across the top four chakras. However it is also observed that the lower three chakras where the possessing entity had established its presence and was residing continued to remain negative and there was barely any change.

The reason for this was that up to now the battle ground of the subtle battle was at the level of the upper four chakras. The positive energy was the dominant energy and nullified the black energy in the top four chakras. As a result, it’s downward motion to the lower three chakras had not yet begun.

At this stage the experiment was stopped and the subject was allowed to proceed with daily activities.

The 3 colour coded bars in the following graph shows the fluctuation in readings from the various stages of interaction during the experiment. 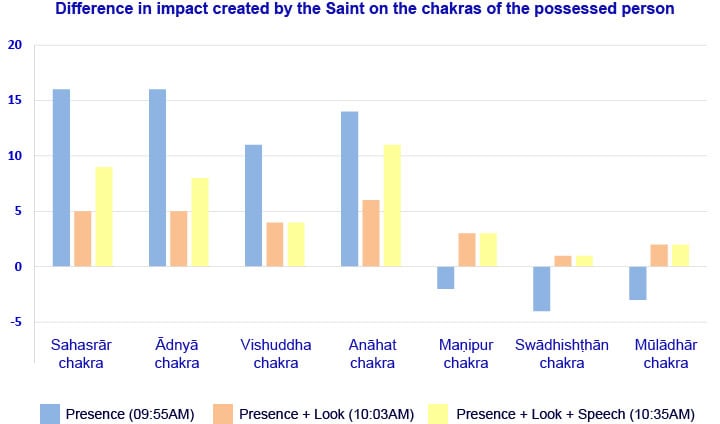 It shows that the ‘presence’ of the Saint in the room (Blue bar) had the greatest positive impact as compared to ‘presence + look’ (Peach colour bar) and ‘presence + look + speech’ (Yellow colour bar). It is also pertinent to note that the Saint had completed just 5 minutes in the room when the initial reading for just ‘presence’ was taken. As opposed to this, He spoke to the subject for 30 minutes and the positive impact was not as much.

That afternoon approximately 4 hours after the experiment, the chakra readings of the subject was taken once again in the absence of the Saint. We observed that in the top four chakras, there was a considerable reversal of the positivity they had gained during the experiment. However, the lower three chakras that initially recorded minimal change during the experiment had become substantially more positive. 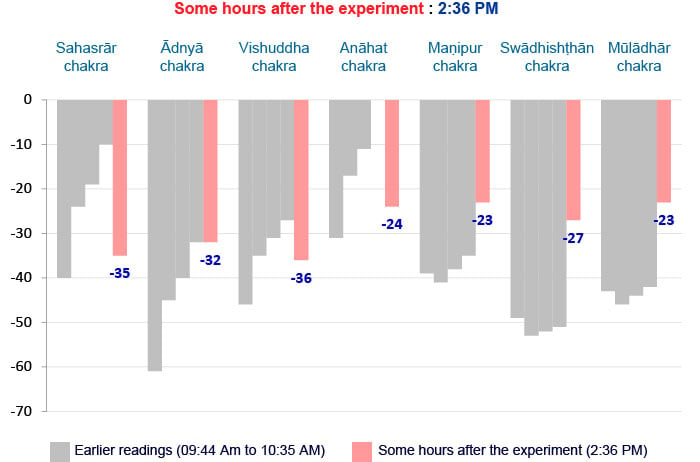 When we sought an explanation through spiritual research, this is what we discovered.

In the presence of Saints