Abstract: This article elaborates on when and why Divine particles began appearing on His Holiness Dr. Athavale’s body, how Divine particles appeared in other places due to the resolve of H.H. Dr. Athavale, the extent of their dissemination, their effect, the Spiritual science behind their appearance and their significance for mankind.

To learn about the uniqueness of the chemical structure of Divine particles, please see the results of laboratory analysis provided by Bhabha Atomic Research Centre (BARC) Mumbai and Indian Institute of Technology (IIT) Mumbai.

To understand this article we recommend you familiarise yourself with the following articles:

Since its beginnings, science has been in search for answers about the origins of the universe. In recent decades physicists have taken their research to underground laboratories that use complex scientific instruments to study the basic constituents of matter. A recent experiment at the European Organisation for Nuclear Research (CERN) institute using a particle accelerator attempted to confirm a theory of fundamental physics about the origin of mass in the Higgs particle.

On the other hand, since its inception the Spiritual Science Research Foundation (SSRF) has been dedicated to systematic research of the spiritual dimension. Due to the absence of limitations in spiritual research, SSRF has studied the causative factors of events not only in the physical world surrounding us, but in other planes of existence such as Heaven (Swarga), the Hell region (Pātāl) and beyond.

The spontaneous appearance of remarkably shiny, glittering particles at the SSRF research centre on 5th July 2012 that coincided with the presumed discovery of the Higgs boson (popularly referred to as the “God particle”) piqued our curiosity. As we went about collecting and studying the particles found at SSRF, we learnt about their special features and significance, which we are presenting in this article.

Ms. Kalyani Gangan, who was there, recollects:

“On 5th July 2012 at 7.30 pm, I entered H.H. Dr. Athavale’s room. At that time He said, ‘I will not be able to take a bath as my Vital energy is very low.’ I was doing service unto the Absolute Truth (satsēvā) while still contemplating on His statement. At that very moment He showed me a golden particle on His hand and said, ‘Such particles fall from my hand each day.’

The one I was gazing at was shining a lot. I was feeling very blissful while looking at it and I could see rays emanating from it. After a while He said, ‘We must collect these particles.’

After some time when He rubbed His hands against a diary, some particles fell down. They were radiant and shining like stars.” 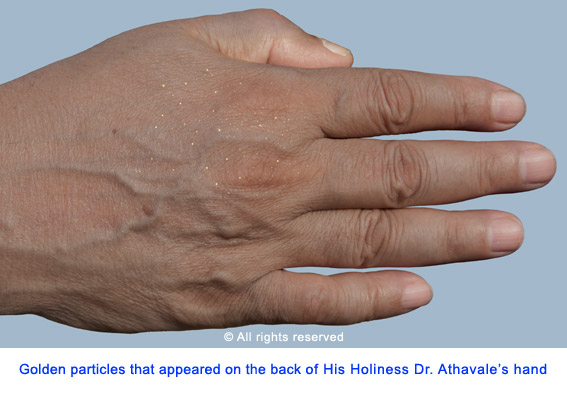 The next day such shiny particles appeared on the bodies of some seekers residing at the SSRF research centre and ashram in Ramnathi, Goa (India), on the chairs and tables of seekers performing service unto the Absolute Truth in their respective departments at the centre, and on the beds and floor of some of the seekers’ rooms.

On consecutive days, these shiny particles were seen by numerous seekers at their homes and in places where service unto the Absolute Truth is performed across India, as well as several places around the world.

3. Spiritual science behind the materialisation of Divine particles

When these shiny particles were analysed by seekers with an advanced sixth sense, it was found that the particles emit Divine power with positive energy.

These various Divine particles are necessary:

SSRF has used the gift of sixth sense or ESP of many of its seekers to gain an insight into the subtle-world and drawings based on subtle-knowledge are one of the tools we use. Mrs. Yoya Vallee from France is one such seeker.

Below is a drawing of the Divine particles based on subtle-knowledge that Mrs. Yoya Vallee drew:

From the drawing based on subtle-knowledge, one can understand that the particles attract the flow of a Divine principle. They also create and emit a ring of Bliss (Ānand). Non-materialised Divine consciousness (Chaitanya) is also attracted to them and the particles emit and activate this non-materialised Divine consciousness into the environment.

4. Meaning and function of various colours of Divine particles

As we continued our investigation, we found that the Divine particles did not all look the same.  The colours of Divine particles found ranged from mainly golden and silvery, to a few red, pink, orange, blue etc. After careful study, we learnt that Divine particles in each of these colours have some specific functions. Below we are listing some of them.

In summary, the various colours demonstrate the multifaceted nature of God’s Divine mission.

5. Source of the Divine particles

The significance of Saints from a spiritual perspective features prominently in SSRF’s research. The materialisation of Divine particles further confirms the importance of a Saint and Parātpar Guru (above the 90% spiritual level) like H.H. Dr. Athavale.

The spiritual evolution and the Divine qualities of H.H. Dr. Athavale cause Divine changes in Him. These changes have been occurring in Him from the year 2010 onwards and are seen on His body, skin, hair and nails. For example: Divine signs like the sign of “Om”, lotus flower etc. had developed on His body. Also, His skin had developed a yellowish hue, His nails had turned yellow due to Divine consciousness in them etc.

Now, Divine particles are being released from His skin.

5.2 Divine particles appear in the vicinity of individuals with a higher spiritual level and in places where there is more Divine consciousness

Divine particles were found on the objects and clothes used by Saints, seekers at a spiritual level of 60% or more and seekers who have spiritual emotion and/or intense desire for God-realisation. They were also found on some spiritual periodicals and on Holy texts. 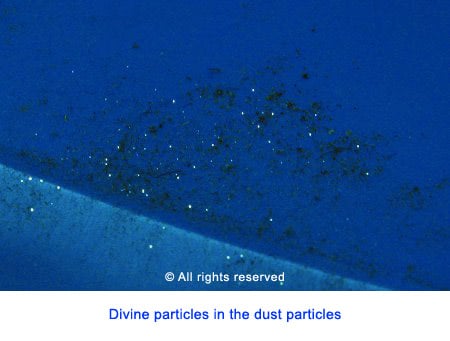 They were also found on the faces and hair of child seekers who have descended to Earth from Heaven or the regions higher than Heaven like Maharlok which are the regions of the afterlife. Since these children are young and have very few subconscious impressions compared to grown-ups, they are more Sattva-predominant.

Therefore, Divine particles are showered or float in places where there is a higher level of the Sattva component.

5.3. Divine particles appear as necessary to achieve a specific purpose

In some cases, Divine particles appear as needed in order to accomplish a specific purpose. For example:

One day H.H. Dr. Athavale had kept nine files and five magazines arranged one over the other for reading priority-wise. The next morning when He picked up the magazine that was on top of the stack for reading He saw golden particles on its surface. When He checked the next magazine in the stack, He found 15-20 Divine particles on it as well. When He thoroughly checked all the documents in the stack he found the radiant particles on the surface of each magazine and file. This means that Divine particles can form in places where there is no open surface. Rather than showering down from the atmosphere, such particles are formed by the solidification of Divine consciousness present in those places. 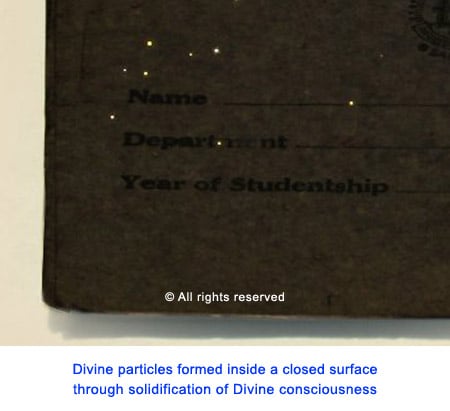 The Divinity of God first manifests itself through the medium of H.H. Dr. Athavale and the seekers realise this Divinity through His medium. Once they have such a spiritual experience they are also able to experience it elsewhere.

6. Changes in and special features of Divine particles

During the course of our investigation, we encountered some changes in Divine particles over time. Here we present some of the changes observed, along with the explanation obtained through spiritual research.

Question: Why did Divine particles on H.H. Dr. Athavale’s skin reduce in number and size on the second day?

Since the golden particles formed in the skin were discharged along with the upper layer of H.H. Dr. Athavale’s skin, their light was dispersed quickly into the environment. Therefore, the luminosity and number of golden particles reduced.  All this happens only as per the will of God and as per the specific purpose involved.

Question: What happens to Divine particles that are discharged along with the upper layer of H.H. Dr. Athavale’s skin? 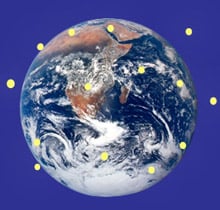 When the golden particles that are formed in the skin are discharged along with the upper layer of skin and if the manifest (visible) light present in the particle is in an active state, the particle is attracted towards the Earth and collects there. The luminous Absolute Fire Principle (Tējtattva) creates a covering on the Earth (ground), which purifies the land and venue where spiritual activity takes place.

The appearance of Divine particles is a unique and spiritually historic event in the current era.

Since the physical battle between good and evil is going to begin after the year 2012, God is empowering seekers with Divine strength in the multifaceted form of manifest (visible) luminous Divine particles through the medium of a Saint of the highest order, H.H. Dr. Athavale. In this process, mostly golden, blue and white particles will appear for the sake of collective spiritual practice for the spread of Spirituality.

The times we live in are very significant as the ramifications of the battle between good and evil will be felt by the entire universe. However the current times are also highly conducive for spiritual growth. Spiritual practice that is according to the six basic principles of spiritual practice is a sure way to increase the Sattva component in oneself and also to gain a higher level of protection from God.

Quote of H.H. Dr. Athavale renouncing any doership for this unique event “‘This has occurred because of me, yet I have not done it’ – is a quote by His Holiness Dnyaneshwar. I realised this particularly with respect to the particles of Divine consciousness. Though these Divine particles were seen all over the SSRF Research center in materialised, visible form because of me, I myself had not created them.” – H.H. Dr. Athavale
Related blogs: